A Road To Nowhere

Leeches clung to us as we wound our way through tall trees, dense bamboo clumps and shrubbery of the Dailong Biodiversity Heritage Site. Walking over a thick carpet of leaf litter, we saw all manner of insects, arachnids and other ‘creepy-crawlies’ that are the gardeners of our precious Eden. We were there in August 2017, to meet local community members to consult with them on conservation issues in Dailong, the only village in the Tamenglong district of Manipur that chose to carve out a small area of 11.35 sq. km. as a community-owned biodiversity site under the Biological Diversity Act, 2002. Once a hub for hunters, Tamenglong is undergoing a transformation, thanks to the reformed outlook of village chiefs and many young educated Naga women and men determined to protect the diverse natural heritage that gave rise to their cultures.

Tamenglong is fascinating, not only for its rich biodiversity, but also on account of its friendly, cheerful and hard-working residents. Tribes such as Zeliangrong Naga (comprising Rongmei, Liangmei, Zemei and Inpui) and Kukis, inhabit the biodiverse hills together with Hmars, Chirus and Khasis. The district comprises 215 villages with around 1.5 lakh residents. The hill folk practice agriculture and their literacy rate is as high as 70 per cent. 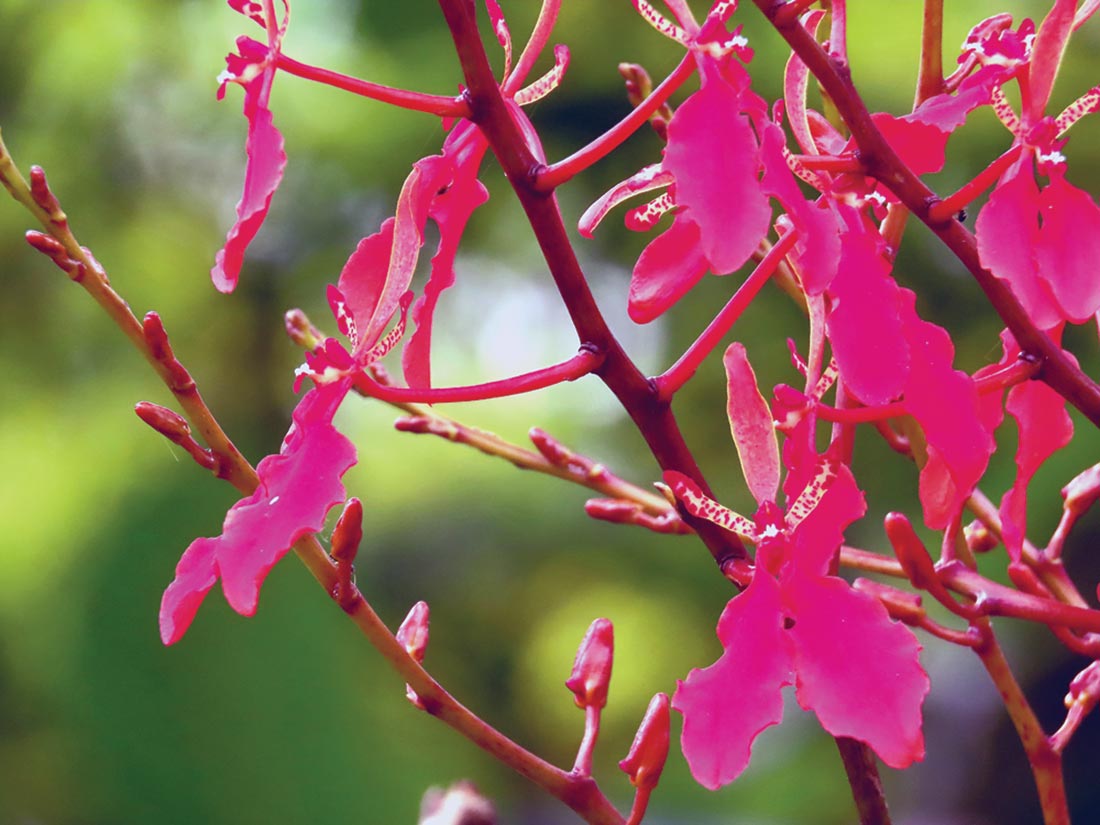 The forests of Tamenglong harbour varied and stunning flora. The glorious crimson blooms of the endangered red vanda plant bloom between April and May. It is restricted to Manipur and its neighbouring regions and is locally known as Kwaklei angangba in Manipuri. Photo: Kedar Gore.

The area is hilly with few flat lands, and jhum or shifting cultivation has been a widely accepted way of farming for decades. Most of Tamenglong’s hills and forests are directly controlled by the village councils and large areas have been cleared of native forests and converted to jhum fields to meet peoples‘ food requirements. According to the village elders, at one time the jhum cycles used to range between 10 and 15 years, but in recent years the burn cycle has been reduced to three to five years. This is hugely significant since longer fallow periods allow the accumulation of forest floor litter, which in turn results in higher soil nutrients and functional carbon, potassium and nitrogen cycles. Back in the day, the elders informed us, turmeric, ginger and tapioca were the main crops, cultivated with rice. Today, cash crops including chili, maize, melon, cucumber, okra, pumpkin, brinjal, yam, beans, and garlic are the order of the day as stipulated by market demands.

Abandoned jhum fields or sites with longer fallow periods have been observed being increasingly colonised by bamboo, and this has adversely affected the biodiversity. Ornithologists confirm, however, that bamboo greatly benefits the Amur Falcon Falco amurensis. These incredible raptors are long-distance migratory travellers from China and Siberia that use parts of the Tamenglong district (and other northeastern states) as staging grounds en route to southern and eastern Africa. The Manipur Forest Department and Wildlife Institute of India have tagged two Amur Falcons in 2020 and are currently monitoring their migratory routes to better understand how to come up with international conservation strategies. 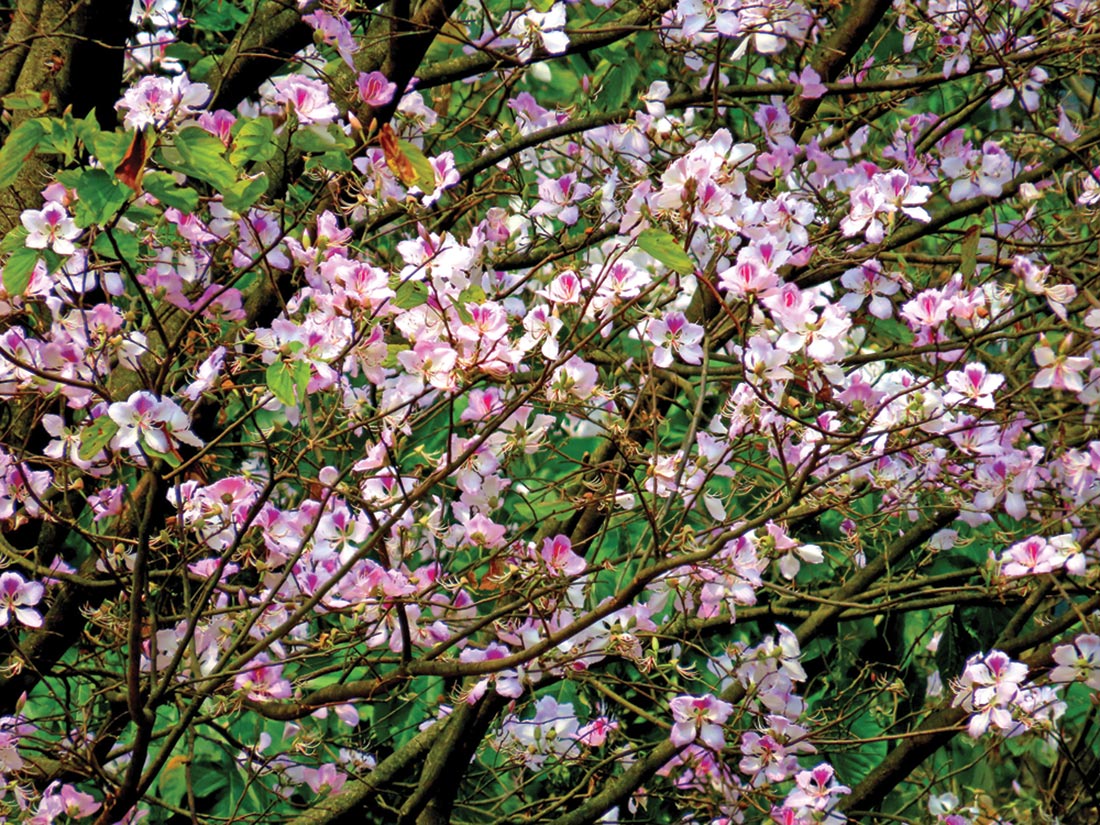 Amur Falcons used to be hunted indiscriminately until a few years ago, but consistent conservation programmes implemented by the Rainforest Club Tamenglong, The Corbett Foundation and the Manipur Forest Department have ushered in positive changes in the outlook of local Naga youth, who now see these birds not as a food source, but as key ‘magnets’ for nature-based tourism. Increasingly, Naga community members have given up their traditional hunting practices, alarmed at the rate at which their once-abundant biodiversity has dwindled. Alongside this, alternative livelihoods such as bee-keeping, poultry farming, fishery, organic farming, and the creation of handloom, bamboo and cane handicrafts are on the rise. These supplement nature-based, adventure and cultural tourism. Combined, we have every reason to believe that the economic status of locals will be greatly enhanced, even as their ecological heritage slowly returns to a measure of its former glory. 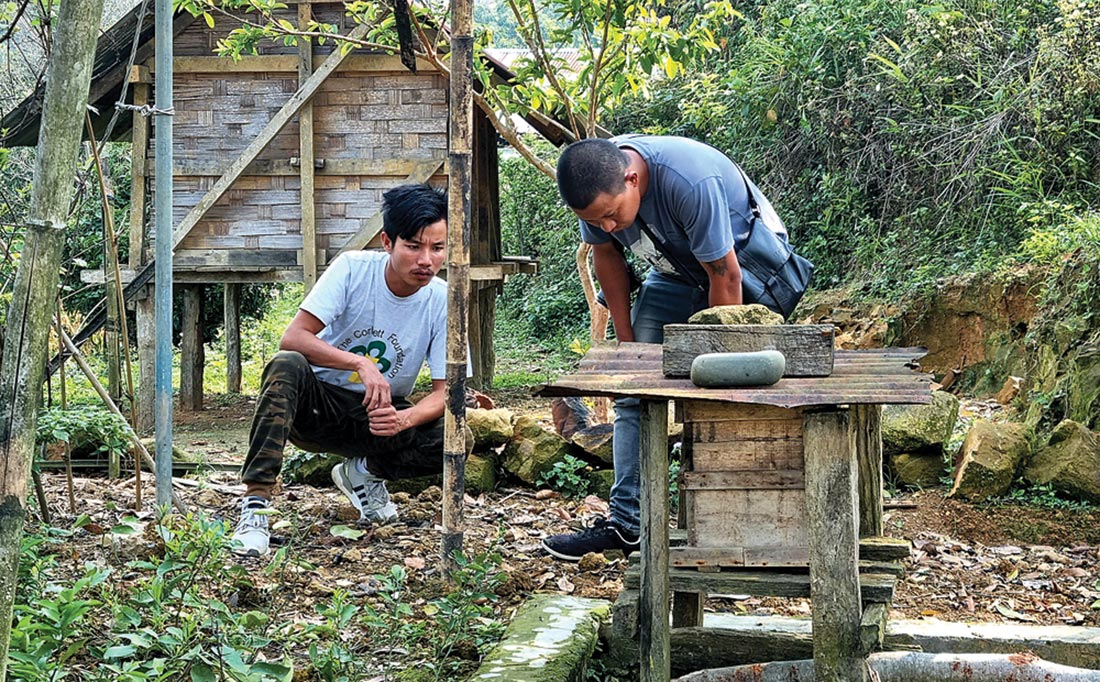 However, there are several areas in Tamenglong that have lost their forest cover at the hands of timber felling and unsustainable jhum cultivation. Satellite maps confirm that Manipur lost a massive 748 sq. km. of forest cover between 2017 and 2021 (according to the India State of Forest Reports of 2019 and 2021), and that a huge chunk of 108 sq. km. has vanished in Tamenglong district alone (Government of Manipur, 2021).

Just a few months ago, in April 2022, we were heartbroken to witness what can only be called a forest massacre resulting from a 270 km. long highway being constructed by the National Highways and Infrastructure Development Corporation Limited. The alignment connects Mahur in Assam with Imphal in Manipur, and slices through the dense forests of Tamenglong, most of which are owned by the community… some under the jurisdiction of the Forest Department.

The remote and hilly district of Tamenglong, in the Naga hills of Manipur, is a biodiversity haven. On a recent visit, the authors were devastated to see vast swathes of this pristine forest being mowed down for the construction of an ill-advised road. Photo: Kedar Gore.

Knowing what we know about the connection between the climate crisis and deforestation, this is particularly disturbing. Documents reveal that 431 ha. of Forest Department-controlled forest land with over 60,000 trees were ‘given over’ for road construction between Tamenglong and the Mandeu-Jiri river. This biodiverse wonderland is a part of the Jiri-Makru Wildlife Sanctuary (198 sq. km.), plus the Eco-sensitive Zones of the Jiri-Makru Wildlife Sanctuary and the Zeilad Lake Wildlife Sanctuary (21 sq. km.) (see map on page 55). These sanctuaries were, however, declared without obtaining the obligatory consent of the local communities. An official document published by the Manipur Forest Department makes mention of the following species in these two sanctuaries: Hoolock gibbon, spotted linsang, barking deer, sambar, leopard, Chinese pangolin, wild pig, jungle cat, yellow-throated marten, fishing cat, serow, slow loris, hog badger, tiger and (seasonally) wild elephants from Assam that cross over from the Barak river. As has been their wont for decades, those seeking environment clearances for this road project only mentioned the presence of jungle cats, flying squirrels and monitor lizards, adding that there would only be a ‘minimal’ impact on the wildlife habitats and corridors of any of these Protected Areas.

This defies reason and future generations will surely wonder at the shortsightedness of our generation for willingly sacrificing their life-supporting infrastructures, merely to get from one place to the other in a hurry.

A part of this road also passes along the boundary of Dailong Biodiversity Heritage Site and cuts through the Dailong Community Forest. Although the biodiversity richness of this site has been aptly highlighted by the Manipur Biodiversity Board in 2016 (which is why it was declared as the Dailong Biodiversity Heritage Site), there has been no mention of these critical qualities in the environmental clearances. Worse, no suitable mitigation measures have been recommended, despite suggestions made by the Wildlife Institute of India, Ministry of Environment, Forest and Climate Change, National Highways Authority of India and National Tiger Conservation Authority in 2016 (‘Eco-friendly Measures to Mitigate Impacts of Linear Infrastructure on Wildlife’). Similar mitigation measures have been successfully implemented in wildlife and forest areas across India. 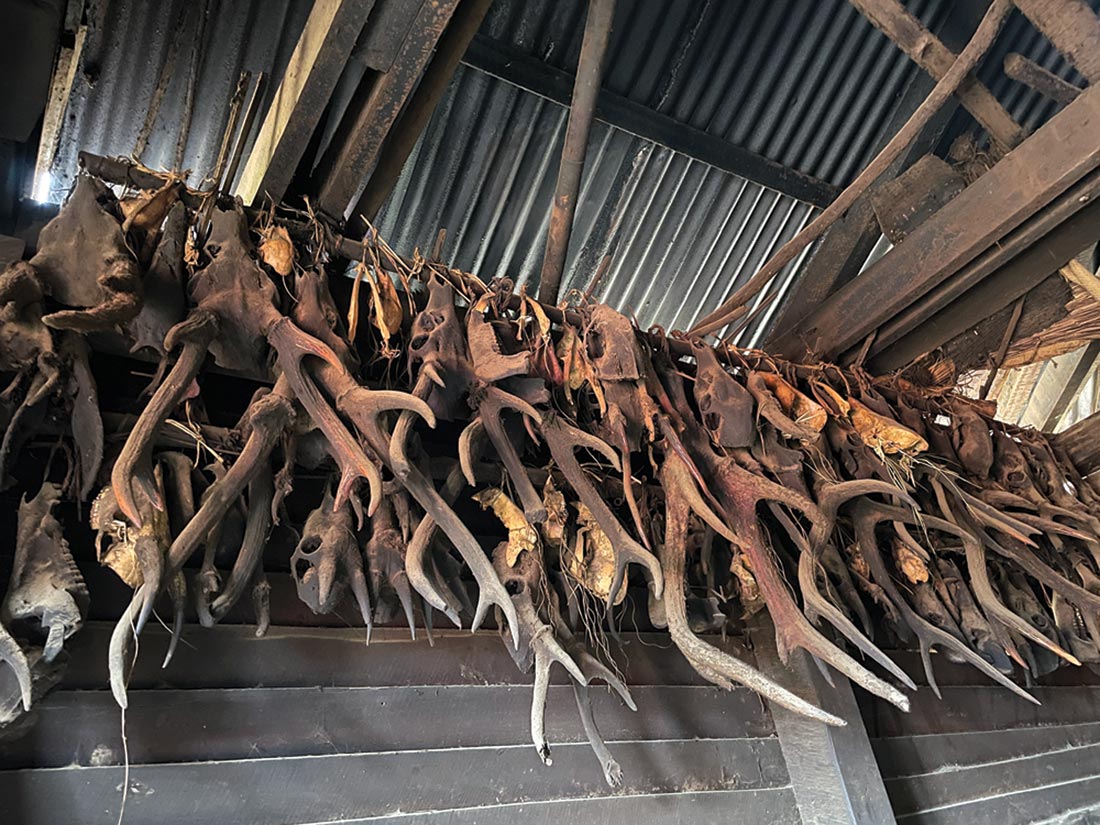 The only conditions mentioned in the environmental clearances are ‘muck clearance’ after the excavation and monetary compensation towards the cost of Net Present Value of the forests that are lost together with compensatory afforestation. Even these inadequate conditions have been blatantly violated as evidenced by the dumping of excavated soil and rocks down the hill slopes, causing still further habitat loss of bamboo, shrubs, herbs, and climbers, along with their associated fauna… all buried under massive quantities of soil, rock and debris. Predictably, streams, waterfalls and jhum fields have been choked by loosened mud and rock, much of which will ultimately reach the large rivers Barak, Irang, Iring, and Ijei. If this were not bad enough, the new road falls under the Seismic Zone V, susceptible to major earthquakes according to the seismic zone map of India (IS 1893 - Part I: 2002). This was unambiguously highlighted in the (draft) Environment Impact Assessment report prepared by the Public Works Department in December 2014 for this very road project. Tragically little thought has been given to dealing with such natural catastrophes that could trigger large-scale landslides and further destabilise the already fragile ecosystem of Tamenglong Hills, as was seen in Haflong, Assam in May 2022 when flash floods led to large-scale devastation, apparently due to the cutting of hills for road projects and other unsustainable development.

A map showing the road alignment between Mahur in Assam and Tamenglong in Manipur, that cuts through dense forests of Tamenglong mostly owned by community members. The construction and its side effects – soil erosion, landslides triggering flash floods and loss of habitat – will negatively impact the region’s biodiversity, food and water security for years to come. Photo: Kedar Gore.

Nevertheless, the Mahur-Imphal road is being projected as ‘essential’ for national security and international trade. Most of the land was acquired from the village chiefs, without paying them any compensation. While road infrastructure is necessary, the deep negative impacts of this large-scale road project on the water, food and ecological security of Tamenglong Hills has been underestimated and could negate any hope we have of securing the quality of life of our people. The loss is irreparable and inexplicable because another road connecting Tamenglong to Mandeu and Imphal to Tamenglong already exists and could be made functional by repair and maintenance, after years of neglect. Ironically, most stretches on the existing road become unmotorable, for almost six months in a year, and are a nightmare for those seeking to access remote villages such as Bhalok, Haochang, Azuram, Puching, Mandeu, Phalong and Diluan. It would have surely been easier, and more cost-effective, with minimal damage to the forest ecosystem, if such critical decisions were taken in consultation with ecologists, geologists, social scientists and not just civil engineers.

With so much emphasis being given to linear infrastructure projects across India, right-thinking people working for the long-term interests of our country ought to question the need for such mega projects. Their cost-benefit analysis must surely factor in the ecological and environmental losses incurred.

In our view, the protection of our ecological treasures like Tamenglong is of paramount importance and undervaluing the worth of such natural assets will end up eroding, not consolidating, our national security.

Kedar Gore, Director, The Corbett Foundation (TCF), is a fine naturalist and conservationist actively involved in conservation of India’s wildlife and wildernesses for over two decades. Dr. Naveen Pandey, Deputy Director and Veterinary Advisor for TCF in Kaziranga, is a conservation medicine professional and One Health expert. Mordecai Panmei, naturalist with TCF, is an active member of The Rainforest Club, Tamenglong, and an alumni of The Green Hub. Asangle Disong, also with TCF, works with women in preserving traditional knowledge and also with youth in volunteer groups for conservation.