A herd of cattle grazes on tiny bamboo shoots and other scant vegetation amid thin stumps of felled trees in the buffer zone of the Bandhavgarh Tiger Reserve in Central India. A dark grey bull wears a collar that encases a GPS device, and wanders not far from the carcass of another bull, killed by a tiger a week ago. The carcass, now drying up, lies within the vicinity of a wire-mesh fence, the other side of which, falls under the ‘core zone’ of the reserve. A few hundred metres ahead, the fence is replaced by a one-metre-high loose stone wall, over which a wild pig jumps to graze in an almost-parched paddy field. In the grazing area of another ‘buffer zone’ village, a thin stream meanders through a lush meadow. Water and grass are the lifeblood of all herbivores – domestic and wild. Heaps of cattle dung are seen alongside sambar deer pellets. 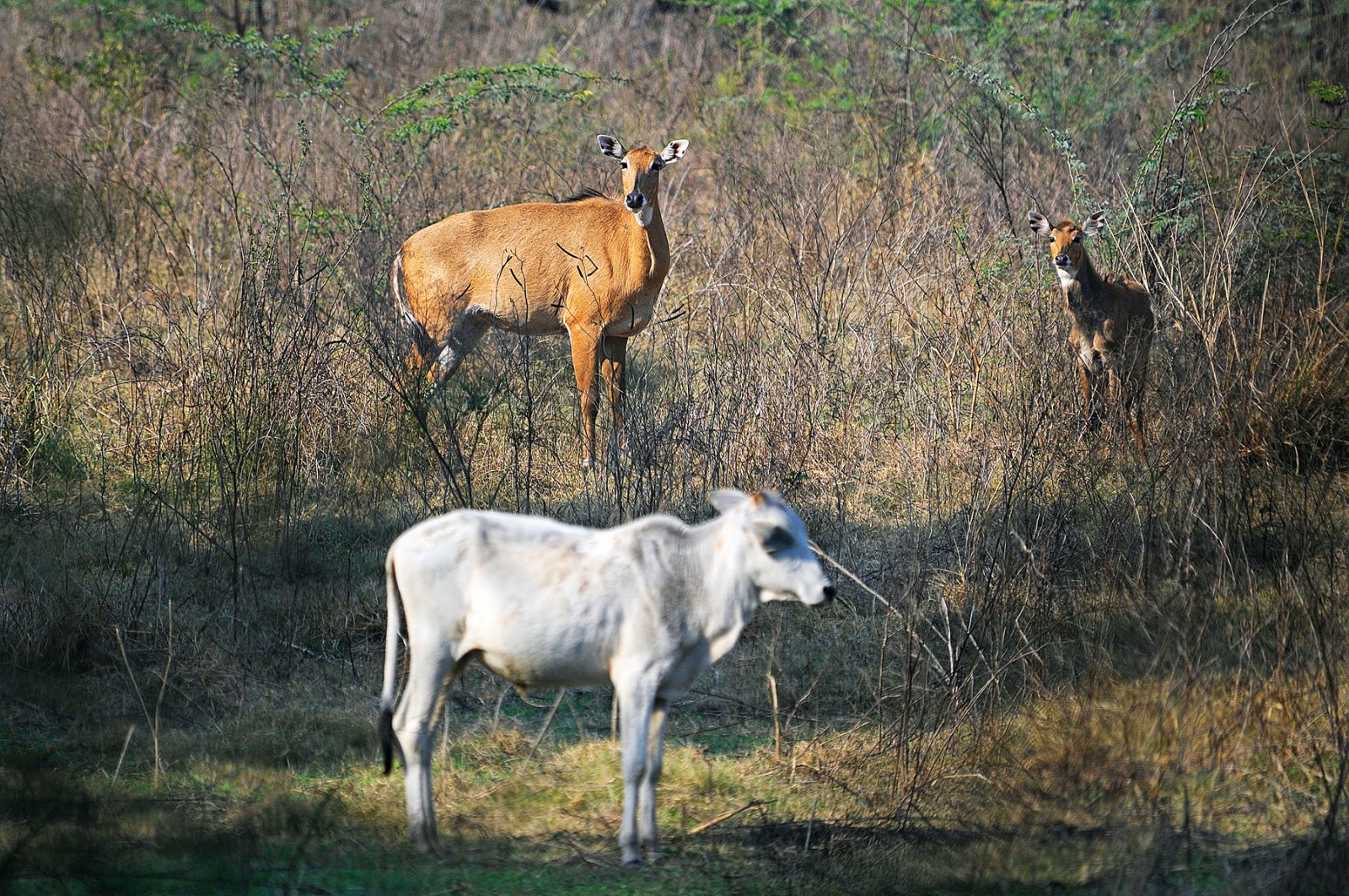 Wildlife veterinarians concerned with trans-species spread of disease dread scenes like these, and call this kind of proximity ‘spatial overlap’, which leads to inter-species pathogen transmission and the spread of diseases like the foot-and-mouth disease (FMD), rabies, anthrax, brucellosis and bovine tuberculosis, which are ‘reciprocally transmissible’ between cattle and wild herbivores.

Grazing areas and sources of water become hotbeds of disease transmission; and when villages with high densities of cattle surround forests that harbour wild herbivores, the risk increases manifold. “Bandhavgarh is surrounded by around 130 villages,” informs Dr. Nitin Gupta, veterinary officer at the reserve, “And out of those, 10 villages are in the core zone. The livestock population of just these 10 villages is estimated at around 8,000. This is not a small number.” Speaking of the reserve’s porous boundaries, he explains how the interface between the wild and the domestic cannot be controlled. “Wild animals sometimes venture into village lands, and domestic animals enter the forest. Water and food resources are shared at many locations; and domestic animals are prone to many diseases, especially FMD, so the risk of transmission always looms large.” 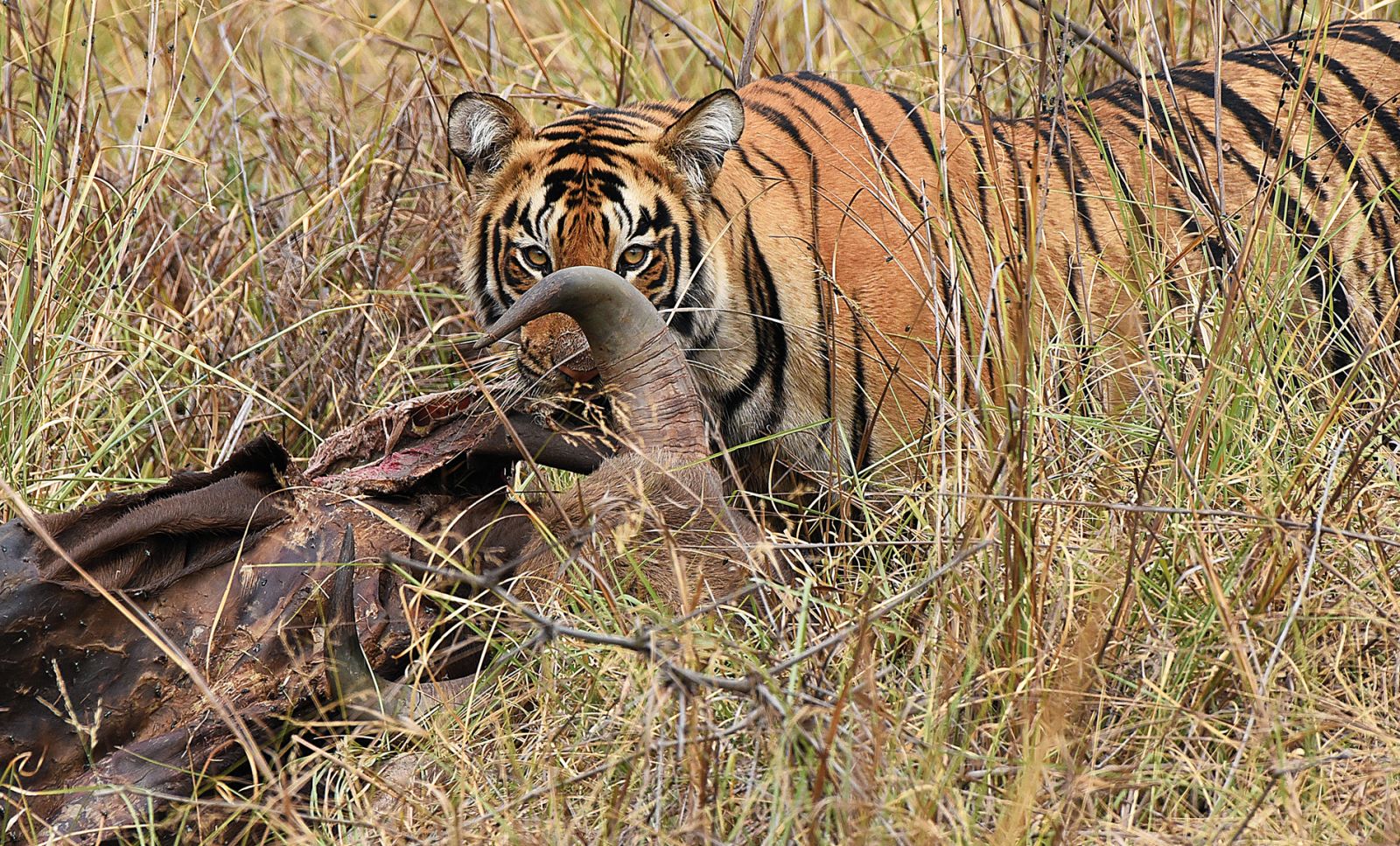 The gaur is an important prey species for the tiger. Decline in gaur populations can eventually lead to an increase in livestock predation by tigers, and bring them uncomfortably close to humans. Photo: Dr. Anish Andheria

To assess the risk of such disease transmission, it is essential to assess the prevalence of infectious diseases in cattle populations that come in contact with wild herbivores. The National Wildlife Action Plan (2017-31) highlights the need to maintain surveillance for both endemic and emerging diseases, and counter the potential spread of zoonotic diseases by way of interactions between wild animals, humans and domestic animals. 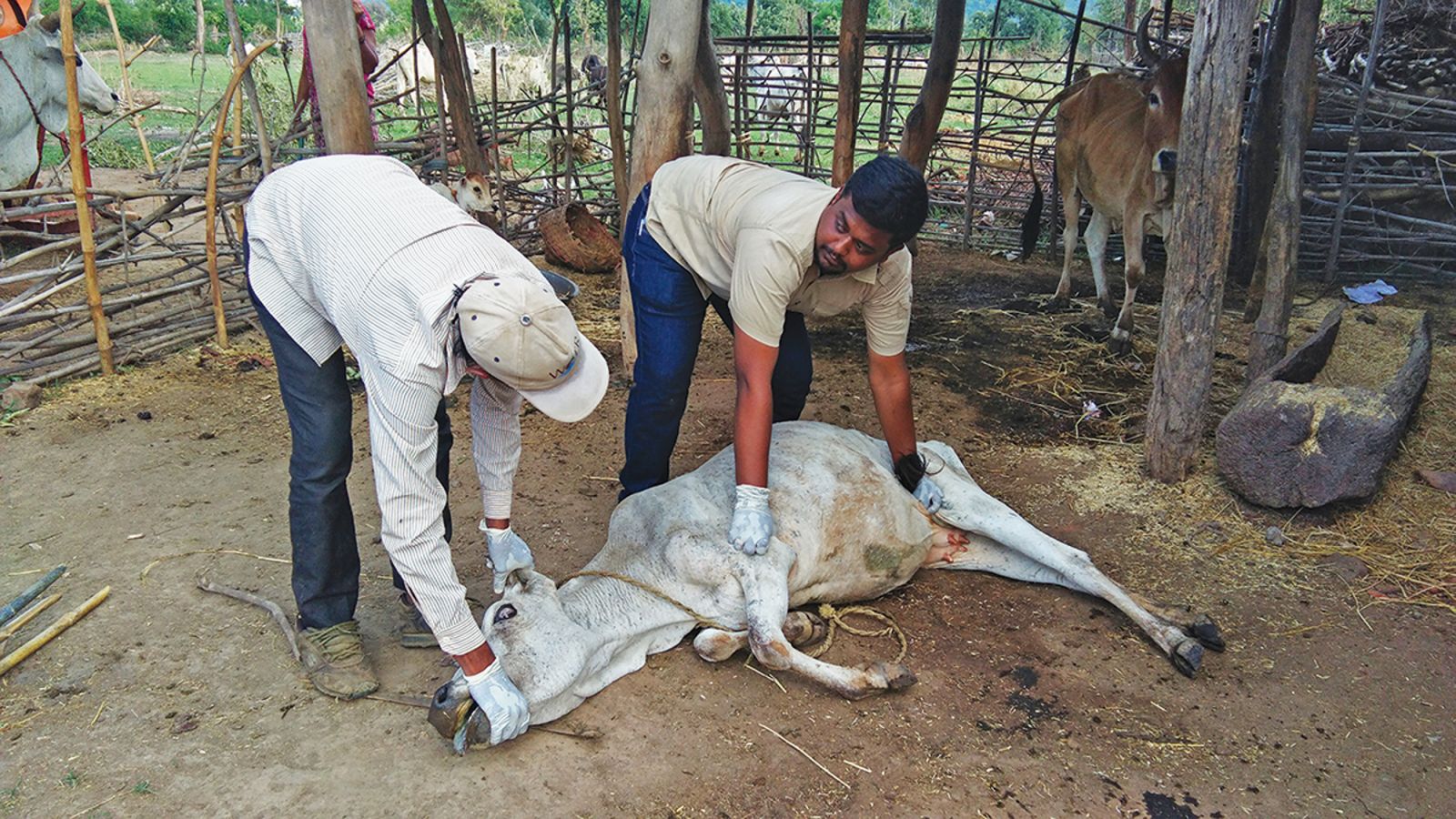 “We are developing a comprehensive disease surveillance model that will not merely indicate the prevalence of infectious diseases, but also identify the routes of transmission,” says Dr. Himanshu Joshi, wildlife veterinarian in-charge of the project with the Wildlife Conservation Trust (WCT). To assess the ‘infection load’ and spread of diseases, Dr. Joshi and his team conduct periodic surveys to estimate cattle populations, collect blood samples from cattle and wild herbivores (during post-mortems of animals that die due to natural causes or road accidents), and get the samples analysed for prevalence of diseases. These efforts are aimed at creating a baseline on the prevalence of FMD in the region, investigating the cause of mortalities of wild herbivores, and finding ways to reduce the interface between wild and domestic animals. The project is being executed in collaboration with the Madhya Pradesh Forest Department, the Animal Husbandry Department, and the Project Directorate on Foot and Mouth Disease. This will eventually result in developing standard operating procedures to monitor, diagnose, treat and contain diseases before they metamorphose into epidemics. 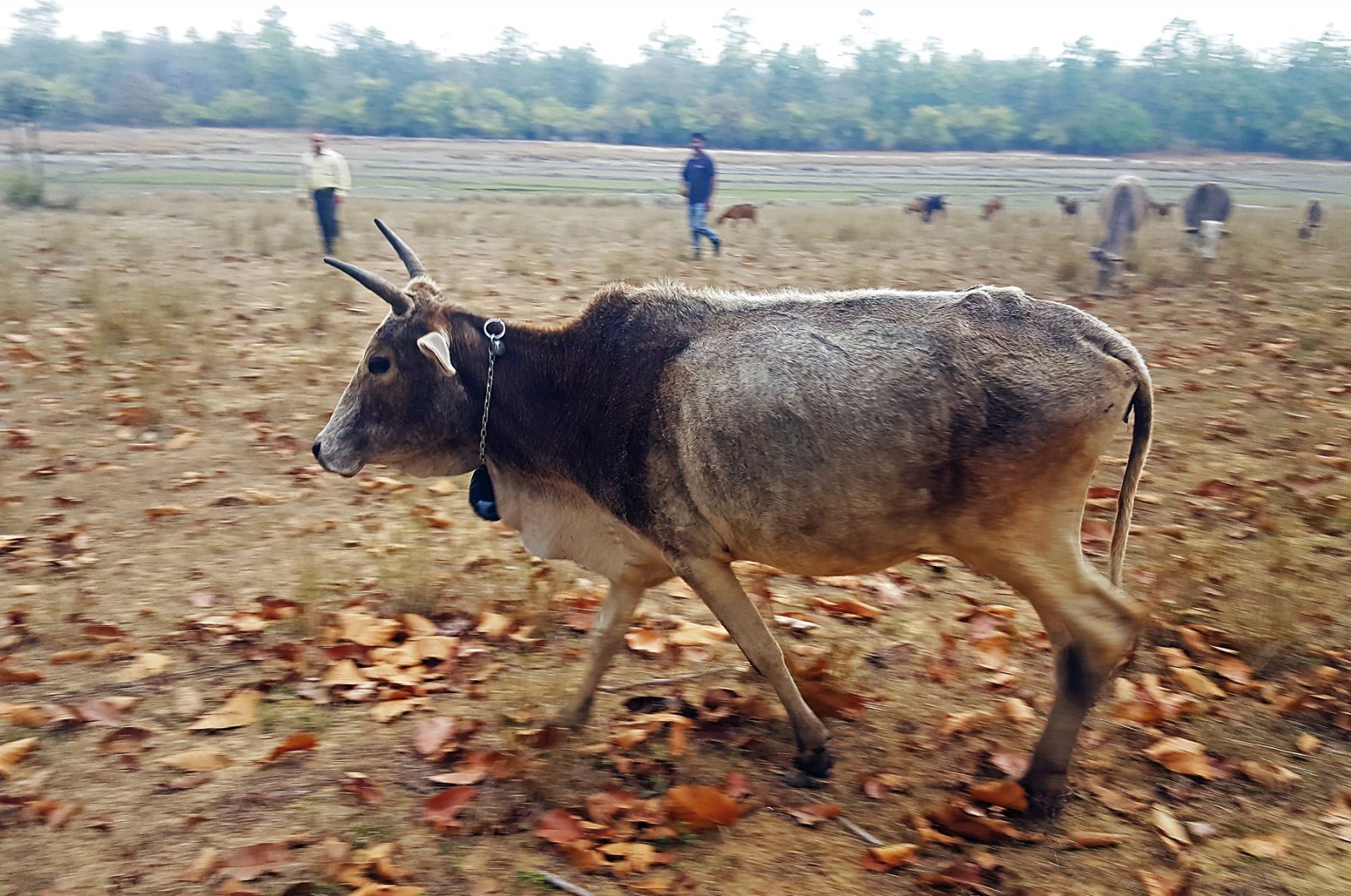 Collaring cattle with GPS devices is part of the effort to understand the extent of interactions between livestock and wild herbivores in the buffer zone, and identify the routes and mediums of transmission. Among the wild herbivores of Bandhavgarh, the species most vulnerable to disease is the gaur. Some individuals from the population have been radio-collared by the M.P. Forest Department in collaboration with the Wildlife Institute of India (WII). “Data on gaur movement can be overlaid on the GPS tracks of cattle to help understand spatial overlap and disease transmission probability,” explains Dr. Joshi. 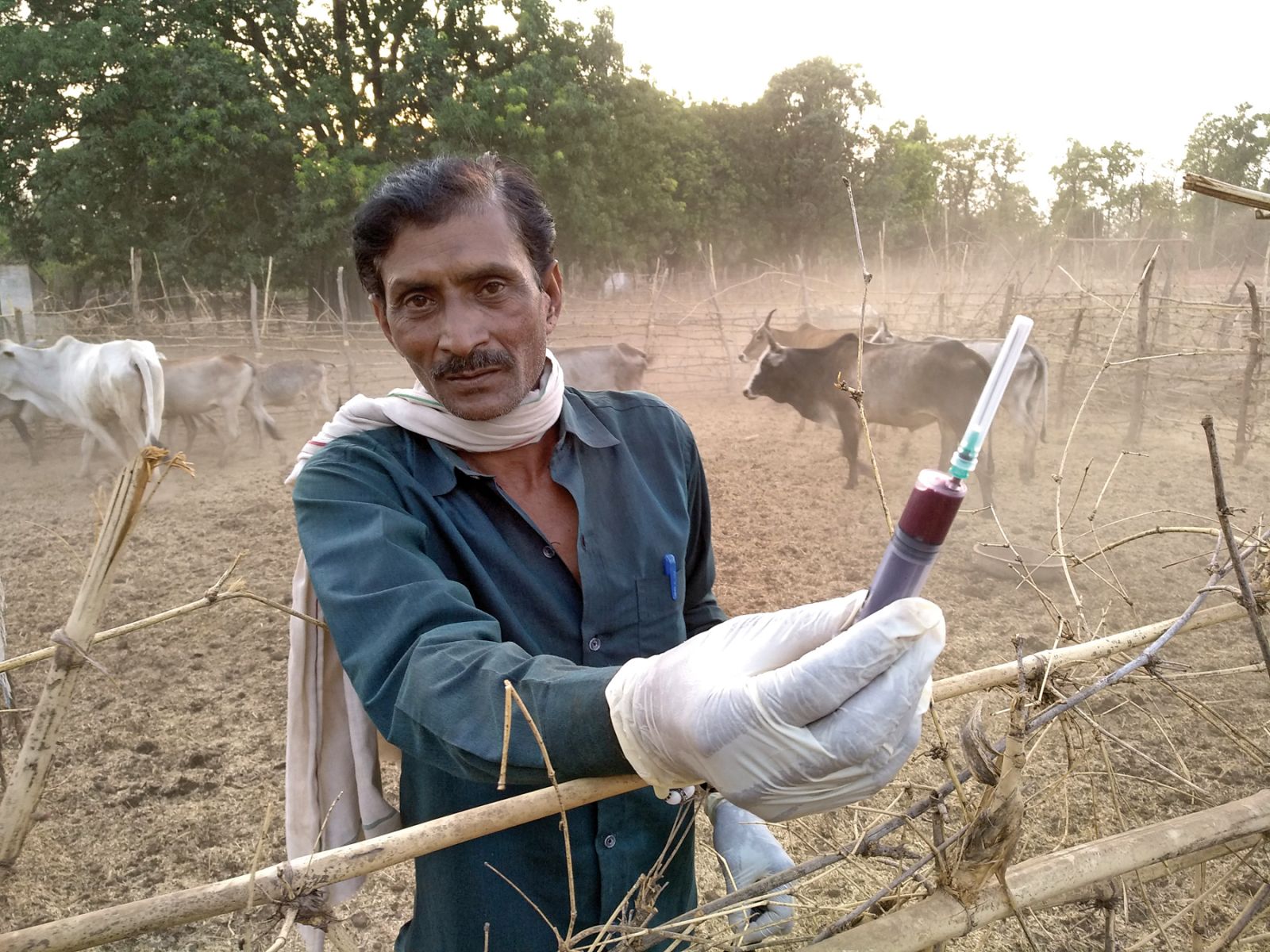 The current gaur population in Bandhavgarh are the progeny of 50 individuals that were brought here in 2011-12 from the Kanha Tiger Reserve, after the species went extinct from Bandhavgarh around 1998. The reintroduction report published in 2011 attributes ‘disease or accident’ as the cause of the ‘almost sudden’ disappearance of the species from the reserve. Experts believe that gaur are more prone to infectious diseases due to their genetic similarity to cattle. Past records also indicate that gaur populations have succumbed to epidemics of FMD, rinderpest and anthrax.

LIVESTOCK IS A REFLECTION OF THE WILD

“Etiological agents (bacteria, viruses, fungi, parasites, and the like) don’t fuss over whether the host is wild or domestic; so, the health of livestock is a reflection of the health of the wild,” explains Dr. Joshi. “We cannot mass-vaccinate wild animals,” adds Dr. Gupta. However, sampling cattle for diseases comes with its own set of challenges, the biggest of which are misconceptions of animal owners about medical procedures performed on their animals, and the lack of trust between communities and the agencies involved.

“Jitna vishwaas aap devi devta par karte ho, utna vishwaas aapko vigyaan par bhi karna padega,”(You should place as much trust in science as you do in religion), says Dr. Vinay Pandey in a persuasive tone. He makes this appeal several times in a day during the sampling season. Also a wildlife veterinarian with WCT, Dr. Pandey doubles up as a myth-buster. For Dr. Joshi and Dr. Pandey, work starts in the wee hours (as animals are let out early for grazing) in the sampling season. But they often face rejection and indifference from cattle owners. “They have been victims of veterinary quackery in the past, and have lost animals to diseases that were curable”, informs Dr. Pandey. “Also, there have been some natural deaths post vaccinations. These were just coincidences, but cattle owners attributed the deaths to vaccinations, and they now fear the needle and syringe, even if used only to collect 5 milliliters of blood. It’s a challenge, but we are trying to restore their faith in medicine.” A majority of livestock found around Bandhavgarh appear weak, and are unproductive. “Awareness about animal health is a slow process. We are getting them interested in artificial insemination so that the productivity, especially milk production, can be enhanced,” says Dr. M.K. Dwivedi, Veterinary Extension Officer with the Madhya Pradesh Animal Husbandry Department. 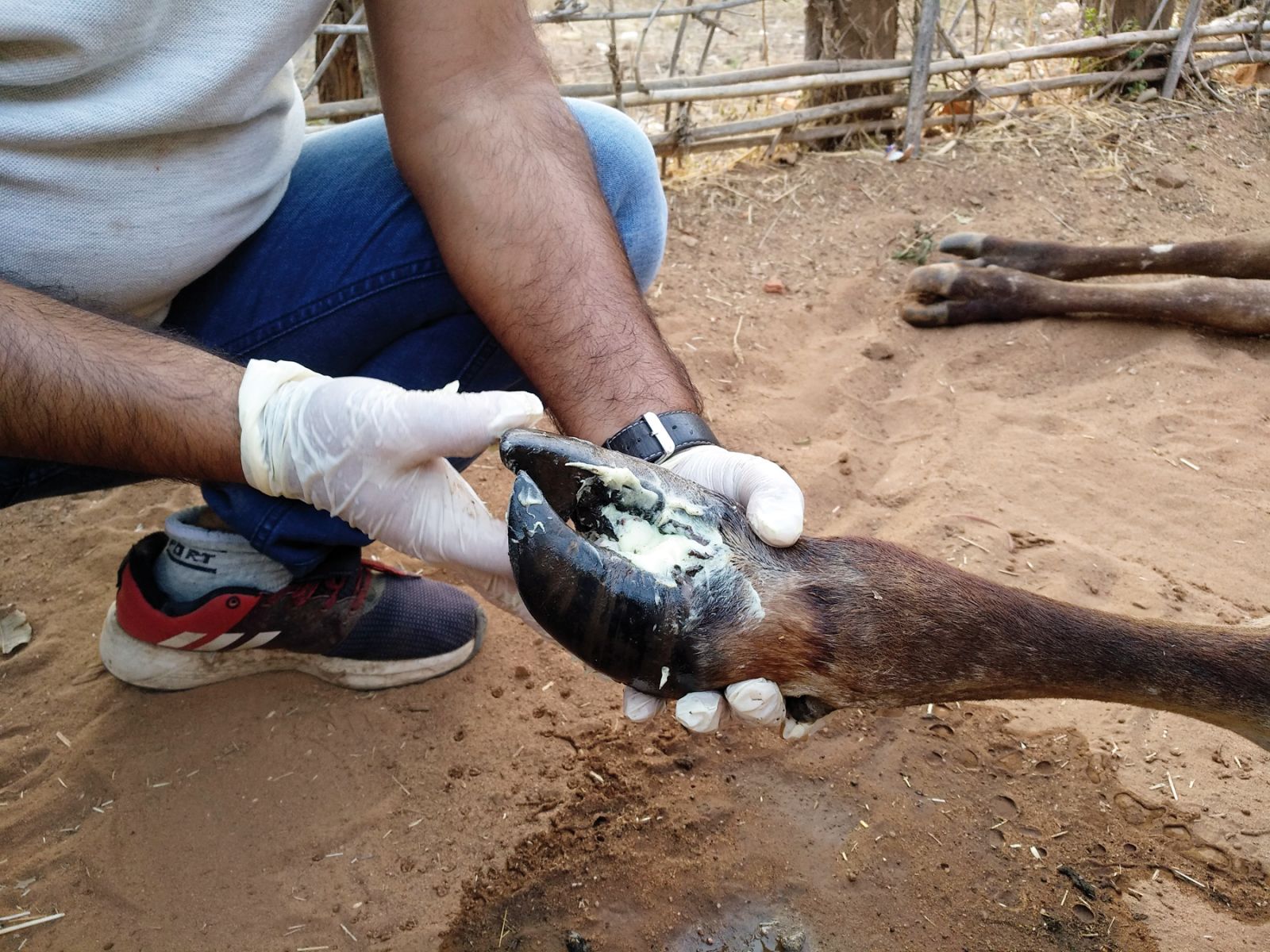 On almost all the cattle grazing around the forests of Bandhavgarh, one can count all the ribs and the protruding pelvic bones. It reflects the bigger picture of the majority of India’s free-range cattle – weak, unproductive, and disease-prone. With the lack or non-existence of grasslands, unavailability of quality fodder, and poor livestock management practices, these animals exert immense pressure on forests, and compete with wild herbivores for resources. But the direst threat is of disease spillover. “It builds up silently, like an undercurrent; and when it comes to the fore, entire herds get wiped out. In past events of local extinctions, especially of gaur from Bandhavgarh, there are lessons for us,” sums up Dr. Joshi.