A look at efforts to secure Kashmir’s protected landscape beyond the widely loved Dachigam National Park.

Wild Jammu and Kashmir (J&K) is majestic, yet fragile. Unexplored, yet far from untouched. This part of the lesser Himalaya has been little traversed, with barely-there trails meandering precariously across glacial ridges and towering snow-capped mountains. Its gentler wild is well-worn by visitors from across the world – glimmering lakes, rolling hills, lush alpine woods and sprawling valleys. While the world is smitten with the widely varying wilds J&K has to offer, a high volume of Protected Areas remains threatened by human disturbance, or apathy. 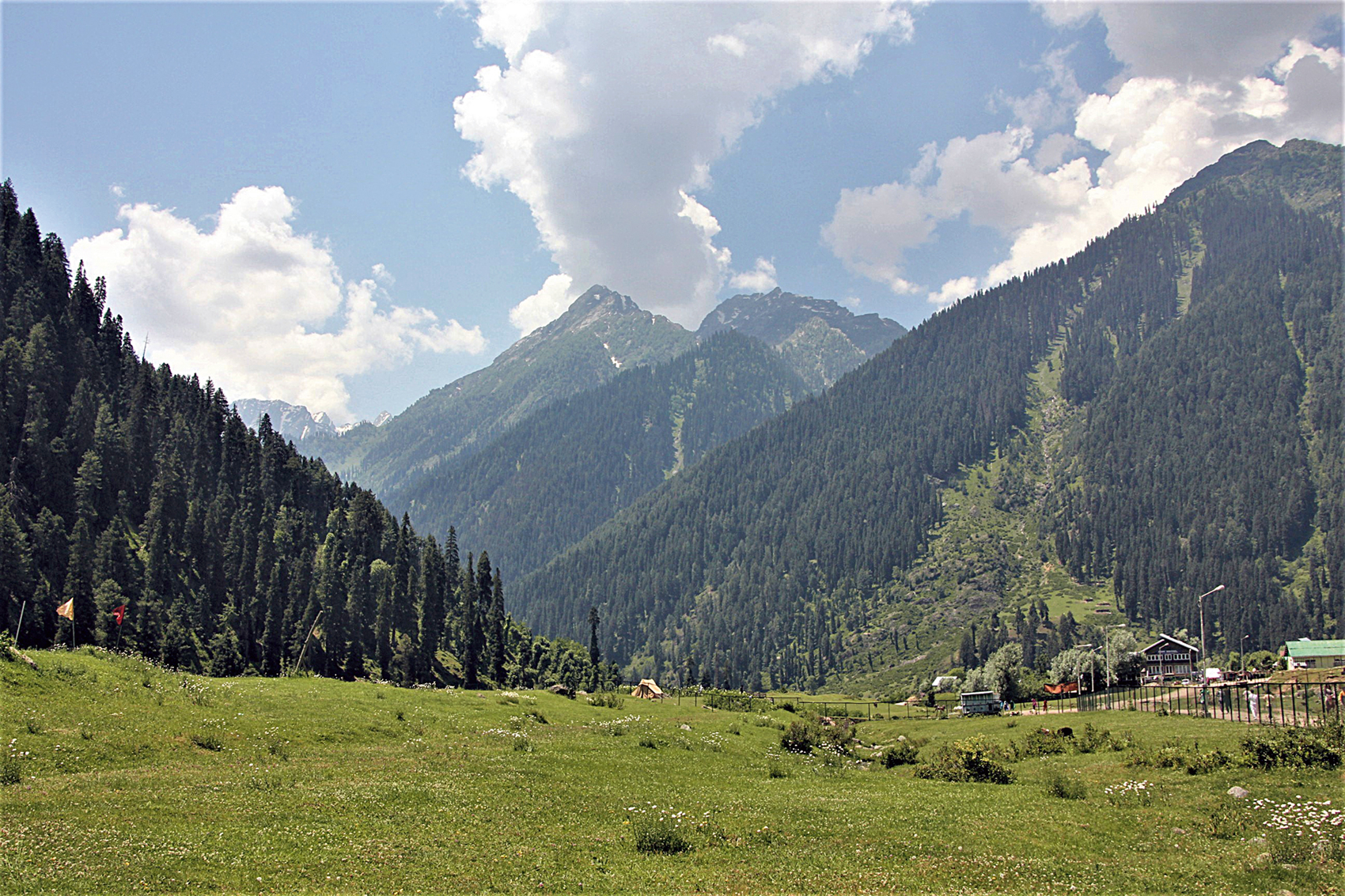 A sweeping view of the emerald Aru valley. The Overa-Aru Wildlife Sanctuary is part of the catchment area of the Lidder river, a tributary of the Jhelum.

PAs such as the wetlands of Pampore and Dachigam National Park (Sanctuary Asia Vol. 32, No. 2, April 2012) are relatively well studied, while others are neglected and often encroached. There are large gaps in our knowledge, documentation, understanding and protection of Kashmir’s wilds. The 2,190 sq. km. Kishtwar National Park, comprising high-altitude evergreen and deciduous forests, offers the adventurous some of the most challenging (and rewarding) treks. This is where the snow leopard, brown bear, Western Tragopan and Himalayan Snowcock are to be found and yet, next to no long-term studies, or conservation efforts have been implemented.

What follows is a quick glance into conservation efforts beyond J&K’s best-known habitat. 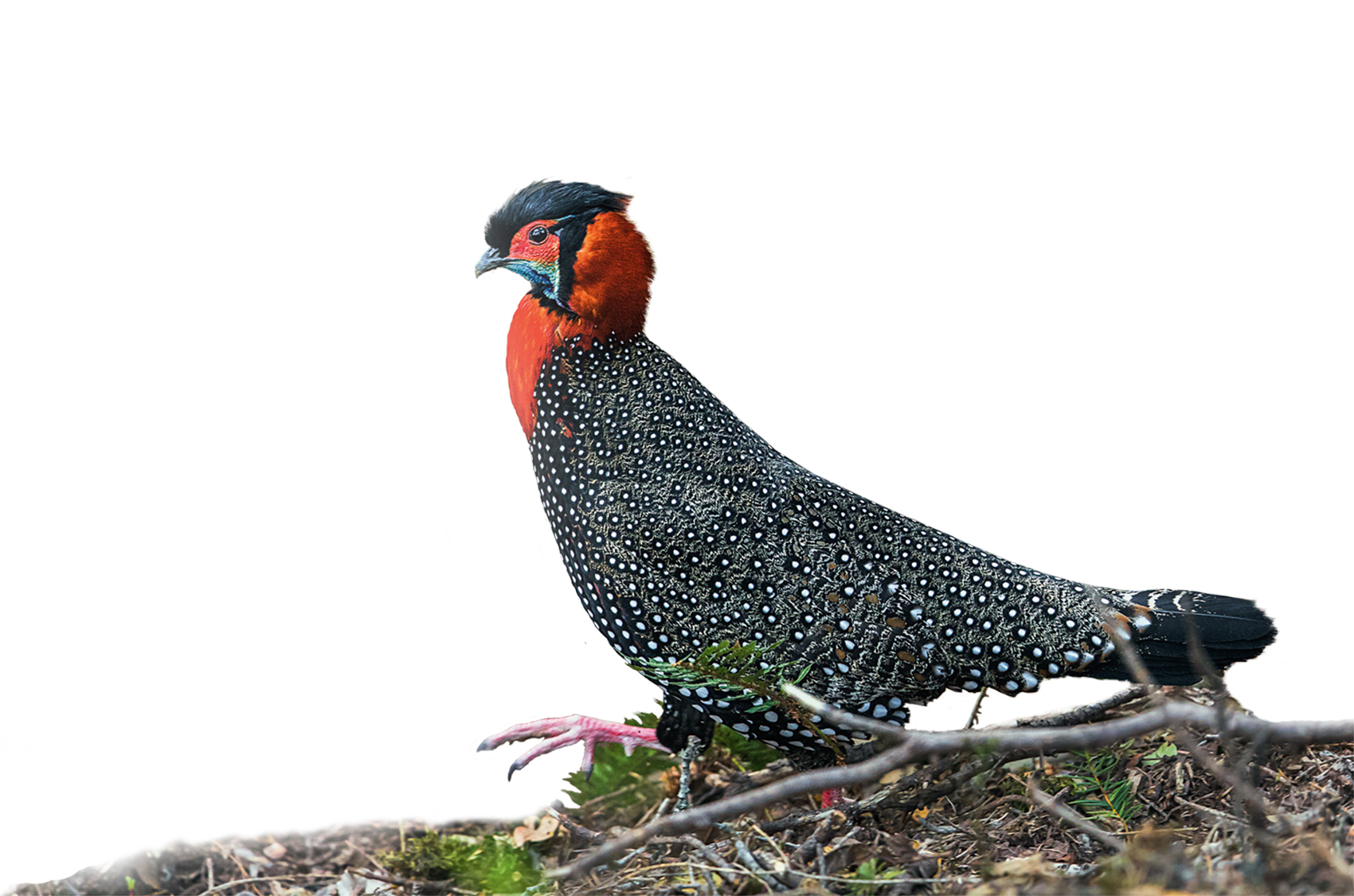 The Pir Panjal mountain range encompasses Kazinag National Park, Hirpora Wildlife Sanctuary and Tatta Kuti Wildlife Sanctuary. The Near Threatened markhor, musk deer, Tibetan wolf, leopard and Himalayan black bear are among the charismatic species found here. Countless rain-fed streams, rivulets and rivers, originate here, and flow down to the valley, bringing freshwater to countless bogs, marshes and wetlands that support a diversity of wild species and the human communities that share their habitat. Naturalists caution, however, that sensitive attitudes and etiquette be maintained in these rich ecosystems. As in other parts of India, tourists have been known to indulge in off-roading, which severely damages root systems and soils.

Despite their isolation, the parks are threatened by overgrazing. In 2018, the Wildlife Trust of India (WTI) began working with the (then) state Forest Department, which had declared much of the PAs as no-grazing zones, establishing four teams to monitor and patrol the parks. Sameer Khazir of WTI points out that the traditional practices of migratory herders were once sustainable, but the Gujjar and Bakarwal communities traditions have changed and now land use patterns have begun to cause habitat degradation in Hirpora. Such impacts of ‘transhumance’ on wild ungulate populations in Hirpora, and the future of herding practices are currently under study. 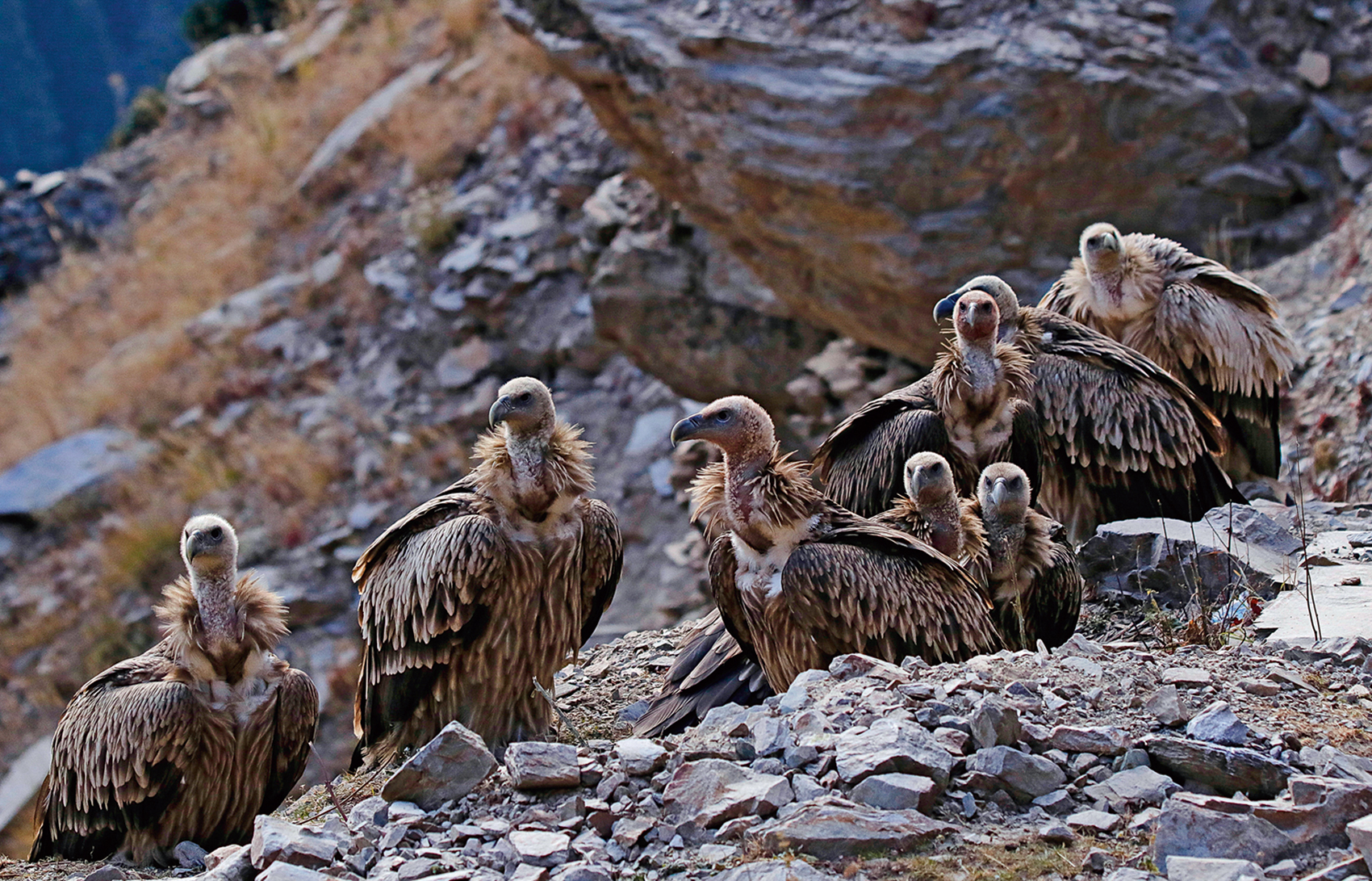 The Near Threatened (IUCN) Himalayan Griffon Vulture Gyps himalayensis is a large raptor of Himalayan mountains, valleys and steppes, and is usually seen solitary or in small flocks.

Work is also on to reduce the firewood dependence of fringe villages by offering cleaner and more efficient fuel available. Prior to the pandemic, LPG cylinders were distributed to 781 households across the Pir Panjal range. This eased pressure on the ecosystem, reduced disturbance, and helped improve community health, especially that of women who spent hours each day next to polluting chulhas on which meals were cooked.

CHALLENGING THE SYSTEM
in Baltal-Thajwas

An enchanting mix of evergreen forests, scrubland and alpine meadows can be seen in the Baltal-Thajwas Wildlife Sanctuary, tucked in the Zangskar mountain range of northwest Himalaya. Notified in the late 80s, the sanctuary, however, lacks a detailed assessment of wild populations and habitat evaluations. It does, however, support a diversity of flora and fauna, including the Himalayan black bear, brown bear, snow leopard, musk deer and Himalayan Griffon Vulture, ibex, Himalayan Monal and Snowcock. Visitors can experience the area by way of a short one-hour trek from Sonmarg to the Thajwas glacier, which feeds the Sind river and is Kashmir’s second largest. 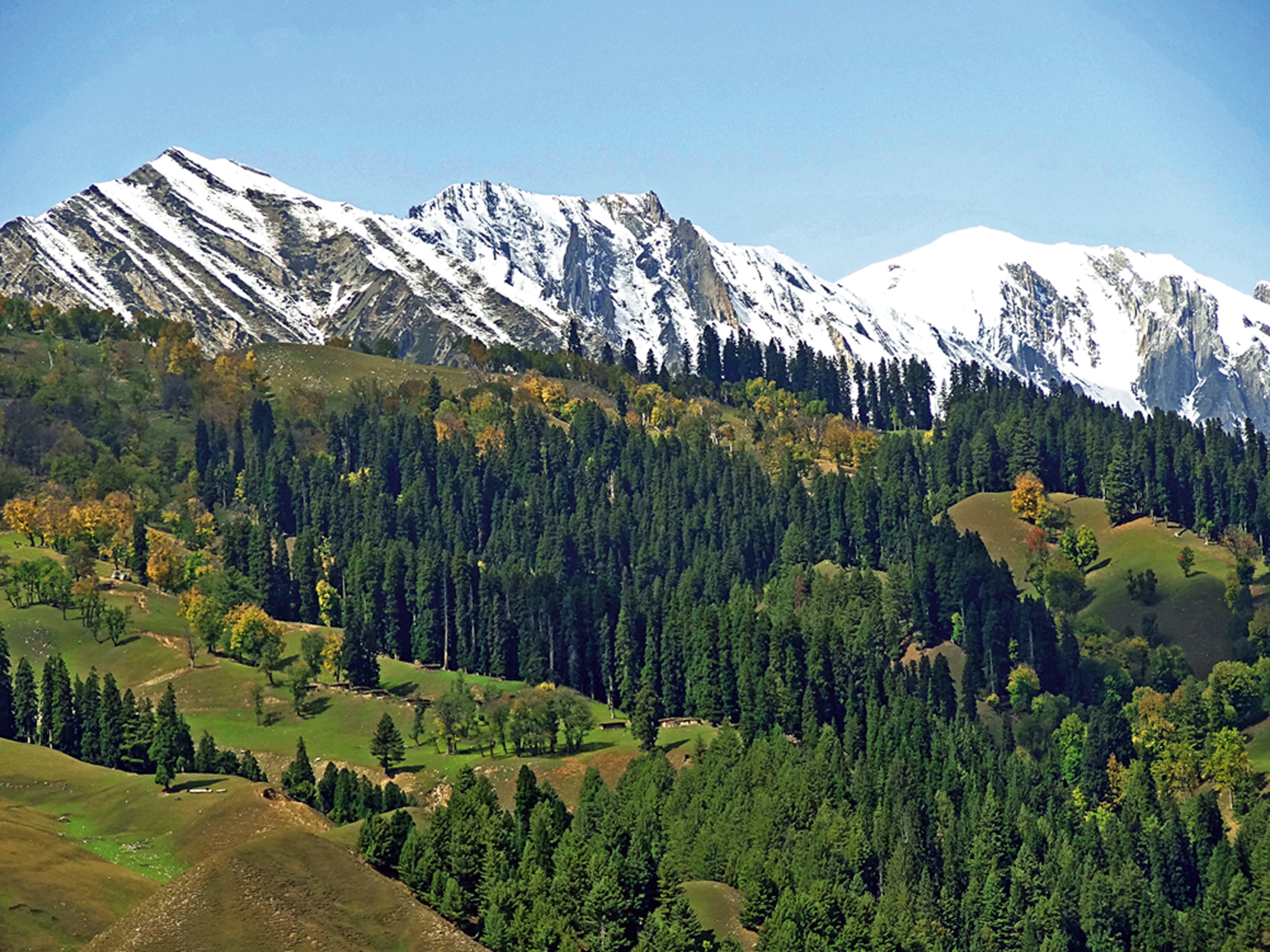 Alarmed that the Thajwas glacier in the Zangskar mountain range was receding at the rate of 3.33 m. per year, the High Court banned vehicular movement in the Baltal-Thajwas Wildlife Sanctuary. Since then, the glacier has been recorded to maintain far more volume.

Until a few years ago, the fragile Baltal-Thajwas ecosystem was overwhelmed by unregulated tourism, with as many as 5,000 vehicles entering the sanctuary daily in summers. Nadeem Qadri, an environmental lawyer and Amicus Curiae for the High Court of Jammu and Kashmir, made a strong scientific case for the protection of the Protected Area. He pointed out that vehicular exhaust was adversely impacting the local climate, and added to the risks posed by climate change to the vulnerable Thajwas glacier. In 2017, he was appointed by the High Court of Jammu and Kashmir to assist on all forest-related matters in the sanctuary. Subsequently, off-roading was banned. Qadri reports: “The impact was magical and grey waters turned blue, thanks to the ban of vehicles in the sanctuary. The glacier has since been recorded to maintain far more volume, and wildlife, including brown bears, are returning to the area.” 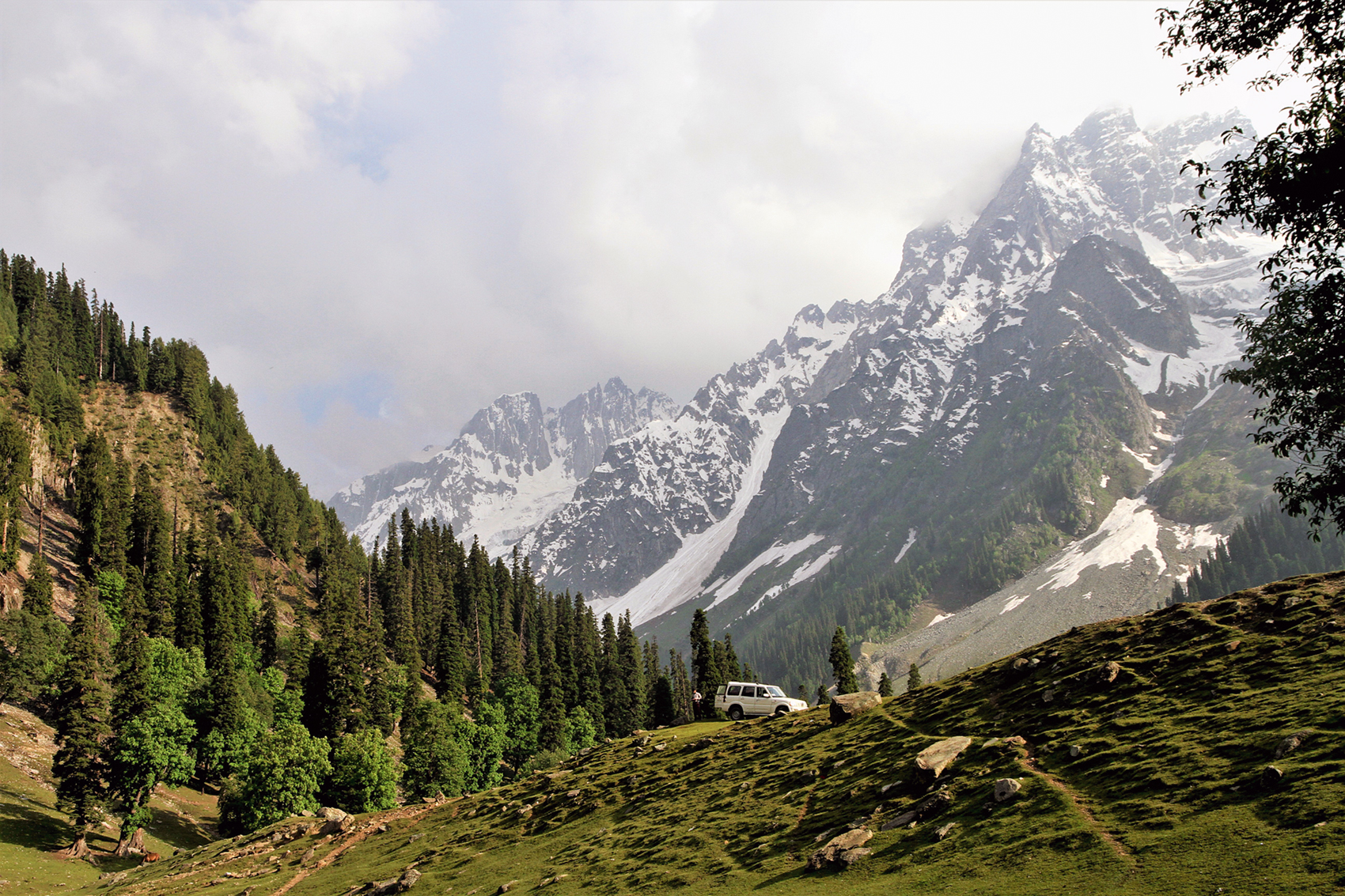 The WCF confirms that these reserves are frequented by migrating tribes with established grazing rights where their sheep, goats and horses are brought to graze in summer. Attempts are continually made to win the support of communities, but appeals often go unheeded. It will take sensitive policy decisions to work with local communities, for without their support these extension habitats for Dachigam could fast degrade. One option being explored is to reduce tourism pressures from the popular Dachigam National Park to these smaller, but equally stunning areas so that the herders who know the mountains like the backs of their hands are able to benefit from less intensive grazing, yet earn more revenue from low-impact, experiential tourism. 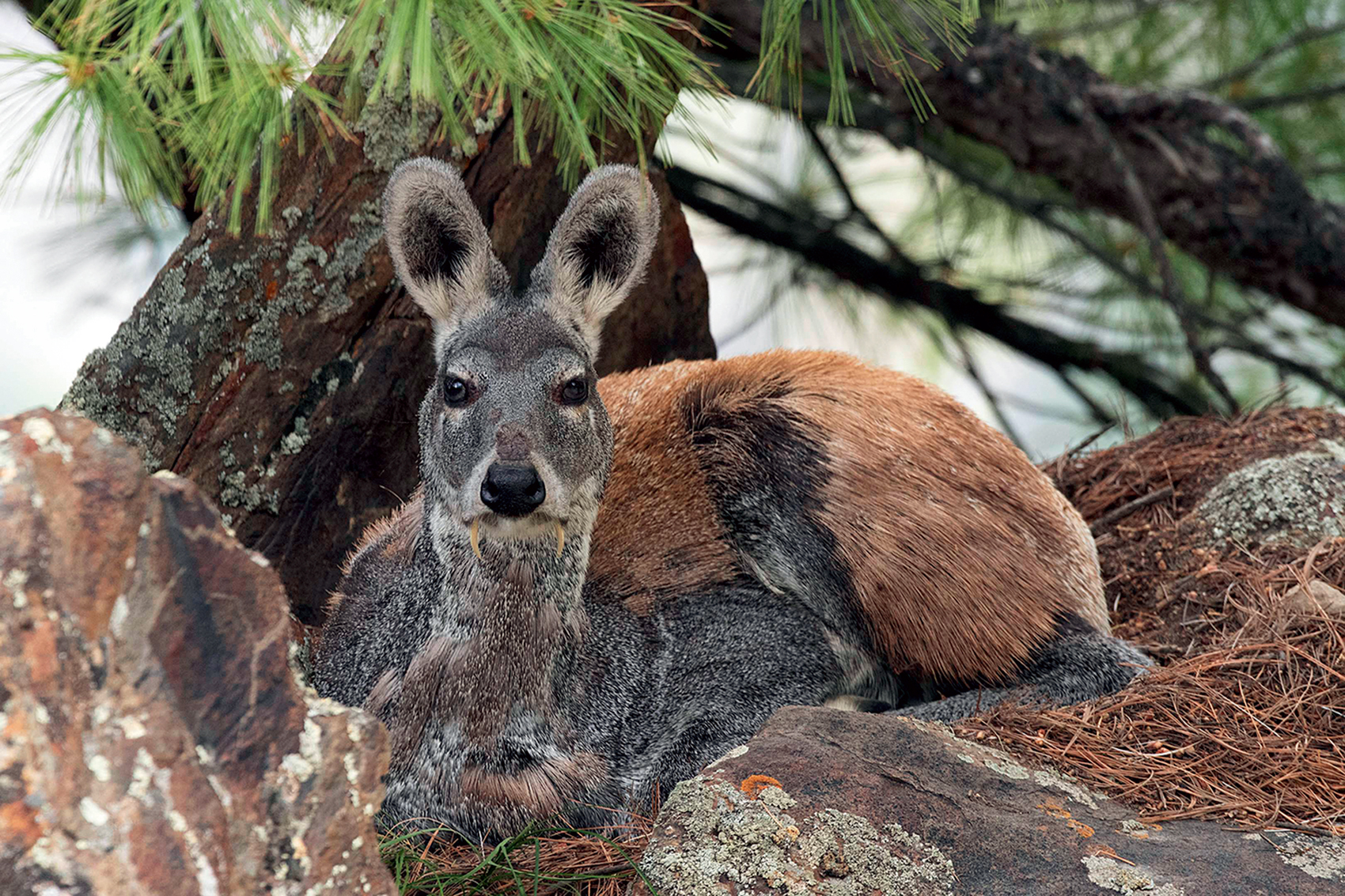 The Kashmir musk deer Moschus cupreus, is found across the western Himalaya from central Nepal to Afghanistan.

In northern Kashmir, conservationists strive to map and secure populations of a Vulnerable pheasant – the Western Tragopan. The males are charming, sporting bright crimson patches and creamy white spots and indulging in elaborate mating dances. The bird inhabits high-altitude temperate forests across J&K and Himachal Pradesh and has lovingly been christened many names – daangeer in Kashmir, and phulgar and (my personal favourite) jujurana or ‘king of birds’ in Himachal. This, despite the bird being extremely shy, generally silent and only frequenting undisturbed core habitat areas. Though few have actually sighted it in the wild, if you must see one, try your luck in the conifer forests and riverine scrubland of the Limber and Lachipora Wildlife Sanctuaries. 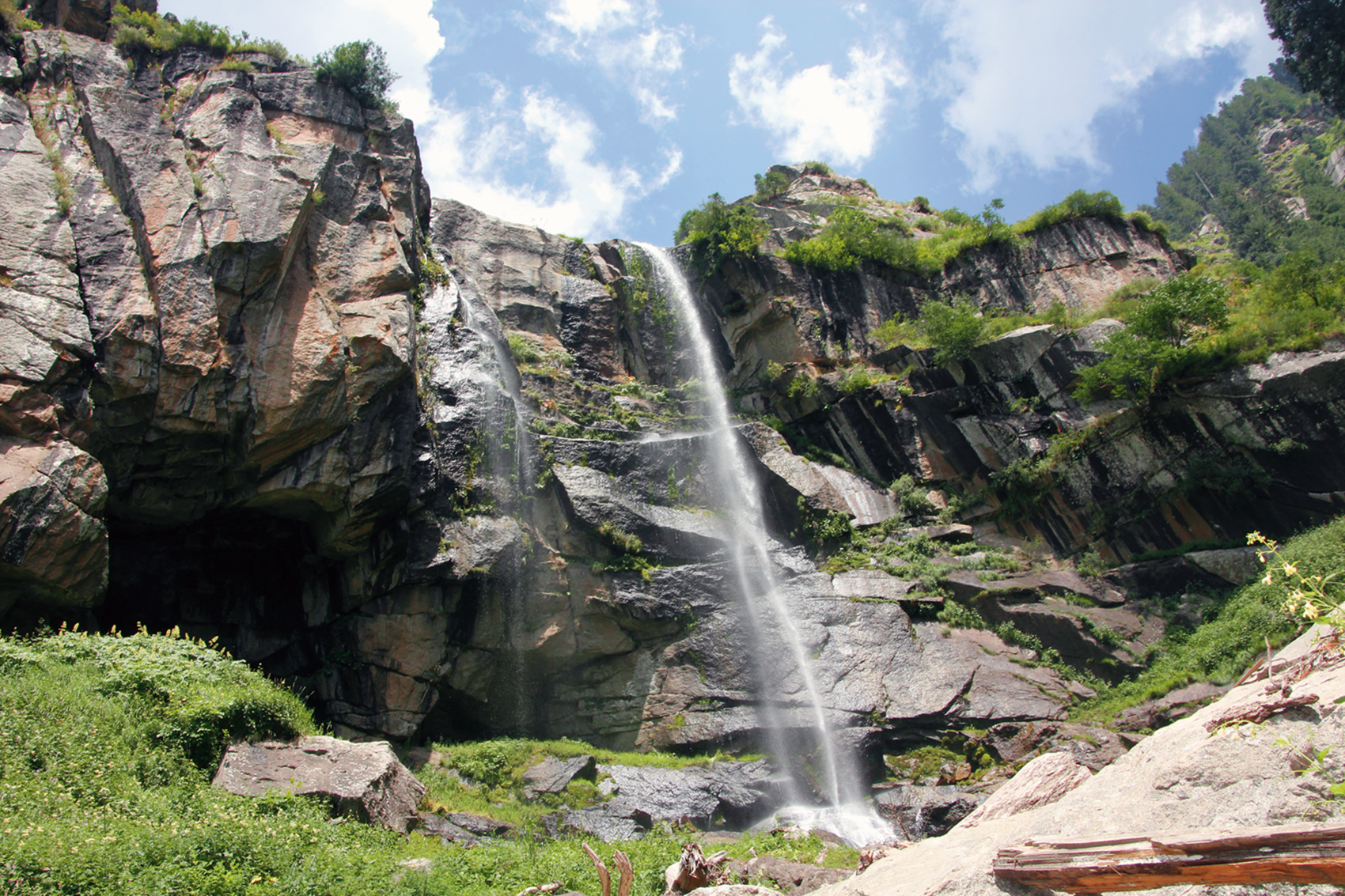 Kazinag’s natural wonders such as this stunning waterfall makes it a popular tourist destination. Naturalists caution, however, that sensitive attitudes and etiquette be maintained in these rich ecosystems.

A WTI study published in 2017 estimated a global population (the bird is also found in Pakistan) of 2,500 to 3,500, and discovered a previously unknown population of 60-80 individuals in Limber. WTI has been monitoring and protecting the bird in high potential sites across both PAs. WCF has worked to raise awareness among children and adults of Bakarwal and Gujjar settlements in both Limber and Lachipora and are known to set up traps to capture the bird. The team also patrols and demolishes traps in the buffer zone of the PAs. The pheasant is hunted for its plumage and is seriously threatened by urbanisation, but there may be light at the end of the tunnel – a captive breeding programme is underway at Sarahan, Himachal Pradesh, and conservationists, photographers, writers and filmmakers struck by the antics of this handsome avian continue to look for it in the wild and tell the world its story.

J&K’s legal framework does not yet recognise the vitality of the link between tourism and conservation, a critical fault in the system, given the region’s dependence on the former, and extreme vulnerability to climate change, anthropogenic pressures and thus intrinsically, biodiversity loss. “There is no actionable tourism policy in place or any directives on how it must be conducted within Protected Areas, which is shocking, given that about seven per cent of our GDP comes from tourism. For example, no conservation work has been done in Gulmarg,” says Nadeem. The Gulmarg Wildlife Sanctuary in the Baramulla district has received next to no protection since its notification in the late 80s. Gulmarg is a popular skiing destination in winter and is equally popular with other tourists all year round. An expansive recreational ground sprawls smack in the middle of the Gulmarg meadow. Visitors stay at the large resort, play golf and take Gondola rides on cable cars that can transport 600 people every hour to and from the Kongdoori mountain. They offer scenic views of what looks like beautiful coniferous, evergreen forests that are in fact very degraded. Today it is hard to imagine that this area was once an undisturbed refuge for black and brown bears, leopards, musk deer, and avifauna like the Himalayan Monal and Snowcock. 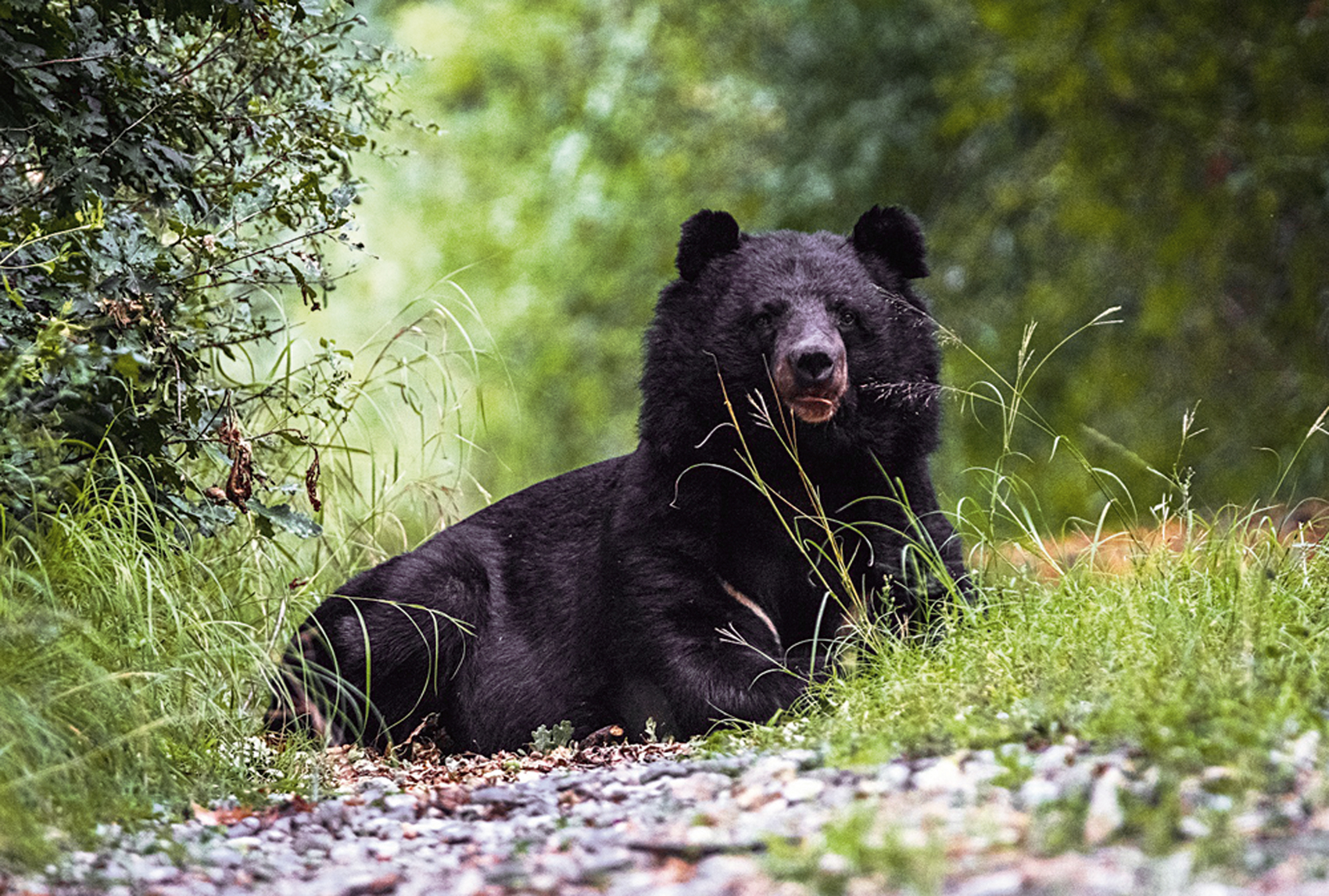 J&K must recognise that people come to visit primarily because of the state’s natural beauty. Also that such natural ecosystems are its safety net in an age of a galloping climate crisis. With intelligent planning and more discipline than is evident, it is possible to figuratively ‘have our cake and eat it too’, but only if we make it our mission to ensure that the protection of wild Kashmir becomes part and parcel of the development strategy of the state.

Until the late 90s, the Sálim Ali National Park was nine square kilometres of wetland on the outskirts of Srinagar that invited at least 70 species of birds. The park also harboured Himalayan black bears, musk deer, leopards, markhor and Kashmir’s state animal, the hangul deer.

Together with the Dachigam National Park, this forested area formed the catchment of the Dagwan river, which supplies Srinagar with water and helps maintain the health of the Dal Lake. The park had been notified with great fanfare in the late 1980s, but unfortunately in 1998, Chief Minister Farooq Abdullah, approved a plan to build an 18-hole golf course in the national park. Overnight, the habitat was bulldozed, destroying over 10,000 trees. All the infrastructure intended for a captive breeding programme for snow leopards was demolished. Soon, tube wells and pump stations were set up, pesticides liberally used and, what was once a throbbing ecosystem was chiselled into a lifeless playground for the rich and famous. Local conservationists, including Mir Inayet Ullah, the Chief Wildlife Warden, tried his best to dissuade the powers that be… to no avail. By 2001, the golf course was built. The park, however, has never been denotified.

Divya Kilikar is a writer, editor and wildlife enthusiast who focuses on communicating the rationale behind conservation. She is Assistant Editor at Sanctuary Asia.