By highlighting 15 iconic Indian species that are “in need of conservation and heart” in her latest book, Neha Sinha effectively captures the country’s ecological journey that has had successes and failures. This must-read book vibrantly showcases the country’s wilds even as it reminds us of the dangers that threaten them, writes Bittu Sahgal in this review. Find an excerpt in the box below.

When head and heart are in sync, magic happens. Almost before you start reading Wild and Wilful, a statement from the author jumps out at you:

“A profound truth of the wild, and the world at large, is that we are a part of it not owners of it.”

That reality encompasses all that Homo sapiens needs to internalise to trigger what the late Edward Goldsmith, soothsayer and Editor of The Ecologist, called ‘The Great U-Turn’.

As history goes, the story of humans is best understood and told through the stories of the co-inhabitants of planet Earth, the original gardeners of our troubled Eden. This is what paleontologists have done. This is what evolutionists did. In a sense, this is also what Neha Sinha has attempted to do in real-time.

I have read this extremely well-written, well-crafted book through twice. More than the species she writes about, Wild and Wilful reveals dark truths about ourselves, the naked apes who have been gifted power with little experience and next to no accountability.

As for the near-perfect species this wilful author brings to life, in spite of their bumped-up monkey-neighbours-from-hell, most of them will clearly outlive us.

This book goes beyond nature conservation, human arrogance, and development and species loss into the world of literature. The extract in the box below might give you a flavour, but here are more lines that flow from one who is clearly as angry as she is smitten:

On the Folly of Capturing Urban Leopards

Meanwhile, WII students protested the administrative actions. They were duly warned to fall in line. I asked the scientists if they were doing the right thing. Did the space of the classroom extend to the space of the home? Can we make recommendations for poorer villagers but not follow them ourselves? Can we trap a sentient leopard before it has done anything ‘wrong’?

On the Beauty of Urbania

Dehradun’s air is germane. Fruits grow on boughs as carelessly as dust swirls in other cities. There are trees with litchi fruit, glistening a soft ruby red, draped casually over house walls. Mangoes peep out like fevered eyes from gardens. Once a year, homes get covered in molten-orange flame vine (also called trumpet vine) blossoms.

On the Misplaced Love of a Wild Tiger called Machhli

When she was sick, she was medicated. In the wild, an injured or weak tiger is a dead tiger, because tigers have to hunt alone. And when Machhli couldn’t hunt, food was left out for her. The lines between a pet and a wild animal had been smeared. The roughness of the jungle had been flattened to become smoother, more anthropocentric.

On the Amur Falcon

Migration is like a form of magical clockwork. Birds know when to leave for their migrations, how much ground to cover, where to stop, and, amazingly, they also leave at the same time each year. Seas and skies are not too big for a little bird to cover; they fly over mountains. 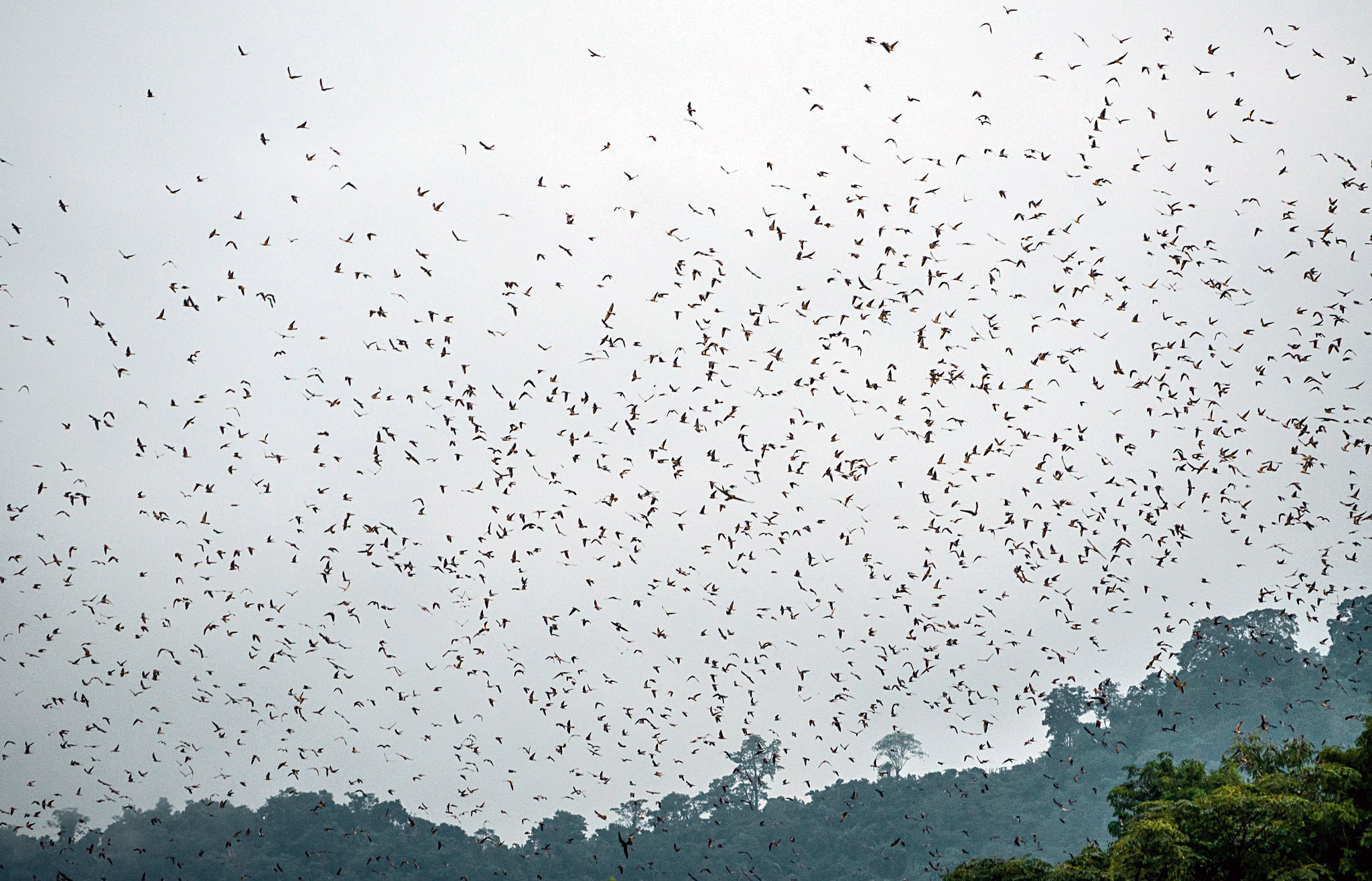 On the Irrationality of Killing 'The Other Monkey'

In one fell swoop, animals that were protected by law were to be piled up, cornered and killed by unspecified means for the cost of a cup of coffee at Starbucks. What changed so much that an animal people fed on Tuesdays came to be made the villain of the story? It was bipolar that a being that had daintily eaten momos from people’s hands could now be killed by those hands, and by any means possible. If anyone wanted to torture the monkey for days on end, they could now do so. They could make a horror movie with monkeys as the villains atop a mountain, where the animal would be lynched in the end.

In the cold waters of the Himalayas, a bird waits to clear its extinction debt. The White-bellied Heron is a large, grey bird that loves water. But not just any water. The water should be clear, unmuddied and hurried. Preferably surrounded by huge, imposing boulders, where the bird will perch to spear its prey. The White-bellied Heron, with 200 individuals left on earth, is a bird that no one will mourn – or is mourning. Found in Myanmar, Bhutan and India, the bird has much in common with the GIB [Great Indian Bustard]. Both birds like specialist habitats, and both have painfully slow breeding rates.

Conservationist Ranjan Kumar Das recalls seeing the White-bellied Heron in Arunachal Pradesh. The bird sat like a statue on boulders. This is the very image of montane wilderness – a secretive bird with all the coiled energy of something that is living but appears like it is made of stone, almost like the mountain itself. A powerful, loaded arrow on its magnificent vantage point. But Das, who conducted surveys for the bird in Namdapha, in Arunachal Pradesh, in January 2016, saw only four individuals in over twenty-two days. He also ascertained that the bird likes confluences of rivers. The braids created on the Namdapha river, an ephemeral, interwoven interaction of soil, stone and water, are favoured habitat, especially when streams merge with the river. “The heron was earlier recorded in Nepal and Sikkim, but not recently,” Das says with resignation. 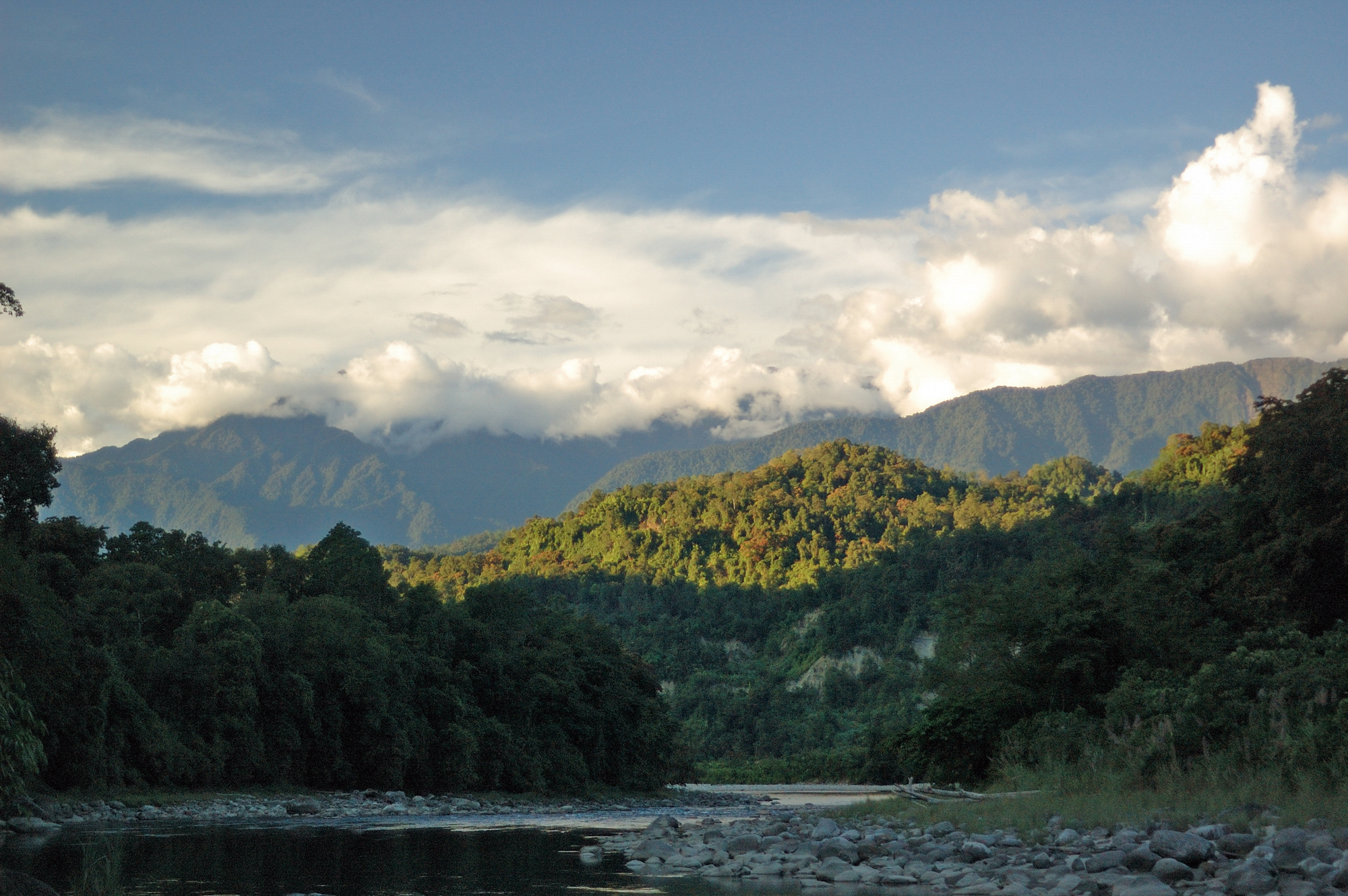 Namdapha, Arunachal Pradesh, was declared a tiger reserve under Project Tiger in 1983. Its name is derived from Singpho “nam”, meaning water and “dapha”, meaning origin, referring to its origin in the Dapha Bum glaciers. Courtesy: Kalyan Varma.

What could be the reason for local extinction? Possibly, it is the dams made on rivers in Nepal and the larger region. If the river is a vast ellipsis, flowing with its own will, meandering as it wishes, dams are rude period marks on this flow. Dams don’t just control flow, they also contain it. A slow-breeding bird that likes its waters clear and flowing, with a stream bubbling as if making lace on the edges of its course, is a bird that is running out of habitat. It is also a bird that the world has largely forgotten; one that would be dismissed as a troglodyte which can’t keep pace with modern dams and technologies. Ironically, Arunachal Pradesh is often called the dam capital of India.

Perhaps disoriented, the heron seems to be striking out to create a foothold in this altered world. It has been spotted on the Brahmaputra river in Assam, which lies south of Arunachal, a place where the river creaks with the burden of people, boats, expectations and silt. The bird was probably feeling both lost and confused in the sediment-rich trundle of the Brahmaputra’s flood plains when it was sighted there, hundreds of kilometres away from its known habitat at the Namdapha and Noa-Dihing river confluence.

These are places Indians have not heard of or seen. They exist in mental picture-postcards of the exotic, feral Northeast India. In reality, this is classic montane land. The Eastern Himalayas rise like stately statues. In contrast to their stillness, streams rush by, babbling to themselves. The air sparkles, silver fish dart in the waters, challenging the giddy shine of the streams. Here, White-bellied Herons hunt from boulders on the sides of rivers. 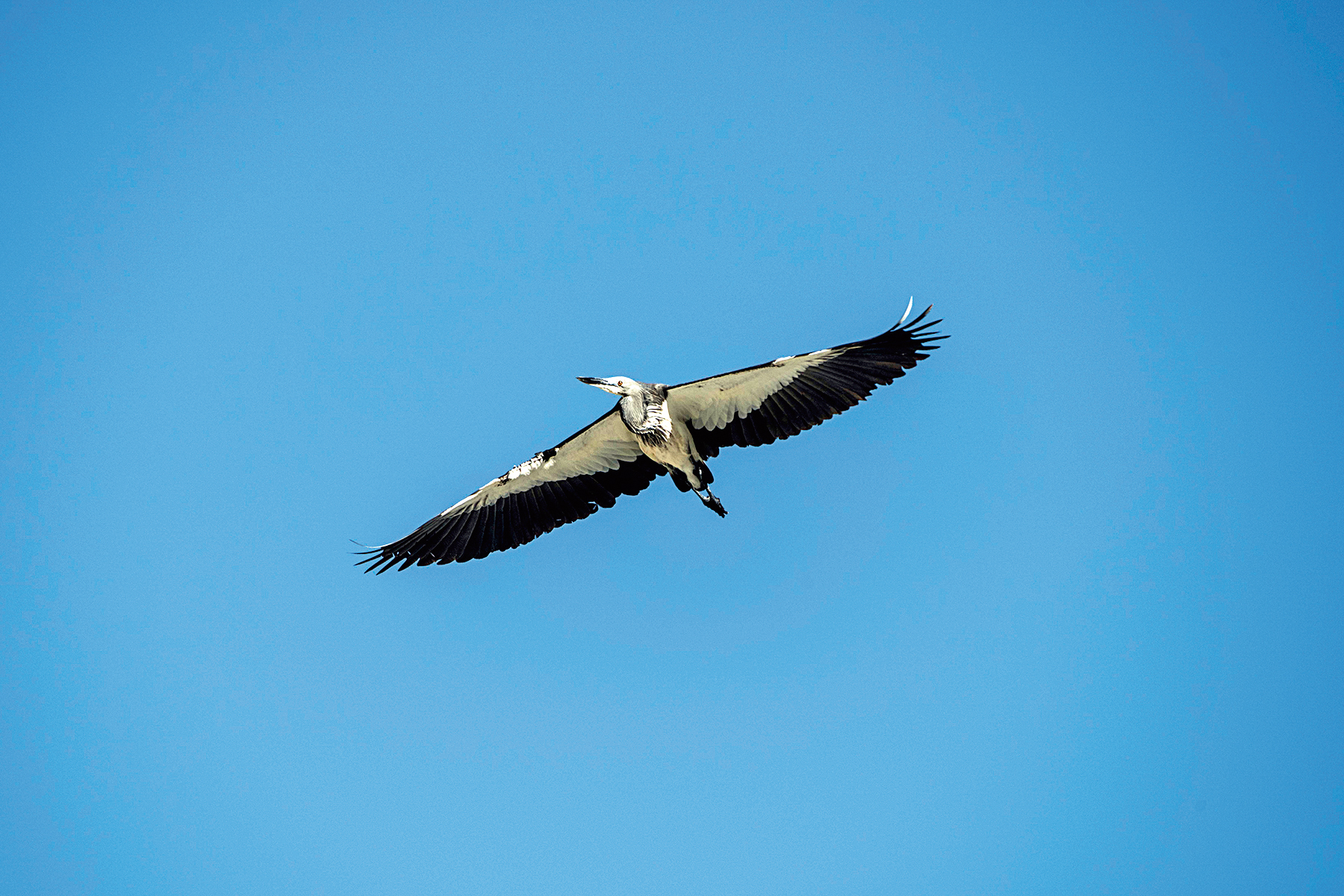 The White-bellied Heron Ardea insignis is the second-largest heron in the world, and is critically endangered. Conservationist Ranjan Kumar Das spotted only four individuals at Namdapha in 2016, and fears this indicates imminent local extinction. Photo: Jugal Bharali.

But 2019 had a surprise in store. A secret camera, hidden from plain sight, was set up in a new part of the mountain wilderness to study a ghost with padded feet. India’s national animal is the tiger. This stealthy, powerful predator is in both the Eastern and Western Himalayas, though historically its numbers in the Eastern Himalayas are lower than in the West. The camera trap was set in Arunachal’s little-known Kamlang Tiger Reserve, meant to uncover details of the biggest big cat on earth. The camera found a critically endangered bird instead. A single White-bellied Heron strode through the frame, looking as unknowable and implacable as rare species do, as close up as a scientific selfie can take you.

This was the stuff of alchemy: the precise moment when an explorer may turn back to survey for wildlife in an impenetrable wilderness, after nearly giving up. The search for cryptic species is far more exhausting and more rewarding than any other wildlife trek. The rule of the game is that the animal doesn’t want to be seen, and thus all you can do is try. The wild soul becomes something of lore, seeming larger, more mythological – or more frustrating – than it really is.
India has already lost the cheetah, the Javan rhino, and the Pink-headed Duck. The Jerdon’s Courser, a bird of scrubland, was lost too, until it was rediscovered in Andhra Pradesh, and then lost again.

And when you do find a cryptic species like the White-bellied Heron in a new place, it’s like you have found an entire song while searching for a snatch of lyrics. Finding the world’s most endangered heron while searching for a tiger is like discovering a song about the circle of life and the way the wilderness joins species. The forest connects so many lives – like a necklace. Not a symmetrical pearl necklace, but a necklace with stones, crystals, pearls and wood, different shapes and textures, shining with their own different lights.

Each spot the White-bellied Heron uses is valuable, worth its weight not just for its sparkling waters but also for its genetic potential in keeping the bird alive in the world. Because though the International Union for Conservation of Nature (IUCN) pegs the global population of White-bellied Herons at about 200, the actual number may be less than 60 to 100. We are at a place in history where each heron, individually, becomes globally important. Like the GIB, the White-bellied Heron is a true habitat specialist, with a fastidiousness that makes it an almost-fossil.
join the conversation