“Leopards are a mixture of several natural aspects – social but solitary, inconspicuous but significant in numbers, large but ubiquitous; they don’t fit into any of the standard pigeonholes of large-cat conservation.”

Scientist, conservationist and writer, Sanjay Gubbi’s latest book Leopard Diaries, is a nuanced compilation of his decade’s worth of experiences in Karnataka’s wilds. With notes on natural history, animal biology, conservation politics and more, he weaves a rich tapestry worthy of the big cat’s legacy in India.

The leopard, he writes, is a poster boy against extinction. Indeed, this large felid has survived against all odds not only in wild forests but on the fringes of urban pockets too. It can co-exist with predators much larger than itself, and navigate the narrow boundaries with human communities with equal agility. Growing up in Tumkur district, with low lying hills and forest patches, Gubbi is no stranger to the delicacy of this wildlife-human balance. A childhood curiosity burgeoned into a lifelong pursuit to understand it.

“This book is as much about my transformation as it is about the leopards.” 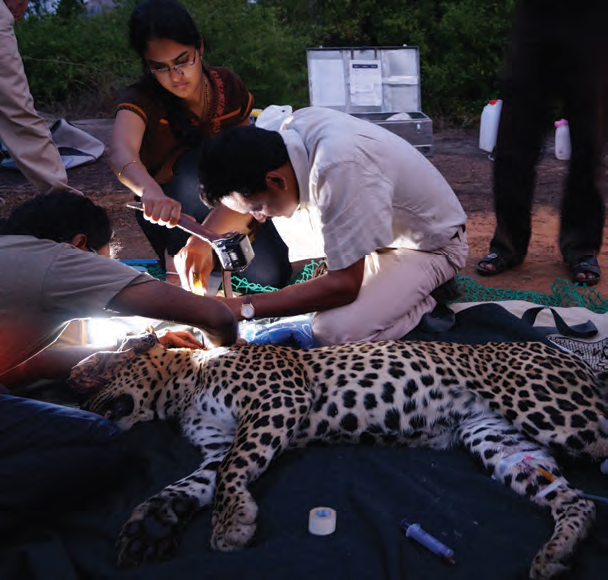 The author and his team placing a radio collar on a leopard, to study its movement and behaviour post-release. Photo: Arun Bastin.

We join Gubbi as he embarks on a delightful natural history retelling of the leopards’ history in the world. We follow him and his team on their arduous journey that began in 2011 as they walked over 2,800 sq. km. across 24 areas in Karnataka’s wilds, in search of leopard marks, scat and scrapes to assess leopard populations and occupancy. We are privy to their extensive camera trapping expedition – many successful in capturing behaviour that has been little observed, such as polygamy in leopards, new records of honey badgers in the Cauvery Wildlife Sanctuary, and not-so-surprisingly, human behaviour too.

Thrilling field adventures pace up the narrative. Tense moments prevail in ‘Following the Cats’, when signals from Gubbi’s team’s first collared and released leopard, Benki, are elusive (they became active after 48 hours, much to their relief). There’s also an entire chapter on Gubbi’s viral leopard encounter that resulted in grievous injury. And all the while, the narrative is peppered with warm everyday tales – eating hot masala dosa in local eateries – that combined with the simple prose make this a leisurely read.

Leopard Diaries is as much an ode to the rosetted cat, as it is to the foot soldiers Gubbi has worked with over the years. Indeed, people and communities are a vital part in the leopard’s fate.

“The leopard’s future probably depends upon how much people are willing to tolerate this large felid.”