I walked back disappointed from the meeting room. It was February 2012, and my proposal to notify the Malai-Mahadeshwara Hills Wildlife Sanctuary (then called the Kollegal territorial division) did not find much support at the government meeting. As in any applied conservation work, it's always a long-haul to success, sometimes even taking years. We needed to be patient.

The forests of Malai-Mahadeshwara Hills (MM Hills) at the confluence of the Western and Eastern Ghats are bone dry during summer. Water is extremely scarce, and unlike the lush forests of the Western Ghats, the vegetation here does not enchant visitors. Sandwiched as it is between the Biligiri-Rangaswamy Temple (BRT) Tiger Reserve on the western end and Cauvery Wildlife Sanctuary on the eastern side, I was convinced of the potential of this landscape to host tigers and other large mammals. Though the connectivity to BRT on its western edge is through a very fragile corridor, the link could act as a path for dispersing tigers from BRT to bolster the possible resident tiger population of MM Hills. 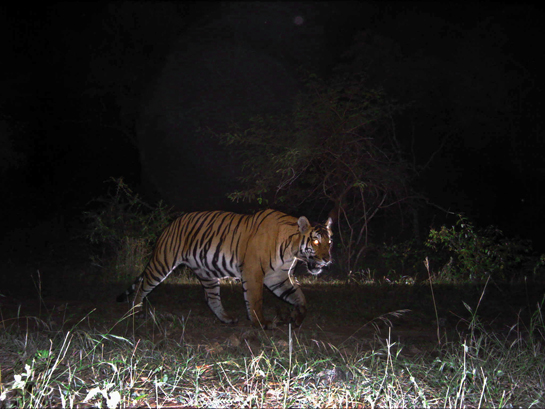 This region supports one of the last and perhaps the finest tracts of dry tropical forests, including woodland savanna and extensive riparian forests. In these riparian forests survive one of the last remaining populations of the grizzled giant squirrel. As per the International Union for Conservation of Nature (IUCN), this rodent has been recorded in only five fragmented sites, and fewer than 500 mature individuals are believed to survive within the country.

Also part of this dry landscape is the Sathyamangalam Tiger Reserve, North Cauvery Wildlife Sanctuary, and a few reserved forests including North Baragur, Guttiyalattur and others in Tamil Nadu that connect MM Hills to Mudumalai and further to other tiger reserves such as Bandipur and Nagarahole. This entire chunk is perhaps one of the largest productive landscapes for tigers anywhere in the world, with over 9,000 sq. km. of dry deciduous forests that can support healthy densities of large carnivores and their prey. Currently, this is perhaps the only landscape other than the Terai Arc in Uttarakhand and Uttar Pradesh that is contiguous, ecologically productive and fairly well protected from a large mammal perspective.

In 2013, there was a more favourable government setup, and we renewed our efforts to have the MM Hills declared a Protected Area (PA). It worked. Thanks to far-sighted government officials including R. Sreedharan, Dipak Sarmah, B. K. Singh and Javed Mumtaz, an area of 906 sq. km. was finally notified as the Malai-Mahadeshwara Wildlife Sanctuary in May 2013. It was nothing short of a miracle that the entire process was completed within a span of two weeks (it helped that all the relevant data was already in the files since our homework had been done over the years)! Quick responses from Javed Mumtaz, the Deputy Conservator of Forests of the area, ensured all legal procedures and reorganisation of the area from a wildlife perspective were smoothly executed. Our earlier efforts in 2011 saw the adjoining Cauvery Wildlife Sanctuary expanded from 526 to 1,027 sq. km. The entire landscape now receives higher protection, and the area is managed for the singular purpose of wildlife conservation.

Hidden Treasures of the Landscape

Very little research work has been done in this landscape, primarily because the infamous bandit and poacher Veerappan lorded over the area for the better part of two decades and was prone to kidnapping people for ransom. His death, coupled with the area's notification, now offers new opportunities for wildlife research.

My interest was in trying to understand leopard occupancy over a gradient of habitats within and outside PAs. MM Hills and Cauvery were part of my study area. Initial occupancy surveys strengthened my intuitive feeling that the landscape had great potential.

We undertook the first-ever camera trapping exercise here and it threw up very encouraging results for both leopards and tigers. Though we are still shuffling through thousands of camera trap images, it does look like tiger densities are going to prove to be higher than originally anticipated.

MM Hills turned out to be one of the toughest landscapes we have worked in. While an extensive network of forest roads and easy terrain make camera trapping very straightforward in some PAs, here there is almost no road network and most of the camera trapping had to be carried out on foot in highly rugged, undulating terrain. It was a physical and logistical challenge for everyone involved, but we gained enormous insights into the potential and the constraints of conservation in the landscape. 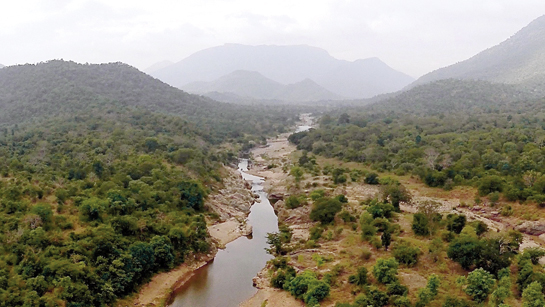 Veerappan was continually the subject of discussion whenever we met people. The forest staff that guided us would narrate interesting stories, pointing to his hideouts and sites where he had carried out his signature, gruesome acts. The forest was open, but I am still amazed at the bandit's ability to keep himself and his gang alive in this austere land for over two decades.

Our digital camera traps worked 24x7 in the same locations where Veerappan once ruled. The cameras revealed so many exquisite secrets of the MM Hills. Apart from leopards and tigers, we documented ratels, the ever-elusive pangolin, the Madras tree shrew, and a bushy-tailed Indian fox, perhaps the first documentation of the species from this area.

While we camera trapped, Javed Mumtaz, the experienced officer who came up the ranks, and Vasanth Reddy, a steely-eyed, young forest officer managing the Cauvery Wildlife Sanctuary, ensured that the landscape was provided with the essential infrastructure required for wildlife protection. Working closely, they ushered in several important conservation gains that I am confident will enhance the landscape in the years ahead.

From a tiger-conservation perspective, it might take a while to stabilise the terrain, but provided dedicated officers continue to be put in positions of control, the area will turn into one of Indias finest tiger habitats. 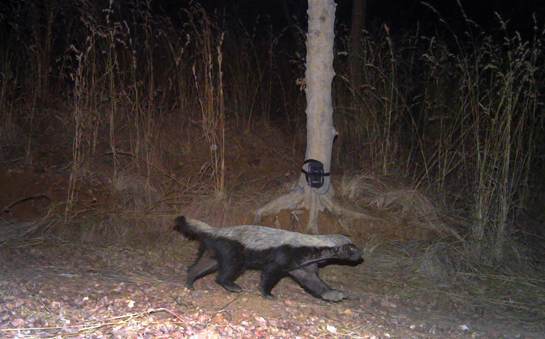 I hasten to add that protection is going to be a Herculean task because both PAs share an interstate boundary of nearly 170 km. and are additionally separated by the Paalar and Cauvery rivers. Poaching of sambar, chital, barking deer, four-horned antelope has been tough to detect, leave alone control. Prosecution, even more so. This poses a huge threat to the wildlife of the region and the problem is compounded by the fact that granite quarries that were closed during Veerappan's reign of terror are now likely to be opened up. On top of this, we have the possibility of ‘religious tourism being promoted on a massive scale. As if these were not hurdles enough for a biodiversity comeback, a colossal beef industry thrives in this area, based on livestock brought in from Tamil Nadu that is grazed freely in these PAs and then taken to Kerala. The resultant plant biomass loss and poor regeneration can be imagined. This is almost exactly the same thing that continues to be inflicted on South America, where large tracts of the Amazon are converted to pasture for cows, to cater to the global beef industry.

Many of us do not have the luxury of merely wringing our hands. We must work with the cards dealt to us. The MM Hills area is connected to BRT through a very narrow corridor, possibly less than one kilometre wide, through the Doddasampige-Ediyarahalli Reserve Forests. This corridor is where the Wildlife Trust of India purchased land (from private owners) and donated it to the Forest Department of Tamil Nadu, to strengthen connectivity for wildlife.

Clearly, we need more such efforts. The Hasanur Ghat road, for instance, passes right through this critical corridor and we need to ensure that the road is not widened and that alternatives, which are available, are the option of choice. Additionally, implementing mitigation and speed-checking structures on the current road are desperately needed. Our research reveals that tiger numbers are showing positive trends in the MM Hills-BRT landscape, possibly because animals dispersing from BRT are finding tentative space in the overlap between the two PAs. We have already documented individuals that are common to both these PAs. Tigers also move between the MM Hills and the Cauvery Wildlife Sanctuary. Given this reality, the criticality of protecting and enhancing the viability of this narrow corridor cannot possibly be over-estimated. 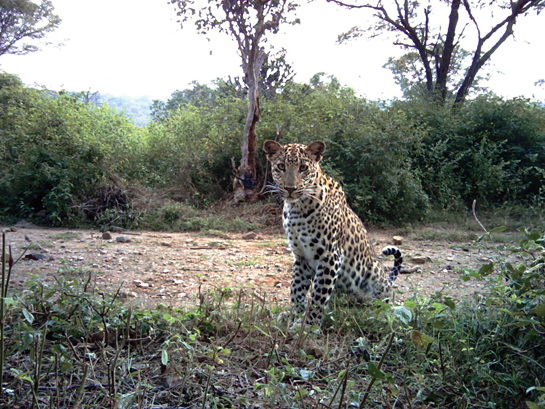 What planners sometimes forget is that the watershed forests protected by such PAs are primary sources of water for rivers such as the Cauvery and Paalar. Several streams that flow seasonally also benefit from these forests. Moreover, water from Hoogyam, Udthorehalla and other dams that sustain small and marginal farmers of the area flow from these very forests. This connection between forests and water security is well known to those who understand the ecological systems of the subcontinent, but perhaps not by the hydraulic and civil engineers who presume that Indias water problems can be solved merely by building dams. Take the Stanley Reservoir at Mettur in Tamil Nadu, for instance, which is wholly dependent on the forests written about above. Such ecosystem services do not even figure in the calculations of economists and agronomists and, this could prove to be a fatal miscalculation for us all.

Yes, I want wildlife saved. Yes, India has multiple demands on resources. But in conclusion what I would like to point out is that the Cauvery Wildlife Sanctuary and the MM Hills represent one of the last-remaining contiguous chunks of dry forests that not only sustain endangered species in respectable densities, they also happen to be vital economic assets, without which even our GDP ambitions will prove ephemeral. Tiger conservation needs a landscape approach, because young adults, when they disperse from their natal areas, must find territories of their own that are capable of supporting adequate herbivore biomass, without which large carnivores cannot possibly survive. Restoring such once-marginal habitats offers cushioning for source tiger populations from well-protected forests such as BRT, and possibly also Sathyamangalam. It is therefore in the interest of both people and parks that we call a halt to destruction of our ecological security, because if we lose what remains of our dwindling forest cover, we will end up losing ‘everything.

Sanjay Gubbi holds a Masters's Degree in Conservation Biology from the University of Kent, U.K. He works on the protection of tigers and other wildlife in the Western Ghats of Karnataka, which has resulted in several successes. He is a member of Karnataka State Wildlife Board, and works as a scientist with Nature Conservation Foundations Western Ghats Programme.