Curing Conservation: One 'pandaemic' at a time

In the last 20 odd years, conservation has suddenly become a universal idea, whether it is about tigers, global warming or jam. Global in the sense that the internet is: accessible to a few, comprehensible to fewer, and useful to a particular stratum of the global village. Certainly less ubiquitous than coke, but perhaps more so than fast cars. Most people tend to think of conservation either as a noble cause that one ought to be committed to, or at least something good and proper to have in the right modest quantities.

Conservationists thus tend to think of themselves as noble missionaries, in quest of the Holy Grail of pristine wilderness or environmental sustainability, depending on which camp you belong to. Some, like the animal rights gang, act with religious zeal on their convictions. Others, like the biologists, tend to be cocooned in their discipline (with perhaps a slightly exaggerated view of its importance). And yet others, like the large international organisations, tend to be forces of neo-colonisation, not unlike the multinationals they purport to detest. Of course, without a doubt, there are noble individuals in these organisations (and who is to say there are none in Coke and Pepsi). It should come as no surprise then that conservationists have the entire range of human frailties at their disposal.

In our never-ending quest to create more confusion and further muddy the waters, we argue here that we should recognise the afflictions which affect the normal functioning of the body ecologic, just as any disease would. We have already critiqued various half-baked ideas such as Half-Earth (1) and compassionate conservation (2) and discussed megademophobia, an obsessive fear of population increase (1). However, as usual, we missed a trick. In fact, we missed the entire gamut of conservation diseases that affect this demographic. We attempt to make amends here with the Official Shockington Guide to Conservation Ailments And Diseases (OSGCAAD).

Vertabratitis in conservation is the expression of the broader problem of taxonomic chauvinism, or taxoplasmosis which makes certain taxa irresistible to biologists. The most common forms of this disease are mammaloma, an inordinate obsession with conserving mammals but preferably large ones.

A casual survey of the conservation load of lions and tigers (catatonia), elephants (pachydermatitis), apes (apendicitis), pandas (Long fo mi syndrome), and whales (orcaitis) demonstrates the widespread nature of this disease. But there are other forms as well, such as ornithalgia, which can be diagnosed by twitching in patients. And then there is herpes, which results in a compulsion to collect every frog (amphibiosis) or lizard (schincophrenia) or grab every snake (serpentitis). And then, of course, some harbour an unhealthy relationship with sharks, which is known as elasmobronchitis. 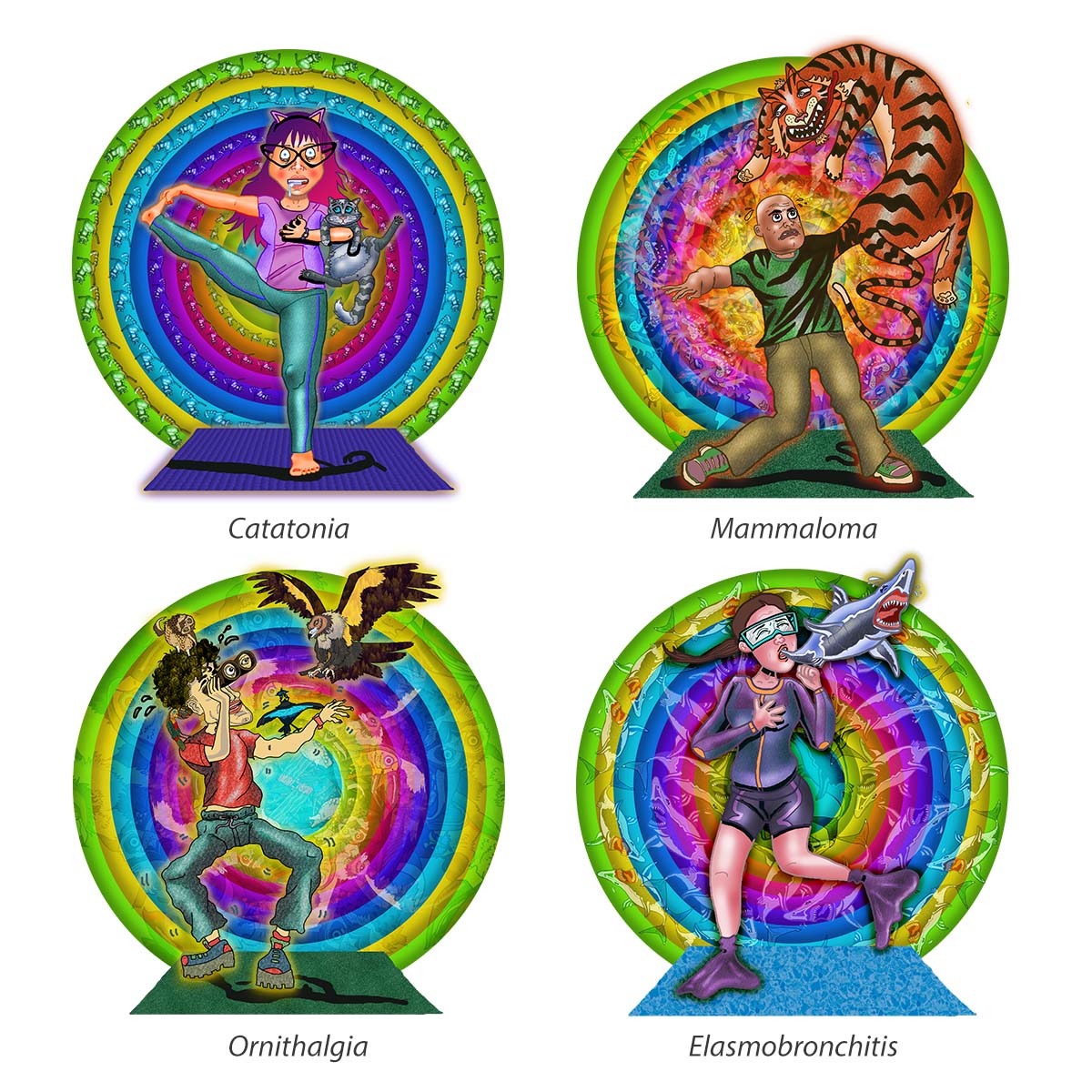 The obsession with sea turtles (chelora) is truly global and can be found in almost every coastal province in the world. This leads to claims that sea turtles are endangered, even if they are found in every ocean, sea and bay; a mania for moving eggs to hatcheries; and alarming levels of affection for the ridiculously cute hatchlings. Sea turtle people have long been at loggerheads about whether the symptoms include flat or leather backs, or turning green (or black in the east Pacific). It remains a ridley.

Though somewhat rarer, many cases of invertebratitis have been recorded too. Some suffer from lepidospirosis, and are seen hopping around with butterfly nets, while others have an inordinate fondness for beetles, and can only be cured by a coleonoscopy. The latter is not to be confused with an inordinate love of The Beatles, which we do not believe needs curing. And yet others can’t stop chirping about What Katy Did. A few harbour an unhealthy obsession with shellfish, resulting in Crustacea, which can lead to atrophy in their mussels causing them to clam up. And those who learn to dive get immediately infected with coralory disease.

Though several of the above diseases have been widespread and can be quite infectious, some individuals developed immunity, while others received a vaccine against taxoplasmosis in general. However, these individuals were then found to be susceptible to diversititis, which is the belief that greater diversity is always better. So tropical rainforests trump the tundra. And consequently, global conservation priorities typically focus on the tropical countries of the south that have the misfortune to be both poor and the confluence of some complex relationship between species richness and the environment. A common symptom of this disease is frequent use of the word ‘biodiversity’ and may manifest as hot spots. A rare reverse form of this disease, where victims actually prefer lifeless landscapes, does occur and is known as bipolar disorder.

The above traits tend to be mutually exclusive. It is rare to find someone presenting with catatonia and orcaitis at the same time. Although they may both twitch. But a common chronic condition that can co-occur with all the above is discoveritis, which is the relentless drive to find new species. Almost 20,000 new species are described each year, so this is quite a common condition, and advances in molecular taxonomy are making the progression of this disease quite relentless. Small close family groups of marmosets, chimpanzees, and gibbons are now discovering that they are, in fact, barely related at all.

Aunts are a different species from their nephews and nieces, and a whole genus distant from their great grandparents. This has the obvious advantage of creating instant rarity. Once abundant populations can be rendered critically endangered with the swipe of a swab. The late Georgina Mace even complained that it was impossible to work out extinction trends in primates because of the plethora of new species.

One of the most crippling diseases is animalia. This goes far beyond vertebratitis and diversititis in conferring rights upon individuals. In its extreme form, this can extend to granting person-hood to every plant and animal that ever lived, and vice versa. (3) The symptoms can include blurry vision, confused behaviour, excessive emotionality, and a poor diet.

And then there are disorders whose exact cause is not known. Prejaculation (a self-explanatory term) is a knee jerk response to just about anything, which occurs well beyond the conservation community. In this demographic, frequently proclaiming the imminent extinction of a species (usually in the press) is an obvious symptom. Many species, particularly large iconic vertebrates, have had to draw on Mark Twain to state that the ‘reports of [their] death [were] grossly exaggerated’. Other, tinier, unknown ones have slipped quietly away into that good night, but who cares. 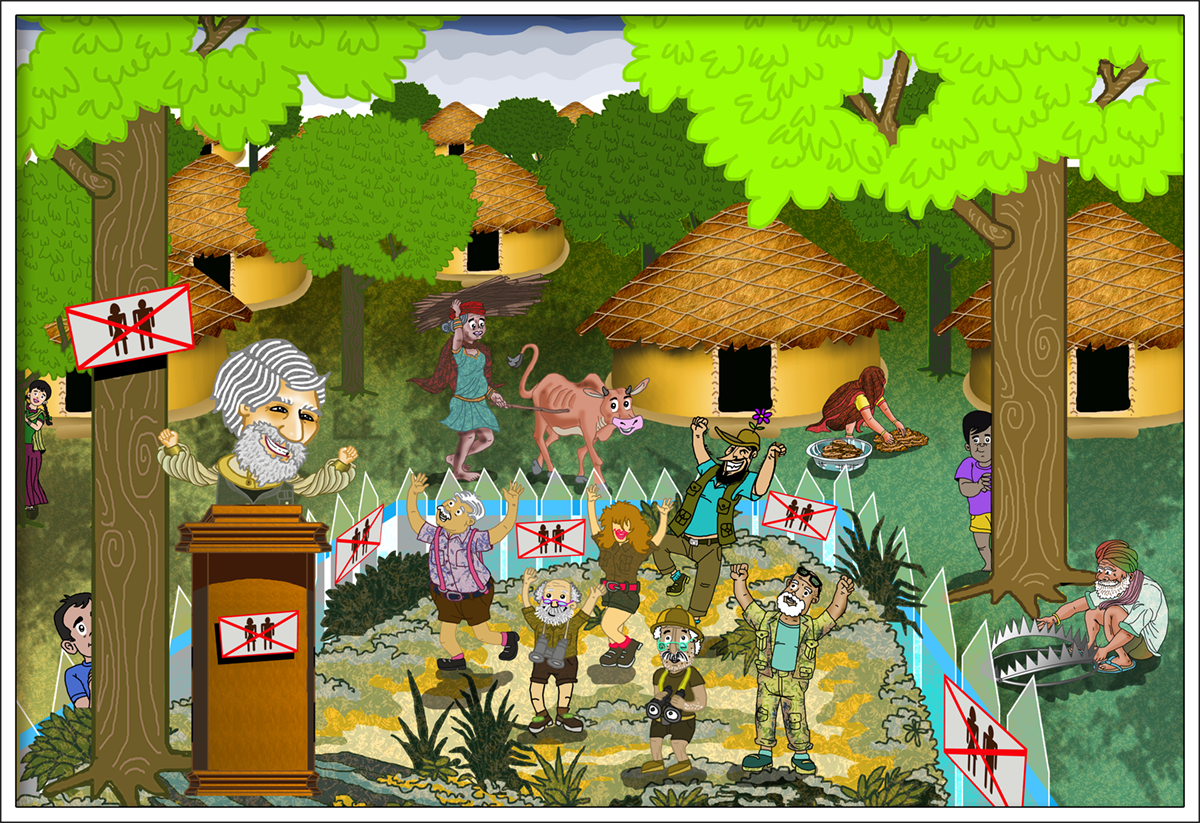 And finally, there is Pristianity, the predominant affliction of 20th century conservation, the desire to set aside exclusionary protected areas, exclusively for fellow Pristians. Some might argue that this is more a religion than a disease, but honestly, we can’t tell the difference. Believed to have originated in the Wyoming province of the People’s Republic of America, this has spread to all countries of the world. While some believe it may be in remission, there are particularly virulent forms that still surface from time to time. This, if anything, is a pandaemic.

Unfortunately, many people do not take these diseases seriously, or refuse to get vaccinated or just refuse to stay home when they should. Many of these diseases have had super spreaders, and several have seen community transmission. Some are in remission, others are not. We call here for a formal recognition of these conditions (preferably by the use of the phrase ‘well then son, you’ve got a condition’), so that one can institute a programme of treatment and rehabilitation. This will inevitably cost bazillions of dollars of taxpayers’ money. But if it helps build resilience to more diseases that might jump from the wild into human society, then we would have done a good thing. We think.

Epilogue
We attempted to publish this in several conservation journals without any success. We conclude that conservationists do not possess a humerus.

This article was originally published in Current Conservation magazine.

Kartel Shockington is a failed comic book creation with special powers of rapid hair loss. He sometimes appears as Kartik Shanker, and at other times as Dan Brockington.

Amit Kaikini is a freelance illustrator, with a decade of experience in digital advertising. He loves to explore Sci-Fi and Horror genres, with an inclination towards nature and a desire for surreal storytelling.