Every year for the past half-century, April 22 has been commemorated as Earth Day. Starting out as a pivotal movement in 1970, the Earth Day Network (doing business as EARTHDAY.ORG) is now a global movement with one mission – creating a greener, naturally wealthier planet for all. An ongoing theme of the network is ‘Restore the Earth’, including soil regeneration, waste management, species protection, and ofcourse water source rejuvenation. This Earth Day 2021, the Earth Day Network released an ebook ‘Restore our Earth Volume 1- Rejuvenating Water’, highlighting innovative strategies and projects across India that have helped manage and restore water sources effectively. We bring you an excerpt below. The full report can be accessed here.

ACCELERATING THE REVIAL OF SPRINGS Do you recall stopping your car on a winding road in hilly terrain to taste the refreshing water from a spring? According to the last estimate, there are five million springs in India, of which nearly three million are in the Indian Himalayan region. This area spans 10 Indian states, four hill districts and is home to over 50 million people. Local populations refer to this natural phenomenon by different names – dhara, mol, kuan and chashmanaul – but what’s in a name? Call it what you may, the point is that free-flowing spring water is a lifeline for them. It is their fundamental source of water for domestic use, cattle rearing and agricultural needs. Wildlife also drinks from these natural fountains.

Over the past century, there has been a rapid decline in springs supplying mountain-fresh water. Erratic rainfall patterns, seismic activity, deforestations and changing land-use patterns from agricultural to infrastructural needs, have significantly impacted these mountain aquifers, resulting in reduced columns of water in the once gurgling springs. When a nearby spring starts dying, it is the rural women who suffer the most. With their hands already full collecting firewood, providing fodder for cattle, and other domestic chores, they then have the additional burden of fetching water from sources farther from their homes.

The state of Sikkim comprises the Eastern Himalyan Range. As in other regions, the adverse effect of climate change in rainfall threatens the delicate, holistic balance that once stimulated its ecosystem. Furthermore, as the terrain is mountainous, only about 15 per cent of rainwater percolates into the soil. The impact of this change on the lives of the Sikkimese people gained wide attention during a seminar organised by the World Wildlife Fund (WWF) in 2008, when a group of local women spoke of the daily drudgery they have to suffer because of lack of water. 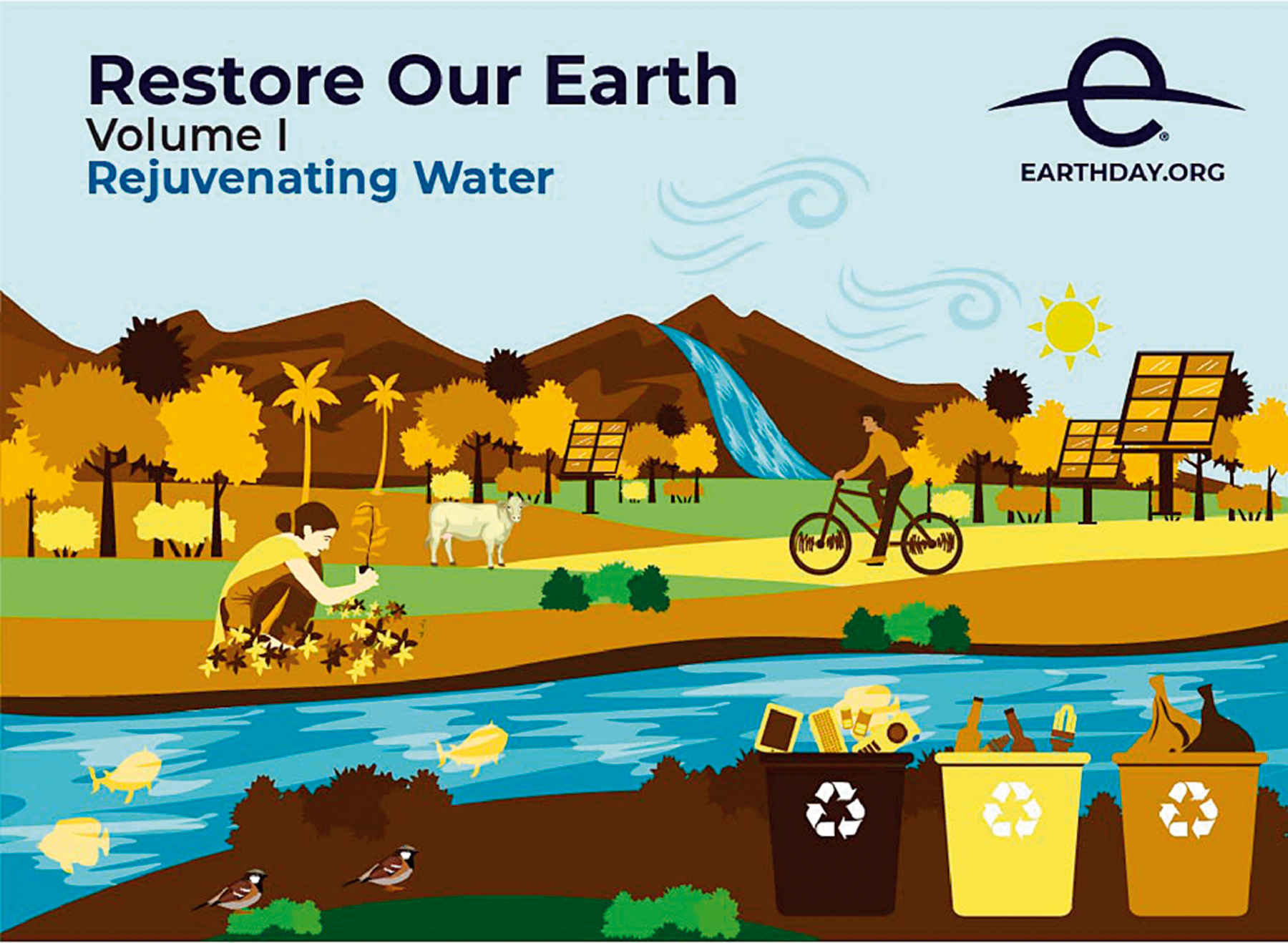 The Rural and Development Department (RDD) of the Government of Sikkim conceptualised the Dhara Vikas initiative to revive the state’s dying lakes, springs and streams. The initiative aims to ensure water security by breaking the cycle of abundance and scarcity.

Recognising this need, the Rural and Development Department (RDD) of the Government of Sikkim conceptualised the Dhara Vikas initiative to revive the state’s dying lakes, springs and streams. The initiative aims to ensure water security by breaking the cycle of abundance and scarcity. It also seeks to enhance the hydrological contribution of the mountainous ecosystem as a water tower for the people, ensuring disaster risk management by reducing landslides and floods. It is supported by the central government sponsored Mahatma Gandhi National Rural Employment Guarantee ACT scheme, with technical support from other government agencies as well as organisations such as WWF India; People’s Science Institute, Dehradun; the Advanced Centre for Water Resources Development and Management, Pune; and Arghyam, Bengaluru.

Implementation of the Dhara Vikas  initiative focussed on executing a scientifically robust strategy and on generating awareness. Micro-level planning involves discussion with the local populace. All work-related resolutions are taken up in the Panchayats and decided upon at the village level.

Capacity-building measures include programmes organised in coordination with various NGO stakeholders to develop specialised knowledge and skills in areas such as rainwater harvesting, geohydrology (the science that deals with the character, source and mode of occurrence of underground water) and spring discharge measurement. Global Positioning System (GPS) tagging and laying of staggered contour trenches and ponds also helps. The RDD identifies the recharge areas of various springs and streams based on hydrogeological assessments, in order to control runoffs and increase permeation to enhance groundwater recharge.

According to the RDD, Dhara Vikas has significantly helped recharge lakes and revive several springs in Sikkim. As many as 70 are now revived. Most of them are in Kaluk, Ravangla, Sumbuk, Jorethang and Namthang. Further, three dried-up lakes, Dolling, Datum and Karthok are revived to their natural states. Other lakes, such as Nagi and Tamle Pokhari, have been converted into recharge structures. The RDD is working on two dried-up lakes in West Sikkim, Resum and Suke Pokhari, to revive them as well. It has also led to reforestation of seven hilltop forests at Simkharka, Sadam, Tendong, Maenam, Gerethang, Chakung and Sudunglakkha. With the revival of lakes and springs and the increased awareness, villagers in the area have started constructing water storage tanks. They use the day-time discharge from springs for irrigation, while the night-time discharge is used in rotation to fill personal tanks.

Another significant impact of the initiative was the creation of the village spring atlas web portal, which provides information on more than 1,500 springs and can be accessed at https://sikkim-springs.gov.in/ . Increased irrigation has encouraged farmers to cultivate new crops such as beans, radish, cauliflower, cabbage and chillies, along with paddy and tomatoes. Many perennial garden fruits, such as guavas, bananas, oranges and litchis are now cultivated.

As this initiative involved the implementation of a new concept, many lessons were learnt along the way. These include the fact that Sikkim’s Himalaya may not have a confined aquifer system for individual springs. It was noted that the spring-based approach did not significantly result in improving spring discharges. Consequently, a hill-landscape approach was used. This took into consideration all the springs abutting the entire hill or the extent of the hill range. To recharge the aquifer, it was assumed these springs were interconnected as a network of cracks and fractures developed over Sikkim’s metamorphic areas. The recharge area in the former approach, which was two-three hectares, has now increased to more than 20 ha.  through the latter one. Trenches for groundwater recharging were initially dug without adherence to geohydrological requirements. Some trenches were dug on terraced fields instead of sloping land, while others were dug without supervision, to ensure maximum trapping of surface runoffs, thus making them ineffective.

The Rural and Development Department (RDD) of the Government of Sikkim conceptualised the Dhara Vikas initiative to revive the state’s dying lakes, springs and streams. The initiative aims to ensure water security by breaking the cycle of abundance and scarcity.

Similarly, many horticultural and forestry activities, initially undertaken to improve groundwater recharging, did not show any positive outcomes. In time, it was realised that trenches and ponds had a more significant impact on groundwater recharging and soil moisture than plantations, which lose moisture through evaporation. In certain locations, the lean period discharge was not recorded, making any conclusive impact assessment impossible. All these issues are being addressed.

The Dhara Vikas initiative has enabled about 900 million litres of annual groundwater recharge. It is recognised with several awards, including the Prime Minister’s Award for Excellence in Public Administration (2011-2012); the Skoch Gold Award; and the National Groundwater Augmentation Award (2010-2011) to WWF-India for technical support, amongst others.

“More than 20 million people participated in the first Earth Day in 1970. This was at a time with no computers, cellphones, internet or social media. We only had one telephone to make out of town calls on. This was all down by mail, but it had an enormously resounding cord with the public,” says Denis Hayes, founder of the Earth Day Network.

Watch this video as he shares the origins of the Earth Day Network and lessons gathered over his five-decade journey in gathering global momentum for environmental protection. This video was part of ‘Seek Sanctuary – Reboot The Planet’ online sessions, released by Sanctuary Nature Foundation in partnership with BookMyShow, for Earth Day 2020.