Forensics Vs. Wildlife Crime: A Battle That Must Be Won

Wildlife crime has ballooned into a multi-billion-dollar industry that has not only caused species extinctions on a mass scale but has also devastated economies, lives, and livelihoods. In 2016, the annual value of the illegal wildlife trade was estimated at up to US$23 billion by the United Nations. A large percentage of this blood-stained money is estimated to be funding global terror groups and militias.

Unfortunately, wildlife investigations continue to fall short because of poor understanding and faulty handling of evidence, lack of infrastructure, training, support and funding. In India, low conviction rates and poor quantum of judicial punishment make wildlife crime a low-risk-for-high-reward transaction. Enforcement agencies are caught in a perpetual arms race of sorts with the ever-evolving modus operandi of wildlife crime perpetrators. If they do not adapt, they will continually be a step or two behind wildlife trade operatives.

Fortunately, in recent years, forensic science (see also Keshav Kumar) is fast becoming our strongest ally to stop and stem the illegal wildlife trade, the world’s fourth largest and most profitable organised crime industry, ranked only below drug, human, and arms trafficking. “Every contact leaves a trace,” states the ‘Locard’s Exchange Principle’, a simple, powerful premise on which forensic science rests. Any crime scene is replete with evidence that can be scientifically interpreted by a trained eye. Forensic analysis can help investigating agencies build a water-tight case that can withstand scrutiny in the court of law and bring perpetrators to justice.

TELL US WHAT FORENSIC SCIENCE REALLY IS…

It is an amalgamation of sciences used to establish links between the criminal, the crime scene, and the crime. Forensic scientists are trained to put evidence through a battery of tests to derive information to advance an investigation.

As with any other science, reliable results require time and patience. Unlike the glamourised version of forensics that TV shows have popularised (commonly referred to as the CSI effect), it is not a magic wand that will provide all the answers needed in the time frame of a single episode! Forensic science is powerful but has its limitations on the kind of information it can glean from evidence, and the process can take weeks or even months.

WHY IS THE BUSINESS OF WILDLIFE CRIME SO LUCRATIVE? WHAT IS DRIVING IT?

There are systemic issues behind this. Wildlife crime is largely ignored by policy makers. Stringent policies and suitable budgets to combat crime are lacking. Enforcement agencies are inadequately trained and/or set up for wildlife crime investigations, making it a secondary or tertiary priority for them. Wildlife crime cases that do reach the court are often so weakly constructed that they are dismissed prematurely or result in weak sentences. Collectively, these actions create a vicious cycle that allows wildlife criminals to believe that even if apprehended, they will get away with an easy sentence or warning. Wildlife crime is therefore at an all-time high and with each passing day, more species are falling victim. 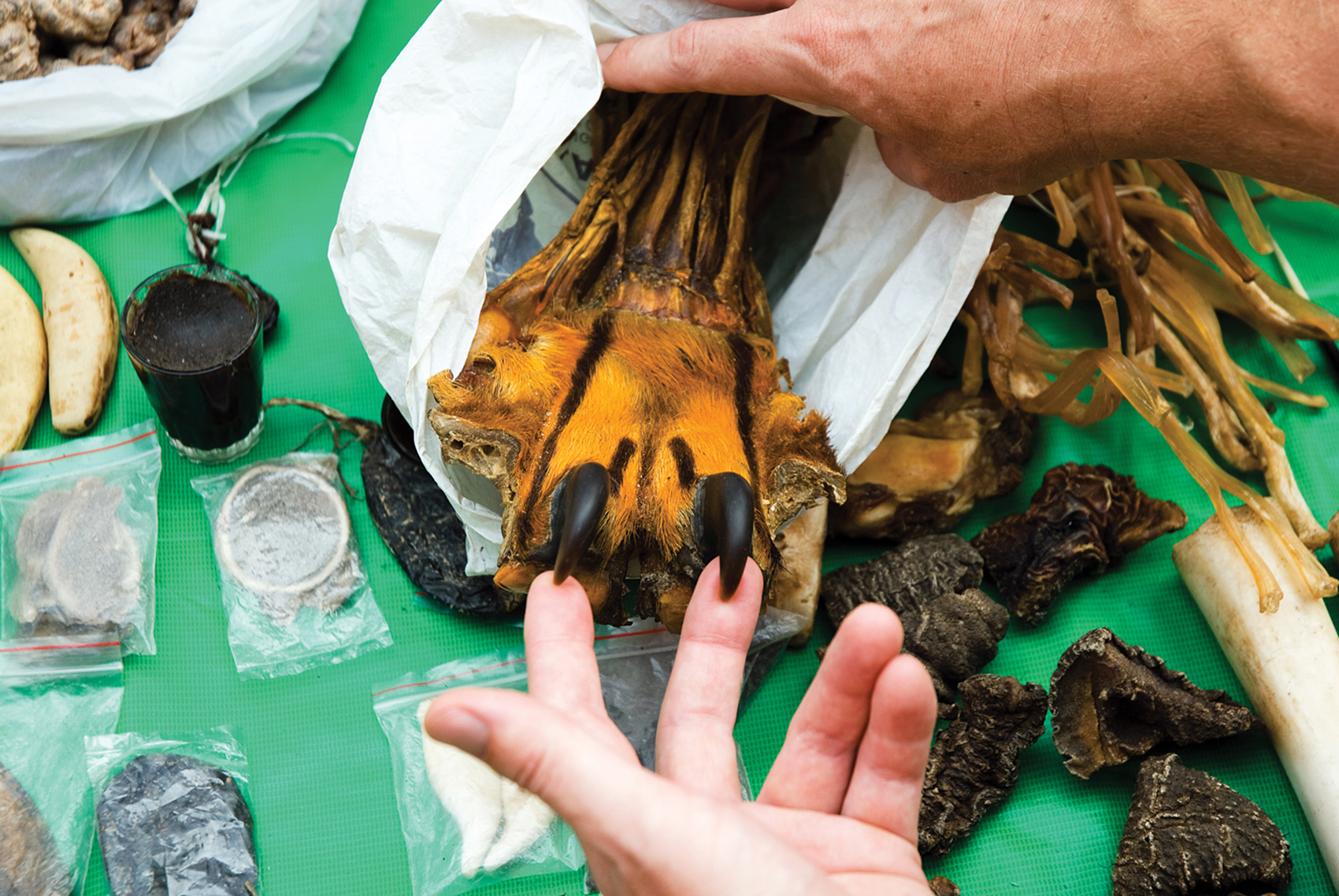 In Myanmar, body parts of tigers and other rare and endangered wildlife species are in huge demand. This is true of several Asian countries, largely for use in traditional Chinese medicine. Photo: Dan Bennett/Public Domain.

WHAT IS THE POWER OF IMMACULATE EVIDENCE IN THE COURT OF LAW AND HOW DOES FORENSICS HELP TO CONSOLIDATE IT?

Just as a doctor would prescribe medicine based on the nature and severity of symptoms presented by a patient, the Criminal Justice System is designed to prescribe sentences based on the evidence quality and factual strength established by the investigating officers. Evidence is paramount to the delivery of justice.

A suspect is deemed innocent until proven guilty. No matter how compelling the testimony of investigating officers may be, the judge cannot take it into consideration unless it is corroborated by sound evidence. Here is where forensics makes a difference. Forensic reports prove evidence to be reliable and establish facts beyond reasonable doubt. However, if the evidence itself is thought to be compromised (a tactic employed frequently by defence lawyers), then its value could be nullified.

THE CONVICTION RATE IN WILDLIFE CASES IS DISMALLY LOW IN INDIA, LESS THAN FIVE PER CENT. WHERE IS THE LAW ENFORCEMENT AND JUDICIARY FALLING SHORT?

The hands of both are tied. Enforcement officers must be more aggressive in their investigations and ensure strict implementation of wildlife law. Judges need to be sensitised and given the tools they need to pronounce strict rulings. We can make a significant impact only when wildlife crime is tackled with the gravity it truly deserves. Policymakers will then have little choice but to create better measures and allocate sufficient budgets to combat wildlife crime. Surely, conviction rates are then bound to drastically increase, and the law will be a deterrent for traders and poachers. 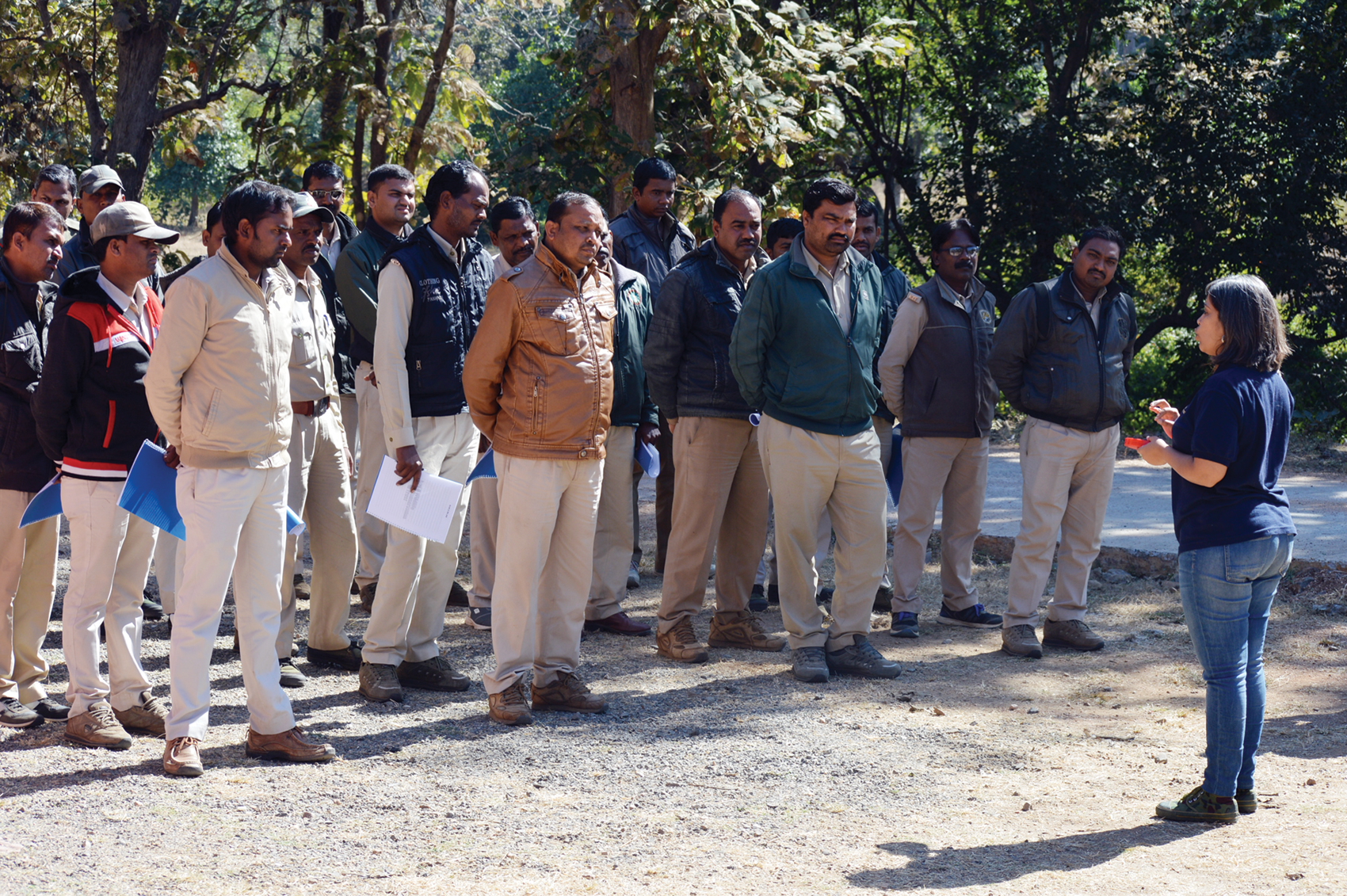 WHICH ARE SOME OF THE FORENSIC LABORATORIES EQUIPPED TO ASSIST IN WILDLIFE INVESTIGATION IN INDIA?

Since wildlife crime investigations are pivoted on the accurate identification of the species targeted by the criminal, these labs are focused on DNA or morphological evidence. Sometimes, such identification may not be possible due to the paucity of ‘standards’ that enable forensic scientists to compare their results. Also, human evidence from wildlife crime scenes (such as clothing, firearms, vehicles, etc.) are required to reconstruct the crime scene and link the criminal(s) to it. However, forensic labs that work on human crimes are over-loaded with case work and often cannot deliver timely reports.

Of late, government agencies have taken serious cognisance of the need for both wildlife and human forensics facilities. The Centre and some states have begun building multi-disciplinary wildlife forensic labs; but their current development pace leaves much to be desired. 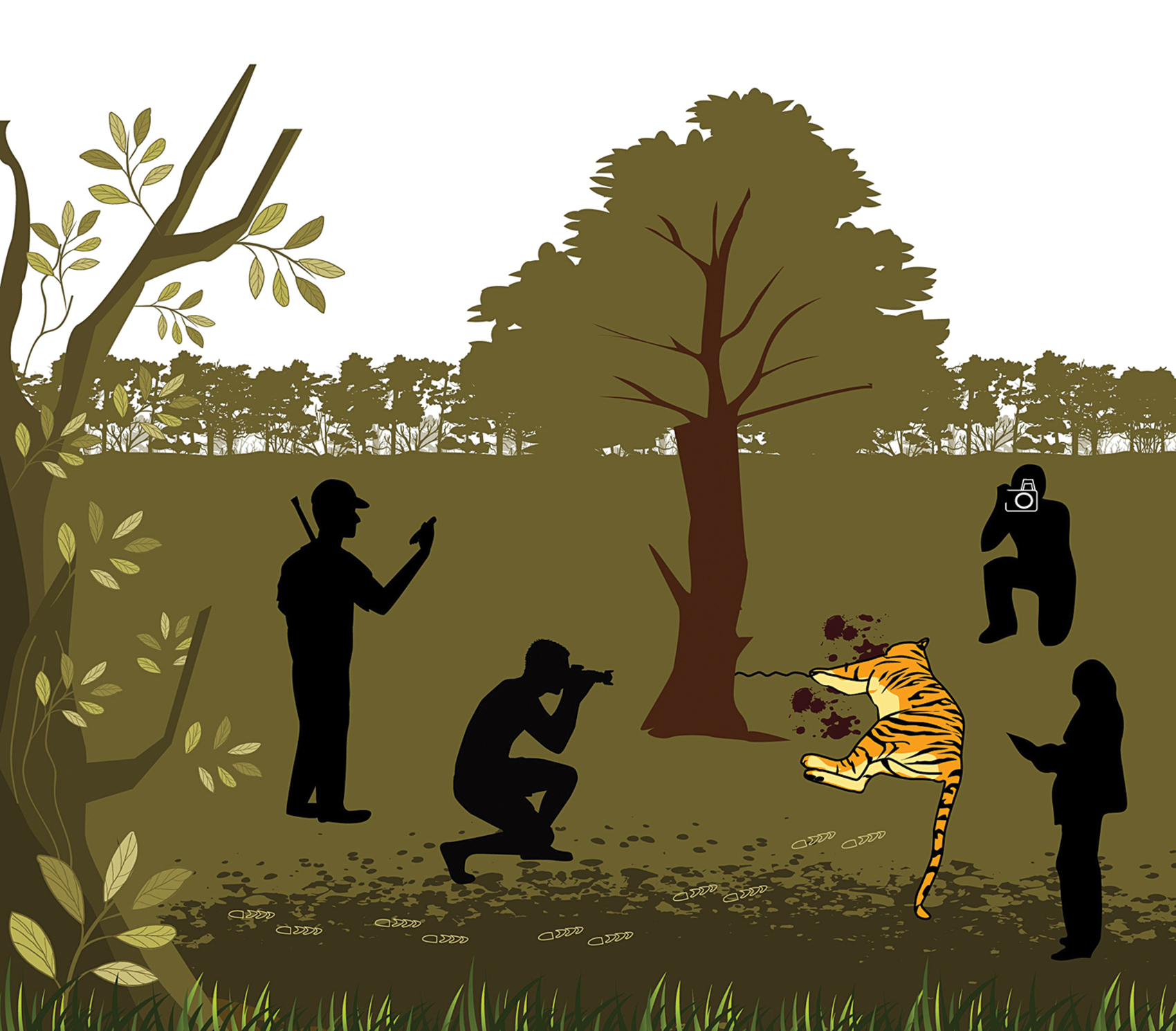 TELL US ABOUT WCT’s CRIME INVESTIGATION AND FORENSICS TRAINING PROGRAMME FOR FOREST STAFF ACROSS THE COUNTRY.

WCT has been working from the ground up to improve the capacity of forest staff to investigate and combat wildlife crime. Since forest staff, particularly forest guards, are the first responders at wildlife crime scenes, their actions there determine the case outcome. Lack of appropriate training has led forest staff to repeat the same errors at crime scenes that their predecessors made. To correct this, we have developed training programmes on evidence handling, and how to utilise evidence and forensic reports. All trainees are given kits to avoid crime scene tampering and to collect evidence scientifically. We now find that because of such training, guards are no longer intimidated by evidence.

We have held these programmes in several tiger reserves across the Central Indian Landscape and in other key tiger habitats. We expect that with increased implementation, both within and outside Protected Areas, forest officers will maximise the quality of evidence gathered to build strong cases with their improved investigative skills.

YOU HAVE ALWAYS STRESSED THE NEED FOR HEIGHTENED UNDERSTANDING OF WILDLIFE LAW AND CRIME AMONG LAWYERS AND JUDGES. WHAT IS WCT DOING ON THIS FRONT?

Along with policy makers and enforcement officers, lawyers and judges are key to curbing wildlife crime. In collaboration with state-level judicial academies, WCT conducts regular sensitisation workshops for judges, especially at sessions courts. We provide bursaries to ensure that good lawyers are available to Forest Departments. We have also created a moot court competition for law students to increase awareness about wildlife conservation and its challenges and to draw them to wildlife law practice. We hope that as a result of this, wildlife law is taught as a mainstream subject in Indian law schools and that sound legal talent is routinely available to enforcement agencies. Ultimately, this will result in the kinds of judgements needed to curb the trade. 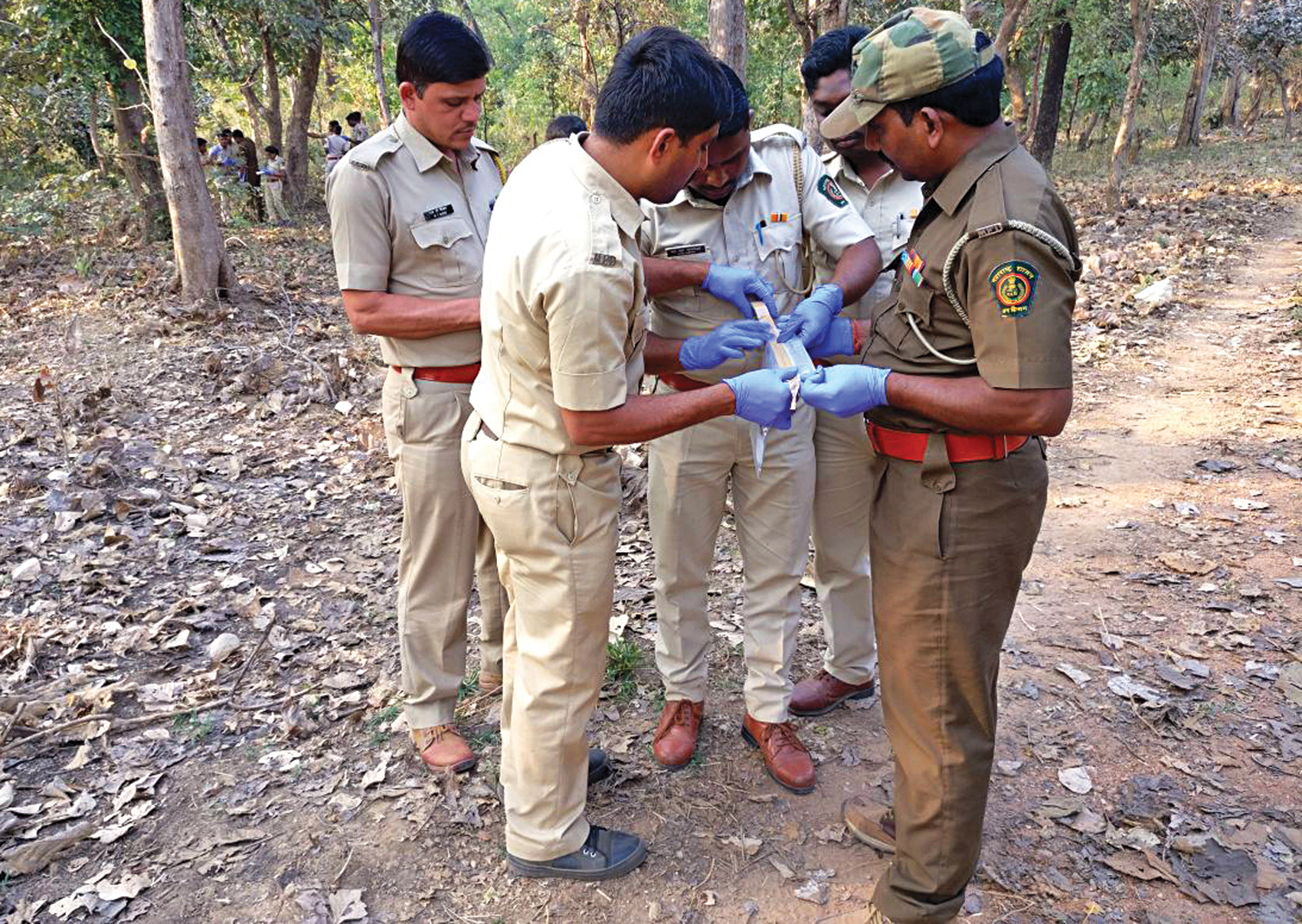 THERE IS MORE TO FORENSICS THAN DNA PROFILING AND FINGERPRINT ANALYSIS. CAN YOU BRIEFLY TOUCH UPON THE DIVERSE APPLICATIONS OF THIS FIELD?

Forensics is an umbrella science. Sometimes a single case could encompass several sciences and even non-sciences, such as art, accounting, and architecture. For crimes such as murder and theft, investigators rely greatly on physical evidences from the crime scene, such as cigarette butts, poisons, firearms, and even the victim’s body. Along with forensic DNA analysis, this could involve the use of disciplines such as forensic botany, dentistry, toxicology, medicine and ballistics. Recently developed forensic applications include cyber forensics and forensic accounting.

In wildlife crime investigations, there is great scope for application of varied forensics – both old school and new age. Depending on the crime, forest officers may need a forensic lab to analyse animal carcasses and parts, ammunition, vehicles, cell phones, weapons, identification documents, and more. Depending on the strength of the resultant information drawn, officers can create a strong case against the suspects. When possible, they could possibly go a step further and use new-age forensic techniques to investigate information and/or money exchange between the suspects and possible traders or buyers. Thus, forensic tools can be applied to all stages of the wildlife crime supply chain.