If approved, the Hubballi-Ankola railway line will fragment large forest patches and impede large mammal movement in the Western Ghats of Karnataka.

Since 2008, the Hubballi-Ankola Railway line Project (HARP) proposal has alternately been approved and rejected, shuttling between the State Board for Wildlife (SBWL) and the National Board for Wildlife (NBWL), and the High Court and Supreme Court. Fast forward to the present: in March 2020, when India was under lockdown and grappling with the coronavirus pandemic, the Karnataka State Board for Wildlife cleared the project. Subsequently, on June 18, 2020 and on July 14, 2020, the Karnataka High Court stayed the clearance. If the past is any indication, this project is likely to raise its head once more.

The proposed route for the railway line is from Hubballi in North Karnataka to the port of Ankola. The line will run through the Western Ghats of Karnataka, and will require the clearance of 595.64 hectares of forest (around 1.9 lakh trees) in the Dharwad, Karwar and Yellapur districts.

A recent study that estimated forest fragmentation in India because of linear infrastructures (such as roads and railways), found that the railway line will pass through 10 large forest patches in the Western Ghats of Karnataka, which together form an area of approximately 2000 km. sq. The railway line will result in these 10 large patches being split into smaller patches. The lead author of the paper, Rajat Nayak says, "Some of these forest patches may be too small (less than one hectare) to sustain biodiversity in the long run." 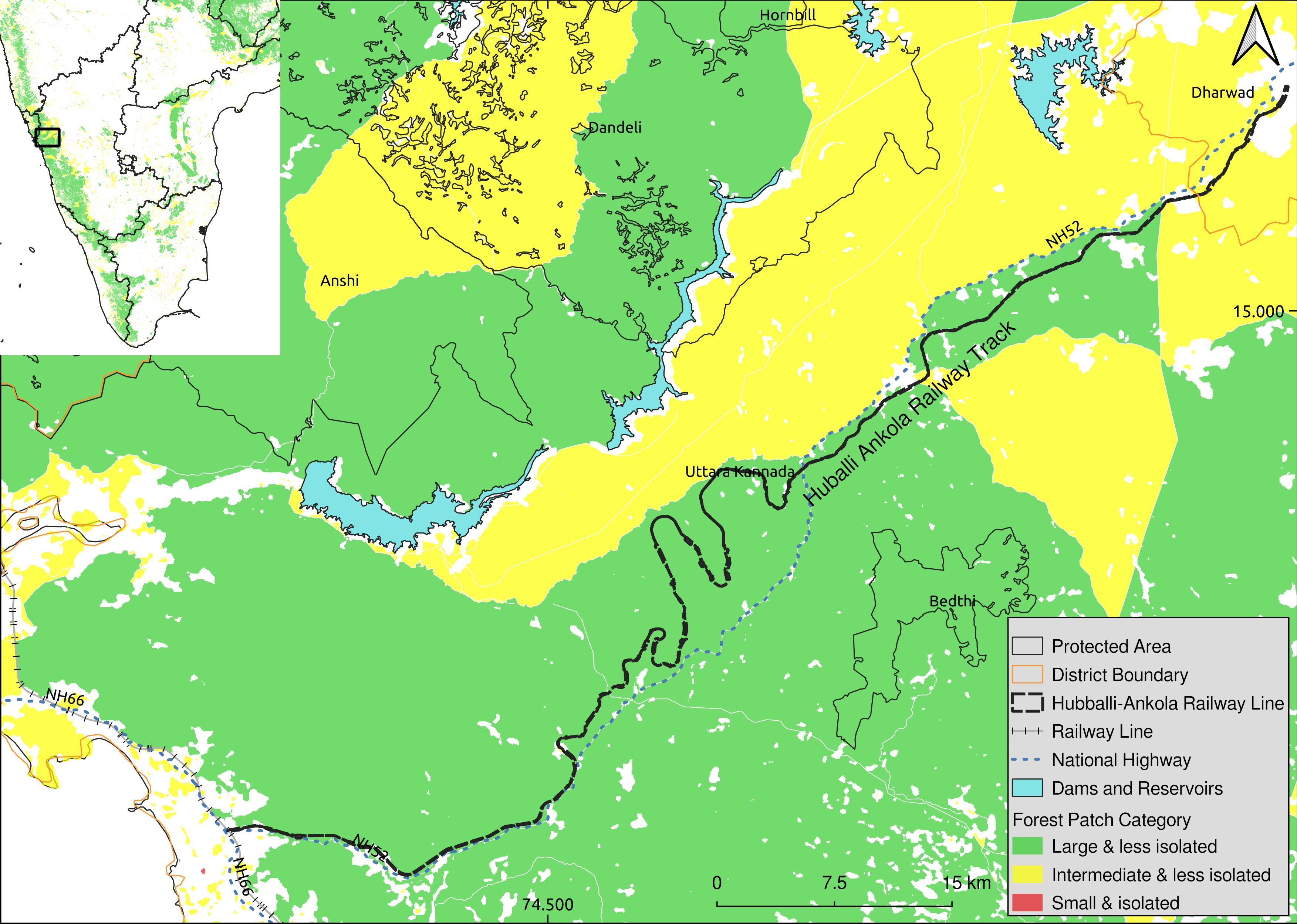 A separate study evaluated permeability to movement for large mammals in Central India and the Western Ghats - two conservation priority landscapes in India. This study simulated the movement of five species - the elephant, gaur, leopard, sambar and sloth bear - in the Western Ghats, based on expert inputs and satellite imagery of landscape features.

As the lead author of the study, I overlaid the proposed railway line on the study results to understand its potential impacts on large mammal movement. 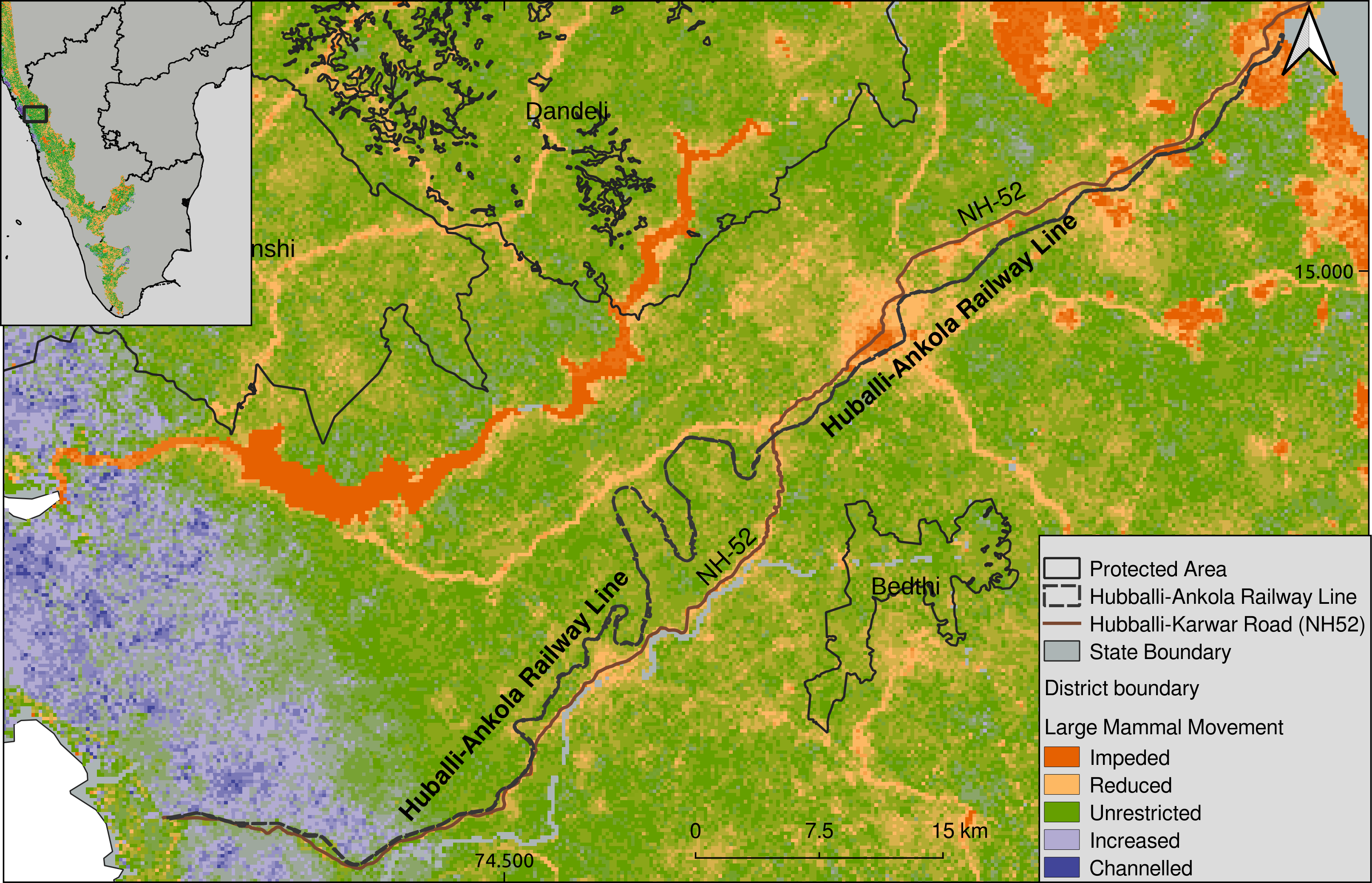 The Huballi-Ankola railway line will run parallel to the NH52 Huballi-Karwar road and will likely pose additional resistance to north-south movement between the Kali Tiger Reserve (Dandeli-Anshi Tiger Reserve) and the Bedthi Conservation Reserve. The railway line will also pass through elephant movement paths in the region, as highlighted in the Environment Impact Assessment study carried out for the project. Additionally, it will cut through the Dandeli-Anshi-Sharavathi tiger corridor as identified by the National Tiger Conservation Authority (NTCA) and the Ministry of Environment, Forest and Climate Change (MoEFCC).

Contiguous forest patches are essential for the viability of large mammals such as elephants and tigers, which undertake long distance movements (elephants: approximately 193 km., tigers: approximately 124 km.), to feed, mate and find new territories. Connected forest patches are key to ensure persistence of their movement, which in turn ensures viability of their populations.

The impacts of habitat fragmentation - the breaking up of natural habitats into smaller and more isolated pieces, separated by human-modified habitats - have been studied in India and across the world. These studies show strong and consistent evidence of the cumulative effects of habitat fragmentation, which results in reduced biodiversity and key ecosystem processes, a loss of old large trees, reduced carbon sequestration, increased human-wildlife conflict and increased likelihood of zoonotic disease outbreaks. These impacts cannot be mitigated through compensatory afforestation or mitigation structures.

The study on habitat fragmentation in India found that the mean size of forest patches—an area of contiguous forest— is only 2.2 km. sq., with more than 90 per cent of forest patches being less than one square kilometre. Of the assessed Protected Areas in the study, 70 per cent are part of large and intact forests, highlighting their unmatched role in decreasing degradation of forests. Yet, only five per cent of India's forests are protected.

The recent report on climate change in India released by the Ministry of Earth Sciences stresses on the importance of forests for carbon sequestration, resilience to flash floods and droughts, and supporting biodiversity. Considering we are at a crossroads in our response to the climate emergency, it is crucially important that the government heeds this scientific advice from its own ministry, and does not work in siloes. It is imperative that the focus shifts to infrastructure with minimal environmental impact, that can revive the economy and generate jobs.

It is amply evident that the environmental destruction caused as a result of linear infrastructure projects in forests, such as the proposed Huballi-Ankola line, far outweighs any short-term benefits to the economy. Local communities are likely to only see minimal benefits given that the railway line is proposed to be a freight-only means to transport iron ore. Interestingly, the initial NTCA report of the project states that production of iron ore in the region has decreased, which further questions the requirement for the railway line.

The reasons given for the rejection of the Hubballi-Ankola railway line have persistently highlighted the unmitigable impacts of the project on biodiversity, hydrology and soil erosion, given its location in the Western Ghats of Karnataka. It remains unclear then, why this project is repeatedly considered for clearance. Persistent engagement with this project since 2008 is clearly a waste of time of the wildlife board members, lawyers, local people, politicians and researchers, alike.

Anisha Jayadevan is an ecologist studying the impacts of habitat fragmentation and land-use change on animal movement. She co-organises @cafeoikos and posts as @anishafishtoe on Instagram. The author thanks Srinivas Vaidyanathan for his inputs. The results of both studies are available as interactive maps on www.indiaunderconstruction.com.