Bramhapuri, Maharashtra: A nippy November night in 2019. Kishor Bansod is circled by a rapt audience of more than a hundred. A mic in one hand and a bucket of water in another, he pours into a one metre high black, cylindrical vessel. The burner, at the bottom of the vessel, fueled by two handfuls of toor dal stems, some cow dung, and a little bit of firewood, begins to heat the water, which soon pours through a pipe into a bucket. A volunteer takes this around and people in the crowd dip their fingers in. The water is hot, perfect for bathing.

Offered by the Wildlife Conservation Trust (WCT) at a 75 per cent subsidy, the heater, locally known as bumbb, consumes just one-third of the firewood than a traditional stove to heat the same quantity of water, and is at least four times faster too. It works perfectly, even when fueled with crop residue, cow dung cakes, dried leaves, and negligible quantities of firewood, thus greatly reducing the need to collect wood from the forest.

The Bramhapuri Forest Division is contiguous with one of India’s finest tiger-bearing Protected Areas, the Tadoba-Andhari Tiger Reserve in Maharashtra, and harbours a healthy population of tigers and other wildlife. It also has over 600 villages. People here share the landscape with wild animals, and depend on the forest for their daily needs, most importantly, firewood. The act of heating water for bathing is singularly responsible for 31.8 per cent of daily firewood usage time in Bramhapuri. 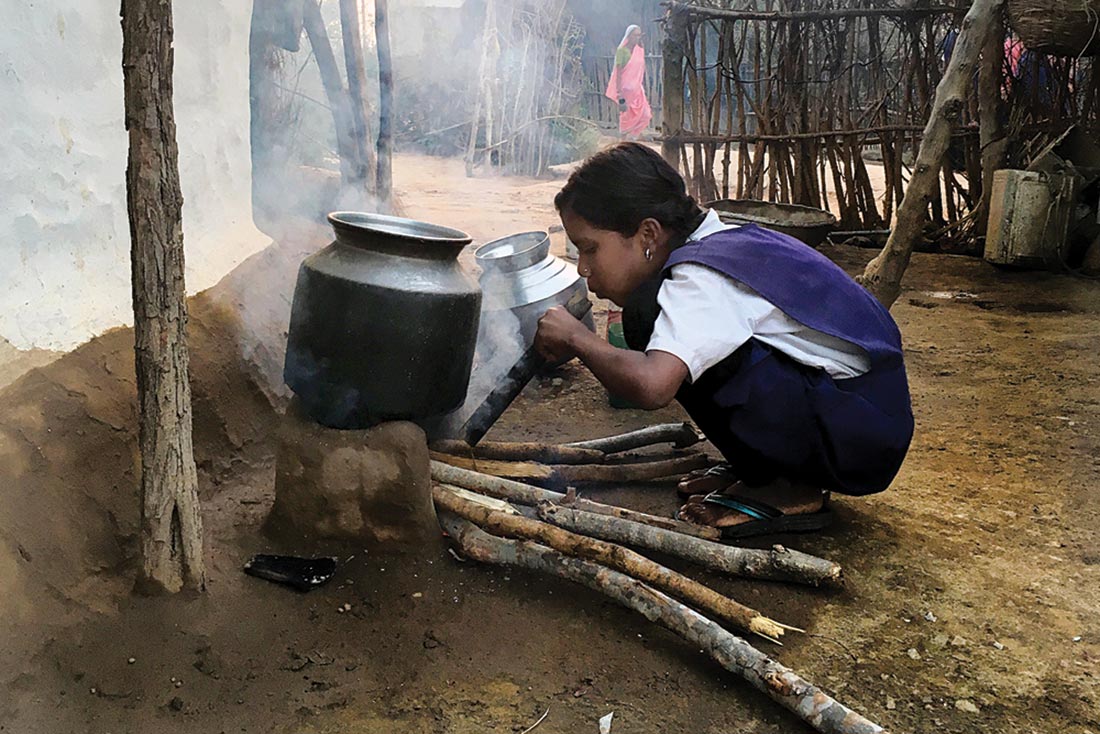 From two pilot villages in September 2019, WCT has now equipped nearly 2,500 households in 10 villages with these heaters. The bumbb has reduced fuelwood collection visits to the forest by 28 per cent, thereby also reducing the women’s workload and potential exposure to wild animals. Observing the successful adoption of the water heater by the people, in January 2022, the Maharashtra Forest Department partnered with WCT to distribute them to other forest-bordering villages around Tadoba.

The following are excerpts from an interview with colleagues from WCT’s Conservation Behaviour team, that is responsible for the conceptualisation and implementation of this novel community-oriented-conservation-project.

How did it all begin? What was the first question that you set out to answer?

Aniket Bhatkhande (AB): It all began on the solid foundation of camera-trapping and GIS work carried out by WCT’s Aditya Joshi in Bramhapuri. The camera-trap data identified vulnerable villages as well as frequent and high-risk behaviours that affect the community and the environment. We chose firewood usage as our initial inquiry as nearly 99 per cent of households depend on firewood and continue to face problems associated with its use, such as air pollution and drudgery. The Land Use Land Cover Change, detected through satellite imagery, revealed a constant reduction in forest cover that increased the vulnerability of the community dependent on it. For a holistic understanding of firewood usage, we collected data on the community’s positive and negative interactions with their environment. This is the approach that WCT’s President Dr. AnishAndheria has nurtured, which entails long-term intersdisciplinary inquiries with the aim of contributing to the policy and management of ecosystems.

We must also mention the HT Parekh Foundation, which supported the research as well as the intervention in its formative phase. KCT Group contributed in scaling up the project, and BNP Paribas India Foundation is now supporting the expansion of the project across the district.

How did concepts of economics come into play in understanding why and how people collect and use firewood?

AB: Economics is the science of resource allocation. It helps figure out the best way to use resources so that everyone benefits. Microeconomics involves studying these decisions at the scale of a household. Firewood collection and usage are decisions influenced by factors such as income, access, availability of alternatives, food taste preferences and attitudes towards the resource. Also, firewood collection and usage primarily being a woman’s task, there are gendered aspects to consider. An economic model measures the influence that these factors have on firewood usage. We also tried to model the factors influencing alternatives to firewood, like cooking gas (LPG). 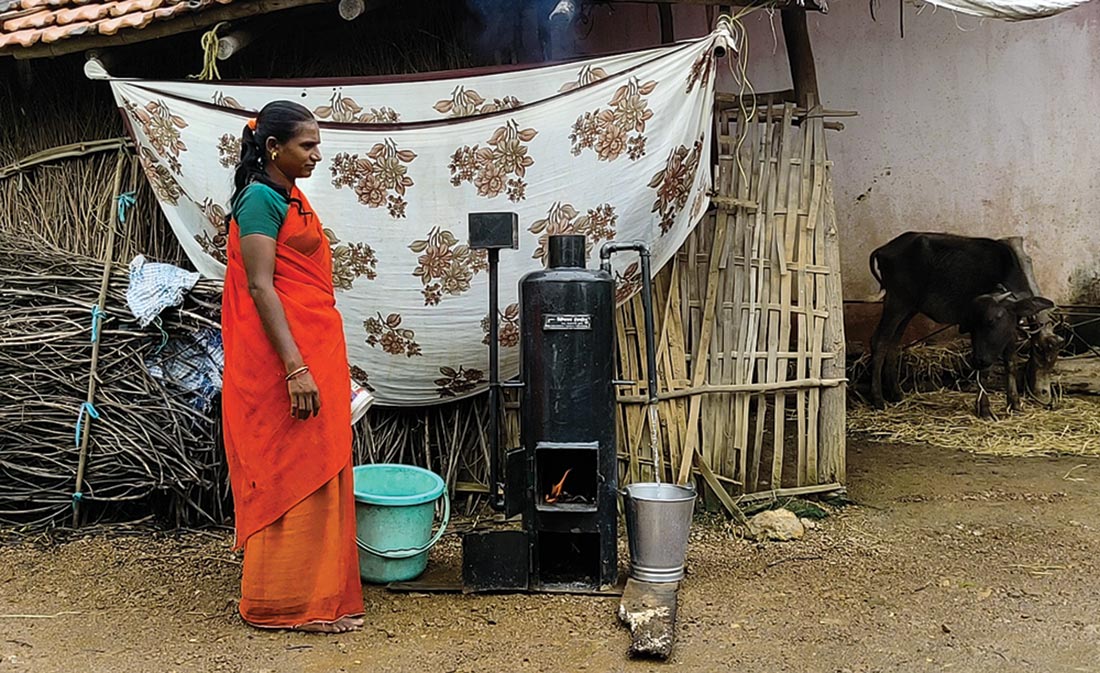 A woman uses the water heater and the fuel (crop residue) is seen in the background. Photo: Prathamesh Shirsat/WCT.

What did the research on the alternatives reveal?

Pooja Dewoolkar (PD): During the firewood study, we also tried to understand what drives the demand for LPG, as it was being offered at a subsidised rate as a firewood alternative. While it is cleaner and better for the environment and women’s health, it is way more expensive than the virtually free firewood, (barring the energy and time cost of collecting it). As expected, income levels were the biggest deciding factor. However, there were more factors at play. For LPG, refilling costs include the cylinder and transportation. As it is expensive, LPG is rationed and used sparingly, mainly for cooking, and never for water heating.

If the communities are provided more profitable livelihoods, would they then be able to afford alternatives?

Therefore, addressing affordability concerns for cleaner fuels is only half the battle won. To bring about a behavioural change that guarantees a long-term switch, we need a more nuanced understanding of on-ground practices.

What were the critical insights from surveys of households?

Tamanna Ahmad (TA): Based on qualitative interviews and rapid ethnography, we observed that the chulha for water heating is lit at dawn and burns for hours till all household members are done bathing. This is one of the areas that our water heater manages to save fuel on; once the water is heated, it can easily provide for a family of four without burning fuel for everyone. Even in summer, hot water continued to be used for bathing. We also observed that on account of the strenuous nature of fuelwood collection, it was a precious resource and was not shared. Even in the same household, everyone had their individual pile. 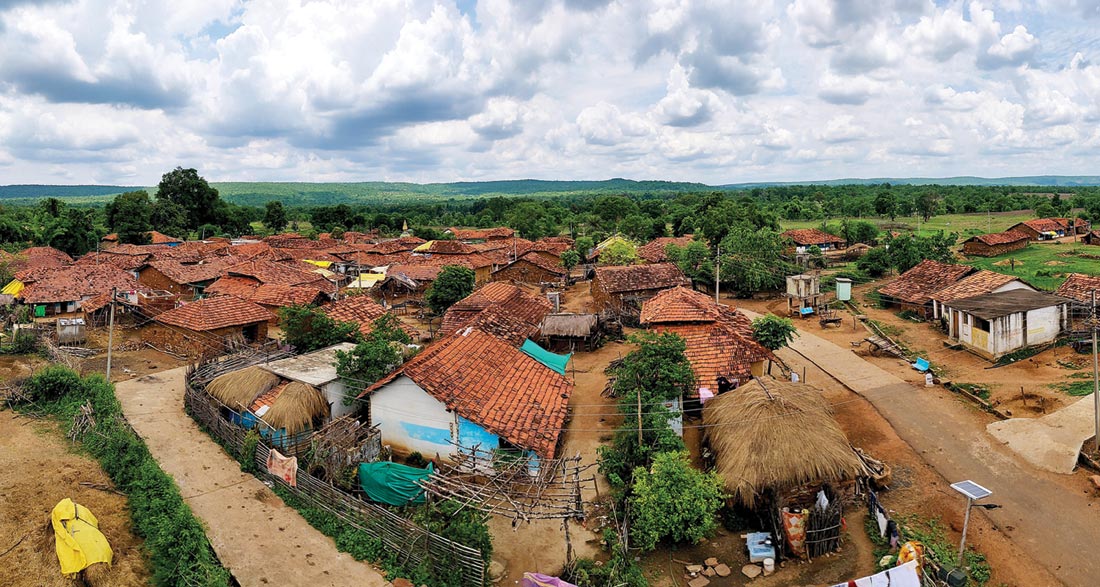 The project aims to influence a shift in behaviour. How did psychological inputs help in the research and in designing the intervention? What were the revelations?

Prachi Paranjpye (PP): Social psychological constructs like group behaviour, and the attitudes and perceptions of the communities towards their surroundings, help us understand the situation better.

If we make the desired behavioural change complicated, adoption takes longer. In the case of bumbb, its easy and efficient nature allowed for a smoother transition from the chulha. People initially did use some firewood in the bumbb, but now they largely use crop residue.

Although the aim of the intervention is to reduce firewood extraction, we did not try to convince communities about protecting the forest. We focused on encouraging them to adopt the water heating solution only if they felt it was beneficial to them at multiple levels.

Why choose an independent water heater and not a community-owned heater?

TA: We assessed the two models, individual and community-owned, based on various qualitative and quantitative studies. We also evaluated existing community-based initiatives such as the water ATMs, and observed the challenges in their adoption and maintenance. In terms of daily water usage, collection and heating practices, a community model had several limitations, such as the mode of carrying hot water back from the water booth, and the willingness of households located further from the unit to put in the effort of fetching it instead of simply lighting a chulha at home. The individual water heater simply replaces the existing chulha, and is much easier to operate, making it more favourable to adopt.

PP: Tamanna and I stayed in the village to observe the water usage of women there. We observed that given their busy schedule, there is an obvious preference for an independent chulha at home rather than standing in long queues to collect hot water. Considering all these factors, the independent bumbb was considered the best fit.

How did the team win the community’s confidence?

PP: The planning of the bumbb distribution was done in such a way that people got enough time to see the banners and posters and hear the promotional announcements, process what was being offered, and make an informed decision.

Kishor Bansod: We also conducted meetings with important people like the sarpanch and upsarpanch, and Self HelpGroups. Before the pandemic, we also went to schools for promotion.

After the demonstrations, we left one demo unit in the village for people to try. During distribution, we kept the demo unit next to the new unit, to assure people they were the same. We collected money only during the distribution. Mutual trust was sustained through absolute transparency. 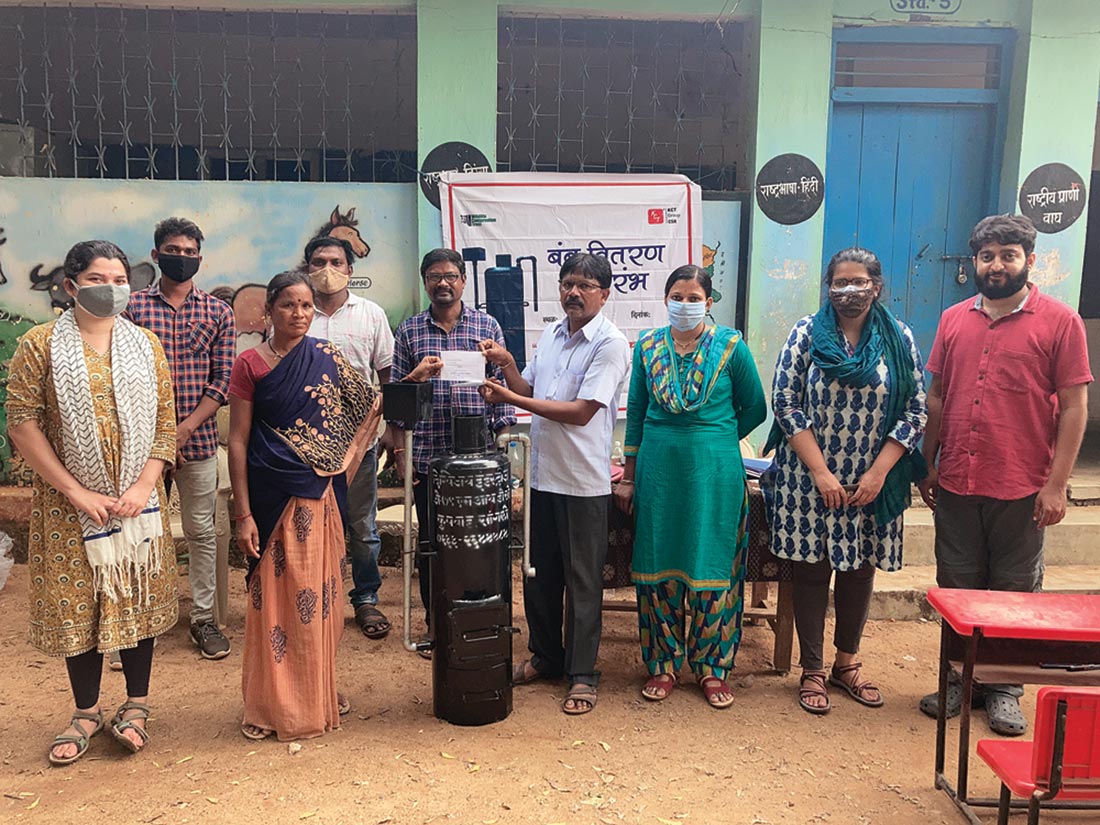 The thousandth beneficiary receives her water heater as the Conservation Behaviour team comes together for the distribution. Photo Courtesy: WCT.

What were your monitoring and evaluation methods to assess the outcomes?

PD: To be able to isolate the effect that the heater had on water heating, we used an evaluation technique called the difference-in-differences method. We collected data of all the households from villages where the intervention was rolled out (‘treatment’ villages), as well as from one village where it hadn’t been rolled out yet (‘control’ village). The data revealed that the usage of cow dung cakes (locally called ‘govrya’) had nearly doubled. While these cakes were used as fuel earlier as well, their usage in the bumbb results in the water being hot for a longer time due to the slow-burning nature of the fuel. Additionally, the frequency of visits to the forest to collect firewood had also reduced.

What are the next plans?

AB: The idea is to scale this intervention up to achieve a win-win for communities and forested ecosystems. Our ultimate aim is to ensure that no woman faces the drudgery and dangers of collecting firewood from the forest, and that the aspirations of forest-dwelling communities are met in a way that improves their environment. We are also catalysing the spread of this intervention through other NGOs such as Junglescapes, who have distributed over 1,500 units in several villages around, and Anti-Poaching Camps within, the Bandipur Tiger Reserve.