A traumatic incident of a black bear being burned alive set a determined Kashmiri woman, Aaliya Mir, on a life-changing journey. She always loved academics and pursued a graduate degree in Science, another in Education and a postgraduate degree in Mathematics. Not satisfied, she obtained a diploma in Disaster Management with a specialisation in animal health and shares her passion and concern for wildlife.

Education has the power to change the world, and there is nothing I believe in more strongly. My journey started as an educator, imparting and emphasising the tenets of knowledge and how it can actually help us manage our wildlife better. But I never once imagined that I would one day work in wildlife rescue and conservation.

I grew up in Srinagar, Kashmir, nestled amongst stunning mountains and a breathtaking valley. This has always been home to me. We have had our fair share of problems, but Kashmir’s strength lies in the ability of its people to bounce back time and again. The process is not always easy, but the results are always fruitful. What caught my attention was the steady rise of human-wildlife conflict in Jammu and Kashmir (J&K) and the growing intolerance towards wild animals.

I can recall incidents of human-animal conflict that were so barbaric that they still send a shiver down my spine. Especially a particular incident that changed my life, forever. I was in Delhi in the winter of 2006 when I heard about a shocking incident in the Tral region in Kashmir. A female Himalayan black bear had unknowingly ventured into human habitation, and was clearly just as confused as the residents. People gathered around the bear and chased the defenseless animal with sticks, spears and axes, and pelted it with stones, even as it climbed a tree to save itself from the ambush. Then ultimately, the villagers set the bear on fire and dragged her through the streets. Visuals of the incident were shown over national media. I was furious, hurt and helpless. Determined to make a change, I joined Wildlife SOS, an animal rescue organisation. 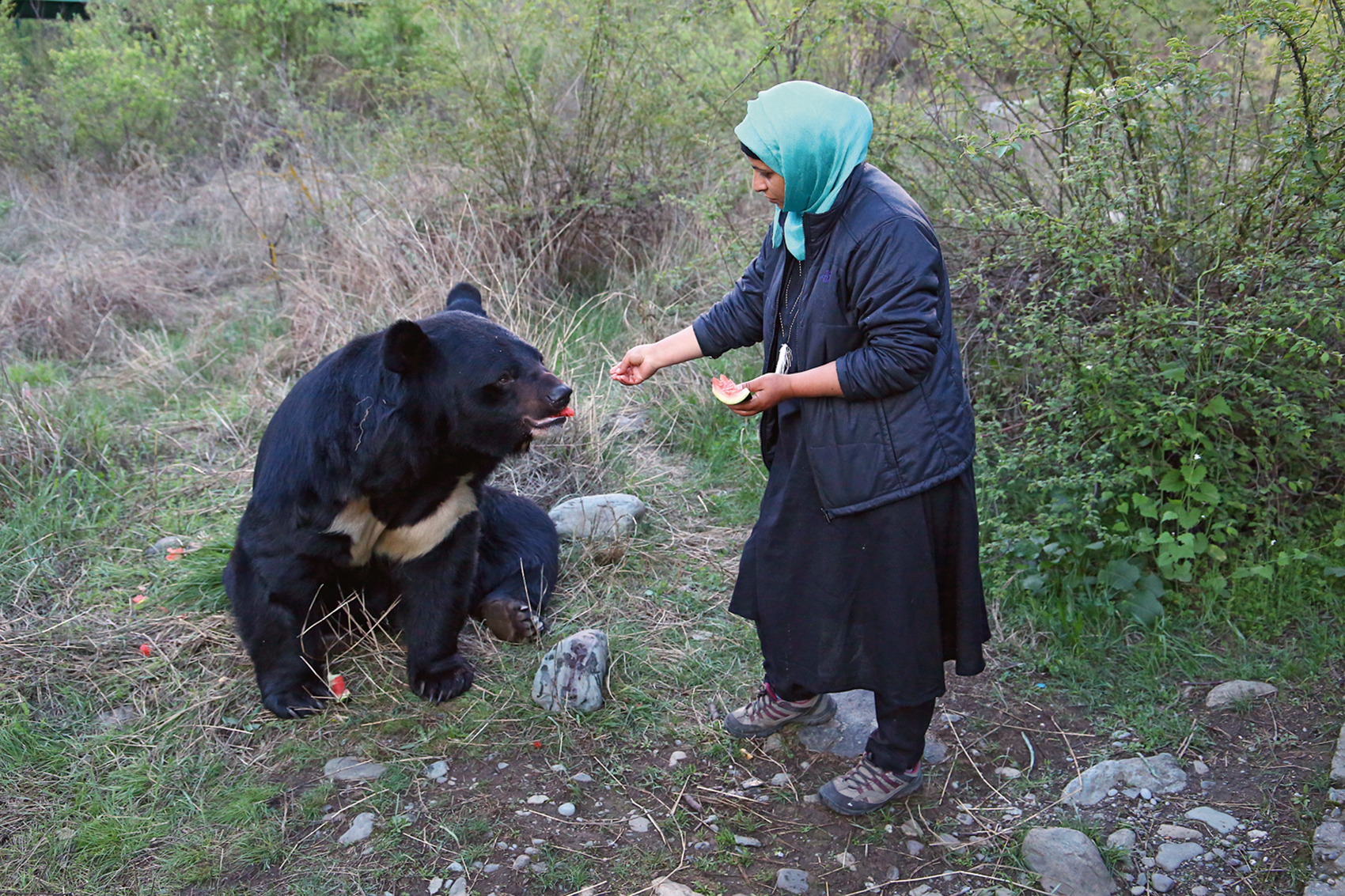 My Tryst with WSOS

In 2002, I started out as a volunteer in Delhi, and joined them full-time in Kashmir in 2007. I currently head their conservation programme in J&K as the Project Manager and Education Officer. From the very start, rescue operations became part of my life and work, especially where situations involved bears and reptiles.

J&K is home to the Himalayan brown bear and Himalayan black bear – two of the largest bear species found in the Indian subcontinent. Unfortunately, both animals find themselves between a rock and a hard place because their natural homes are being degraded and human settlements are coming closer to where they once lived in relative solitude. Predictably, cases of conflict are mounting, not just with bears but with leopards, porcupines, snakes and more recently, wolves, wild pigs and more.

The solutions are self-evident and most would end up improving the lives of both humans and animals. Clearly habitat protection and regeneration is one critical first step. This would not only ease conflicts, but also help tackle the conjoined issues that require climate mitigation, flood control and droughts, which were once virtually unheard of in the Happy Valley.

Only healthy ecosystems can ensure that wild species are able to access enough food and shelter, so that they are not forced to enter human habitation. Not coincidentally, working to restore ecological balance to J&K’s wilds would also boost downstream health, create jobs for women and men and encourage young Kashmiris to become the guardians of their own natural heritage. Such welcome change would inspire local communities to become the stalwarts of conservation and promote co-existence between humans and wildlife, to the advantage of both.

In addition to wildlife rescues, Aaliya actively works with the community to engage with the wilderness, including conducting birding tours in the Dachigam National Park. Photo: Wildlife SOS.

The Onus Lies on Us

Humans have no option but to adapt to wild nature and this involves behaviour and attitude changes. For instance, a vital conservation measure required in and around wilderness habitats is the disposal of waste. When organic waste is dumped in the open, all manner of animals would automatically be drawn to the food source. And since bears have a sense of smell that is 2,000 times stronger than humans, this amounts to a virtual invitation for them to arrive at our doorsteps from miles away.

As an education officer, my job entails sitting with communities, often women and children, to ensure that every individual is fully aware of the impacts of careless waste disposal. This is not by any measure an easy task as it requires patience and hard work. But every conflict situation avoided makes the effort more than worthwhile and very rewarding, because most wildlife rescue crises arise because of errors in human conduct, not animal culpability.

As might be imagined, mine was never an easy job. The nature of the task on hand is tough for both men and women, but for women there are additional liabilities. When in the field, I have often been belittled by people who did not believe that I was up to the job. While I focused on the rescue, I had to ignore the stage whispers that predicted failure of the task at hand. I never took this personally and as time went by, and communities living in known conflict areas began to see me handle animals effectively, they began to respect me and my work. Today, my team is rapidly gaining recognition by both locals and the enforcement agencies, without whose trust and support no real rescue work is possible.

This is why I believe from my core that changing local community attitudes is the most difficult and most rewarding aspect of my work, because it ends up saving the animals I was born to protect. Equally, it demonstrates to the young people watching the process, that they too can be part of the solutions. And that is a very key objective of my life’s purpose. At this point, I do not even want to mention the difficulties in coping with Kashmir’s often-hostile weather, difficult terrain… and our often-fragile political situation. 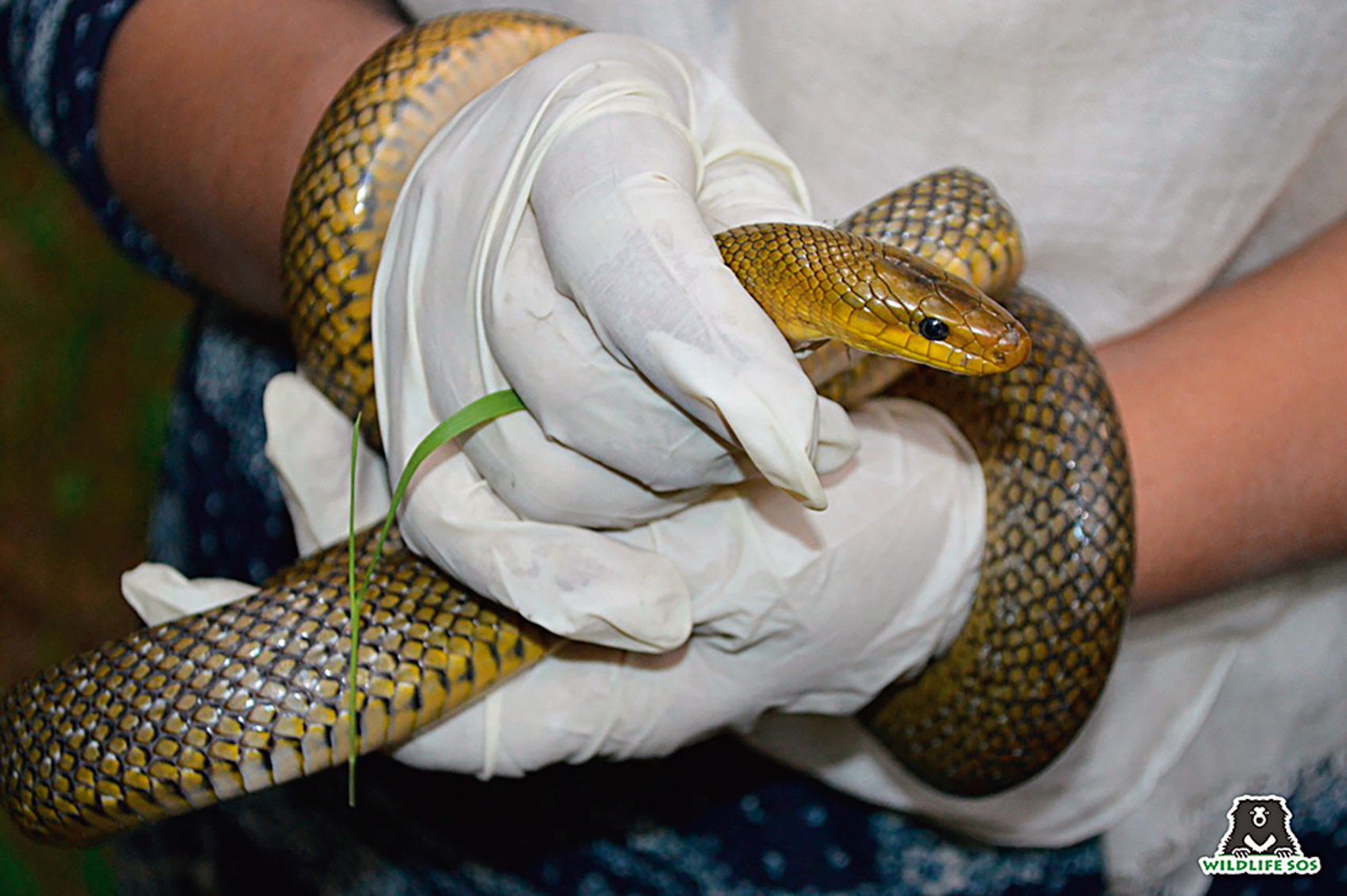 A significant number of rescue calls Aaliya receives are related to snakes. Here, she is seen retrieving a Himalayan trinket snake Orthriophis hodgsonii from the rafters of the Lalit Palace Hotel, Srinagar. Photo: Wildlife SOS.

I love everything about my job. But I must confess a successful rescue and the smiling faces of communities whose problems are solved, make me the happiest. As is the case across the subcontinent, a significant number of rescue calls involve snakes! I have loved snakes for as long as I can remember and my fascination for reptiles only deepened with every effective rescue. My first-ever snake rescue took place in 2014, when we received a call from a residence in Makhdhoom Sahib. An eastern cliff racer had taken refuge in a house and the residents had come across our newly established helpline number. Subsequently, we received a call from a lodge about a trinket snake and yet another about a Levantine viper from a home in Rajbagh. I discovered that few people had any clue about the nature of the creatures we were rescuing. So, informing and familiarising them with the wild creatures next to which they lived was tantamount to empowering them.

But there are no shortcuts. I remember rescuing two Himalayan black bear cubs from a large tree trunk, after their mother had been driven away by locals who had set the tree on fire. By the time we reached, we discovered she had been forced to leave behind two newborn cubs whose eyes had not yet opened. We made great effort to reunite the little ones with their mother, but to no avail. Eventually we hand-raised the orphaned cubs, who will never live in the wild again. On another occasion, a leopard was seen roaming on the street, in the heart of Bagh-E-Mehtab in densely populated Srinagar. We always work closely with the J&K Wildlife Protection Department and this time the operation took five full days for our 20-member team to capture and safely release the cat back into the wild. That we had to deal with heavy snowfall added to our problems at one level, but also helped us track the cat by following its pugmarks and scats. 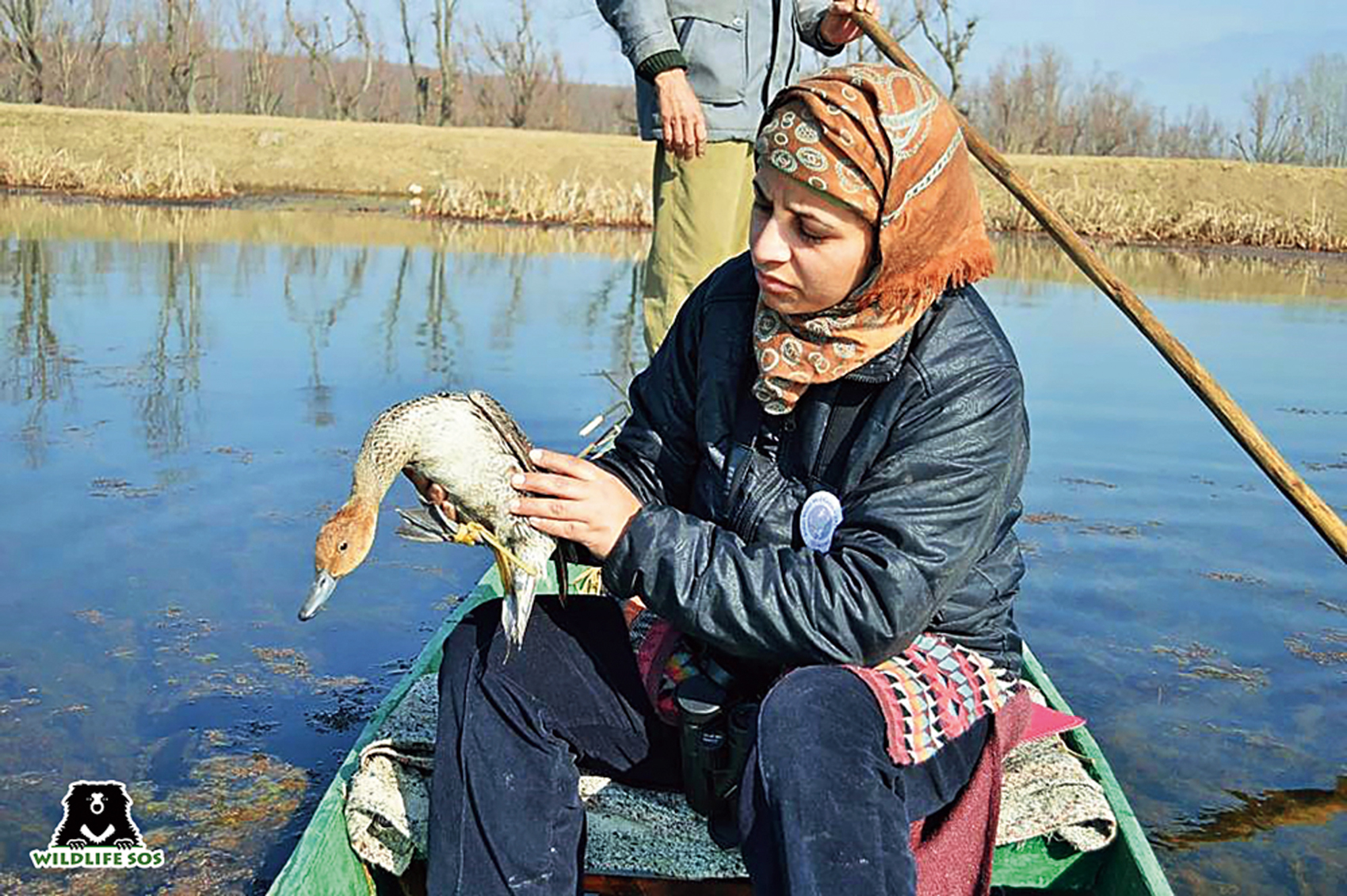 Aaliya participating in the Asian Waterbird Census 2021 at Wular lake, an annual citizen-science event held between January and March. This is an integral part of the International Waterbird Census (IWC). Photo: Wildlife SOS.

I consider myself lucky to be a part of the Wildlife SOS community outreach programme. I lead a team that works from the heart to win the confidence of communities. Our mission is to use awareness about wildlife to enhance the tolerance of people towards their wild heritage and thus reduce the frequency and intensity of human-wildlife conflict situations. Our team is ever-ready to respond to rescue calls involving large mammals like bears and leopards, and smaller ones like reptiles, raptors, turtles and even small birds. We also manage the rescue and rehabilitation facility in Dachigam and Pahalgam, where Himalayan black and brown bears are currently incarcerated.

We are single-minded in our purpose. Through workshops and community meetings we stress that humans must seek to learn more about wild animals and their natural behaviour and less to do with ‘training’ them to adapt to our ways. If we give them the space and isolation they need, more than half our job is done.

For me even a microbe has a purpose. Nothing is useless. Clearly, I have found my calling. 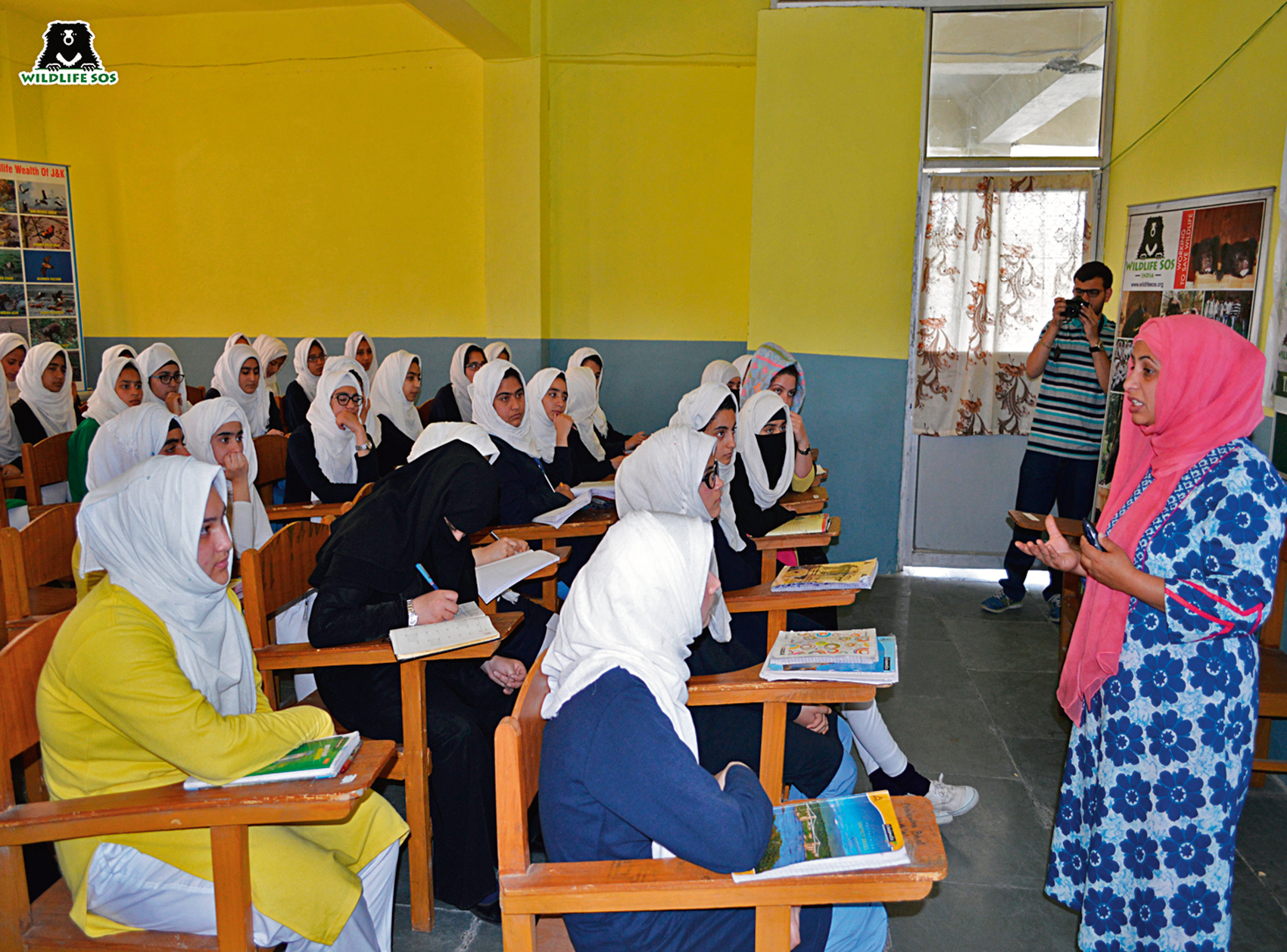 An educationist at heart, Aaliya believes that encouraging compassion and familiarity for wild species in their backyard will greatly empower and sensitise children, thus reducing current and future conflicts.Photo: Wildlife SOS.

Aaliya Mir heads the conservation programme for Wildlife SOS in Jammu and Kashmir. She is the Project Manager and Education Officer for the Dachigam and Pahalgam Bear Rescue Centres. She is also Wildlife SOS’ only female rescuer, and attends to distress calls for reptiles, birds and mammals caught in urban conflict. Aaliya firmly believes that education is the first step to mitigating conflict between humans and wildlife.