“LEAF strongly believes in the participatory representation of all stakeholders, including the vulnerable minorities in the fight towards climate justice.” – Living Earth Foundation’s (LEAF) mission statement.

In 2020, Sreeja Chakraborty, a young lawyer, ventured into her independent legal practice as an environmental lawyer with just two legal briefs to her name. Shortly after, India went into a nationwide lockdown to contain COVID-19. Between March and June 2020, an array of development projects, through the Protected Areas of Goa and Karnataka, were allowed through virtual meetings of various statutory authorities. In the meantime, a shrunken eco-sensitive zone (ESZ) of the Bannerghatta National Park, at Bengaluru’s periphery was announced. Around the same time, the Hubli-Ankola Railway project, involving the diversion of 596 ha. of prime Western Ghats forests in the Kali Tiger Reserve’s buffer zone was illegally approved by the State Board for Wildlife. Amidst these developments, Sreeja and her colleagues found themselves flooded with legal briefs.

Sreeja began representing several civil society groups, individuals, environmental activists, affected communities and retired bureaucrats before various courts, the National Green Tribunal (NGT) and quasi-judicial bodies. Besides being a practising advocate in the NGT, Karnataka High Court and Bombay High Court bench at Goa, she has volunteered and advised nationwide environmental people’s campaigns on environmental law centric advocacy. However, she was faced with the challenge of finding an “effective legal forum” willing to entertain environmental litigation during the pandemic. At the time, courts were only hearing the “most urgent” matters. Meanwhile, judges who were already dealing with an overwhelming number of cases, frowned upon people rushing to court without having the necessary documents or having done substantial groundwork.

As an independent lawyer, she realised that most of her clients wanted to go to court immediately. But often, these were issues not ready for litigation, either on account of not having the requisite documents, having incomplete investigations, or holding the potential of resolution through advocacy intervention and action, such as engaging with local panchayats and other decision-making bodies.

Sreeja recognised the need for an organisation to guide communities, citizens, activists, environmental defenders, and change-makers on ways to engage with the Government, local administrative bodies, policymakers, and the judiciary, in the space of environment research, advocacy, and monitoring. The same year, she met Rajani Rao and Sandhya Balasubramanian, who shared similar ideas, and had been volunteering with movements and organisations such as Extinction Rebellion/XR (Bengaluru chapter), Bengaluru Environment Trust (BET) and Growthwatch India. Both had quit corporate careers to pursue alternate paths. Shortly after they met, the three formally founded the Living Earth Foundation (LEAF) in Bengaluru. 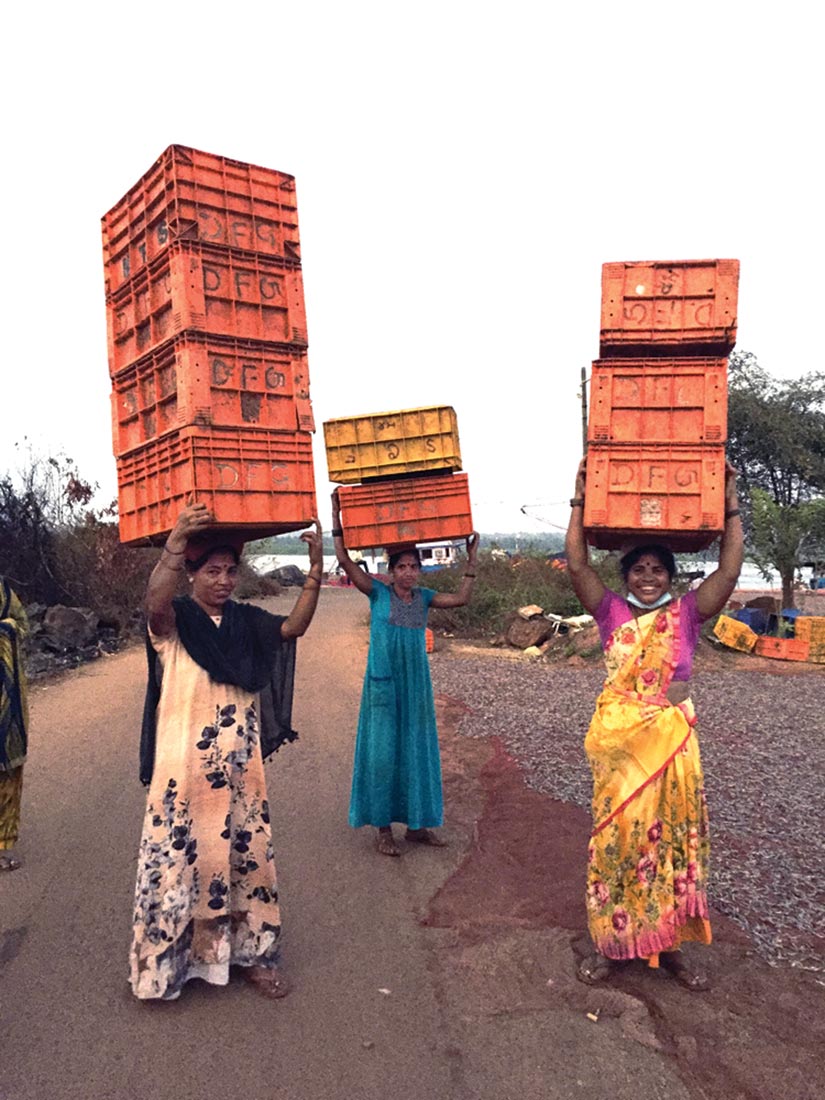 The women of Kasarkod Tonka heading back home with their dry fish as the sun sets. The construction of an access road for the port in Honnavar has led to loss of land used for dry fish processing and the women are now forced to walk long distances to process the fish. Photo: Courtesy LEAF.

Over the past two years, LEAF has provided legal representation in more than 20 environmental public interest cases and advocacy support to various environmental groups from Goa, Karnataka and Kerala. One of their first successes was stopping indiscriminate felling of 30,000 trees for a highway expansion through Karmal Ghat, Goa, an eco-sensitive area, in 2020 and getting the Public Works Department to conduct an alternate alignment study and cost benefit analysis. The same year, they secured a stay on the Hubli-Ankola railway line project, and also on the geo-technical investigation being carried out inside the Sharavathi Lion-tailed Macaque Wildlife Sanctuary during the macaque’s mating season, for an underground hydropower project in Karnataka.

LEAF’s core principle is that litigation should be the last resort. Research, monitoring and advocacy come first, in an interdisciplinary process involving inputs from scientists, policy researchers, activists, affected citizens and lawyers. They approach all cases by involving stakeholders, starting from the ground up. The support they provide ranges from filing RTIs, informing communities of their rights or simply providing a listening ear and advising on handling a particular situation. For example, an issue they have been working on since 2021 involved a community in a peri-urban area on Bengaluru’s outskirts. A large real estate company had encroached a dry lake bed, blocking as many as 15 rainwater feeder channels that carried excess rainwater from nearby areas to the lake. The lake was once the main irrigation source for agricultural villages in the vicinity. LEAF’s founders visited the site, and wrote a report and letters to the concerned authorities. They helped file a complaint, after which the Karnataka Tank Conservation Authority completed an inspection. The information from the RTIs they helped file has enabled the community build a strong case. This thorough pre-litigation work helped strengthen their position. “We have done all the groundwork to establish that there is indeed a violation. We followed up to understand the action taken once the violation was identified. We are now confident of taking things to the next level to ensure justice prevails and the community gets their commons back and yet another lake in the city doesn’t become a victim of rampant real estate development,” Sreeja says. Presently, the Minor Irrigation Department has been directed by the Karnataka Tank Conservation Authority to take action against the violations.

The founders also revealed how women are prime beneficiaries of their work. In January 2022, an intergenerational fishing community from Honnavar, Karnataka, comprising more than 2,000 women involved in fish drying as their only livelihood source, approached LEAF about a new port development and its allied infrastructure. Primary research and investigation by LEAF uncovered that the Government of Karnataka through its special purpose vehicle, M/s Honnavar Port Private Limited, was developing a barge/vessel loading facility to handle 4.5 MTPA of coal and iron ore at the estuary of the Sharavathi river. The project also involves the laying of a four kilometre long, 25 m. wide dedicated road corridor through the sandy beaches of Kasarkod beach, encroaching upon the coastal commons used as fish drying areas, which is also a seasonal nesting ground of olive Ridley turtles. The road construction, started by force and intimidation, led to an overnight loss of access to coastal commons. The fisherwomen who were the worst affected launched a peaceful protest, holding a dharna in January 2022. Many of the 400-500 women who attended in shifts were subjected to illegal detention. “The company behind the port building project confused the authorities using the state machinery and misled people about everything from whether they had project clearances to the very existence of the land they were planning to build on,” says Rajani. 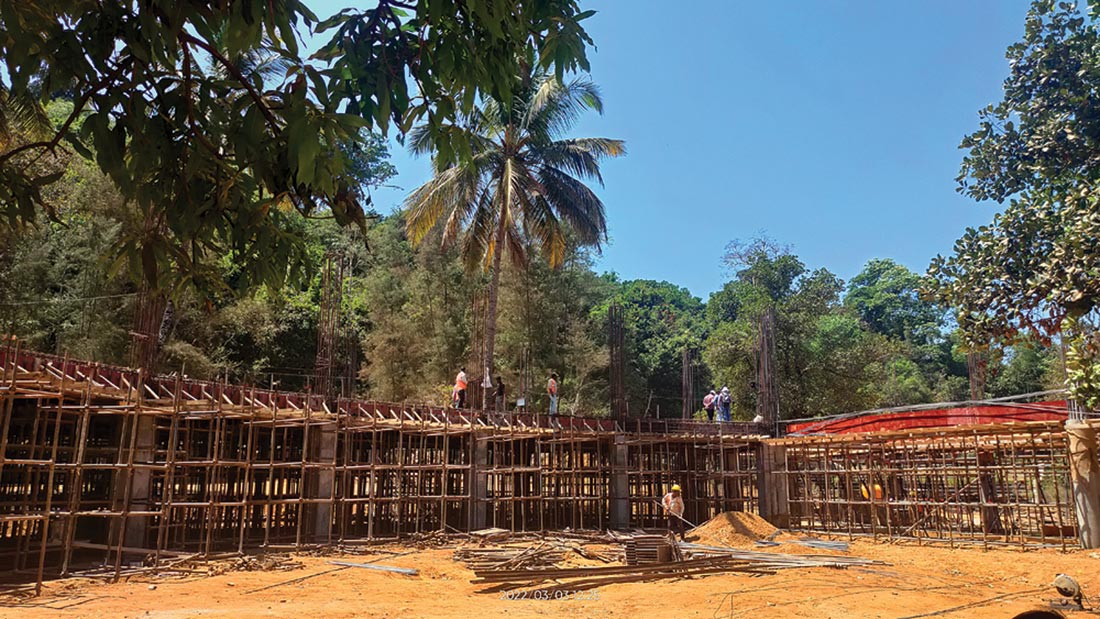 LEAF conducted video interviews of the affected fisherwomen to record the grave human rights violations, conducted investigations by foot to confirm turtle nesting sites along the alignment of the contested road, engaged with the local Forest Department, and also helped the community to file a complaint before the National Human Rights Commission. Currently, LEAF is engaged in supporting the community in their advocacy actions and campaign to protect their livelihood, health and environment.

According to Sreeja, LEAF’s advocacy favours transparency and helps communities access the technical knowledge to hold authorities accountable. She points out that authorities tend to curtail the voices of the people affected by large infrastructure or real estate projects, but are unable to do the same with LEAF, as they are an advocacy group. The organisation thus plays the crucial role of an intermediary channel between the community and the authorities.

LEAF’s approach of working with all stakeholders eradicates the need for litigation. “If all the government officers do their job well and hold project proponents accountable, the issue need not escalate into a conflict that has to be taken to court,” says Sreeja.

Ongoing construction of the Krishnadoddi Bypass of KRDCL Bengaluru Surrounding Road Project that is within the Bannerghatta National Park Eco-Sensitive Zone (ESZ). A PIL on this matter is currently with the Karnataka High Court. Photo: Courtesy LEAF.

Rajani elaborates: “In every case we take on, we can recognise the pressures of the climate crisis on the community. An old man living close to the Sharavathi estuary told me he has seen the river change its course over his lifetime, and that every year the sea wall is breaking. He asked why the government would rather spend money on large infrastructure projects than help his village survive.”

Climate justice may seem like an abstract concept but it narrows down to making lives easier in the face of the climate crisis. Through each case they take on, LEAF has the opportunity to understand and engage with what climate justice truly means for a semi-urban farmer, a city-dweller, an urban slum dweller, and others. The answer to each is as different as the realities of their respective lives, but the commonalities are: secure livelihoods, access to nutritious food and to a dignified life. They’ve seen how most vulnerable communities want only what is rightfully theirs, and don’t desire more than the land they can stand on, to feed themselves and their families. They are also often aware of the value of intergenerational equity – of handing over access to fresh air, clean water and productive land to their children. From LEAF’s experience, it is primarily in the policy and legal sphere that the implementation of the concept of intergenerational equity is lacking. 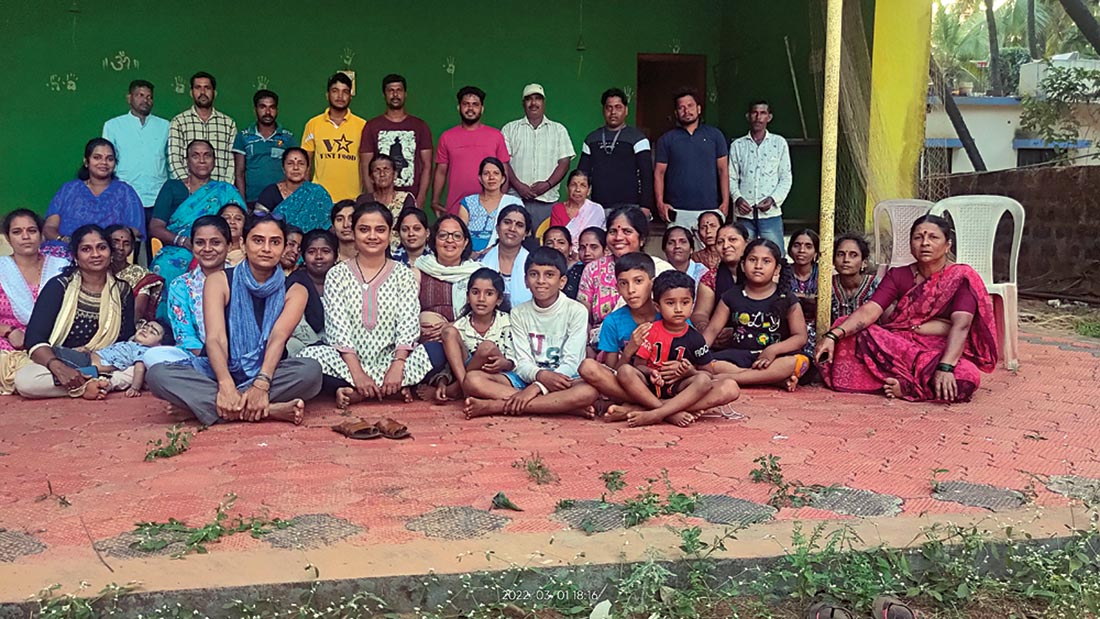 A large retail and entertainment complex under construction for tourists at Jog Falls within the Eco-Sensitive Zone (ESZ) of the Sharavathi Lion-tailed Macaque (LTM) Sanctuary. LTM is categorised ‘endangered’ in the IUCN Red List of Threatened Species. LEAF has filed multiple representations on the need for sustainable tourism within the ESZ. Photo: Courtesy LEAF.

Amidst alarming news from the climate reports released by the IPCC, what motivates Sreeja, Rajani and Sandhya to continue their work is the direct engagement with communities and the camaraderie they have built. For Sreeja, the support is mutual; giving vulnerable communities an opportunity to go to court with affordable legal fees is empowering to them as well as to her.

For Sandhya, the question is whether the work they do is sustainable, given the amount of grief and suffering they encounter. “It is not an easy path, and we do not want to romanticise anyone’s problems or the idea of saving someone. The work we do is motivated by the desire to be part of the solution, or at the very least, not part of the problem,” she says.

Through LEAF, the three women have also learned to lean on each other. Rejuvenating spaces and relationships with family and friends is an important part of their journey too. Rajani, Sandhya and Sreeja hope that there will be many more LEAFs in the future, and that more people – especially women – will come together and become enablers of community support, free access to knowledge, open conversations or simply provide a sympathetic listening ear. They say: “Through our work, we can starkly see that people are already suffering from the climate and ecological crisis. It is only our privilege that allows us to look away. Though there are perhaps more ‘lucrative careers’ out there, we don’t see ourselves doing anything but this. When we are welcomed into the homes of those who approach us for help – our hearts are full, but our stomachs churn as we have to do justice by them.”