There is a liquid magician who lives in a forest beneath the waves. She has eight arms, three hearts, no skeleton and a powerful beak...

Octopuses are camouflage experts and can not only take on the colours of their backgrounds but can mimic textures as well. They change colours thanks to special cells called chromatophores in their skin, which can be yellow, red or brown and which are attached to small muscles that can make them bigger or smaller. Muscles under their skin can make their skin smooth or bumpy to match their surroundings! Octopuses are great mimics – if they want to look like a rock they will pull their arms in and become ‘round’ shaped.

Invertebrates are animals without a backbone. Octopuses are the cleverest invertebrates on the planet. They are molluscs that have lost their shell in adaptation. Molluscs are animals that are soft-bodied with no segments (similar to snails). Most molluscs use or create shells to protect themselves. Octopus have come up with so many ways to defend themselves and hide and hunt that they no longer require a permanent shell for protection! They will use tools to create a temporary armour of various shells. 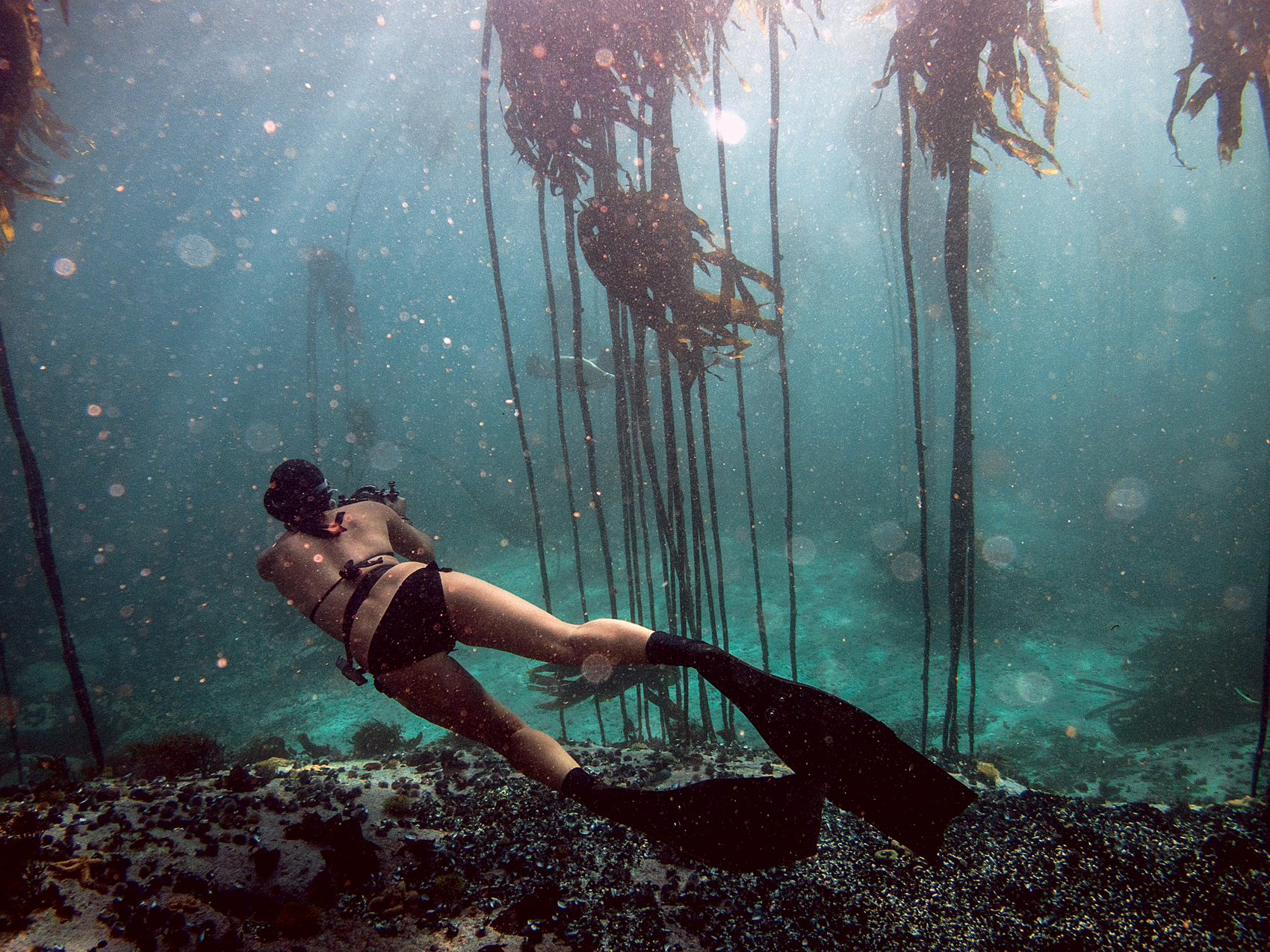 My husband Craig and I learned all of this by becoming friends with a wonderful octopus while making the film, ‘My Octopus Teacher’. The octopus in the film is fascinating in herself, but let me tell you more about her wonderful home and the other magical creatures who share it with her. This particular octopus lived in the Great African Seaforest, an underwater forest made up of floating algae called kelp, on the shores of South Africa. Think of a forest on land with all the animals and birds and then imagine it filled with water, that’s what the kelp forest is like! Except in this forest, fish ‘fly’ through. If you learn to dive in this undersea forest, you can fly like a bird! 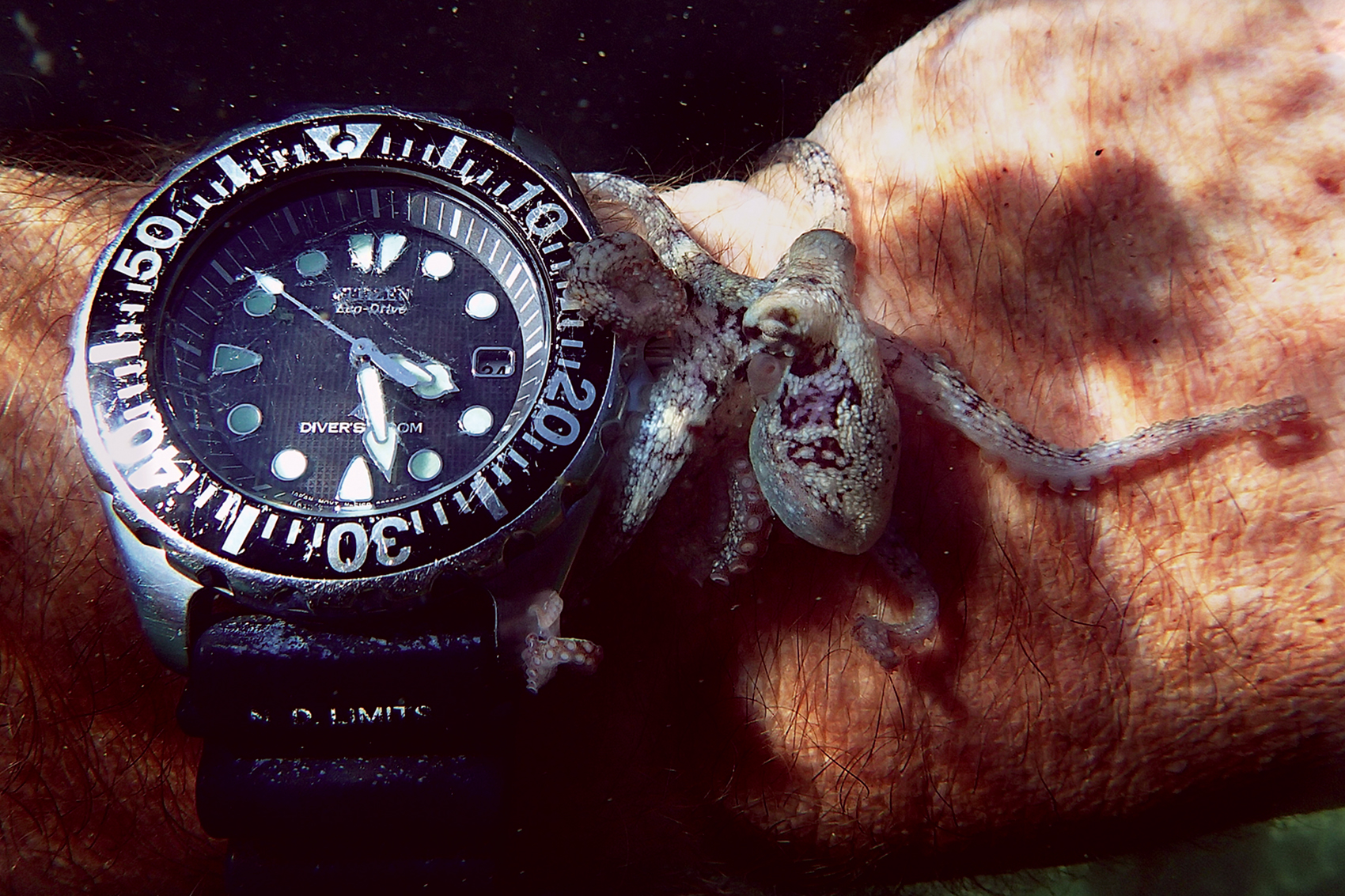 The Octopus Teacher as a baby. Photo: Craig Foster.

The sea forest is as productive as any tropical forest on land and is one of the most biodiverse places on the African continent. Hundreds of thousands of animals of different species find shelter, a feeding ground, and a nursery here. Many of the animals found here are found nowhere else in the world. The pajama shark or the striped catshark found here is a long-lived slow-maturing beautiful shark that grows to a little longer than a metre in length. True to its name, this shark has a striped body. It is a predator of the octopus. But remember, the octopus is so clever and so well-adapted precisely because it has learned to hide and defend itself from this shark! 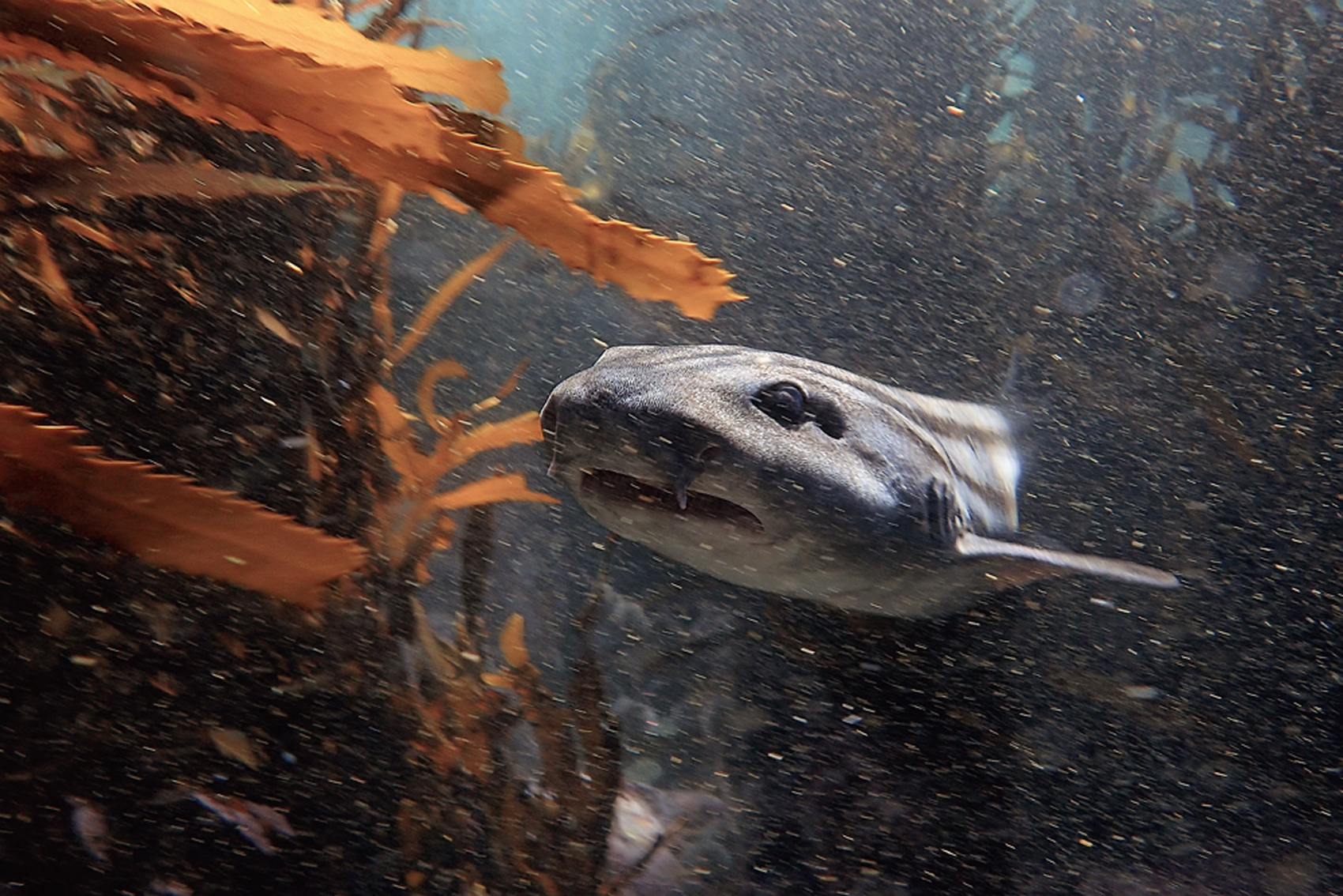 Another interesting animal found here is an air-breathing fish. When limpets are stuck on rocks, you and I could not take them off with our bare hands – we would need a strong knife to slip under the shell and we have to use a lot of strength to pull it off. Yet these fish, surf up with the wave, grab the limpet and twist it off like we would a bottle cap! To pull this off they have suction pads on their undersides that allow them to cling to rocks – hence their name, clingfish, aka rocksuckers. 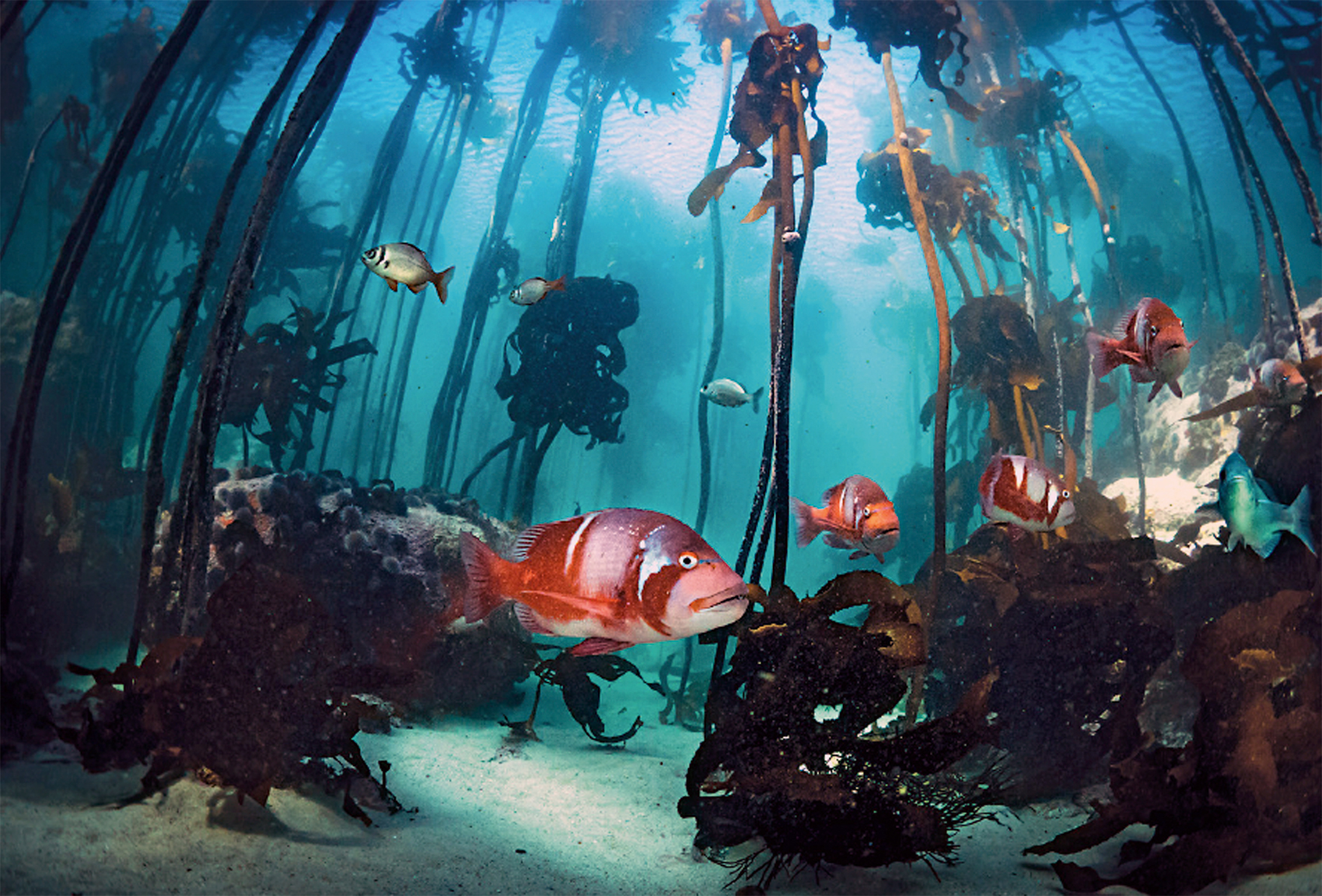 Big sharks, whales, giant stingrays, and seals also come here to feed and hide. This seaforest, like the ones on land, is fragile and can be destroyed very quickly by climate change. Poaching, excessive fishing, and pollution are the big threats. Kelp forests absorb carbon dioxide and are a key ecosystem to fight climate change. As they also harbour so much life they are very important to the continued thriving of biodiversity of the planet. Biodiversity is the immune system of the earth and just like your immune system is important to your health, biodiversity is key to the health of the planet. We all know now that when the planet gets sick, we get sick. 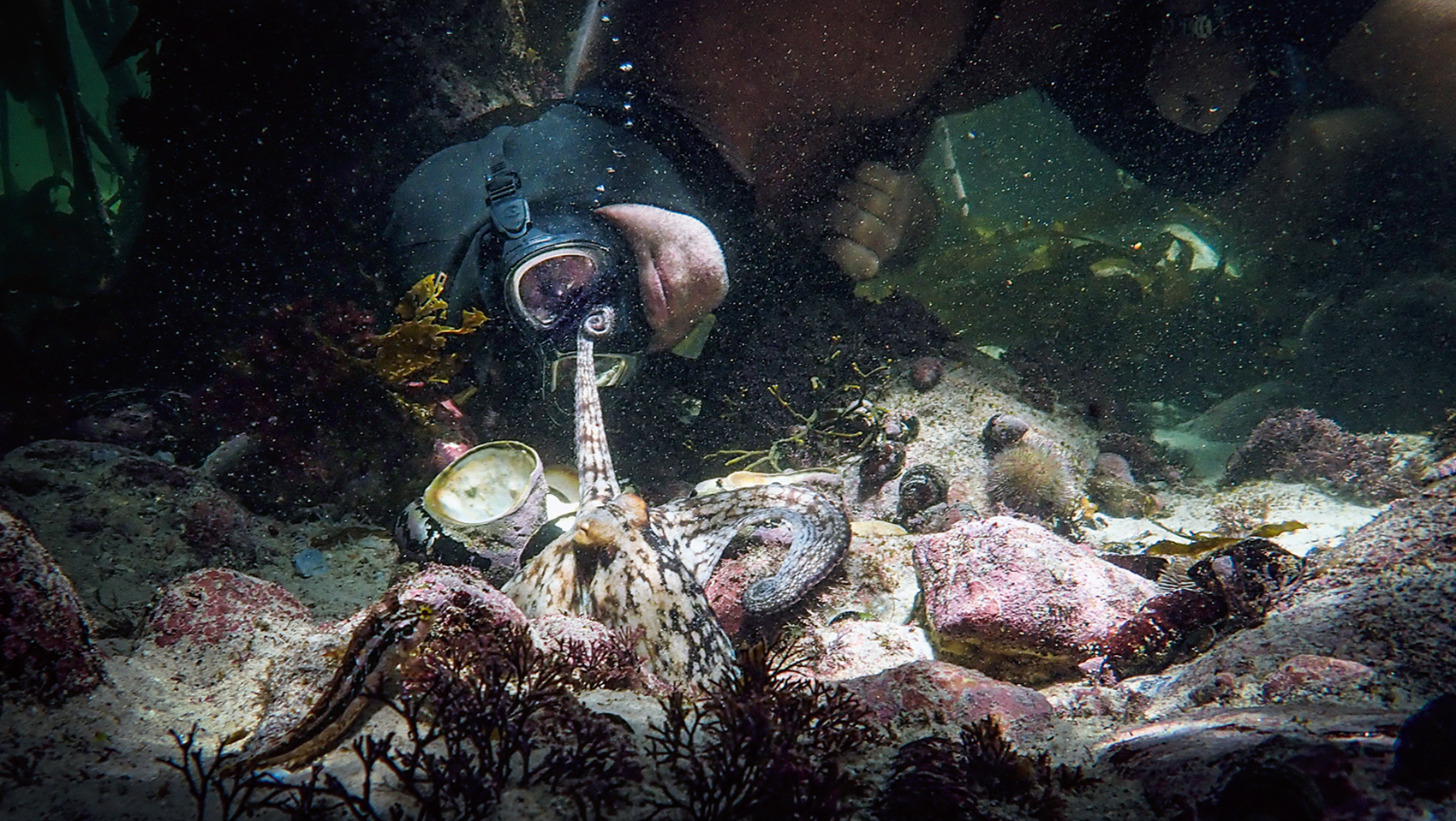 There is so much beauty in the world, much of it hidden from our eyes – but that doesn’t mean it doesn’t exist! All of it is quietly working towards maintaining the integrity of the biosphere without which life, as we know it, will not be possible. Remember you are wild. You are nature yourself and a long, long time ago, your first ancestor came from the ocean, went through hundreds of millions of years of evolution to become us, Homo sapiens. Every breath of air we take, every bit of food we eat and every bit of every drop of water we drink comes from the natural world. All of you who are seen as children today are going to be the custodians of this wonderful world tomorrow. Hold adults accountable and demand that when you grow up and visit kelp forests or go to wild places that you will see the same wonders as we do every day when we dive and explore.

Try this at home!
Try circling your right arm and at the same time moving your left arm up and down and you will realise how much concentration it takes! Now imagine you have eight arms that can all independently do their own thing – each octopus arm operates independently of the others!

(Pictured in the banner image, a common octopus the beautiful star of the Netflix film ‘My Octopus Teacher,’ which won the 93rd Academy Award in the Best Documentary Feature category! Photo: Craig Foster.)

Swati Thiyagarajan is an award-winning conservation journalist and author of Born Wild, named for the show she directed and presented on NDTV. She now works at The Sea Change Project in Cape Town, South Africa. Her film ‘The Animal Communicator’ is available on Amazon Prime (US). She is the associate producer of the Oscar-winning film ‘My Octopus Teacher’.