If you think it a complex, mammoth, or wildly idiotic task to bring a mountain down, you’re obviously behind the times. The stampeding bull of development spares nothing. Not even the Himalaya. The Himalaya of lush valleys, coniferous forests, escarpments and peaks, glistening cliffs, racing rivers and waterfalls, blazing glaciers and dewy highland meadows apparently does not amount to much. In fact, a plan for decimation takes no more than a disposable conscience, an adolescent’s capacity to persist with a lie, some machinery, and the backing of an ambitious nation state.

Take the 900 km. long Char Dham Pariyojana road widening project (CDP) in Uttarakhand. It has been dissected into 53 smaller projects, the sequence rearranged to conceal connectivity, and then presented to the court in a small unreadable font... all in order to evade the scrutiny of an Environmental Impact Assessment (EIA) as the rules of the Environmental Protection Act state that a project less than 100 km. does not require one. Without an EIA, one is free to fell trees, bulldoze forests, collapse slopes and choke waterways with impunity.

It has not been difficult to enamor the public with terms like ‘all weather road’, when one is careful not to clarify that by legal definition every tarred road is in fact an all-weather road; blazon the anticipated boost to tourism and local economy through these super wide Himalayan highways; fail to mention landslides and road blocks; stay silent about an intended toll tax on an otherwise traditionally free pilgrim route; and let loose bulldozers, excavators and JCBs, power saws and chains to massacre at will, while a hypnotised public waits patiently on the blocked road, in the swirling dust storm of progress.

The need for a double-lane paved shoulder design (DL-PS) blanket widening of roads, entailing a massive 24 m. ‘right of way’ to claw into the mountain and demolish slopes, was questioned right from the beginning. Over two years ago, a group of citizens petitioned the National Green Tribunal that a moderate widening of the existing roads, without significant slope tampering, was enough to facilitate smooth traffic flow. During these hearings, the Ministry of Road Transport and Highways (MoRTH) conveniently failed to disclose to the court a vital circular that it had issued in 2018. This circular declares that the design of DL-PS is unsuitable for hilly terrain in view of slope fragility and ‘felling of precious trees’, and recommends a highway of intermediate width. Instead, the MoRTH produced and vehemently stood by defunct guidelines based on an outdated circular from 2012 to defend its DL-PS design. The court prohibited fresh hill cutting while the case dragged on for another one and a half years in the Supreme Court.

There are worlds within worlds. Around and through the cement and steel world of man are the worlds of thousands of species. Wild and natural lives surround our laminated existence.  The Ganga that races at breakneck speed, may well be ours to dam and destroy, but in her translucent waters swim the Tibetan snow trout and mahseer. The ongoing criminal dumping of tons of cut mountain slopes straight into riverbeds, streams, and nullahs, choke these waterways and cut off oxygen supply to fish. This dumping also hinders their epic, strenuous upstream journey to breed. In fact, mahseer of the upper Ganga have been found to travel as far as Bhutan to spawn. In the riffles, sheltered from the current, underneath the gravel, thrive caddisflies, alderflies and stoneflies. Side pools are the magical dwellings of mayfly nymphs, dragonflies, damselflies and water striders, even though humankind excavates and churns these into puddles at will. The slopes that are being collapsed in a heap of rubble and muck were once the grazing ground of the shy goral antelope (see banner image) and Tibetan argali sheep. The irreplaceable riverine habitat of tall grasses, stony banks, sandy stretches and rocky caverns -- where one might spot large groups of Himalayan tahr on sunlit winter mornings, basking by the emerald waters of the slowly moving Bhagirathi, the playground of otters and weasels -- are now mostly unstable steep banks of loose mud and debris. The dense deodar and oak forests, so pitilessly razed, are the secluded habitat of the leopard, Himalayan bear, blue sheep, lynx, red fox and elusive Tibetan wolf. The granite ledges and steep cliffs, the plunging gorges, now demolished from base up, were the refuge and home of Egyptian and White-backed Vultures, snakes and lizards, porcupines, martens, and the vanishing musk deer.

It takes a special kind of destructive force to take all that is beautiful and life-giving, and reduce it to a useless ugliness. It takes a singular perversity to strip off precious topsoil, the soil that is formed over centuries, the soil on which forests grow, the soil that clings and prevents landslides, the soil that recharges our springs and aquifers, and wantonly dump it across valleys and streams as ‘muck’. Ironically, the CDP implementers are constantly plagued by this nagging problem of ‘muck’ disposal and inadequate ‘muck dump sites’. For with each vertical cut that is made – slicing the mountain as we would slice bread – to achieve the massive road width, the slope from the rear also collapses, bringing down with it hundreds of unmarked trees and excess unaccounted for muck. 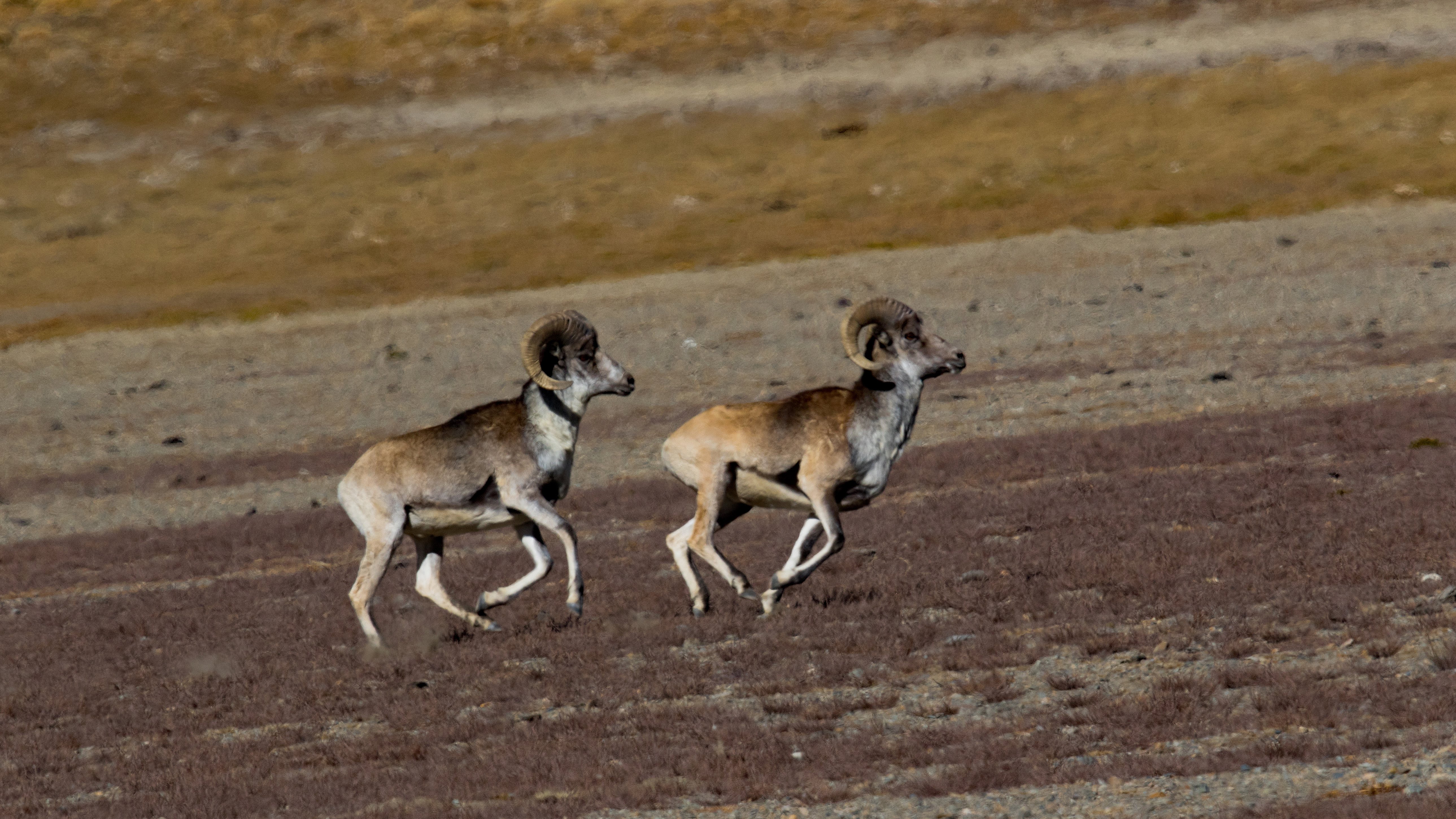 The slopes that are being collapsed in a heap of rubble and muck as a consequence of road constuction were once the grazing ground of species like the Tibetan argali sheep. Photo: Vikrant Kane.

In August 2019, realizing the horrific and unprecedented damage being inflicted on the Himalaya, the Supreme Court formulated a High Powered Committee, to ‘bring the project into conformity with the steep Himalayan terrain’ and ‘conserve and protect the sensitive Himalayan valleys ’. It was a hard won victory for the petitioners.  Yet by this time, 45 per cent of hill cutting and almost all the tree felling, running into lakhs, had been completed. Fresh hill cutting had been pursued undaunted, regardless of the court order. All these works were carried out to the specifications of the defunct and amended DL-PS design. The damage inflicted was irreparable, unscientific, and worse – unnecessary.  Even at this point, the MoRTH continued to conceal the latest, valid circular of 2018 from the Supreme Court.

The Char Dham route traverses picturesque landscapes; winding through hills and valleys, pristine habitat and wildlife territory.  Wildlife movement across the road is therefore a vital criterion of usage. Astoundingly, this expensive road that is built for speed and passes through wildernesses rich in flora and fauna, fails to incorporate any animal crossings at all!  It even fails to provide for a walking path for cattle, shepherds, local women, children, and even pilgrims! It is this brutal approach that led the High Powered Committee (HPC) to caustically comment in its final report that the “CDP has been undertaken almost solely as an engineering exercise with little concern for the loss of green cover or impacts on social life".

The authorities consistently went out of their way to declare the CDP as a disconnected project, with minimal and disconnected impacts. The deplorable attempt to undermine the sensitivity of the terrain and ecology is nothing short of self-destructive. This project is not only linear. An aerial view reveals that it largely winds itself in a small radius of just 50 km., set in contiguous Himalayan valleys, and therefore has tremendous cumulative impacts. Whether we like it or not, a hammer blow struck in the recesses of Gangotri valley will resound across an entire mountain range.

The route unfortunately lies close to and occasionally within the buffer zones of important Protected Areas such as the Gangotri National Park, Kedarnath Wildlife Sanctuary, Govind National Park and Rajaji National Park.  Pending notification, a 10 km. boundary deemed as the Eco Sensitive Zone (ESZ), requires special prior permission for road construction. The CDP, as reported by the HPC, has no less than nine projects falling in such zones. However, in the standard online application for forest clearance the proponents boldly filled in ‘NO’ in the column asking if any project falls in an ESZ or Protected Area.  This is just the most glaring in a long list of other violations discovered by the HPC, which went on to submit them to the Ministry of Environment Forest and Climate Change (MoEFCC) for appropriate action in August 2020.  A tactful silence would accurately sum up all the responses till date. The blatant fraud committed to dodge all existing laws, to escape all responsibility, to evade all accountability, is a betrayal of public trust and nothing short of an assault on our democracy. 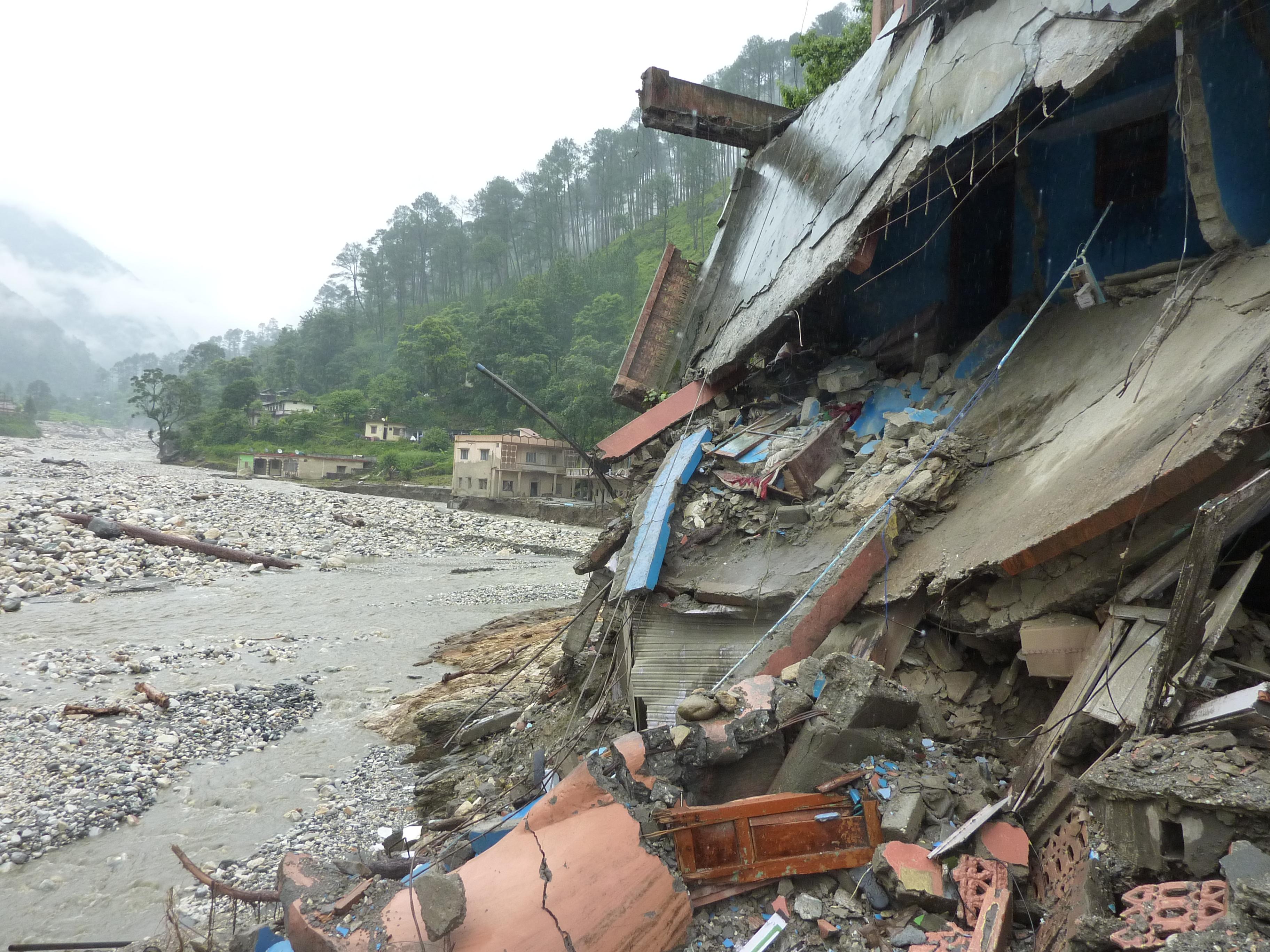 Uttarakhand's fragile mountainous region has seen a series of natural disasters over the last few decades, such as the flash floods in June 2013. Photo: Public Domain.

The Himalaya are an over-stressed, over-burdened ecology. A road tarred to an astounding 12 m. will burn through these already heating up mountains like an iron rod. Bumper to bumper dams across the Ganga, Alakananda, Mandakini and other glacial rivers have shriveled their roaring flow to ankle-deep streams. It took a people’s movement to stop three hydroprojects and save the last pristine stretch of the Ganga between Uttarkashi and Gaumukh. This 100 km. stretch is all we have left of the original wild- flowing 2,500 km. long river. Cement buildings, gala weddings in silent highland meadows, noisy tourists and constant pollution pound away at these hills with unrelenting pressure. Railways and floating hotels on artificial reservoirs, low flying helicopters, plastic waste blowing in the wind, dark tunnels, cement-sprayed collapsing slopes and mounds of dusty debris is what we are leaving for the coming generations.  Amidst all this chaos, snow leopards were recently sighted, multiple times, in the Gangotri valley.  It is the valley of origin of the Ganga, and a protected eco-zone. Even here, disregarding all guidelines, the MORTH plans to fell centuries-old deodar, oak and chir trees to build its monstrous DL-PS highway.

The battle that the High Powered Committee fought is tremendous, and the details of what transpired are appalling and a revelation in itself. The voices we raise, the silences we keep, the times we look away and the moments we take a stand are choices that we make.  The journey of humankind is not an isolated one.  We walk, we progress, we thrive, with every single bee and every little termite that ripens a field and creates a forest.  Either we learn this or we perish.

Priyadarshini Patel is Head member of Ganga Ahvaan, a citizen’s forum working towards conservation of the Ganga and the Himalaya. She initiated the movement to conserve the last pristine stretch of the Ganga - from Gangotri to Uttarkashi, which is now known as the Bhagirathi eco-sensitive zone. A resident of this ESZ, Priyadarshini is currently working towards sustainable development initiatives in the valley.