Assistant Professor Dr. Sumit Dookia of the Guru Gobind Singh Indraprastha University’s School of Environment Management, and Dr. Mamta Rawat, Director of the Ecology, Rural Development and Sustainability Foundation (The ERDS Foundation), are seasoned conservation practitioners. For the past five years, the husband-wife duo have partnered with rural communities in Jaisalmer, Rajasthan, to help keep the Great Indian Bustard from tipping into extinction. Today, they say that despite half a century of conservation campaigns and promises, the fate of the Great Indian Bustard remains as uncertain as ever. In an email interview, Dr. Dookia and Dr. Rawat explain to Cara Tejpal why the success of India’s much-lauded GIB captive breeding effort hinges on taking habitat protection measures off paper and implementing them on the ground with support from local communities.

To start with, can you share a snapshot of the GIB’s current population and range?
This is a tough question, and a bit of what wildlife biologists call a “numbers game”. To be frank, the situation is gloomy and pathetic. Through published literature, sighting records, and credible expert reports, I can say that the GIB has been lost from more than 95 per cent of its distribution range. The first population data for the species was collected in 1969, and revealed around 1,260 birds distributed across 11 states. The most recent population estimation, given by the Wildlife Institute of India in 2018, is just 150 birds. From this, 122 are estimated to inhabit western Rajasthan, with the rest scattered across Gujarat, Maharashtra, Karnataka and other former range states. The Jaisalmer region has the only breeding population of the species.

Here too, there are just two or three sites where GIBs breed, raise chicks and live natural lives. Gujarat has around five adult females but tragically, not a single male has been sighted here for nearly two years. 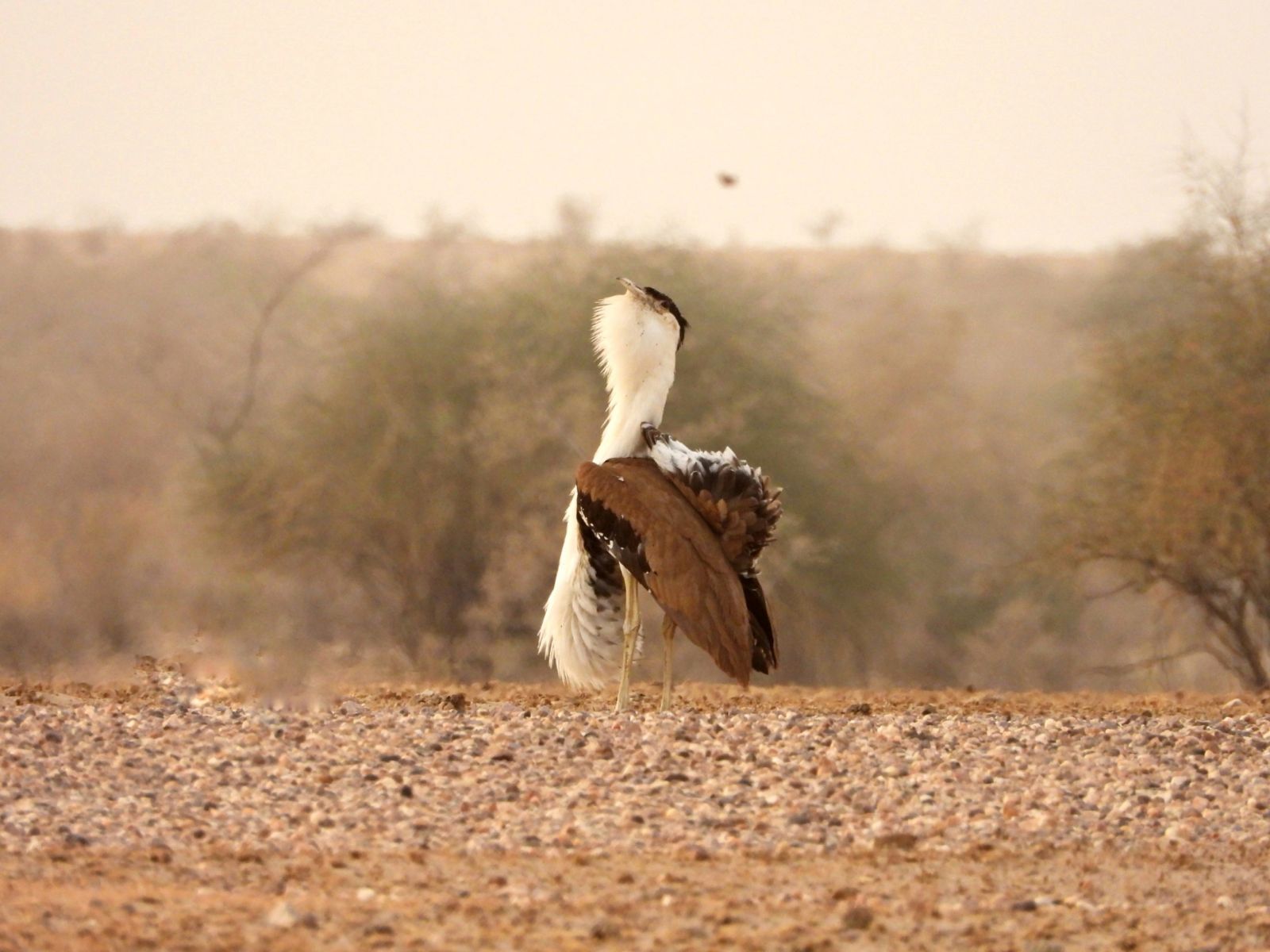 And what are the major threats to GIB survival?
The usual suspects, disturbance and predation by feral dogs, changing agricultural practices, and poaching, are all present. But the threat that outweighs all these is the one posed by overhead transmission lines.

This part of western Rajasthan has been identified as a major hub for wind and solar energy generation, and is excluded from the scrutiny of environment impact assessments before the commissioning of power stations. The problem arises when these stations are connected to the main power grid. The transmission lines cut across what is known as the GIB Arc – a swathe of habitat that starts at the northern end of Desert National Park, grazes Jaisalmer city, and ends close to the Jaisalmer-Jodhpur border. We believe that GIBs move in this area all year round, and are being killed at an unsustainable rate by collision with the power lines.

We have been working with local communities here for the past five years through our Godawan Community Conservation Project. This is an open network where conscious citizens monitor GIB movement outside the enclosures erected for them in Desert National Park, and share information with us. These volunteers have recorded four GIB deaths under these high voltage lines in Jaisalmer alone, and we have no doubt that a few more have died and been eaten by wild animals before they could be recorded.

In the present moment, these transmission lines are the biggest challenge to the survival of the species. 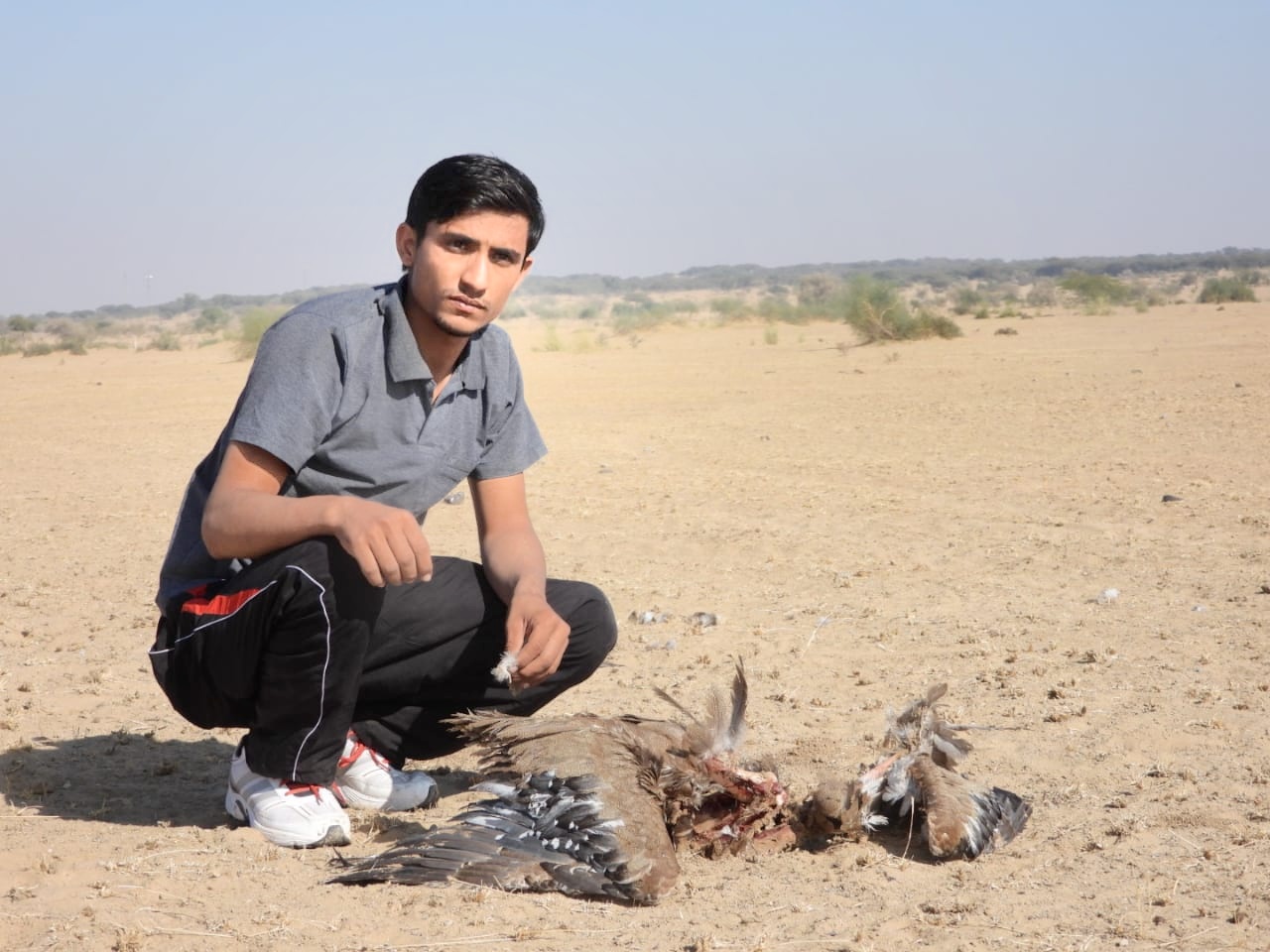 Have there been any major steps in policy or governance for the conservation of the GIB?
To understand GIB conservation issues we need to pay special attention to the decade between 2006 and 2016. This was when GIBs started to rapidly disappear across their range. It created panic amongst wildlife researchers, who in turn began to pressure the Rajasthan state, and Central Government to take cognisance. As a result, ‘Project Bustard’ was established in June 2013 by the Rajasthan State Government. This project largely focused on two things - securing the available habitat from agricultural encroachment in Desert National Park (DNP), a wildlife sanctuary, in Jaisalmer, and an annual week-long landscape-level survey of GIB population in western Rajasthan.

Later, in 2018, the Union Government initiated a project, titled ‘Habitat Improvement and Conservation Breeding of Great Indian Bustard -An Integrated Approach’ under the ‘Species Recovery Programme’.  This had financial support of Rs. 33.85 crore for five years from the ad-hoc Compensatory Afforestation Fund Management and Planning Authority (CAMPA) for conservation breeding. This was to be carried out with support from Wildlife Institute of India (WII) in collaboration with Rajasthan State Forest Department and International Fund for Houbara Conservation, Abu Dhabi (UAE).  A sophisticated captive breeding centre is under construction in the Sorsan Wildlife Sanctuary, Barran-Kota, though captive breeding efforts have already started.

The Forest Department is busy securing enclosures in DNP as breeding habitats. But these enclosures are too small for long term survival when one considers the year-round movement of GIBs, which spend around eight to nine months of the year outside these enclosures. This species uses a mix of habitats including agricultural fields and fallow land.

Many major decisions that can have a huge positive impact are yet to be implemented though they have been approved on paper. The best example being the long-promised undergrounding of the high voltage power transmission lines in GIB habitats. Even while old powerlines haven’t been placed underground, new power projects have been sanctioned towards the eastern side of the GIB Arc. This can only mean new overhead power lines.

As far as we are aware, the government in consultation with power companies, agreed to place power lines underground in critical locations where GIB movement is frequent. However, nothing has happened on the ground in the four years since.

"India has enough experience of failure over the last 70 years of GIB conservation. Lessons have to be learnt now if we want to give the species a fighting chance. We see success in a conservation model that depends on community participation. When we talk of GIB conservation we must also talk about tangible benefits to communities through this conservation."

Has there been any level of corporate cooperation to address this power line threat?
So far no corporate cooperation is visible at a ground level. Around 11 corporate houses operate solar or wind farms and other major businesses in western Rajasthan. But even the CSR work of these companies does not relate to GIB habitat conservation, despite GIBs being found dead under their power lines.

Please share more about the community outreach work that you are spearheading?
We changed course from a species centric conservation approach to a community conservation approach in 2015. Nature tourism based on birding is one of the key initiatives we’re pioneering for local youth. Around 10 have already started working and are earning well from this.

We conduct long surveys in the GIB Arc landscape at least twice a year. This is something we do independently of the government, and we use this opportunity to train our local volunteers in data collection. It also allows us to connect with more people and recruit those who are interested.

Our focus is now on collaborating with farmers to promote organic farming practices in GIB landscapes. We hope to market the resulting produce through a conservation lens. Dr. Rawat mobilised these community conservation ideas through the organisation we founded – ERDS Foundation. The idea behind working with farmers is to encourage GIB friendly practices and eliminate the use of pesticides and artificial fertilizers, whilst reviving the cultivation of local and traditional seed varieties.  We are also exploring the idea of starting small goat rearing and poultry units to recover any financial losses made to farmers during the transition to organic farming.

Overall, if adopted at the landscape level, such practices will economically support the local communities and create healthier habitat for GIBs. 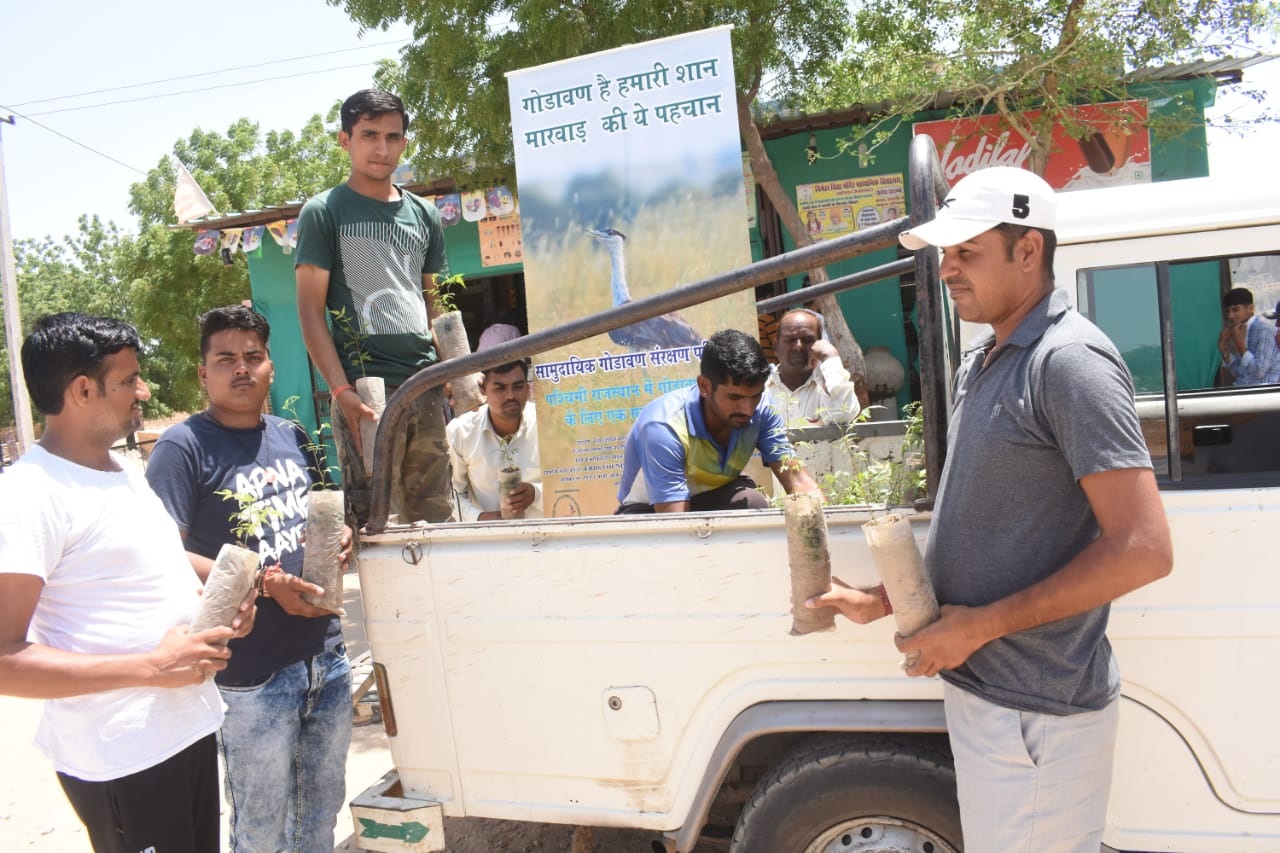 The GIB has been at the center of conservation debates since the 70s, but its luck has only dwindled. Why has the country failed to make any significant headway with GIB conservation?

Our experiences are from Western Rajasthan, so we will comment on this. I think we have failed to understand the sentiments of local communities and their role in GIB conservation. The approach taken was to remove human settlements from Desert National Park which naturally turned communities against the idea of conservation.

Currently Desert National Park is nothing, just a sanctuary on legal grounds that was proposed as a National Park in 1981. There are 70 odd villages in this 3,162 sq. km. area, and there is a big issue of land holding or ownership. The Forest Department holds barely 200 sq.km., the remainder is either with the Revenue Department or with locals as Khatedari land. These land issues created classic “people-park” conflict, and locals weren’t interested in even discussing GIB conservation because of the fear of being moved out of their homes in the Desert Wildlife Sanctuary (proposed National Park).

Over the past five decades, we have lost GIBs from 90 per cent of DNP. Their population is now restricted to the northernmost part of the park, between Sam-Sudasari enclosures where the Forest Department legally holds a large part of the land. As a result, the current young generation in many areas of Jaisalmer have never seen a GIB in the wild. They’re disconnected from the species. There has been no long-term project that has sustained in the area. Now is the time to look back to learn from our mistakes to decide how to move forward.

The GIB and its habitat can only be saved if we allow local communities to understand that this is their bird, their pride and its future is in their hands. This is our mantra at work, and we understand that there will be a period of venting as they release their frustrations, before we can work together. From the last five years of community work, we know that a better future is possible. Our network of community volunteers is growing by the day, and each person has a commitment to conserving the GIB. We are full of hope that joint efforts of all stakeholders (scientific community, park authorities, and other directly or indirectly involved agencies) will steer the GIB to a bright future. 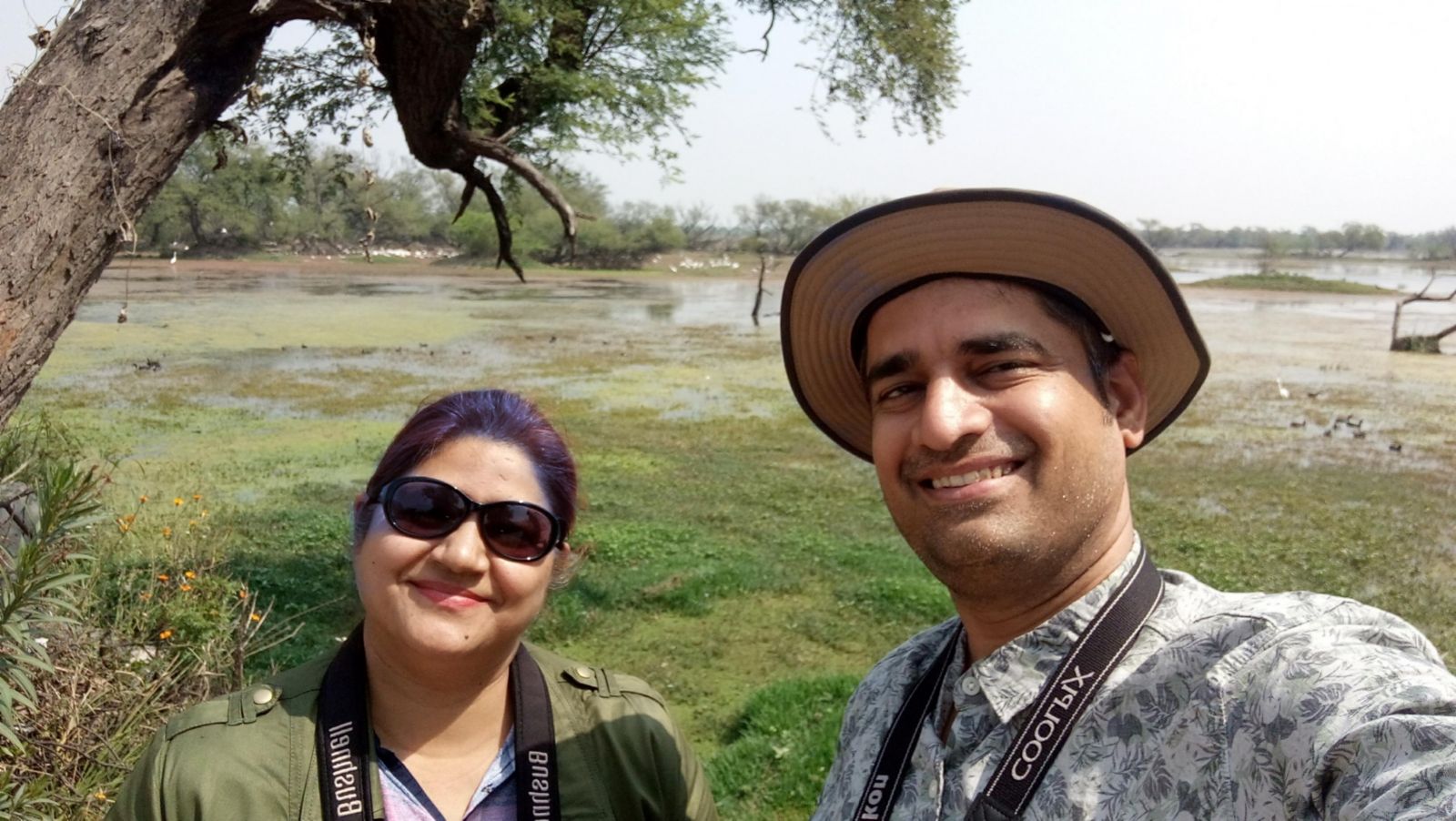 Dr. Sumit Dookia saw his first GIB in 2001 when he joined veteran ornithologist Dr. Asad Rahmani in Bikaner as a volunteer on surveys of the GIB and McQueen’s Bustards. At that time, Dookia was a young doctoral student, but more importantly, a native of western Rajasthan, which made him valuable to local outreach efforts. It led to a passion for working with communities that endures so many decades on. Dr. Mamta Rawat on her part, married the man and adopted his cause. Once, a public health worker, she has worked on issues of community health and water in western Rajasthan for the majority of her career. Today, Rawat has a vision to develop sustainable livelihood generation opportunities for local women in GIB landscapes. Recently she received a grant from the Oriental Bird Club for community-based GIB monitoring and ownership development.

MORE ON THE GREAT INDIAN BUSTARD

Could captive breeding bring the Great Indian Bustard back from the brink of extinction? Arjun Awasthi  speculates solutions. Read More