Shared Moments With A Hornbill

There are few places on Earth I would rather wake up in than the Western Ghats. In the moments before dawn, when the sun is seemingly awake but too sleepy to open its eyes, a deep blue stillness covers the forests. Creatures of the night have withdrawn and those of the day are yet to emerge. In the dimly lit, gentle chill of the morning, shapes of trees and hills emerge faintly. As they become clearer, melancholy cuts through the forest in the form of a whistle. Other winged wonders promptly join the haunting song of the Malabar Whistling Thrush, and a dawn chorus crescendos through the forest. In Devala valley, where this orchestra woke me each morning, one performer stood out from the rest. His wings beat percussively with purpose as he flew across the valley. His call rumbled through the valley, prompting binoculars to be trained towards his usual flight route. Each morning, we would watch as a male Great Hornbill flew over our heads to a patch of fig trees, and fetch fruit for his partner and offspring.

Great Hornbills are dutiful parents. During nesting season, the female looks for trees that tower over the canopies. At these dizzying heights, she finds a cavity generously sized enough to accommodate her large body – the Great Hornbill can grow as tall as a human child. Once inside, she secures the nest by sealing the entrance and leaving only a small opening for food to be delivered in and waste to be pushed out (not unlike many of us during the COVID-19 pandemic). The male is tasked with bringing food at regular intervals. He flies through the forest, collecting everything from figs to small animals to ensure his family has a well-balanced diet. While my understanding of the female’s role mostly came from reading, I experienced the male’s impeccable parenting habits first-hand. I use the word ‘experience’ because you don’t just see a Great Hornbill, you hear its reverberating calls, watch as the squirrels scatter for cover and feel your skin tingle as heavy wings carry this giant across the sky.

In January 2018, I had just moved to a small hamlet in the Nilgiris, arguably one of the most special places on Earth for its rich biodiversity. I was just beginning to get accustomed to the joys of waking up before sunrise amid an evergreen forest when it quickly became evident that I was not the only one with a regimental morning schedule. Around 6:30 a.m., exactly 15 minutes after my cup of coffee, a loud kok sound would come from the canopies. A Great Hornbill’s loud and clipped kok is sometimes accompanied by what can only be described as a chainsaw singing its favourite song at a karaoke bar. A male would make his way from across the valley, his call getting louder as he approached us. Beneath him, the canopy would ring loud with the alarm calls of Malabar giant squirrels, scarpering for cover to avoid being on the hornbill’s morning menu. But for his maiden flight for the day, the male would fly straight to the fig trees not too far from our bungalow.

After this early morning route, the male would make multiple trips through the day to our side of the valley. After foraging on our side of the stream, he would always make a pit stop on the edge of the stream before crossing over to his neck of the woods. Watching his routine for the next two months became a routine for my colleague Satheesan and me. After several months of intense speculation over what the hornbills may be up to, we decided to visit the roosting site. We simply hoped to catch a glimpse of the hornbill that had become such an integral part of our lives. 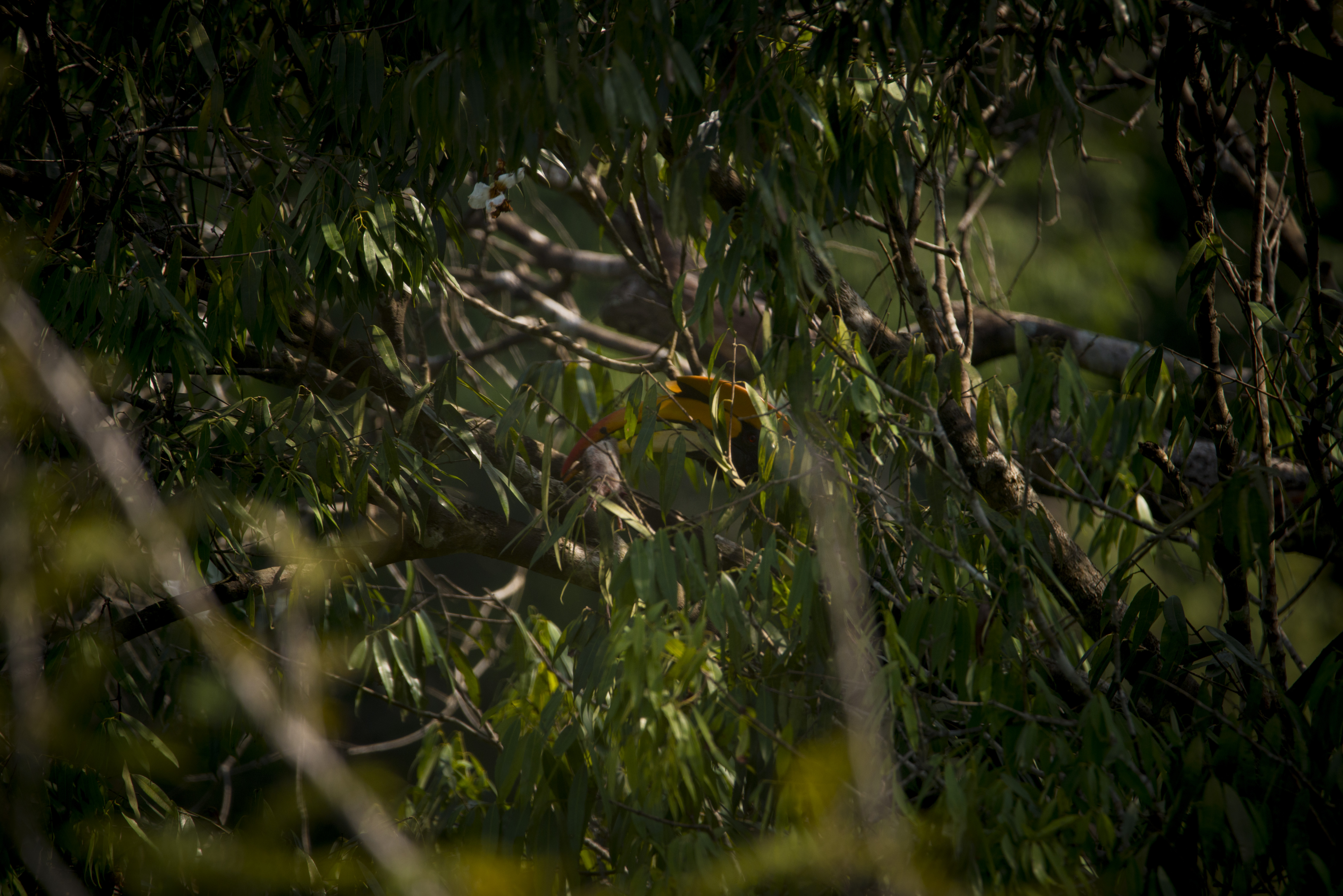 A fleeting glimpse of the Great Hornbill through the foliage. Photo:Samuel John.

In the heat of April, we began our ascent. The male had not visited the site for a few days now and we were not too confident about our chances. Nearly an hour passed as we crouched amidst tea bushes, moving strategically to catch the shade of silver oak trees that dotted our vicinity. It is my firm belief that our natural world has a penchant for dramatically-timed entrances. On the verge of giving up and leaving, two very special cues for the senses appeared – the loud beating of wings followed immediately by a knowing smile on Satheesan’s face. A male Great Hornbill landed on a fig tree close to us. Just as we sat there taking the moment in, a female hornbill landed beside him. After months of catching fleeting glimpses of each other, we were now in close quarters with our winged neighbour and his companion.

There are many joys to witnessing special moments like courtship, breeding and nesting. Even the foraging behaviour of hornbills can be incredibly fascinating and ecologically significant – the species disperses around 90 per cent of the seeds they consume away from the tree. This morning was grounded in an uncomplicated show of affection between a pair. We watched as they preened and fed each other, spending long, comfortable moments of silence. On more than one occasion, we watched the female pick figs from the tree and hop across to offer them to her companion. The male appeared to help the female reach itchy spots that were vexingly just out of her reach. The hornbills looked stunningly beautiful as they always do. But on this morning, they also looked a bit goofy, unrehearsed and relaxed. Perhaps they were comfortable with the idea of not doing much that moment. After nearly two hours, the couple gracefully took off to their side of the valley.

We decided not to visit the roosting site again in the hours that they were occupying it. We ran into them regularly in different parts of the estate for the remainder of April and even bumped into them sometimes on work routes that took us close to their roosting site.

Between all the great stories, films and studies of this enigmatic bird, lies simplicity. A bird that looks like it was designed in an extravagant world where headgear was always in fashion, quite simply going about its daily life. Finding comfort in perfectly uneventful moments of silence with another form of life (human or otherwise) adds priceless perspectives to any relationship. It is a moment that shaped both my view of nature and how I interact with it. 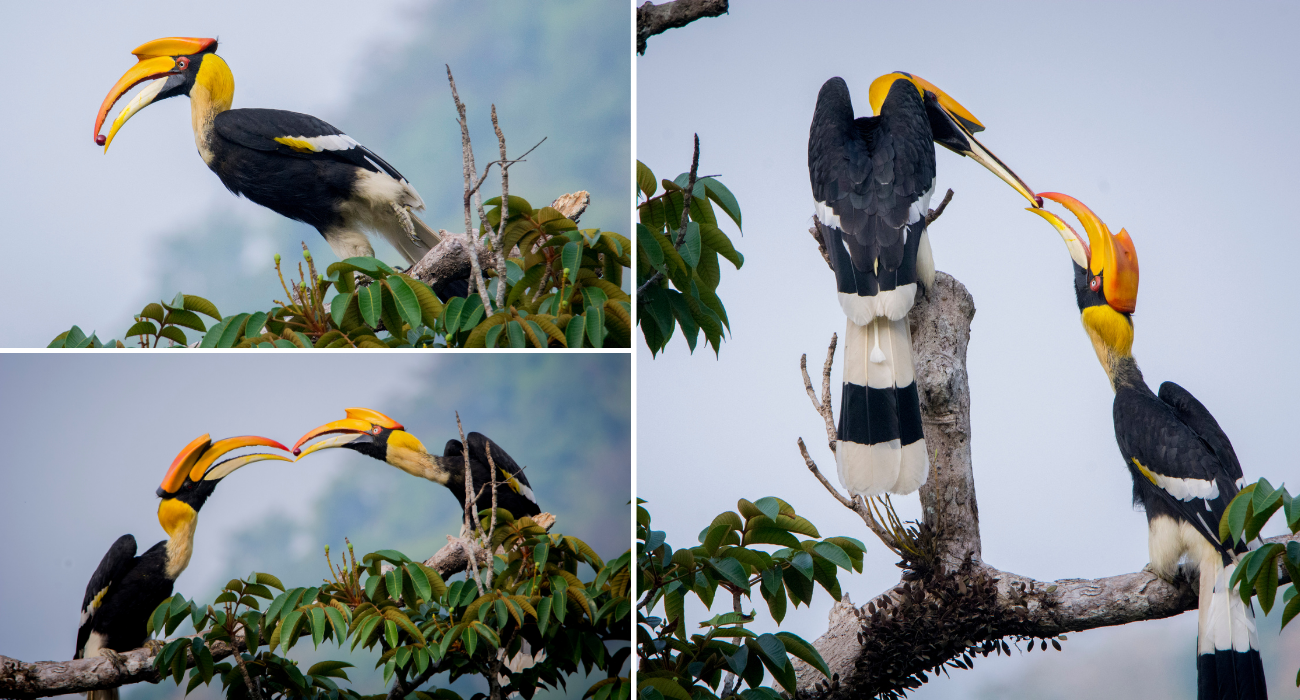 The author spent a memorable afternoon in the company of a Great Hornbill couple, as they preened and fed figs to each other, seemingly comfortable with long moments of silence. Photos: Samuel John.

The Western Ghats, where I had the privilege of spending time with hornbills, is one of the world’s hottest biodiversity hotspots. Older than the Himalayas, this mountain range painted in green is a cradle for a mind-boggling diversity of life. Unfortunately, the vast tapestry of life that calls the Western Ghats home, faces threats that have intensified rapidly over time, in the form of development agendas that most often benefits bureaucrats and large corporations more than it does the average citizen or wildlife. Proposed policies like the Environmental Impact Assessment, 2020 draft present unprecedented threats to the Western Ghats and other natural habitats across the country. While catastrophic policy decisions loom over India’s natural world, large scale projects approved by the Ministry of Environment, Forest and Climate Change (MoEFCC) wreak havoc within our current framework. In Goa, the doubling of an existing railway track was approved alongside a four-lane highway expansion project all cutting through irreplaceable forest habitats. In Karnataka, hydroelectricity projects and highway expansion plans present unimaginable extents of deforestation and habitat loss.

The Nilgiri tahr is another cherished inhabitant of the Western Ghats. Linear infrastructure projects in the form of roads and railways continue to threaten parts of these rich, montane rainforests across India. Photo:Ragulan Kathirnathan.

Our destructive actions have devastating repercussions, often felt by communities that participated the least in the cause. For those of us living in cities that are lit by hydroelectricity generated in the Western Ghats, it may be hard to fully fathom the destructive systems we have created. Human systems that exploit habitats and take more than they can, offer short-term benefits to each one of us, making them seemingly indispensable. If we find compassion and empathy for life, we can begin to unravel these systems and move towards a world that can sustain us all. For those of us struggling to construct empathy for shapes and forms of life that are unfamiliar, it is worth looking for common ground in the blissful mundanity of daily life.