My father helped my three-year-old sister Prakriti and me get ready early morning, while my mother put together our snack bag. She carried a notebook and pen with her. “You never know what you may see in the forest!” she said. My father, a wildlife photographer, packed his camera too.

We got into the jeep and set out, excited for the safari but still very sleepy. While we waited at the forest gate, our naturalist Mugdha told us that trees are either male or female. Only female trees give fruits.
Our jeep was the first to enter the park that morning. Mugdha warned us in a low voice that it is very important that we look out for signs of animals on the dust track. Shortly after, we found pugmarks; we were able to spot a tigress with her three cubs. She crossed the water to go over to the tall grass on the other side.The three cubs tumbled around, pulling each others’ tails playfully. It was beautiful to see these animals with their soft orange fur, black stripes and lovely pink noses.

We quickly gobbled our breakfast that had been carefully packed for us in steel containers. As this is a national park, it is also a no plastic zone. There was some hot chocolate as well for Prakriti and me. Suddenly, waking up so early seemed nice! After breakfast, we saw many birds swooping down to the lake for a drink of water. My favourite bird was a nightjar sleeping on the grass. 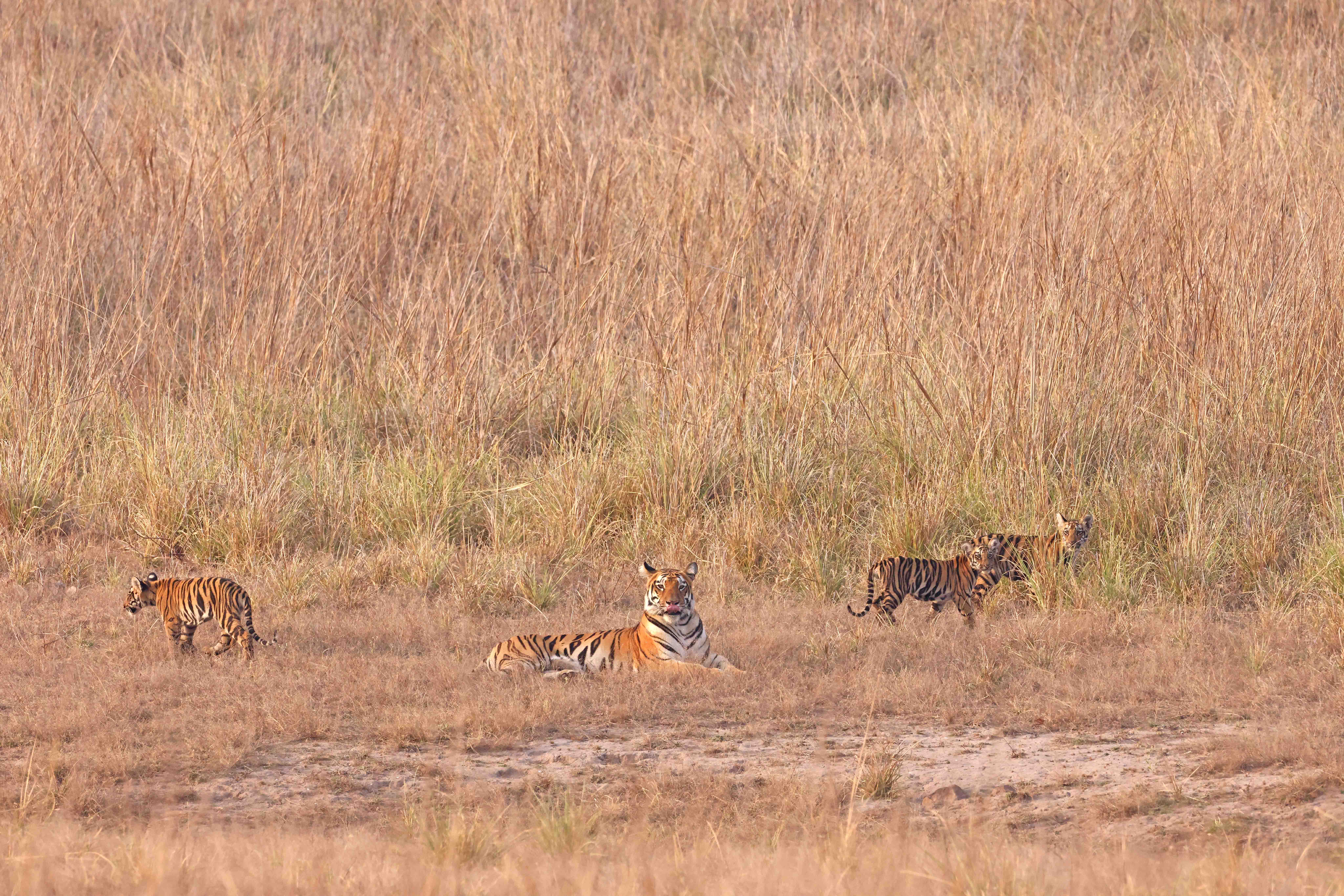 After that, we saw these tall black pillars on the side of the road, made centuries ago. In earlier times, people didn’t have mobile phones, i-pads or other electronics to call each other. Instead, they built pillars for the king to use when he came back from a hunting trip. At the top of these pillars they used to hang a long rope, which was attached to big bells. And when the king used to come back from his hunt, people would pull the rope and ring the bells. My mother told me that these pillars must be the oldest organised long-distance communication system in India.

When we saw a wild pig, my sister Prakriti shouted gleefully, “Look Aranya, it's Peppa Pig.” We all had a good laugh at that.  He was very stout and short, and had very small legs.

Then we saw some trees with unusual markings; one had a bark that looked like crocodile scales. We also spotted tall Arjuna trees. My papa told me that this tree is even mentioned in the ancient Rig and Atharva vedas and that it means “white” or “bright”, perhaps because of its creamy-white flowers and bright bark.

We returned from our first day of safari tired and slept immediately. 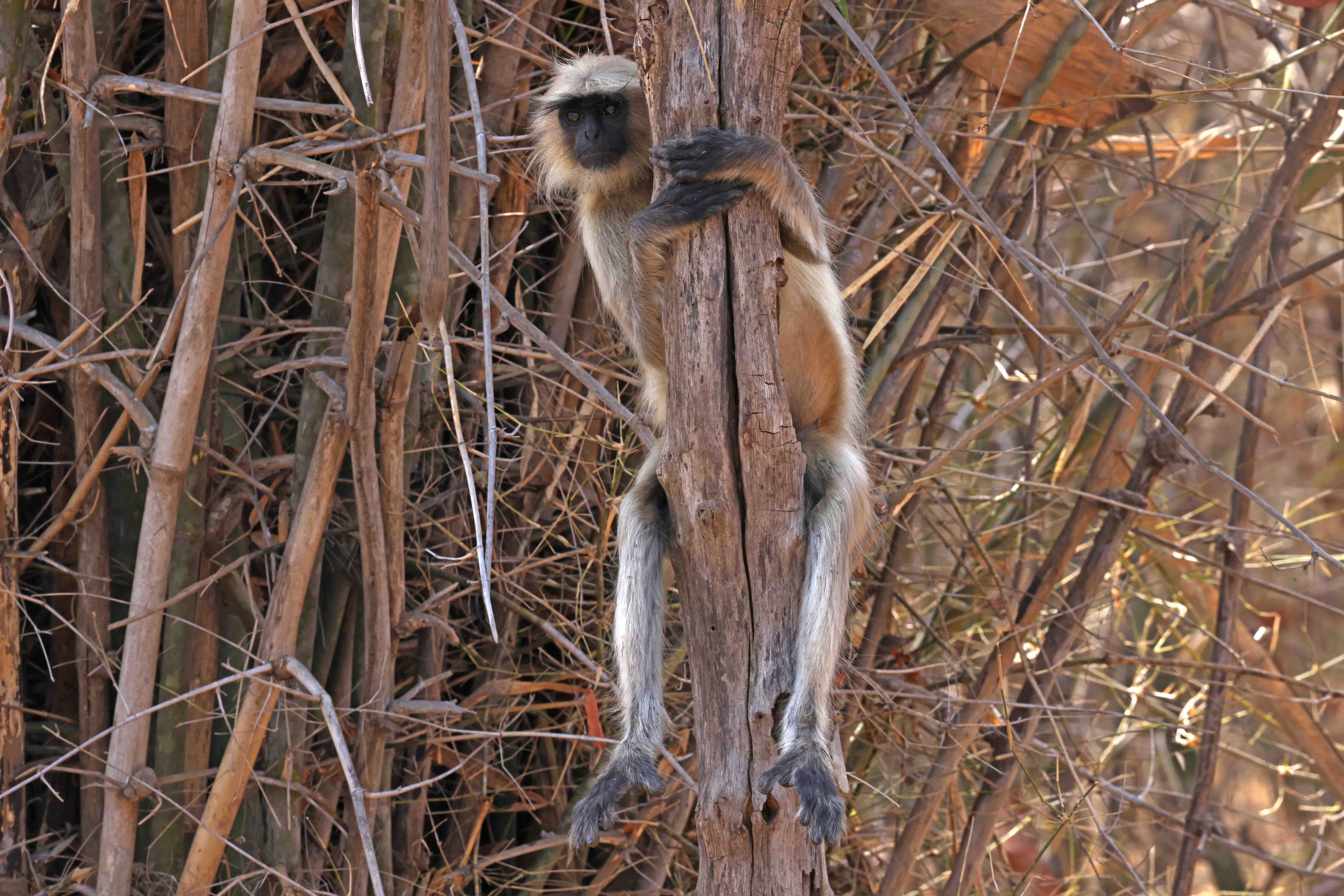 A curious langur peeks from behind a tree. Photo: Aranya Dutt Bedi

The next safari was in the afternoon of our second day. It was 2 p.m. and the sun was very hot. We packed our camera bags and headed out in the jeep again. We waited near Telia lake, hoping the tigress would come out with her cubs to drink water so we could take some photographs. We waited and waited, but nothing came, not even birds. My papa said it was more than 42 degrees in the direct sun. We began fanning our hats on each other. My poor baby sister slept in our papa’s arms because it was too hot for her. I was very sad that the tigress hadn’t come, even after we waited for her the whole afternoon. When the sun set that evening, we saw shades of pink, blue, white and yellow over the lake. I clicked a few pictures. After that, it was time to go back.

Initially, I was disappointed, but my parents reminded me that seeing a tiger is not everything. It is also the feeling of being in the jungle, taking in the clean air, observing the different coloured birds or the thirsty deer that came to the lake for a sip of water that make the experience special. I told my parents that on the next safari, I want to to go to a forest where we could walk. They said yes! 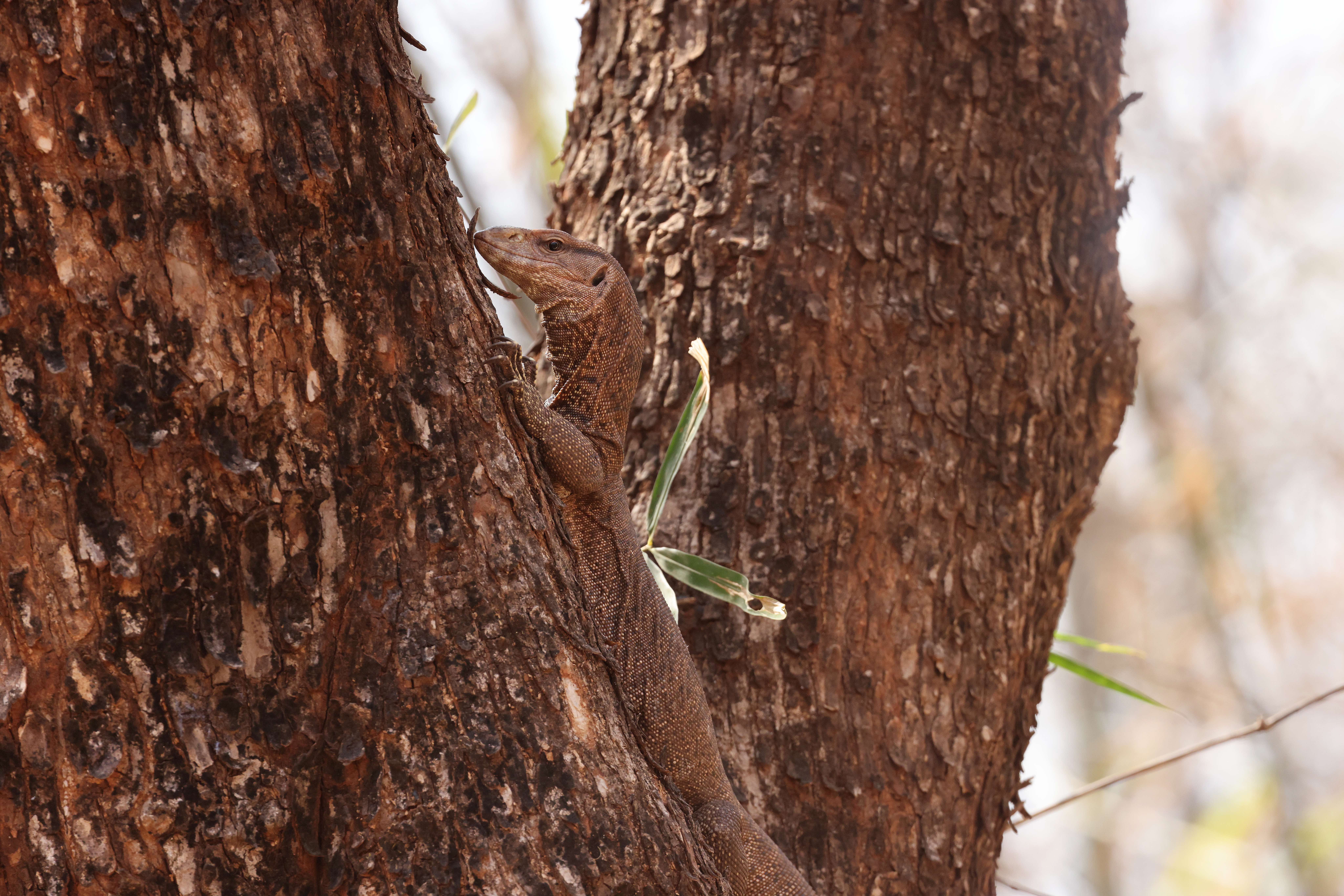 Top Tips For Kids On Safari

Aranya Dutt Bedi, 8, a student of Vasant Valley school, New Delhi, loves reading, writing, illustrating and going on walks. During the lockdown, she used her books to fundraise for local NGOs.