Red pandas endorse the strategy of incentivizing community-conservation in a remote corner of Arunachal Pradesh, which should be protected for posterity, say Rajarshi Chakraborty and Jaya Upadhyay. 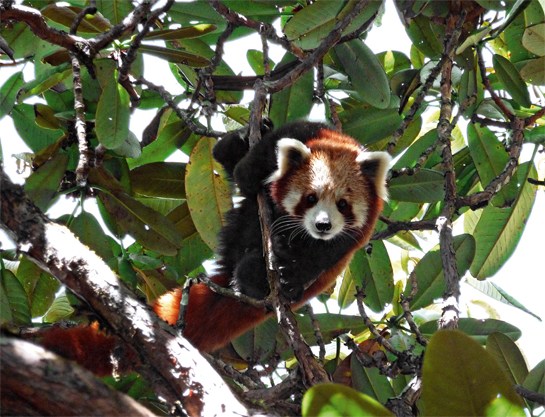 “I got a good feeling about today!" said Urgen Tsering, his breath mingling into the midst of a crisp December morning, as we trudged up a steep slope densely clothed with dwarf bamboo. It was around an hour earlier when we had left the Zemithang-T Gompa road far above Kelengteng village and entered, via a side trail, the depths of the chilly, temperate forest. Around us were giant gnarled trees of rhododendron, birch, and mountain-ash, broken by shafts of sunlight and thick bamboo patches. We were, of course, in search of the elusive ‘fire cat, the red panda, the most famous resident of the valley. Further up, all semblance of a trail ended and we had to haul ourselves up through the bamboo fortress. It was on a stretch like this that Urgen motioned us to stop, pointing to a Sorbus tree further upslope. Looking carefully, we spotted some movement among the top branches. As noiselessly as possible, we crept up further, and then, in a flash, the sunlight lit up three red pandas huddled together for warmth! Initial disbelief gave way to an immense sense of triumph. Such a sighting was rare even for Urgen, who had roamed these forests since his childhood. After a half-hour spent photographing and observing the delightful creatures, we made our way back, and on Urgen's face, we could see a thousand-watt smile.

This was, however, not the sole fire cat sighting of that Christmas week in 2012! Earlier, while camping at a windswept meadow called Kumrotser, at 3,300 m., we emerged from our freezing field hut in the morning, only to be greeted by a red panda taking a casual morning stroll across the blacktop nearby! The previous day too, true to his Midas touch, Urgen had accompanied Lham Tesring and Dorjee down a steep slope near the road and had spotted a red panda on a silver fir near the Taktshang Chu river. Things got even better after returning to Zemithang when standing in the backyard of our field camp, we spotted two Black-necked Cranes moving gracefully in the Nyamjang Chu river (chu means water in Tibetan) bed in the distance! Such is the magic of the remote, biodiversity-rich Pangchen valley in Arunachal Pradesh, which has a way of springing surprise after delightful surprise on the exploring naturalist. 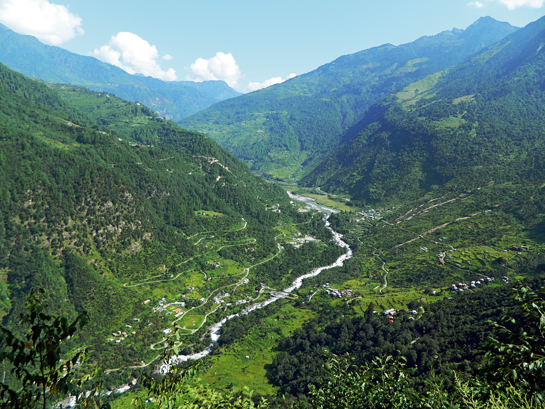 Pangchen valley centers on Zemithang, with a circle office and a health-sub center, around 90 km. from Tawang. Villages including Lumpo, Muchat Kharman, Kelengteng, and Soktshen dot the steep slopes, with both the Chinese and Bhutanese borders running close by across desolate, alpine slopes. Monpas, one of the major tribes of western Arunachal Pradesh, are the inhabitants of the valley. Buddhists, with a rich culture and tradition of conservation, influenced by both Tibet and Bhutan, depend largely on agriculture and livestock rearing and generally refrain from hunting. Since 2007, our work here has taken us into remote corners of the valley, while conducting surveys which are part of a WWF-India program on community-based biodiversity conservation. The Pangchen valley exemplifies the love and guardianship of biodiversity by locals and can be held out as one of the few truly successful entirely community-based conservation models in India.

A strict set of by-laws are followed, and the area is monitored and managed entirely by the villager's management committees. Hunting, commercial extraction of timber, and other activities detrimental to wild nature are strictly prohibited inside the CCAs and are punishable with heavy penalties. Hearteningly, it is the villagers who regularly patrol the remote highlands and our knowledge of its biodiversity comes largely from their documentation.

One task before us is to explore alternate, conservation-friendly livelihoods, in addition to the community-based tourism efforts that are already underway. People like Degin Dorjee and Lham Tsering are the pillars of this conservation program, and with local and WWF-India colleagues they are building lasting bridges between villagers and conservationists. 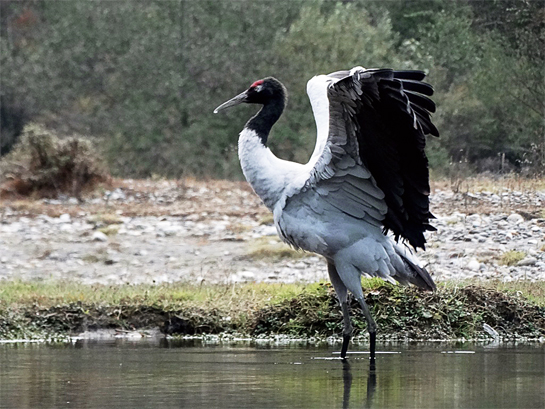 A VALLEY OF ABUNDANCE

The conservation efforts in Pangchen valley are collaborative, and every villager understands that frequent sightings of the red panda are an indication of the success of their endeavors. Since 2008, as a part of the overall biodiversity conservation program, we have also looked at the delineation of critical conservation requirements for red pandas across western Arunachal Pradesh. Field surveys between 2009 and 2013 revealed an amazing abundance of fire cats in the valley, including the three described at the start of this article.

Apart from red pandas, we have also recorded Asian black bears, common leopards, wild dogs, Himalayan gorals, serows, large-eared pikas, leopard cats, and the elusive musk deer. The avifauna of the region is equally impressive and diverse, with restricted-range species such as the Beautiful Sibia, Sclaters Monal, Blyths Tragopan, and of course, the most famous winter guest - the Black-necked Crane. The higher reaches of the CCAs sport a multitude of alpine lakes that offer breeding sites for waterfowl including the Ruddy Shelduck. More than 160 bird species have been documented by us in and around the valley during these surveys.

Because of such community protection, wild creatures can often be seen in close proximity to human habitation. After dark, car rides to Lumpo and Muchat, have thrown up sightings of barking deer and crestless porcupines, and in daylight hours the endemic Arunachal macaque is a common sight in and around the village precincts. On one trip we even encountered a scampering leopard cat that stood transfixed in our headlamps for a few seconds before vanishing into the bush. In March 2014, returning from a site visit to Zemithang, we saw a pair of smooth-coated otters basking calmly on a rock protruding from the Nyamjang Chu, and obtained what turned out to be the very first photographic record of the species from the state!

The valley around Zemithang also happens to be one of probably only two documented wintering sites of Black-necked Cranes in India. The arrival of the thung-thung-karma, as Black-necked Cranes are affectionately called by locals, is considered auspicious for the valley and the birds are practically venerated and protected from all harm. The presence of defense agencies including the Indian Army, Indo-Tibetan Border Police (ITBP), Shasastra Seema Bal (SSB) have actually served to protect the biodiversity even further and individuals in the armed forces are proud of their role as protectors as a result of repeated sensitization camps conducted to win their support. Vous pourriez ne enjambée être dans mesure avec prendre Levitra générique , ou vous pourriez renfermer exigence d'un ajustement en même temps que la posologie ou d'une attention spéciale pendant le traitement supposé que toi présentez l'une corroborés affections énumérées ci- au-dessus.

A STITCH IN TIME

Sanctuary Asia readers should not, however, be left with the impression that all is well and that the ecological future of the area is secure. Beneath the surface, the Pangchen valley has biodiversity and livelihood problems that need urgent fixing. Many residents say that they have been forced to give up agriculture in favor of tiny kitchen gardens because crop damage at the hands of wild pigs, porcupines, macaques, and barking deer make it impossible to grow crops like millet and maize on a large scale. Most villagers, therefore, find themselves working as wage laborers for government agencies. However, in our observations, this reduced dependence on agriculture is equally attributable to the lure of easy money and less intense labor associated with wage work. Such realities have severely tested the conservation-friendly attitudes of the Monpas. Those of us seeking to protect biodiversity have now made it our goal to find effective conflict-mitigation strategies so that the food and livelihood security of the community is assured.

We know we are at crossroads. The biodiversity of the valley and its human residents have poised on an ecological knife-edge thanks to the many developmental projects (including hydro-electric projects) being planned in the Tawang district. How these will impact habitat loss and population and change the behavior of wild species, and how such changed behavior will be responded to by humans is anyone's guess. We must, however, hope and presume that future generations will not abandon the close bonds their elders shared with nature.