The Personal Lives Of Frogs

We spoke in whispers as our torchlights lit up bits of the otherwise pitch-black landscape. In the dense forests of the Western Ghats, famously known for mighty elephants, elusive leopards and venomous snakes, our eyes were transfixed to the ground, searching for the source of the incessant croaking.

We finally traced the calls to a small frog, camouflaged amongst leaves on the stream banks, known as the Kempholey night frog Nyctibatrachus kempholeyensis. About the size of a walnut, this nocturnal frog is one among the 228 species that are endemic to these forests. A global biodiversity hotspot, the Western Ghats account for just about four per cent of India’s area, and yet harbour 75 per cent of India’s amphibian species. New species continue to be discovered, and only a handful of the known ones have been studied. Fuelled by curiosity, we braved the oncoming monsoon to learn more about this endemic night frog. 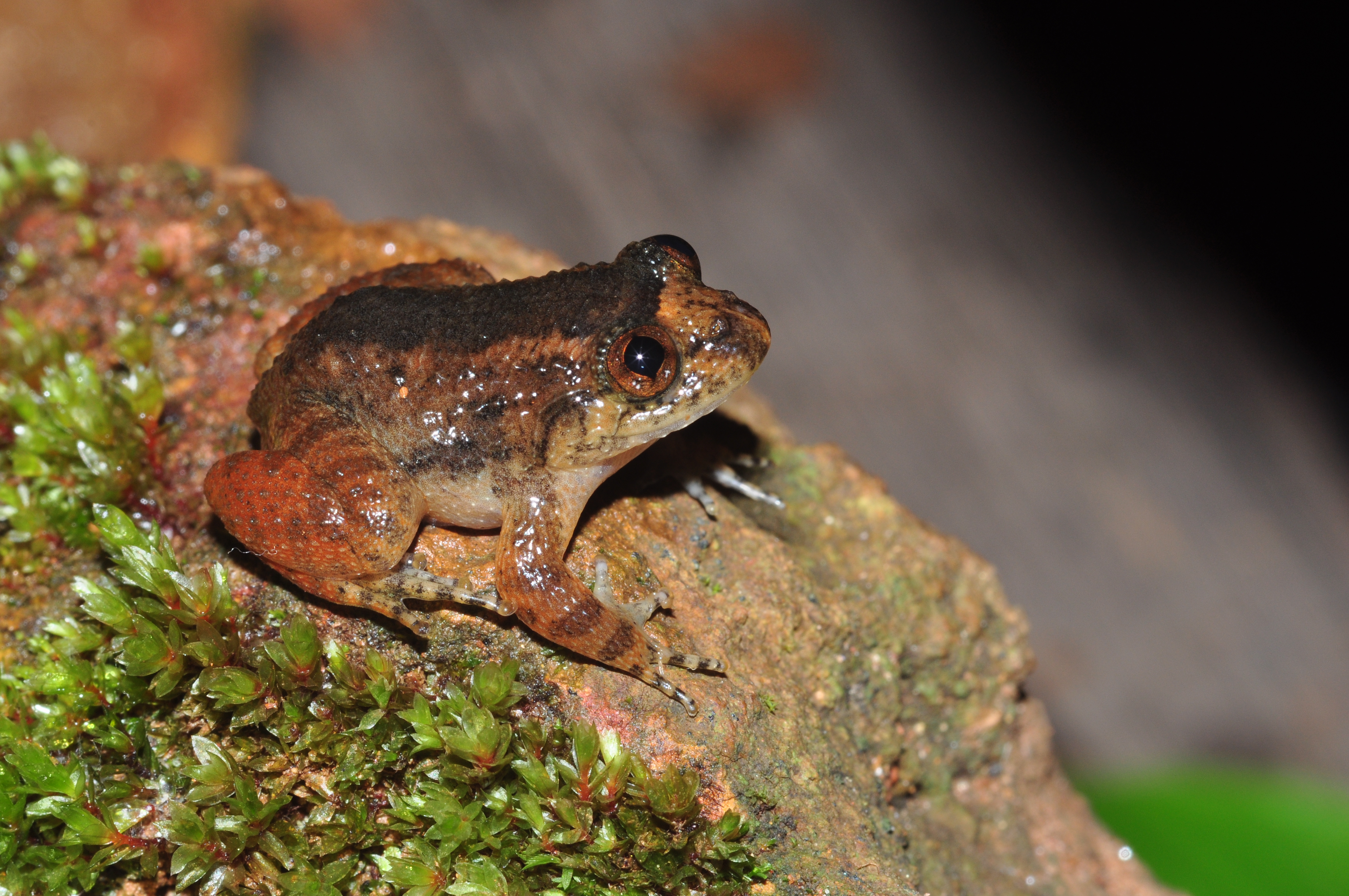 The night rang with the mating calls of Nyctibatrachus kempholeyensis, each echoing louder than the other in an area about 20 sq. m. With so many frogs around the stream, we had identified the ideal spot to study a crucial part of the frog’s life-cycle – the breeding period. The torrential rain provided plenty of puddles and ponds, the ideal environment to lay eggs. These eggs then take, depending on the species, three days to a few weeks to transform into tiny tadpoles, which eventually break open the walls of their little homes into this world. Successful breeding is key to the sustenance of a species and can very easily be perturbed by environmental changes. For certain amphibians in Europe, breeding seasons are already shifting due to the warming climate.

In Agumbe, among the wettest places in the country, climate change has resulted in lower and more erratic rainfall. This is particularly worrying for amphibians whose lifecycle is totally dependent on water. By learning about the animal’s breeding and development, conservation strategies can be better informed.

We scanned the area around, looking for eggs underneath leaves and fronds, making note of their number, the plant species on which they were laid, their size, colour and other physical characteristics. These eggs were then observed every day as they developed into tadpoles. An important aspect of our study, however, was the mating process itself. And thus started the quest of prying into the lives of these tiny amphibians.

But it takes two to tango, and although males were easy to spot thanks to their mating calls, the silent females were much more elusive. We would wait for hours, much like the male frog vocalising in every direction to attract a female, for her to appear.

This went on for a couple of days with no luck, until that fateful night when my research supervisor Dr. K.S. Seshadri  signaled to me. I followed his torchlight to find a frog very similar to the males that we had seen, but larger. Stealthily and steadily, it was moving towards a vocalising male, one hop at a time. We had finally spotted a female. 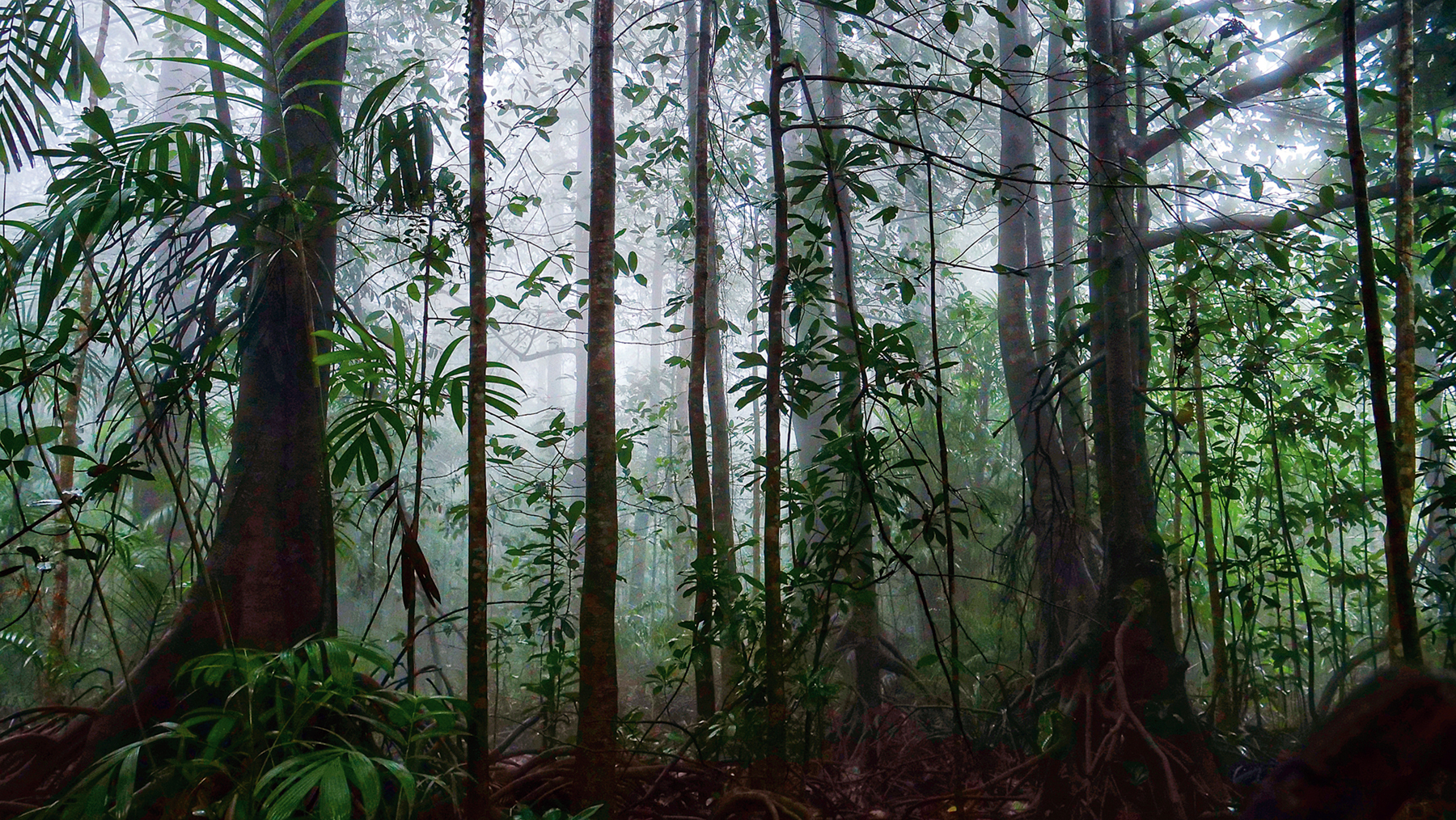 Coupled with habitat loss, deforestation and industrial activities, such ethereal forest scenes could soon become images from the past. Photo:Pradeep Hegde.

In frogs, fertilisation is usually external. The male frog embraces the female in a behaviour called amplexus, positioning himself on top of the female such that when the eggs are released by the female, they are immediately fertilised by the male sperm. These eggs then transform into tadpoles, a period during which parents in some species protect the eggs till they hatch.

For example, in a frog closely related to the Kempholey night frog, the male covers the eggs with mud to keep them safe – a unique behaviour not observed in any other frog species. In another bush frog, Raorchestes chalazodes, the eggs are laid inside bamboo stems, and the male guards them against predators which include but are not limited to cannibalistic frogs from its own species. Who knows what interesting behaviours other frogs, in our case the Kempholey night frog, might be displaying?

The female inched closer to the male as we stood there, transfixed. What I was seeing seemed surreal, yet it was the most routine thing ever, fundamental to the existence of almost every species. The male now croaked even more softly, as if gently coaxing the female to come to him. The female finally hopped on to the leaf on which the male frog was sitting. The male positioned himself over the female. Amplexus periods can vary from species to species. We switched on the stopwatch to observe how long this one would last.

I was already anticipating white, bead-like eggs on the leaf. The eggs that I would then observe every few hours, as they transformed into tadpoles. But right at that moment, something went astray. The mating stopped midway and the female jumped off the leaf. The male croaked again, as if trying to win her back. For a while, as the frog called fervently, it looked like she was going back to him. She again took a hop in his direction but then suddenly changed her course and hopped away.

The male was still on the leaf, croaking in all directions. We waited for a while, hoping that she would come back, but sadly, it was over between them. The female had hopped away, into the darkness, perhaps towards another male. We waited a little longer and then trudged back to our research station, disappointed.

Was it common for mating efforts to not go to completion? How do the females decide which male to mate with? Even though we tried our best to be unintrusive, did our presence disturb them? There was no way to answer those questions now.

The next day at the break of dawn, the rain was still pounding down. I went to the stream again, for my daily observations at the field site. To my surprise, under the leaf where we had witnessed the courtships of the night before was a clutch of eight beautiful white, bead-like eggs. 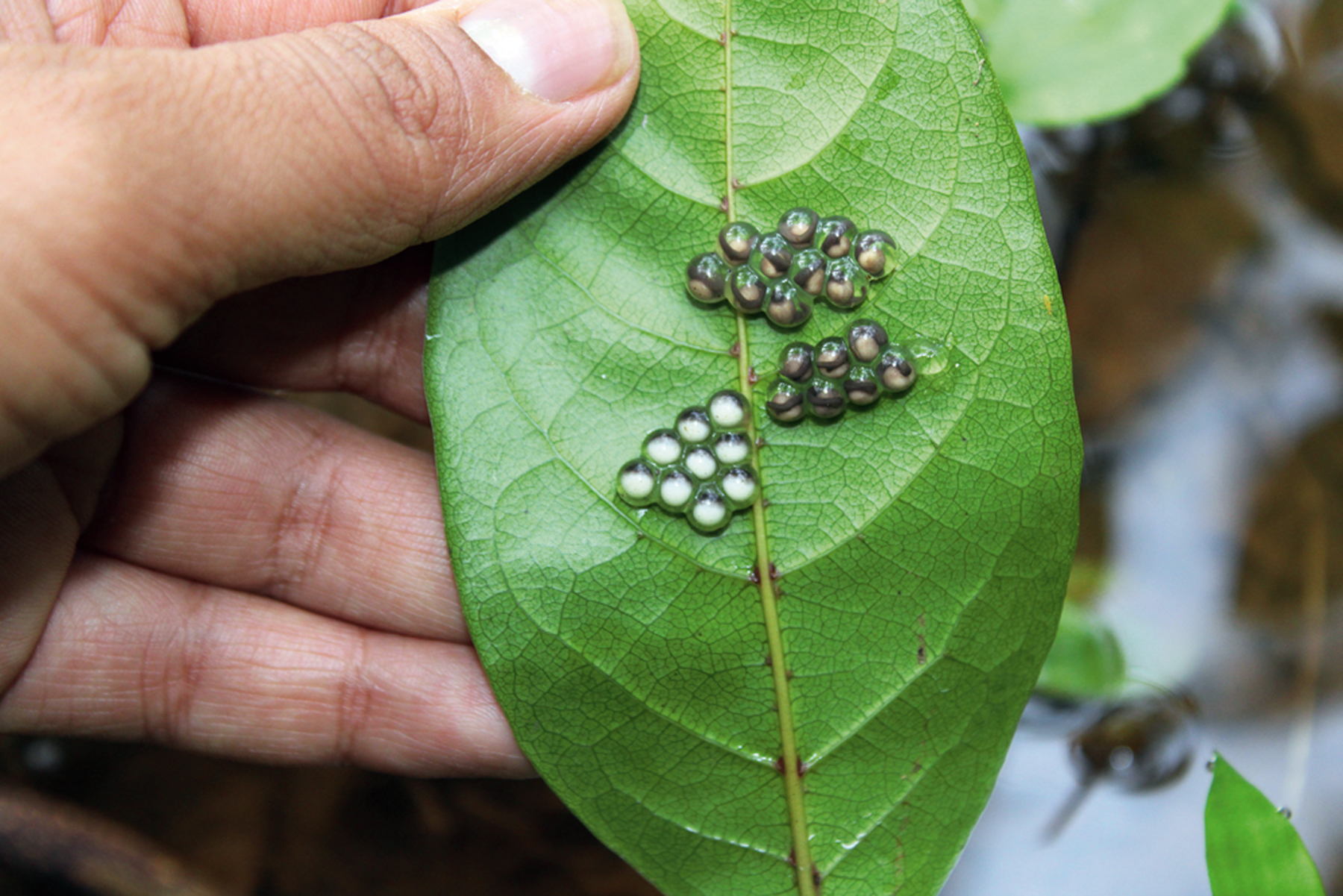 After a disappointing night survey, the author was pleasantly surprised the next morning to find a clutch of white bead-like eggs laid on the underside of a leaf by a Kempholey night frog female. Photo: Neelakshi Varma.

Did the two finally mate later that night? Or did another female come his way? We shall never know. Observations in the field are often challenging, subject to the whims and fancies of everything, ranging from the weather to the temperament of the animals under study. A complete understanding of the breeding behaviour would take much longer. Many more field studies by researchers, peppered with excitement and disappointment alike, will piece together a picture about this frog’s behaviour and ecology.

With all that we now know about global warming and species loss, one can only hope we have enough time to learn at least something about these animals before they are wiped out. At least 90 amphibian species have already become extinct worldwide. The Western Ghats face many threats, from climate change and deforestation to industrial activities like mining and oil and gas exploration. One hopes that it’s not too late, for the sake of the forest, home to such biodiverse species, but equally for the sake of us. 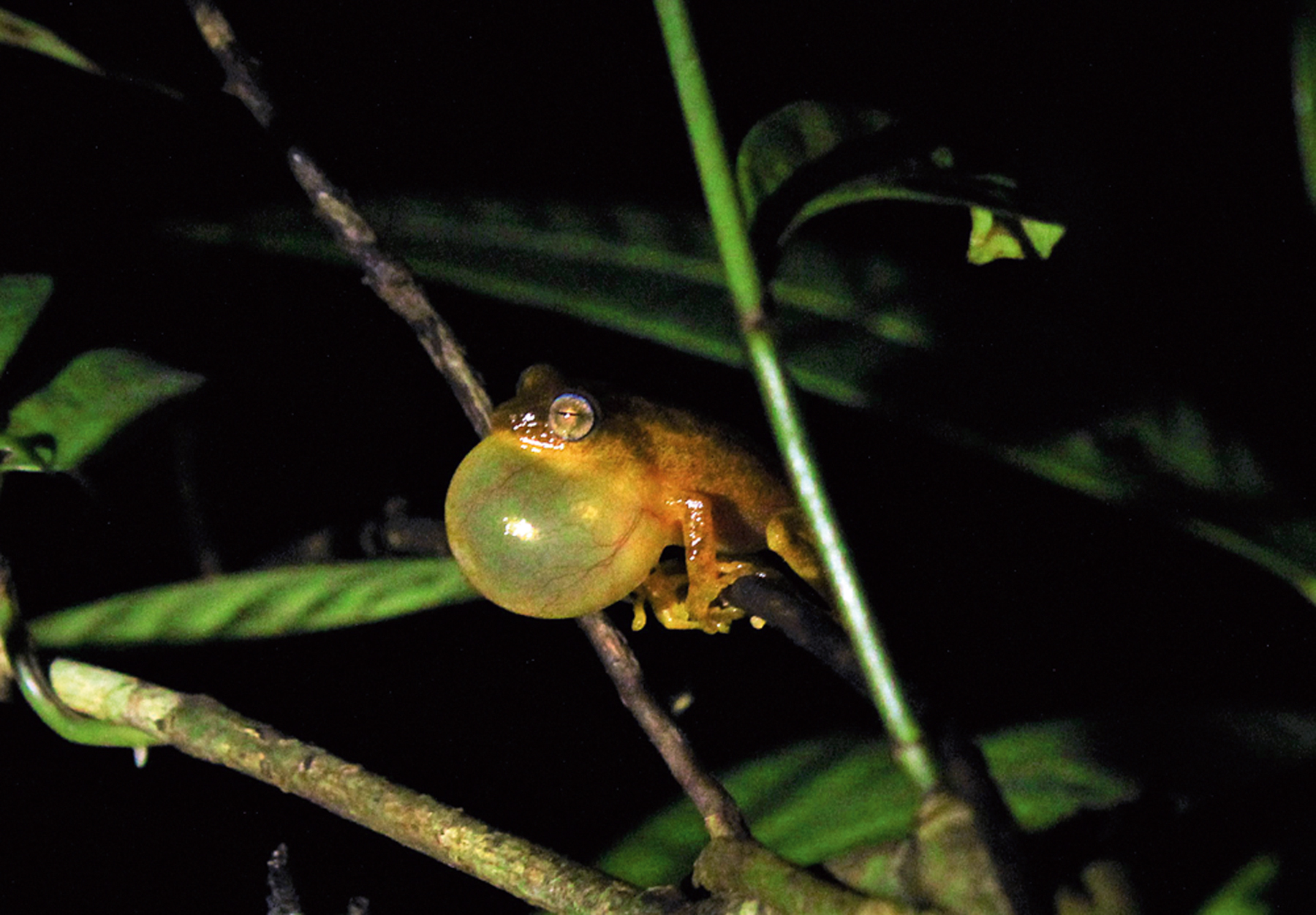 Neelakshi Varma is a Ph.D. scholar at the University of Edinburgh, where she studies the malaria parasite. She loves writing about scientific wonders that excite her, including the antics of frogs in the Western Ghats.