The Sugarcane Tigers Of Pilibhit

The first time he heard the rustle in the sugarcane fields, he was not alarmed. But after the second time, Sachin Gangwar knew it was not the movement of a small animal. The next moment, he froze – a tiger, just 100 m. away. 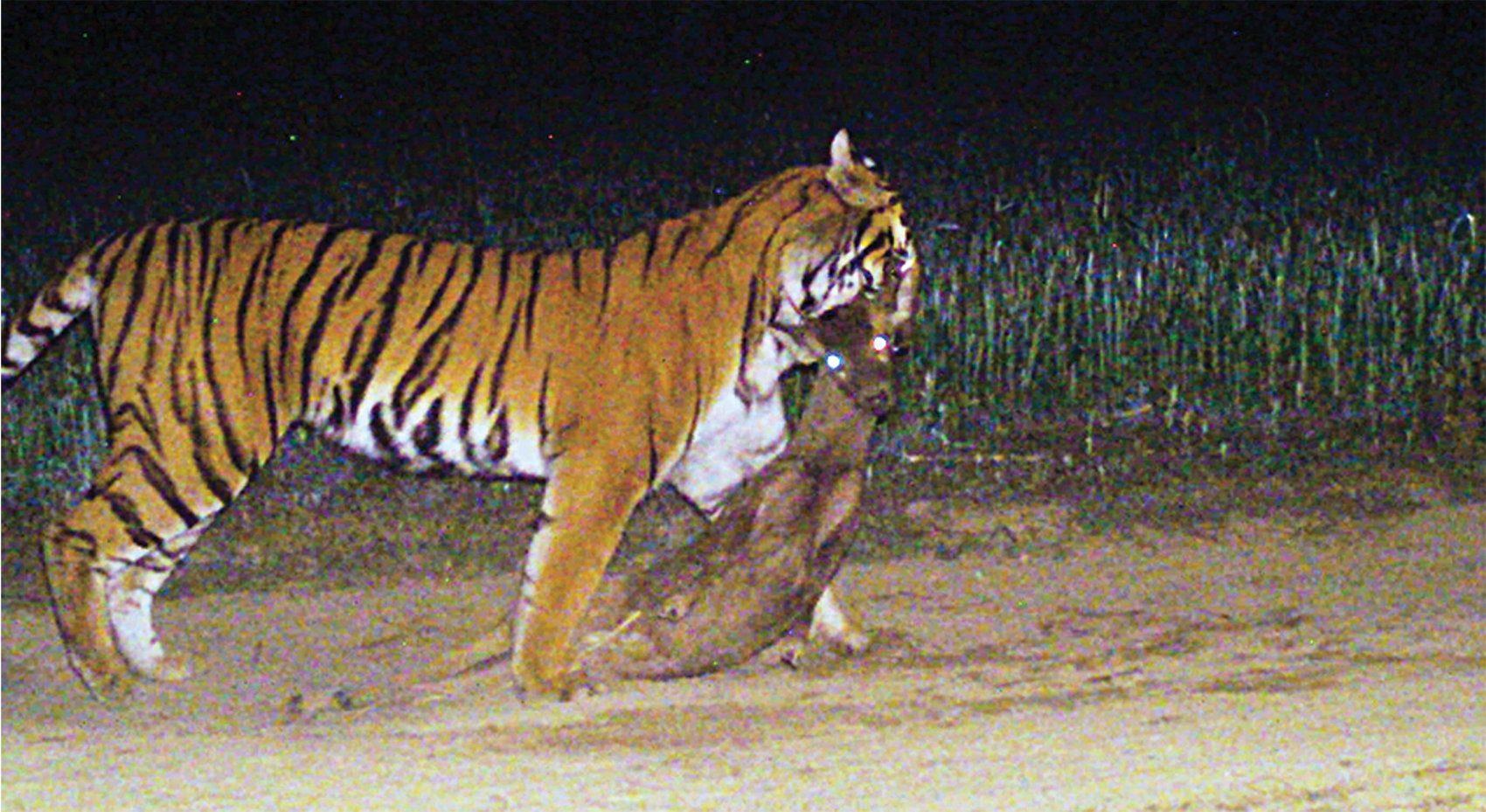 One of Amaria’s ‘sugarcane tigers’ with its prey. Local villagers are demanding that the tigers be shifted out quickly, but neither is the Forest Department being funded and equipped to create suitably large rewilding enclosures, nor are efforts being made to wean farmers away from sugarcane, an inappropriate crop that forces large carnivores into conflict with humans. Photo: Pinaki Prasad Singh.

Cats in the Field

In the past three months, tigers have been spotted in the villages of the Lalaurikhera block in the Pilibhit district, Uttar Pradesh, seven times, confirmed by pugmarks in each instance. The latest sighting was in the last week of March 2021. And while it’s an unusual sight for the villagers at Lalaurikhera, it is not so strange in the Amaria block, some 25 km. away.

Over the past nine years, Amaria has been home to “sugarcane tigers” – big cats that were born or grew up on sugarcane farms, where they are more comfortable than in forests. Last year, 10 adult tigers were confirmed from Amaria, plus three cubs.

Now, they have begun moving further, to Lalaurikhera, over 30 km. from the nearest core forest of the Pilibhit Tiger Reserve. “We had heard of Amaria’s tigers, but never had a sighting here,” Sachin, a sugarcane farmer from Handa village who was the first to spot one, said. “We want the authorities to do something before they make the cropped fields at Lalaurikhera block their permanent home and this leads to conflict.”

The tiger he saw was a two-and-a-half-year-old male. “When tigers grow up, they leave their mothers to make their own territory normally when they are around two and a half years old,” says Divisional Forest Officer of the forest and wildlife division Sanjeev Kumar. “Tigers generally migrate along river courses and since the Apsara river flows directly from Amaria to Lalaurikhera, they may have followed the river to reach here.” WWF-India has installed many camera traps in agricultural areas at Lalaurikhera to monitor the movement of tigers but we still do not know exactly how many tigers may have migrated so far.

On March 13, 2021, a young tigress from Amaria became entangled in a net set up by local farmers around a sugarcane farm to trap wild pigs in Lalaurikhera’s Harchuiya village. The DFO told us the tigress was about two-and-a-half years old, 142 cm. in length, weighing 140 kg. “She had been here from the previous morning when she was spotted entering a sugarcane field. Unable to spot her for a day and night, forest teams began searching for her using high-power binoculars and drone cameras. She was finally located, entangled in a net, rescued and released back into the Pilibhit Tiger Reserve,” he added. 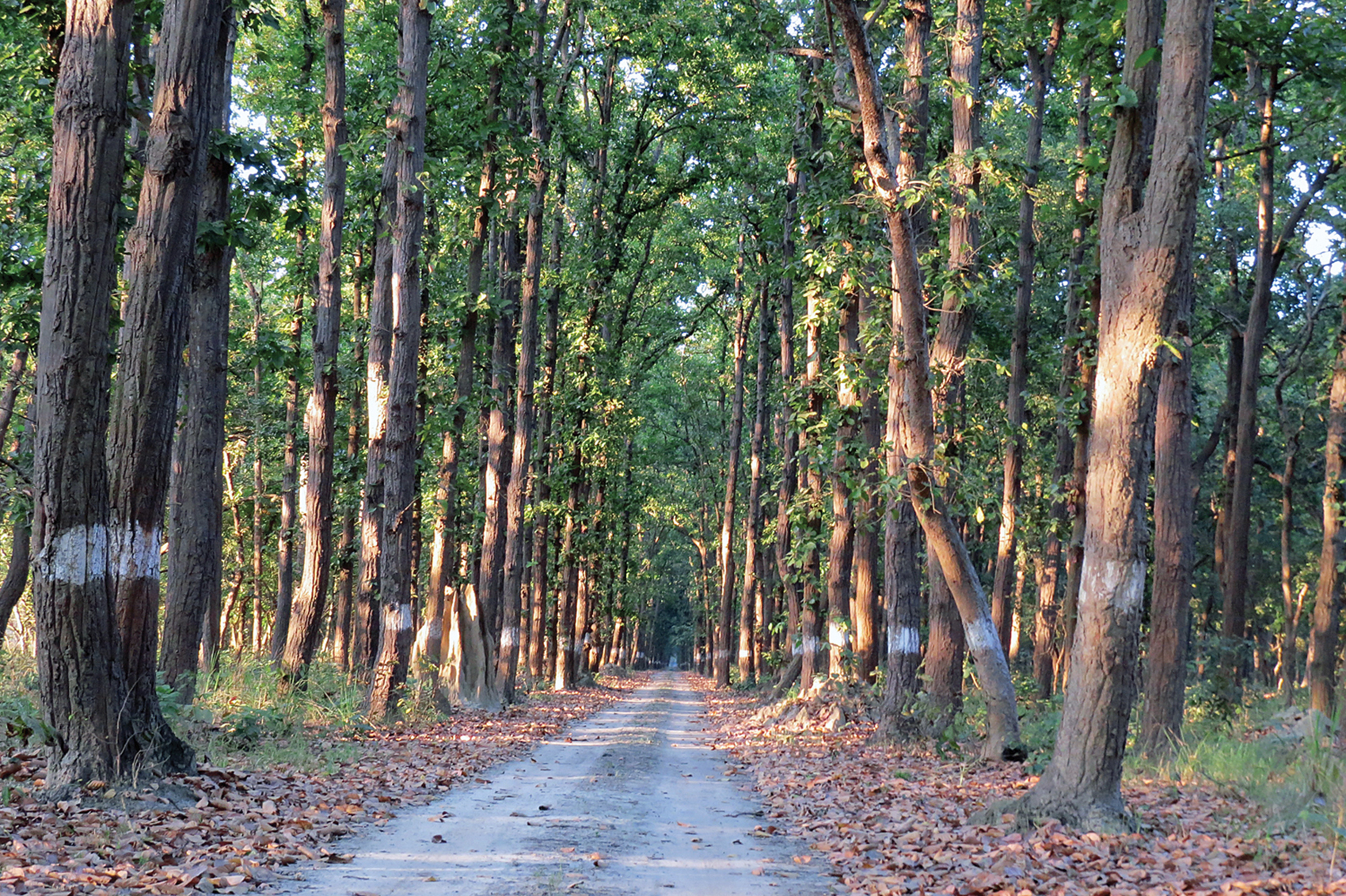 The Pilibhit Tiger Reserve, Uttar Pradesh, is part of the Terai Arc Landscape where WWF-India has been working for over two decades to ensure habitat integrity and connectivity. Located in the upper Gangetic Plain, its characteristic sal forests, tall grasslands and swamps host a great variety of species, including an estimated 65 tigers. Photo: Dr. A.J.T. Johnsingh.

The sugarcane tigers are believed to be the offspring of a tigress that had first migrated to Deuni dam area under Amaria block in November 2012 along with her three cubs. Forest officials believe that this migration could have been influenced by the behaviour of mother cats of shifting their cubs to safer places for their protection from male tigers that are often known to kill cubs from earlier litters, with intent to mate with the female.

The agricultural belt of Amaria is vast, saturated with water streams from two rivers, plus a feeder canal. Not surprisingly, herbivores and antelopes including deer, wild pigs, nilgai, stray cows, bulls and calves, are abundant and with food, water and secure hide outs, tigers would understandably turn the human-dominated areas into their territory. Temporarily at least, such features allow ‘sugarcane tigers’ to avoid conflicts with humans. But for villagers, though the tigers may not have posed a threat thus far, they live under constant fear of attack. “Their growing population in our agricultural fields will inevitably result in fatal human-tiger conflict in the future. We want them to be shifted to the wild,” said Paramveer Singh Perry, a farmer of Surajpur village in the Amaria block. Some local farmers warn that they will take matters into their own hands and shoot the tigers, even if that means facing imprisonment, because they fear for the lives of their families. 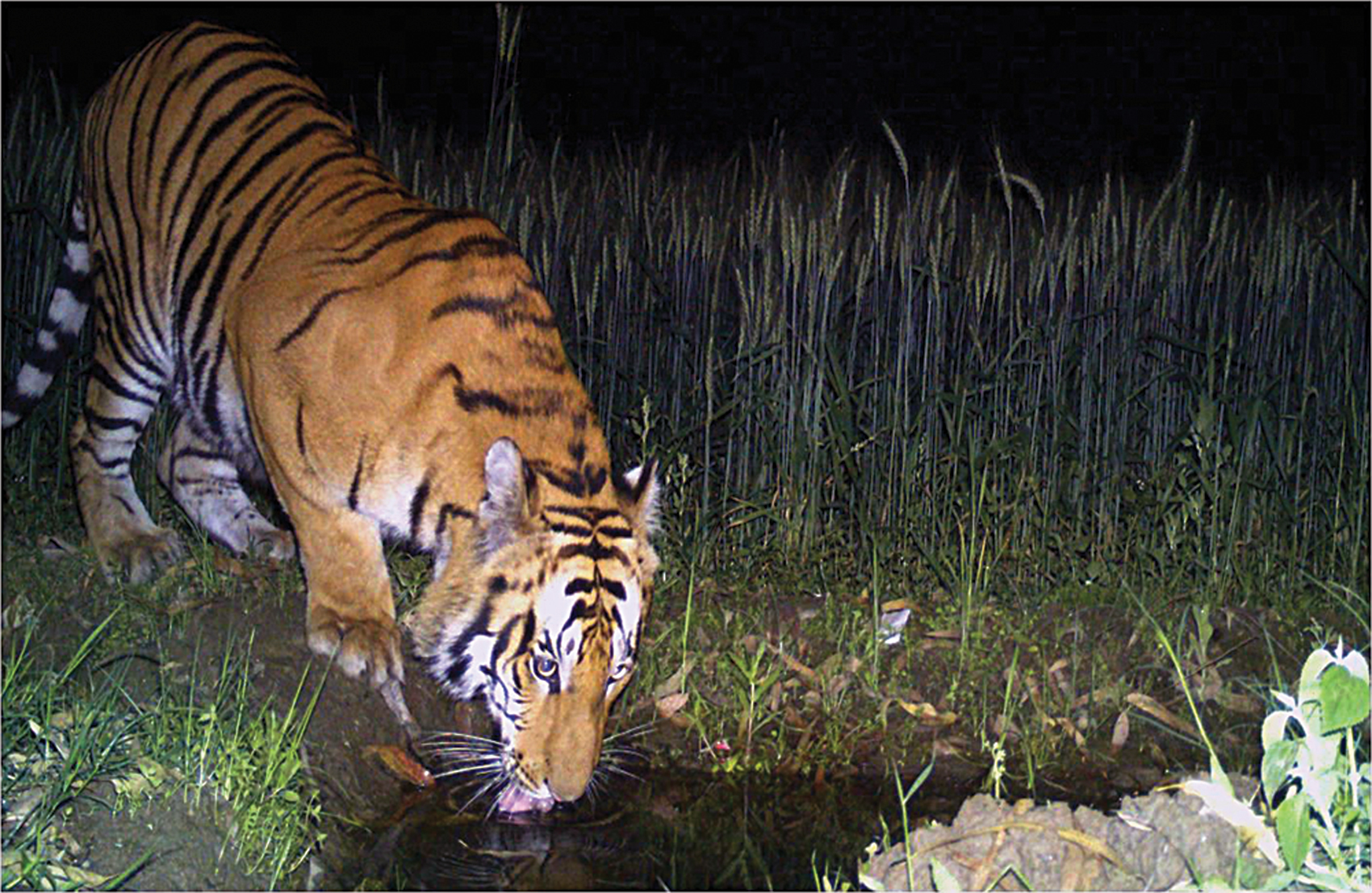 A tiger quenches its thirst in a water pit in a wheat field in Amaria village. In 2020, 10 adult tigers and three cubs were reported from the village’s fields. Photo: Pinaki Prasad Singh.

“The translocation of sugarcane tigers to non-tiger zones of the country is under consideration. But because they have become habituated to living in human-dominated areas, we will first need to house them in rewilding enclosures until they are adapted to an exclusively wild environment.” If there is adequate prey and suitable habitat, there is no reason why this would not work. However, delays are being faced in the allocation of money from the Compensatory Afforestation Fund Management and Planning Authority (CAMPA). These funds are vital to set up the rewilding enclosure in the Pilibhit Tiger Reserve. This has held up the translocation and every day’s delay renders the rehabilitation process more difficult."

The first ever official estimation of sugarcane tigers in Pilibhit was initiated in 2020 by the Uttar Pradesh Forest Department authorities in coordination with WWF-India, but the final report is awaited. Meanwhile, a plan has been mooted to bring in five elephants from Karnataka to monitor the sugarcane tigers. 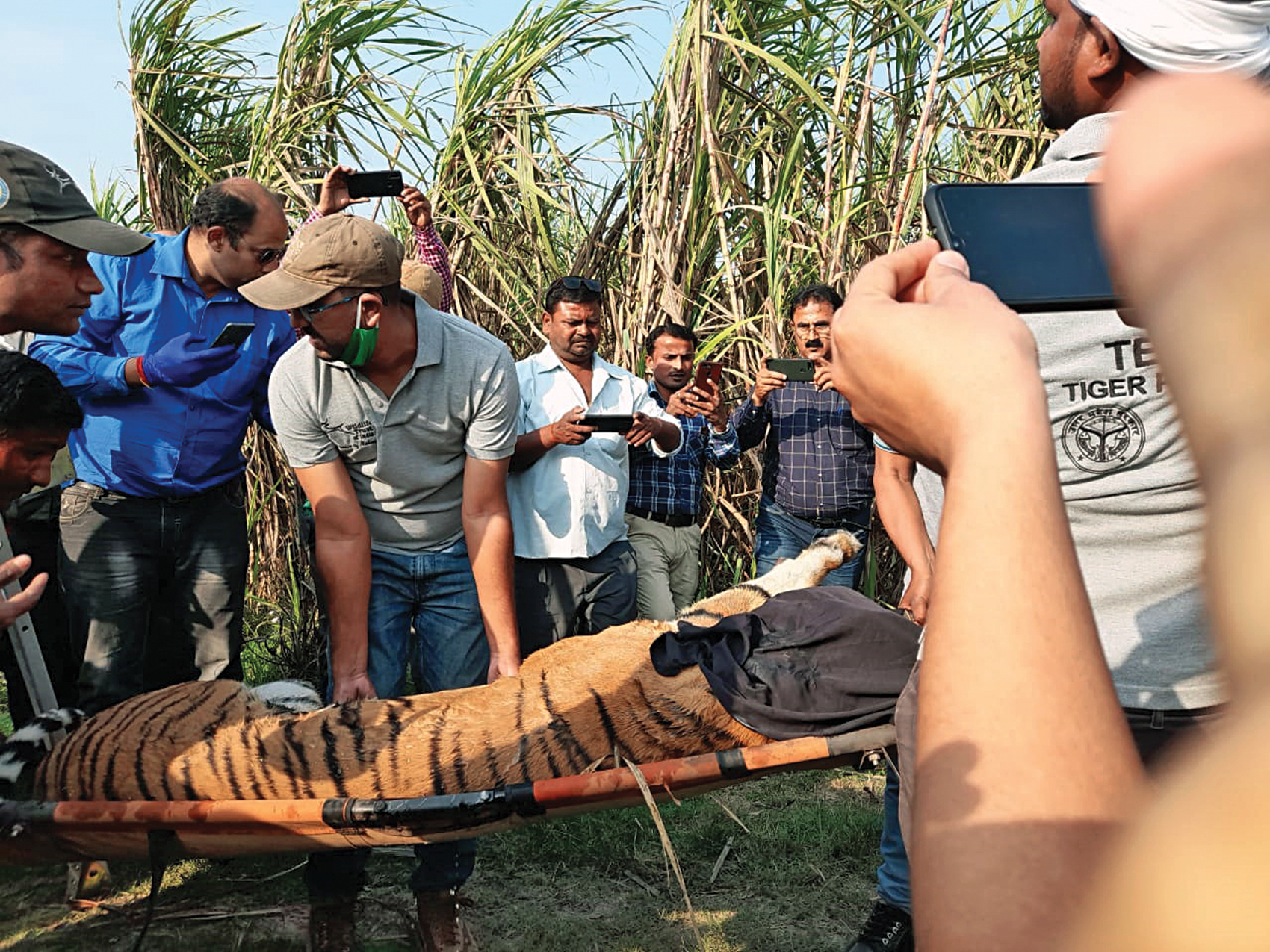 A tranquilised ‘sugarcane tigress’ being shifted to a cage on March 13, 2021. The tigress had walked from Amaria to Harchuiya village in the Lalaurikhera block. She got entangled in a net meant for wild pigs, and was released by wildlife officials in the core area of the Pilibhit Tiger Reserve the very next morning. Photo Courtesy: Naveen Khandelwal/DFO, Pilibhit Tiger Reserve.

Experienced wildlife conservationists stress the urgent need for the prompt translocation of these sugarcane tigers to wild habitats, as much to protect the tigers from poachers as to protect farmers from living in constant fear of death.

In the words of Kaushalendra Singh, former member of the Uttarakhand State Wildlife Board: “Unlike protected forests, agricultural belts lack appropriate safety and security measures. This vulnerability may attract poachers and wildlife criminals to target the sugarcane tigers.”

I agree with him, prevention is inevitably better than cure.


Covering parts of Pilibhit and Shahjahanpur districts in northern Uttar Pradesh, the Pilibhit Tiger Reserve was notified as recently as 2014, and remains one of the narrowest protected tiger habitats in the country. The sal forests, Terai grasslands and swamps of this landscape flourish well into the low-lying hills of Nepal, while the reserve embraces the border between the nations on the upper Gangetic plain. This wondrous blend of ecosystems forms the Terai Arc Landscape (TAL), a confluence of 14 trans-bordered Protected Areas. The Terai’s three major charismatic species: tigers (see Sanctuary Asia, Vol. 24, No. 6, June 2004, The Forgotten Tigers of Pilibhit), rhinos and elephants can be seen in Pilibhit and the adjacent Dudhwa Tiger Reserve. Rhinos and elephants are more transitory, particularly in the LaggaBagga area of Pilibhit.

Despite being nestled in a heavily populated region, the Pilibhit Tiger Reserve has seen a steady rise in tiger numbers over the years since its notification, as much as doubling over the decade. In 2020, the reserve won the inaugural TX2 Award, presented by IUCN, UNDP, Global Tiger Forum and several other organisations. The success of its commendable efforts is bittersweet given the challenges – the vast swathes of agricultural lands that extend close to natural habitat in the district now potentially host more cats, and other wild species than can be sustained. Human-wildlife encounters look like they will rise, placing both wildlife and people at unpredictable risk.

Pilibhit’s unfolding story is a stark reminder that wildlife conservation has no clear-cut solutions and processes, but must adapt and transform by evolving along with the changing relationship between people and the wild.

A native of Pilibhit, Keshav Agarwal is a wildlife writer who has been following conservation issues in Uttar Pradesh. He is committed to highlighting threats and garnering support of locals and authorities to ensure wildlife protection.