Kadmat appears before us under large castles of cumulus, a thin strip of land that breaks the horizon in two. The sea is a marbled, mint green, and the reef a blur under moving water. As we pull into the island, details of land emerge: coconut trees, white sand, tuna boats parked in the lagoon. It is difficult to believe that these atolls are among the most vulnerable in the world today. From a distance, life seems languid, framed in lazy postcard beauty. But if change is inherent to any system, then perhaps nowhere is it better illustrated than in the reefs of the Lakshadweep.

The El Niño event of 1998 devastated the world’s reefs, causing the worst coral bleaching in recorded history. The Lakshadweep lost almost 90 per cent of its live coral that year. Since then, its reefs have suffered a series of warm water events, each episode further weakening the bond between coral and its symbiotic microalgae. When seawater temperatures rise beyond a certain threshold, the coral animal expels its photosynthetic algae, bleaching a dull white. Bleached coral are more susceptible to starvation and disease. After an event like this, the reef can die rapidly, forests of coral giving way to grey necropolises of stone and seaweed.
But the Lakshadweep has deviated from this narrative of decline and death. Since 1998, and through the repeated coral bleaching events of 2005, 2007, and 2010, the reefs here have shown a surprising capacity to resist and recover from stress. Why? What makes some reefs recover and others die? That is a 16-year-old question, one whose subtleties have intrigued coral scientists since the mass coral bleaching of 1998. The only thing that can be safely assumed is that for recovery to begin, coral must take root again and grow.

Corals, like many other marine creatures, have two very different phases in their lives. In their early days just after fertilisation they are wandering larvae, going more or less where local currents take them. Most are eaten by fish and other creatures. Some may starve to death, and others never reach a home. A tiny fraction survives the vastness of the open ocean. By the time these larvae reach a reef, they can smell and feel where they’re going. This is the only time in their lives they can choose for themselves. And they must pick the best place to settle. Once this choice has been made, their fate is sealed. Much like a tree that has taken root, they will remain here till they die.

A reef, like any other habitat, has prime real estate, areas with an ideal amount of sun and shade and nutrients. But one that has been through many disturbances is a changed system. Today, recovering reefs are often just graveyards of coral, dead colonies that once grew in an explosion of colours and intricate forms. But, unlike a forest where destruction is usually associated with a flattening of habitat area, reefs may retain their inherent structure for much longer. The coral might be dead, but its skeleton still persists. Under this altered scenario, the ‘coral reef’ comes to resemble a ghost town of sorts, where there is little live coral but where signs of an earlier vibrancy still linger in washed-out patches of branching coral or in grey tables and massive boulders that still stand erect on a reef. A coral larva that reaches a reef like this has a variety of dead structures to potentially land on. One of the strongest cues that guide them to a habitat is substrate – the stuff that covers the surface of something. In the Lakshadweep, as in many other reefs in the world, surfaces covered in a certain kind of bubblegum-pink alga (called crustose coralline algae) tend to be preferred by coral larvae to other substrates like seaweeds and thick turfs, which are usually avoided.

The fate of this young coral of the genus Acropora depends on a multitude of factors including the resilience of the structure on which it grows. Photo Courtesy: Shreya Yadav

These substrates, however, are not distributed evenly between structures. As a result, coral larvae tend to crowd on to certain kinds of structures more than others, which, in a recovering reef, are primarily the skeletons of older coral. These, too, differ in their stabilities, with some – like massive boulders – much more resistant to breakage and storm damage than others, like dead tabular coral or bits of rubble. Some skeletons, therefore, will ‘live’ longer than others, allowing the coral that has settled on them to also survive for longer. It’s like the underwater version of the Three Little Pigs story: some structures are stronger than others, and coral larvae that settle on forms that are able to withstand the ‘huffs and puffs’ of the monsoon are the ones that are most likely to survive to become adults. What happens, then, if some of the weaker structures are covered in substrates – like crustose coralline algae – that attract coral larvae? In this case, larvae may be making the right choice at the time of settlement, but their final fate is in the hands of the withstanding capacity of the underlying form.

Recovery is not simple

In the Lakshadweep, the five-month long south-west monsoon plays a large part in influencing the kind of structure a reef retains. Are the reefs that are declining, then, the ones that are made up of the most amount of dead unstable structure? In contrast, are areas that are cleaned of all their loose skeletons the ones most likely to support sustained coral growth and recovery? Of course, it is not as simple as this. A host of other factors like the abundance of herbivorous fish and the number of coral larvae that are produced by mature adults are crucial processes for coral reef recovery. 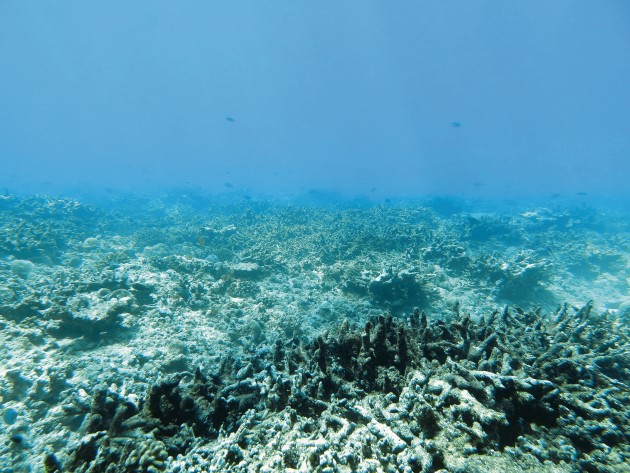 A post-disturbed reef is a graveyard of dead coral skeletons on which new coral can settle and grow. Photo Courtesy: Shreya Yadav 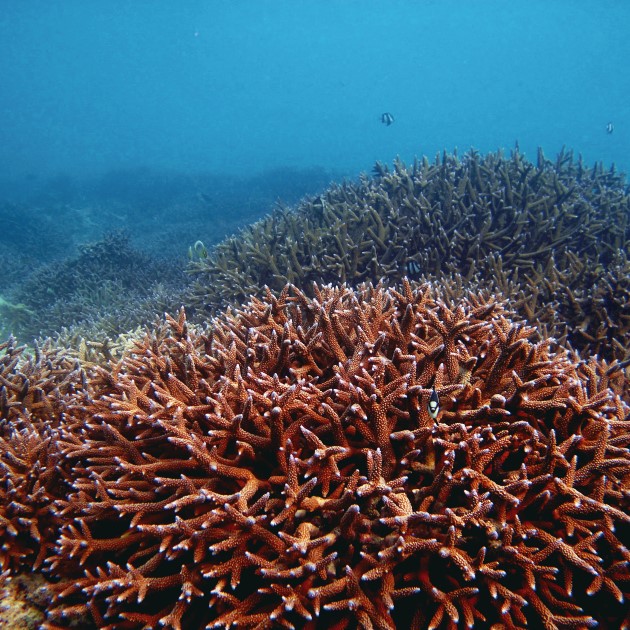 A forest of coral growing in the lagoon. Photo Courtesy: Shreya Yadav

Understanding how the resistance and resilience of a system is maintained can help manage the changes we might see in the near future. With a weakening barrier of coral to fortify the land, the coasts of islands like Kadmat have become more prone to erosion, and its groundwater to salinity. Storms that might have been broken by the reef instead reach land without buffer. Amidst these uncertain destinies, the lives of
pre-Cambrian coral may be able to reveal more about the future than we think.