This document tries to give a picture of the status of various hydropower projects in various sub basins in Uttarakhand, giving a break up of projects at various stages.

Entire Uttarakhand is part of the larger Ganga basin. The Ganga River is a trans-boundary river, shared between India and Bangladesh. The 2,525 kms long river rises in the western Himalayas in the Indian state of Uttarakhand, and flows south and east through the Gangetic Plain of North India into Bangladesh, where it empties into the Bay of Bengal. The Ganga begins at the confluence of the Bhagirathi and Alaknanda rivers and forms what we have called Ganga sub basin till it exits Uttarakhand. Besides Bhagirathi, Alaknanda and Ganga sub basin, other river basins of Uttarakhand include: Yamuna, Ramganga (Western Ramganga is taken as Ramganga basin in this document, eastern Ramganga is considered part of Sharda basin) and Sharda. Sharda sub basin includes eastern Ramganga, Goriganga, Dhauliganga, Kaliganga and part of Mahakali basin. 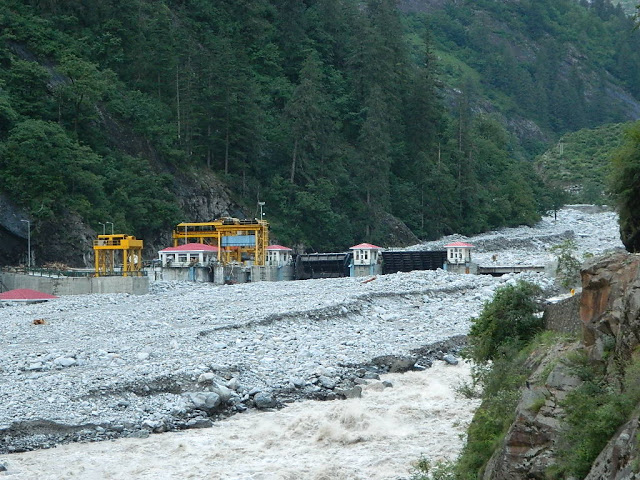 In the table below we have given the sub basin-wise list of existing hydropower projects in Uttarakhand along with their capacities. The list has been prepared based on various sources including Central Electricity Authority, Uttarakhand Jal Vidhyut Nigam (UJVNL), Uttarakhand Renewable Energy Development Authority (UREDA) and Report of Inter Ministerial Group on Ganga basin. 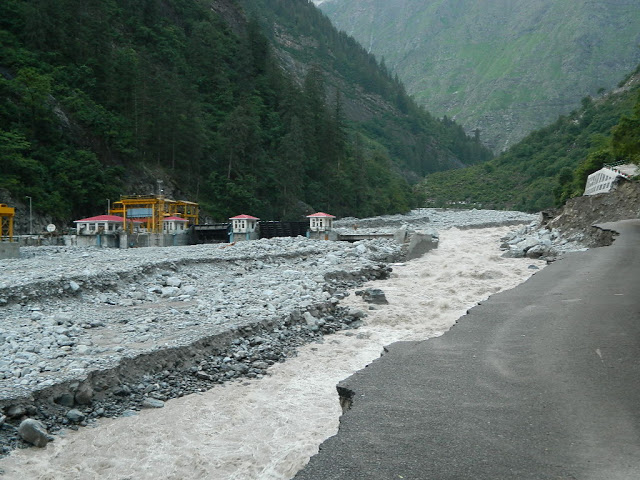 In the next table we have given available list of existing mini and micro hydropower projects in Uttarakhand, based on UREDA information.

From http://ahec.org.in/, capacity of some of the projects is as per the UJVNL website. The capacity comes to 3.815 MW for the 41 projects for which capacity is available. Based on above two tables, in the following table we have provided an overview of operating hydropower projects and their capacity, with basin wise and size wise break up.

Uttarakhand has total of 86 existing hydropower projects, with total installed capacity of close to 3600 MW. At least eleven of these projects are in private sector with total capacity of over 503 MW. An additional about 1800 MW capacity is in central sector. It means that majority of the power generation capacity in the state is not owned by the state and there is no guarantee how much of that power would be available to the state.

Here we should note that as per the Union Ministry of New and Renewable  Energy sources, in Uttarakhand, by March 2013, 98 small hydro schemes has been installed with total capacity of 170.82 MW. If we add the small and mini-micro projects in above table, we have 83 operating schemes with installed capacity of 172.315 MW. This mis-match is not possible to resolve since MNRE does not provide full list of operating SHPs in Uttarakhand.

Under Construction Hydropower projects in Uttarakhand 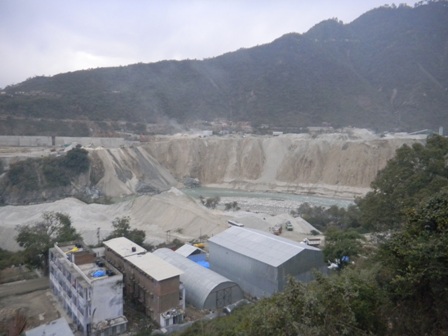 Note: Projects like Loharinag Pala, Pala Maneri, Bhairoghati and other projects along Bhagirathi upstream of Uttarkashi along the Eco Sensitive zone have been dropped from this list. Rest of the list is from the IMG report or from UJVNL website. P in the bracket indicates the project is in the private sector. ADB in the bracket indicates that the project is funded by the Asian Development Bank.

In following tables we have provided available list of proposed hydropower projects in the Alaknanda, Bhagirathi, Yamuna, Sharda and Ramganga basins in Uttarakhand. The list is likely to be longer than the list in these tables since full and upto-date information is not available. Also there are different agencies  involved in proposing, sanctioning and executing these projects and there is no single agency which can provide comprehensive picture of what is happening in the basin. However, even this available list is frightening.

Note: EAC: Expert Appraisal Committee of MoEF; FAC: Forest Advisory Committee of MoEF; EC: Environment Clearance: FC: Forest Clearance; TOR: Terms of Reference (of EIA); for Alaknanda, the first 17 projects are listed as given in IMG report and for Bhagirathi first 8 projects are as listed in IMG report. However, many of these projects have been recommended to be dropped by the WII (Wildlife Institute of India) report. Also, IMG and other have said that no further projects should be taken up in Bhagirathi and Alaknanda basins. The projects listed above in the Bhagirathi basin beyond serial number 8 and those in Alaknanda basin beyond 17 would, in any case, not be taken up.

In the table below we have provided and overview of proposed hydropower projects in Uttarakhand based on the information from above five tables.

Overview of hydropower projects in Uttarakhand

In the table below we have put together the number and capacities of existing, under construction and proposed hydropower projects in various basins of Uttarakhand. Uttarakhand government has plans to have total of 337 hydropower projects with total capacity of 27191.89 MW. Largest number (124) of such projects are in Alaknanda basin, the largest capacity is proposed to be in Sharda basin at 12450.905 MW.

In the table below we have given basin wise figures of total large, small and mini-micro hydropower proejcts (including existing, under construction and proposed) projects in Uttarakhand. According to Union Ministry of New and  Renewable energy, total potential of small hydro  in Uttarakhand is 1707.87 MW from 448 small hydro projects. If we take that into account the figures in the following tabes would change (go up) accordingly.

In the table below we have given basin wise figures of existing, under construction and proposed hydropower projects of all sizes in Uttarakhand.

Overview of all Hydropower projects in Uttarakhand

Basin Maps Maps of Hydroelectric Projects in various sub basins of Uttarakhand are available at the following links. Please note that the maps are based on information available when the maps were created in 2011

How do the hydropower projects increase the scale of disaster?

This is a question that a lot of journalists and TV anchors have been asking me since the Uttarakhand disaster. Here is a quick response:

Þ     Almost all hydropower projects of Uttarakhand involve deforestation. Deforestation directly increases the potential of erosion, landslides and floods since water now just runs off to the rivers. Moreover the compensatory afforestation and catchment area treatment, even when done, usually involves planting of commercially important variety of trees like pine and teak and not broad leaf tress like oaks which not only adds humus in the soil, but also allows rich under growth. Pine does not allow this to happen. This change in character of forests is something Gandhiji’s disciple Mira Behen has been warning since independence, but there is little impact of this on the forest department.

Þ     In fact largest proportion of deforestation in Uttarakhand has happened basically for hydropower projects.

Þ     All run of the river projects involve building of a dam, diversion structure, desilting mechanism, tunnels which could have length of 5 to 30 km and width sufficient to carry three trains side by side, as also roads, townships, mining, among other components. All of these components increase the disaster potential of the area in one or the other way. Cumulative impacts of all the components of any one project and all projects together  in a given basin is likely to be larger than the addition of the impacts of individual projects in many cases.

Þ     Massive blasting of massive proportions is involved in construction of all these components, which adds to landslide risks. In fact Uttarakhand’s Disaster Mitigation and Management Centre in their report of Oct 2012 after the Okhimath disaster of Sept 2012 recommended that no blasting should be allowed for any development activity anywhere in Uttarakhand, but Uttarakhand government did nothing about this recommendation.

Þ     The massive tunneling by itself weakens the young and fragile Himalayan mountains, increasing the disaster potential.

Þ     Each of the hydropower project generates immense amount of muck in tunneling, blasting and other activities. A large hydropower project could typically generate millions of cubic meters of muck. The large projects are supposed to have muck disposal plan, with land acquired for muck disposal, transportation of muck to the designated sites above the High Flood levels, creation of safety walls and stabilization process. But all this involves costs. The project developers and their contractors find it easier to dump this muck straight into the nearby rivers. In the current floods, this illegally dumped muck created massive disaster in downstream areas in case of 330 MW Srinagar HEP, the 76 MW Phata Byung HEP and the 99 MW Singoli Bhatwari HEP. When the flooded rivers carry this muck, boulders and other debris, has much greater erosion capacity and also leaves behind massive heaps of this muck in the flooded area. In Srinagar town about 100 houses are buried in 10-30 feet depth of muck. Such debris laden rivers also create massive landslides along the banks. 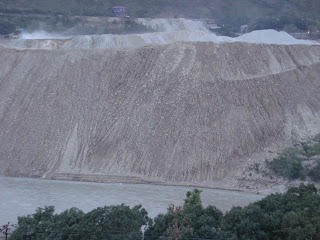 Þ     Wrong operation of hydropower projects can also create greater disasters in the downstream areas. For example the operators of 400 MW Vishnuprayag HEP on Alaknanda river did not open the gates when the river was flooded on June 16-17, possibly to maximize power generation. However, this lead to accumulation of massive quantities of boulders (for photos of dam filled with such boulders see: http://matuganga.blogspot.in/) behind the dam, so much so that that there was no space for water to flow. The river then bypassed the dam and started flowing by the side of the dam, creating a new path for its flow. This created a sudden flashflood in the downstream area, creating a new disaster there. 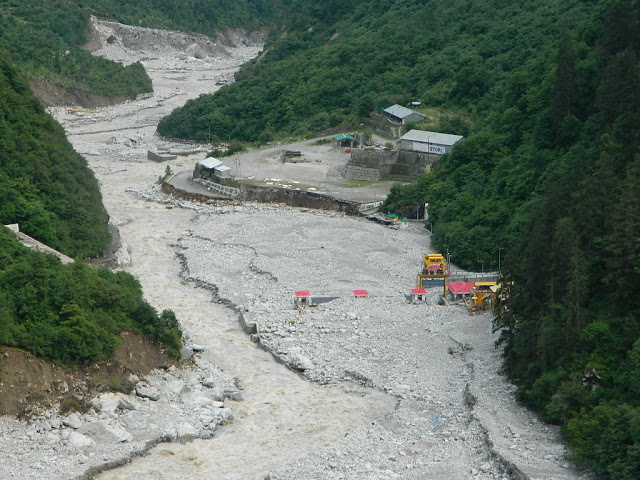 Þ     The incomplete, broken and ill designed protection wall of the Maneri Bhali projects in Uttarkashi lead to erosion and landslides in the downstream areas.

It has been now reported in Business Standard that the 330 MW Srinagar project, a cause for downstream destruction, has itself suffered massive damages on June 17, 2013, with breach of its protective embankment. The report also mentions the damage to the L&T’s Singoli Bhatwari HEP on Mandakini river.

In addition, a large  number of projects had to stop generation temporarily due to high silt content, including Maneri Bhali I and II, Tanakpur, Dhauli Ganga, Kali Ganga I, some of the Yamuna basin projects among others.

Unless we address all of the above issues in a credible way, there is little wisdom in going ahead with more hydropower projects in Uttarakhand. They will invite greater disasters. Uttarakhand has many other options for development.

Going ahead with more hydropower projects in current situation would be invitation to greater disasters. In fact, the Uttarakhand government should not allow even the damaged and under construction hydropower projects until al the conditions mentioned above are satisfied.

Some of the hydropower projects that have surely seem to have added to the disaster proportions of current Uttarakhand flood disaster include the 400 MW Vishnuprayag HEP, the 280 MW Dhauliganga HEP, the 330 MW Shrinagar HEP, the 304 and 90 MW Maneribhali II and I HEPs, the 99 MW Singoli Bhatwari HEP and the 76 MW Phata Byung HEP, the last two on Mandakini river.

In response to my question on a programme on Headlinestoday channel anchored by Rahul Kanwal on July 8, 2013 (in presence of panel that also included Dr Vandana Shiva and Vimlendu Jha), the Uttarakhand Chief Minister Shri Vijay Bahuguna agreed that he will institute an enquiry into the damage due to these hydropower projects and hold them accountable for such damage.

Let us see how soon and how independent and credible enquiry he institutes.

5. http://ureda.uk.gov.in/pages/show/130-micro-hydro-programme and other sites of UREDA.