The land of dawn-lit mountains, Arunachal Pradesh has continued to draw me ever since my first visit in 2005. And I found myself in this avian El Dorado once more, when the second COVID-19 wave struck.

In the first week of April 2021, I received news that a White-bellied Heron Ardea insignis, a species I had studied earlier, had been sighted at Walong in the Anjaw district. I ignored the news as I had recently read that except for the Namdapha Tiger Reserve, the herons had never been sighted in Arunachal Pradesh. A week later, the buzz on sightings grew and reports began to emerge from sources I trusted. If true, I figured, this would be a new distributional record for the White-bellied Heron from India, because earlier reports came only from Manas in Assam and Namdapha. What’s more, the information I received was that a pair was nesting! This was enough to prompt the Arunachal Forest Department to constitute a fact-finding committee to confirm the sightings and a joint research team from the Zoological Survey of India (ZSI) and the Wildlife Institute of India (WII) was formed.

I was understandably delighted when a letter to be part of the team from the PCCF arrived on April 23, 2021. The pandemic, of course, made travel a challenge. I chose to travel by road from Kolkata with my colleague Amitava Majumder, a birder and excellent wildlife photographer. We set out on May 10 and drove 1,800 km., virtually non-stop, to reach Tezu on May 12. After meeting the Divisional Forest Officer Santosh Kumar Reddy there, we proceeded to Walong, which involved another eight-hour, 220 km. journey.

The next morning, Ashesh, a Forest Department staffer, was deputed to accompany us to the site where the White-bellied Herons had indeed constructed their nest, on a 40 m. tall chir pine Pinus roxburghii tree, some 10 m. from the east bank of the Lohit river. Unwilling to disturb the birds, we peered through our scopes from a distance of 180 m. The nest had been constructed on the extreme end of a long branch, just above the halfway mark of the tree trunk.

For the four days we were there, the area experienced moderate to heavy rainfall and we were able to spot one of the adult birds incubating its egg(s).  The nesting site, at an altitude of 1,120 masl. was considerably higher than the one at Namdapha, where the herons were observed away from the hills and the Noa-Dihing river at an altitude of just 390 masl. Unlike Walong, the heron’s habitat there was dominated by secondary forests, and no nearby pine trees (See Noa-Dihing’s White-bellied Herons, Sanctuary Asia Vol. 34, No. 8, August 2014). The nesting of the herons in Walong was particularly significant, as few breeding pairs have been located globally and the one we were at was far (85 km. aerially) from the Namdapha nest, and separated by tall mountain ranges. I believe the pair may have made their way from the neighbouring Tibet Autonomous Region (TAR) of China, from where the Lohit river originates. Google Earth images suggest that there are suitable habitats in southwestern China, bordering India, and given the region’s remoteness, these probably escaped the attention of birders.

Strong trans-boundary cooperation between India, Myanmar and China could reveal more herons, but in low numbers since we have no evidence of major adult populations capable of producing young that would disperse to new territories. But the sighting was beyond significant and there was a distinct possibility of more birds in nearby areas. Hopefully, extensive surveys will now be launched to establish population, status and distribution of these rare and elusive avians from this remote, obscure Eastern Himalayan landscape.

We urged the Arunachal Forest Department to protect the nesting and foraging site with help from other agencies, to prevent the hunting of birds. Groups of young men with airguns and catapults are a common sight in Walong. 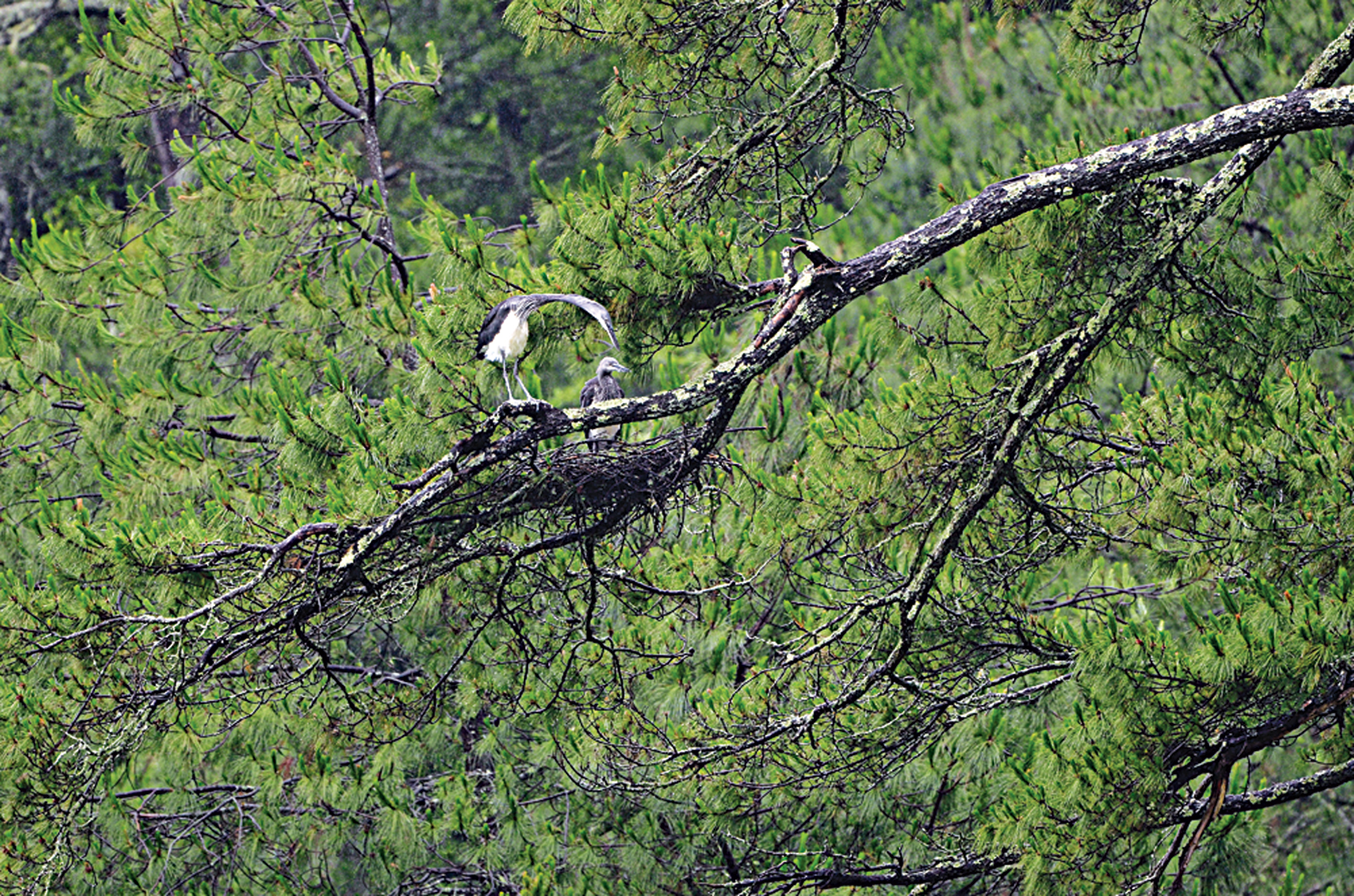 A pair of herons nesting on a pine tree Pinus roxburghii in Walong. This is a record observation, as herons (in Namdapha) were previously only observed nesting on Terminalia myriocarpa trees. The image was captured from a safe distance, to avoid disturbing the birds. Photo: Gopinathan Maheswaran.

The mountains of Walong and the surrounding areas are part of the Dichu Reserve Forest, a designated Important Bird Area (IBA). Over 250 bird species have been reported from here, including the Spot-breasted Parrotbill, Derbyan Parakeet, Godliewski’s Bunting, Chestnut-eared Bunting and a sub-species of the Koklas Pheasant Pucrasia macrolopha meyeri – testimony to the diversity of this region and the flora upon which the birds and their food chain are umbilically linked.

Birding along the gushing white waters of the meandering Lohit river is a treat! Taking some time out from heron watching, we decided to go out in search of forest birds. Setting out from Walong at 8 a.m. on May 16, we reached the army post at Helmet Top around 11:30 a.m., stopping frequently to scan the area for birds. Interestingly, the area was christened Helmet Top (2,090 masl.) when post the 1962 war with China, locals discovered helmets and boots strewn around, without a trace of any uniformed men. Walong supports very high biodiversity, and the Ditchu RF sits at the tri-junction of India, Myanmar and China.

The 17 km. steep stretch from Walong to Helmet Top has zero human habitation, possibly because of the steep incline of 1,000 masl. Along the way we found the Derbyan Parakeet only at one stretch during our entire survey. But it is a difficult species to photograph, given its preference for roosting on the uppermost pine branches. The region may also have Black Partridges. On May 17, standing outside the Walong Inspection Bungalow, at around 5.15 a.m., I heard the partridges calling from the higher reaches of the mountain slope west of the Inspection Bungalow where we had camped. I knew the call from my work in the Terai grasslands of Dudwa and Jaldapara, where the species is common. But a positive identification is needed since Black Partridges are known to generally prefer lower-elevation grasslands.

The next day, we set off toward the Kibuthu village on the Indian side, on the last motorable road before the Line of Actual Control (LAC), separating India from the Tibetan Autonomous Region. The 30 km. stretch from Walong was no different to the adjoining areas, except that it rose gently and was moderately open and dotted with villages and farms. Though dominated by military camps and army personnel, silence ruled – the only sound we heard was the gush of the fast-flowing Lohit river. Stopping awhile, we observed short to medium-sized patches of grassland that supported a variety of birds, including Spot-breasted Parrotbills, especially at Yakung. In India, this is the only place where the bird is possible to spot, apart from a few isolated places in Manipur. This could also partly be because of the skulking nature of the species. 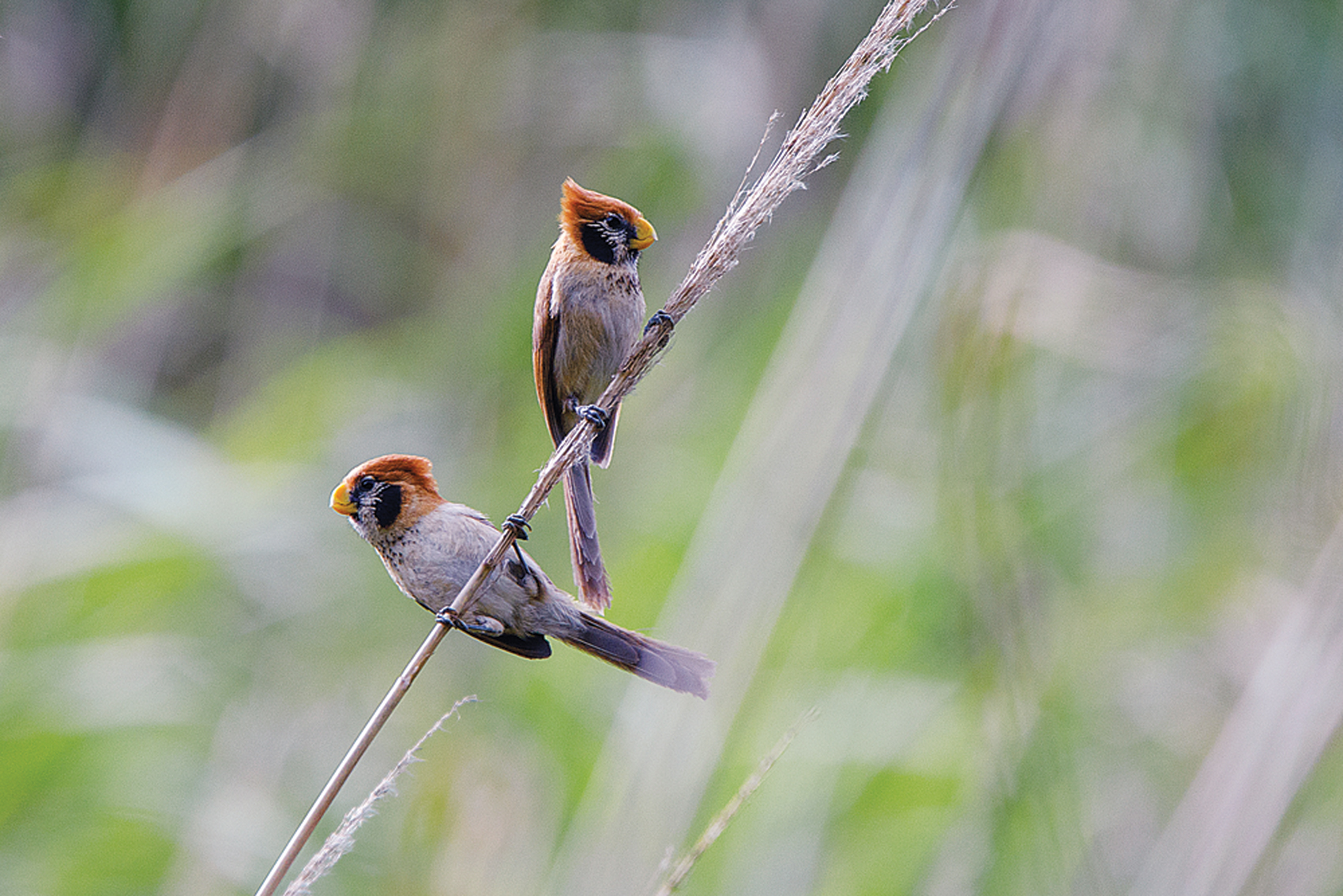 The IBCN is a network of birdwatchers and NGOs working for avian conservation. The IBCN is housed at the Bombay Natural History Society, Mumbai. IBCN members comprise organisations and individuals. Organisations are usually nature groups that work at specific Important Bird Areas (IBAs) or a network of several IBAs. The IBA Programme of BirdLife International aims to identify, monitor and protect a global network of IBAs. IBAs are key sites for conservation – small enough to be conserved in their entirety and often already part of a Protected Area network.

Walong remained largely out of bounds for outsiders for most of its history with limited ‘developmental’ activities. The Brahmaputra and Lohit rivers served as natural barriers. Anyone wishing to reach Walong had to cross these two rivers near Tinsukia in Assam and Roing in Arunachal Pradesh. Until recently one had to use a ferry from Sadiya Ghat in Assam to cross over. Now, multiple bridges over these rivers have made the journey easier. However, other than the odd birder or two, few visit the region and virtually no one visits in winter. Nevertheless, a few homestays have been set up by locals at Walong and Dong. The only mobile network operated by BSNL for the entire region is located within an army camp at Walong, where locals can often be seen nearby trying to access a signal.

During the monsoon (May to mid-September), multiple landslides cut the region off from its surroundings. We ourselves were stuck for over 24 hours between Yasung and Tezu!

That said, the lack of logistics is a blessing for the biodiversity of the area. Where humans congregate, birds tend to vanish! But Arunachal Pradesh has never failed me – it’s concealed avian diversity has always blessed me with sightings and this time, I was particularly grateful that despite the pandemic, I was able to spend time with the avians of Walong. 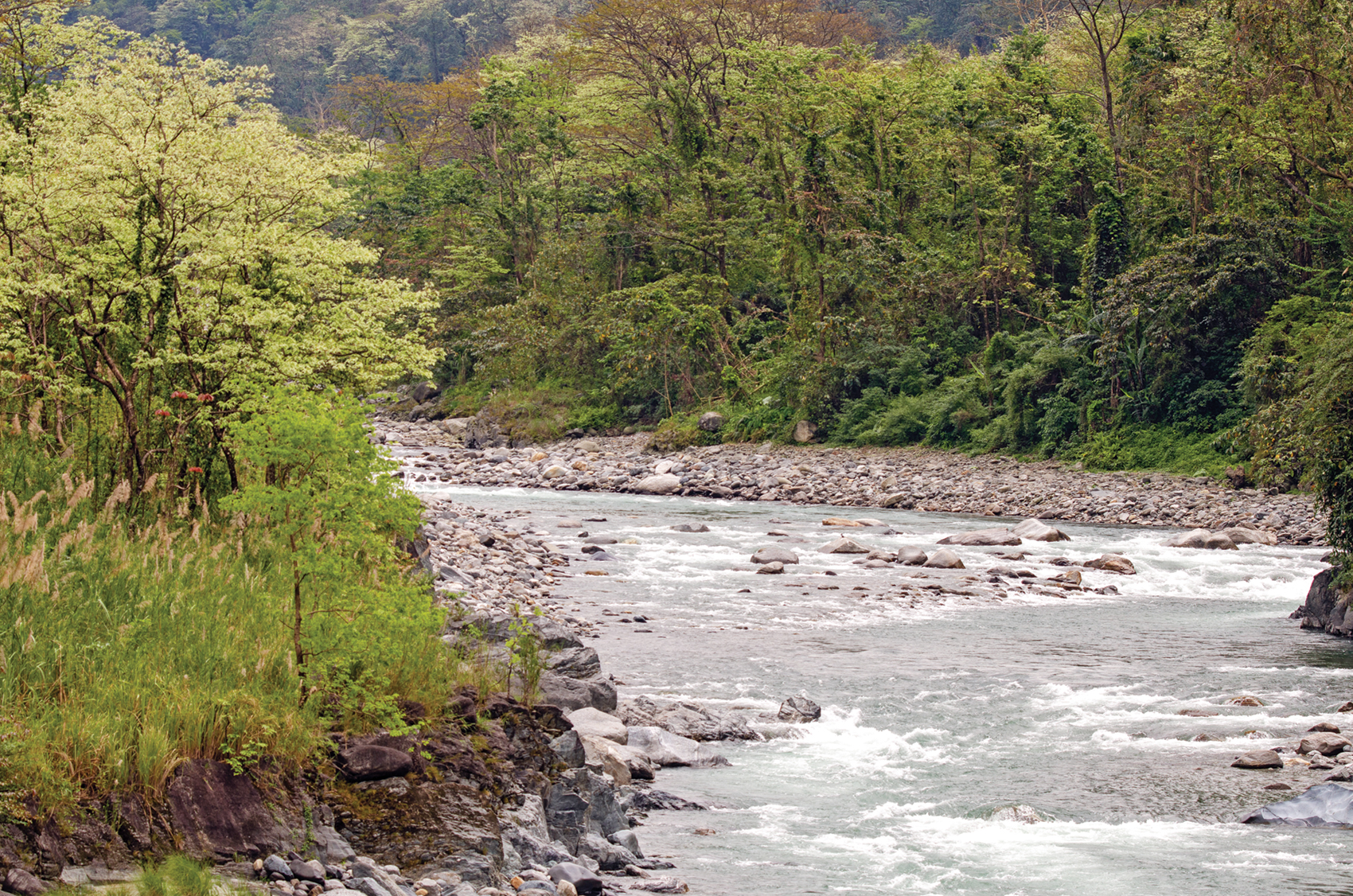 The glistening rivers that feed the rich landscape of Walong make for a wistful frame. The connected forests are recognised as an ‘Important Bird Area’ by the Bombay Natural History Society and BirdLife International. Protection of this area strengthens support for threatened endemics such as the Mishmi takin Budorcas taxicolor. Photo: Saurabh Sawant. 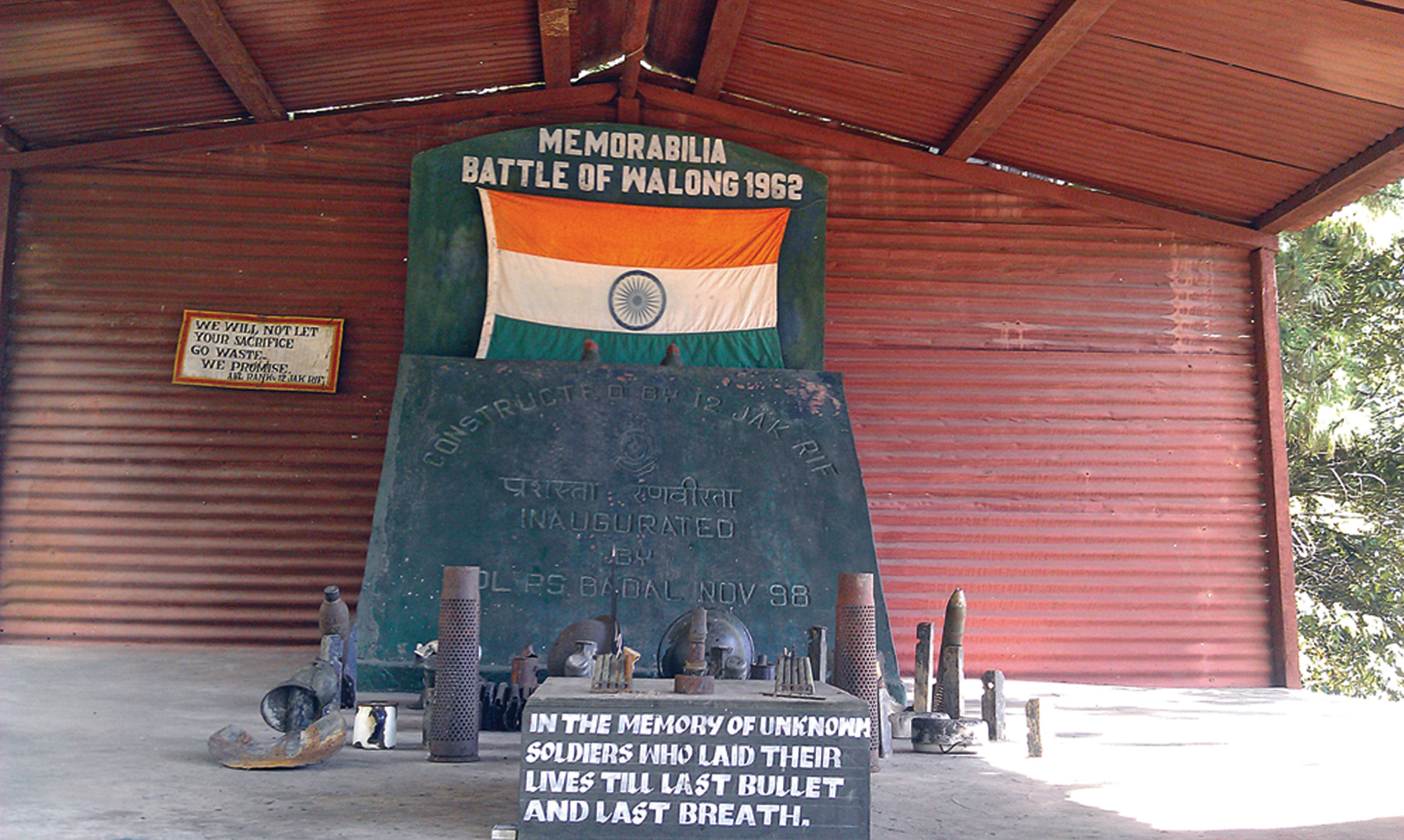 Walong, not well-known to most, played a significant role in the 1962 Indo-China war. According to literature available, the ‘Battle of Walong’ was one of the fiercest between the world’s two most populous countries. For over a month, night after night, the sky was lit up by mortars and shells exchanged between the two powerful armies. Even today War memorials can be seen scattered across the region, even as the rejuvenated mountains and rivers attempt to conceal long gone battle scars.
The IUCN WCPA (World Commission on Protected Areas) Transboundary Conservation Specialist Group

This Group works towards cooperative and effective conservation of ecosystems across international borders. Comprising over 250 members from diverse fields and specialities, the focus is to not allow different management and political governances to impact conservation goals. Four types of Transboundary Conservation Areas are recognised by the WCPA – a Transboundary Protected Area, a defined geographical region across two countries; a Transboundary Conservation Landscape and/or Seascape, which has both Protected Areas and multiple resource use areas; Transboundary Migration Conservation Areas, habitats needed for migratory species; and a special designation called A Park for Peace, applicable to any of the above three types for special peaceful cooperation between countries.

Several such transboundary conservation initiatives are in the works across the world – some informal agreements, some MoUs between governments. The transboundary region between the Tibet Autonomous Region of China and the adjacent mountain habitat of India and Nepal, for instance, is a culturally and ecologically diverse and fragile region. This mountain habitat is home to several specialist species such as chiru, Tibetan wolves, and snow leopards, which move across national boundaries. A consolidated conservation, management and monitoring framework between countries is thus a necessity.

Gopinathan Maheswaran is an ornithologist, he is presently working with the Zoological Survey of India. His research focus is on long-legged wading birds, especially storks and herons of Northeast India and the reclusive hispid hare.