In the summer of 2018, while conducting a community children’s awareness programme at the Last Wilderness Foundation, I met a guest at a local dhaba in Tala village, Bandhavgarh, who remarked, “Oh! I did not know there were villages around the reserve”. That is when it occurred to us that barring the people directly connected to our projects at the foundation, few knew about the communities, culture, tradition or the challenges that existed in this forest landscape. Thus began our quest to create awareness among people visiting tiger reserves, about locals and their lives.

The first activity we curated was with community members of Gata, Ghaghud and Damna, located on the fringes of and within the Bandhavgarh Tiger Reserve. The close proximity between humans and wildlife often led to conflicts in the region ranging from entry into the forest for fuelwood and other non-timber produce to wildlife destroying crops. On one of our routine visits to Gata, when speaking with the elders, we learned of a traditional dance, integral to the community – the ‘Karma Saila’ dance, performed mainly by the Gond community while celebrating festivals and special occasions.

As night fell, more community members joined in the discussion. Soon, a small group of people performed the dance, ending with a human pyramid as the final act. It was absolutely spellbinding. A group of around 11 people agreed to form a formal group and since then, they have been performing and interpreting its meaning for guests. Often, most guests end up dancing themselves, swaying to the haunting beats of the maandar or the local drum, played to perfection by their talented group leader Ram Avtaar. 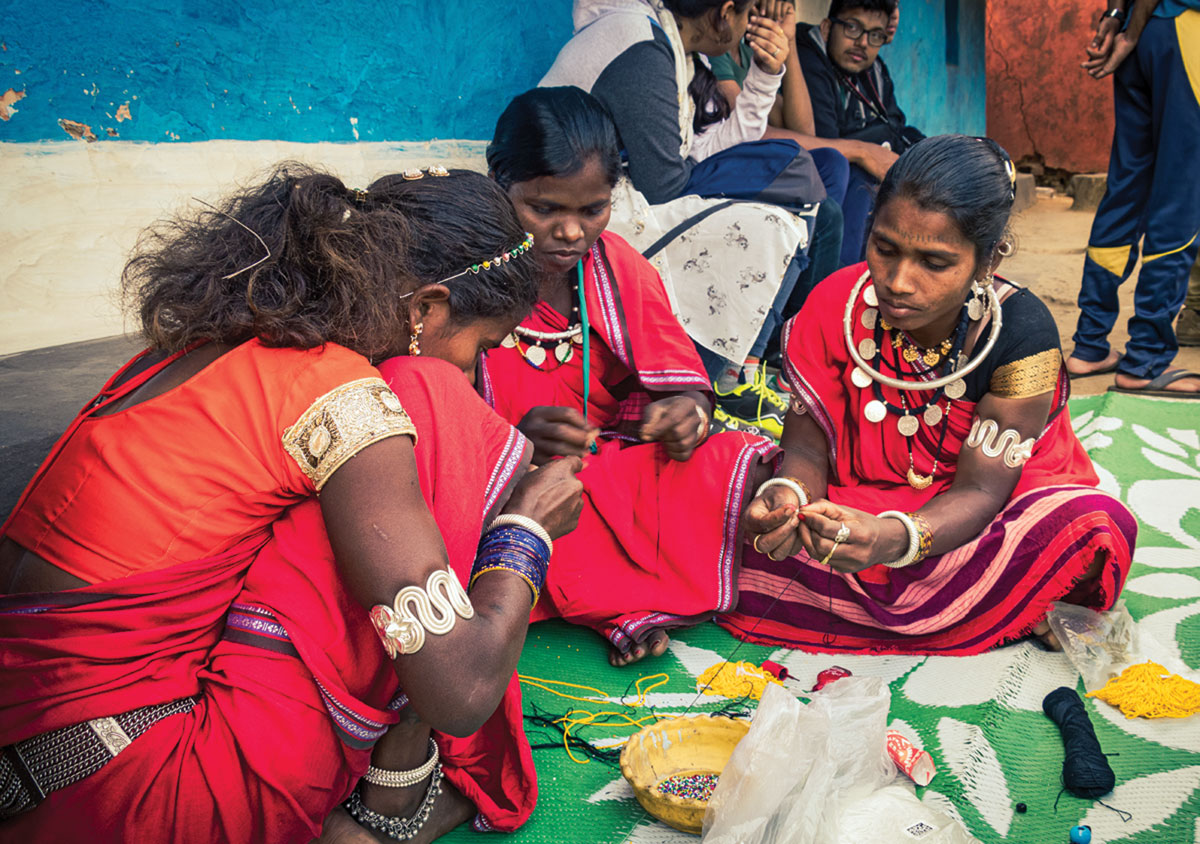 Baiga artists at work crafting jewellery for sale. Such initiatives have reduced their dependence on the forest, while greatly enhancing the independence of women. This is also a way of
preserving and promoting their unique culture. Photo: ITravel Journeys/LWF.

A few months later, during the summer, when we were driving towards Gata to see the tribal dance group, our vehicle was hailed by a slender lady dressed in red, her stance purposeful. She beckoned me to follow her, while her nine-year-old son Laxman skipped ahead of us. “Ma ne aaaj kheer banayi hai,” he informed us (Mother has made rice pudding today). Confused but intrigued, we followed them to their house where a beautiful setup greeted us: rugs nearly arranged on the mud floor along with little bowls full of simmering kheer.

As we took our shoes off and settled down for the treat, Meena Singh finally spoke, her bangles catching the golden afternoon light and a shy smile lighting up her eyes. “Main chahti hoon, jaise log nach dekhne aate hain, woh mere ghar ka khana bhi khayein.” (I want people to visit my house for food, as they do for the dance in the village). “Isse hume aamdani bhi milegi, aur log hamare bare mein jaan bhi payenge.” (This way we will earn an income and people will get to know about us as well.) Well satiated after two bowls of kheer and heartened by the proposition, we decided to include ethnic cuisine at Meena’s house as part of the dance tour. People could choose whether they want to indulge in the dance or just a hearty meal, or even both. We are happy that visitors are enjoying local fresh cuisine and culture and spending time in the company of community members to understand how they share their backyard with wildlife. 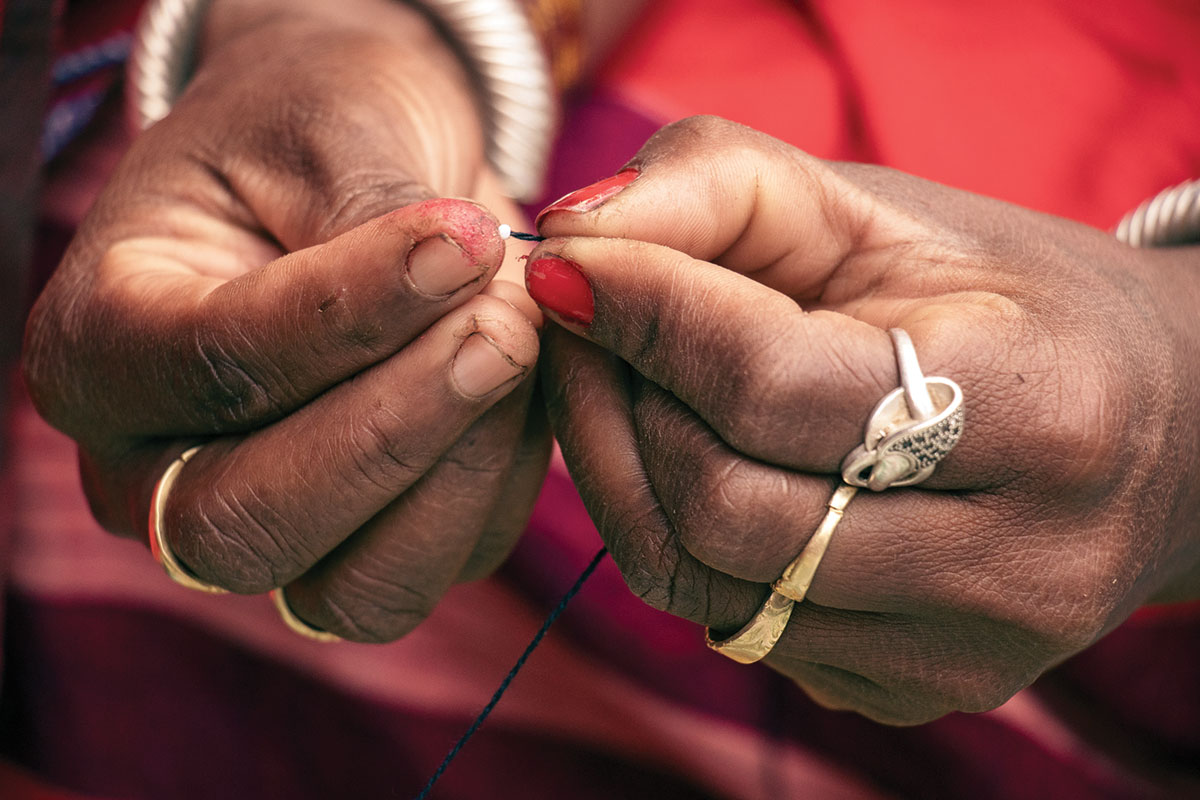 Jewellery making is an intricate process, as can be seen in this image from a Baiga jewellery workshop. The community’s colourful jewellery is generally worn during special occasions and festivities like weddings. Photo: ITravel Journeys/LWF.

A few years earlier, in 2017, the Forest Department at Kanha invited us to work with the Baiga community living around the tiger reserve, and who were still significantly dependant on the forest for their livelihood. After several cups of chai and walking around the scenic village of Bandha Tola, we met an old grandmother, a mataraam of the village. We sat down to speak with her, and noticed a stunning necklace around her neck. A thick, black thread, complete with 14 silver coins. I asked her about it and she responded matter of factly, “Hamou banai hain.” (I have made this).

It took us almost a year to kickstart a Baiga jewellery initiative; community members were convinced that no one would want to wear tribal jewellery, especially one made by a Baiga. After the successful sale of the first batch of jewellery, which was popular not only in India but overseas as well, more and more women joined in. The initiative was expertly led by a local Baiga teacher, Sunita Marawi, who brought in women from her village and other neighbouring areas until we had a workforce of almost 40 women across four villages.

Such was the response to the jewellery that when orders came in, even the men joined in to help the women. But even then, somehow, I felt that just selling the jewellery was not enough. We needed to develop a personal touch, people should know and appreciate the intricacies of making a single bracelet or a necklace. We approached several resorts to host a Baiga jewellery workshop. This not only allowed the guests to experience the fine art of jewellery making but also gave them an insight into the extremely shy Baiga community. Community members also gained confidence knowing that people are interested in meeting them and taking a slice of their culture back with them. Such interactions have also helped strengthen the bonds between the community and visitors and us.

Ethnic home-cooked cuisine is a highlight on trips, and eating at a villager’s kitchen allows travellers to truly understand their culture and way of life. This also introduces people to indigenous varieties of grains, vegetables and recipes. Photo: Aron Klein/LWF. 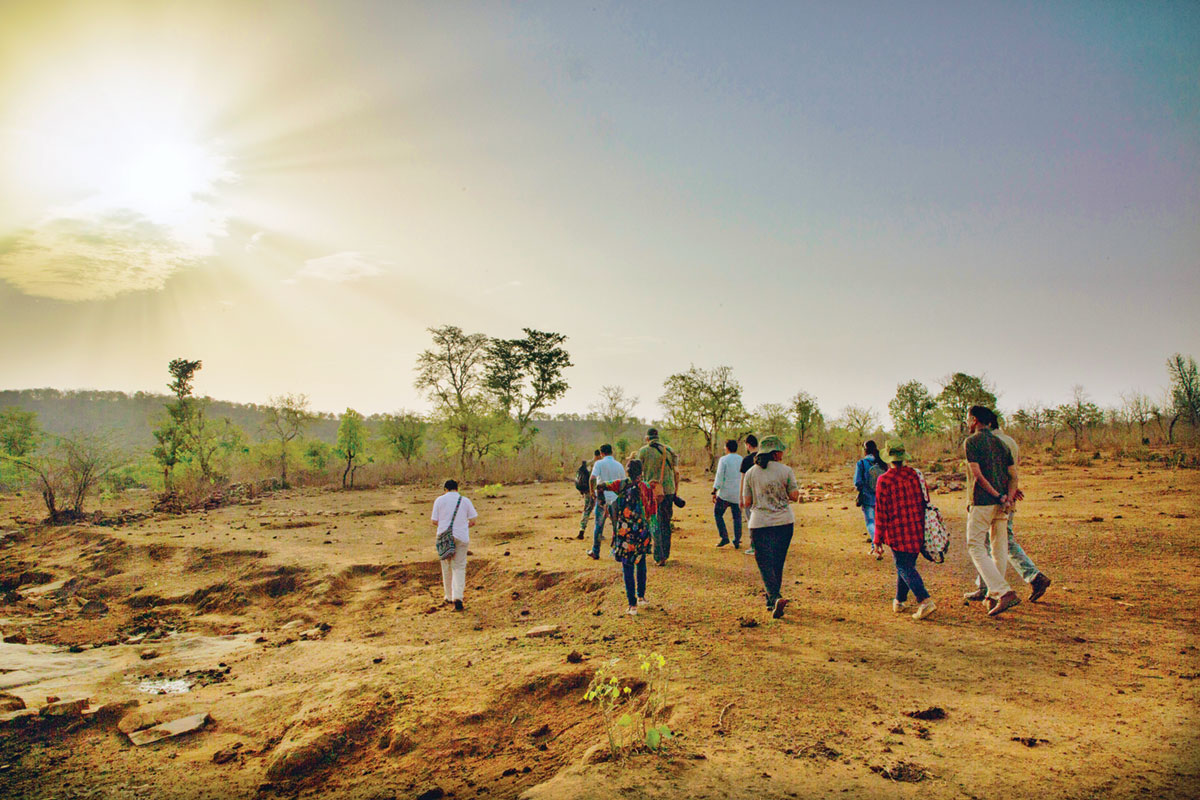 Tourists experiencing the forest by walking with Pardhi guides in the Panna Tiger Reserve. The Pardhi tribe, along with 150 other tribes, were labelled ‘Criminal Tribes’ – a pejorative descriptor for those who rebelled against the British in 1871. The unjust Act, which instated this label, was finally repealed in 1952; they are now officially known as ‘Denotified Tribes’. Photo: Kedar Bhide

Another community that we have been associated with for a long time is the Pardhi. The first year of our formally working with the community was in 2015, wherein we equipped students studying in the Pardhi hostels (set up by the Forest Department in association with Sarva Shiksha Abhiyan) with skills of stitching and electric repair work via the ‘Unnati’ programme. Following the success of this programme, we continued working with the students by providing them financial support (by joining hands with individual donors and corporate sponsors) for the higher education of students beyond class 8th. Thanks to this support, five Pardhi students have completed their graduation (the first line of Pardhi graduates) and have motivated many more students to continue their education. In 2018, while we were in discussion with the community under a silk cotton or semal tree, one of the fathers piped up, “Bachon ka toh theek hai madamji, lekin hum badon ka kya? Humko bhi toh kuch karna hai!” (The children are being looked after by you, but what about the adults? Even we need help). We asked him what he had in mind and he immediately replied, “Humein ghoomna pasand hai, hum logon ko bhi ghooma sakte hain.” (We like walking around and exploring, we can take guests for a walk too). This idea has blossomed into one of the most loved eco-tourism activities in Panna – walks with the Pardhis. Through this walk, the Pardhis’ traditional knowledge of the forests and animals could be channelled to visitors making a foray into the wilderness. The only challenge we felt was that our cohort of wild wanderers needed support with fine-tuning their guiding techniques, which would help them lead the walks.

Taj Safaris played a pivotal role in helping develop the walk into a functioning model. Their dedicated team of naturalists and management trained members of the Pardhi community in guiding and in hospitality. Today, the Pardhi guides (a mixture of both boys and girls) have enthralled close to 2,000 guests from within and outside India, with their phenomenal skills of tracking and animal-sound mimicry.

But the most significant change is the visitors’ attitude towards the Pardhis. I remember a particular incident when a guest had enquired whether it was safe to go alone on a walk with them. “They are dangerous people I have heard, will I be safe?” I assured her that she would be, but allowed her to decide whether she wanted to go with the tribe on a walk or not. After two hours, she called me to excitedly share in an ecstatic babble of words, how wonderful the walk had been. 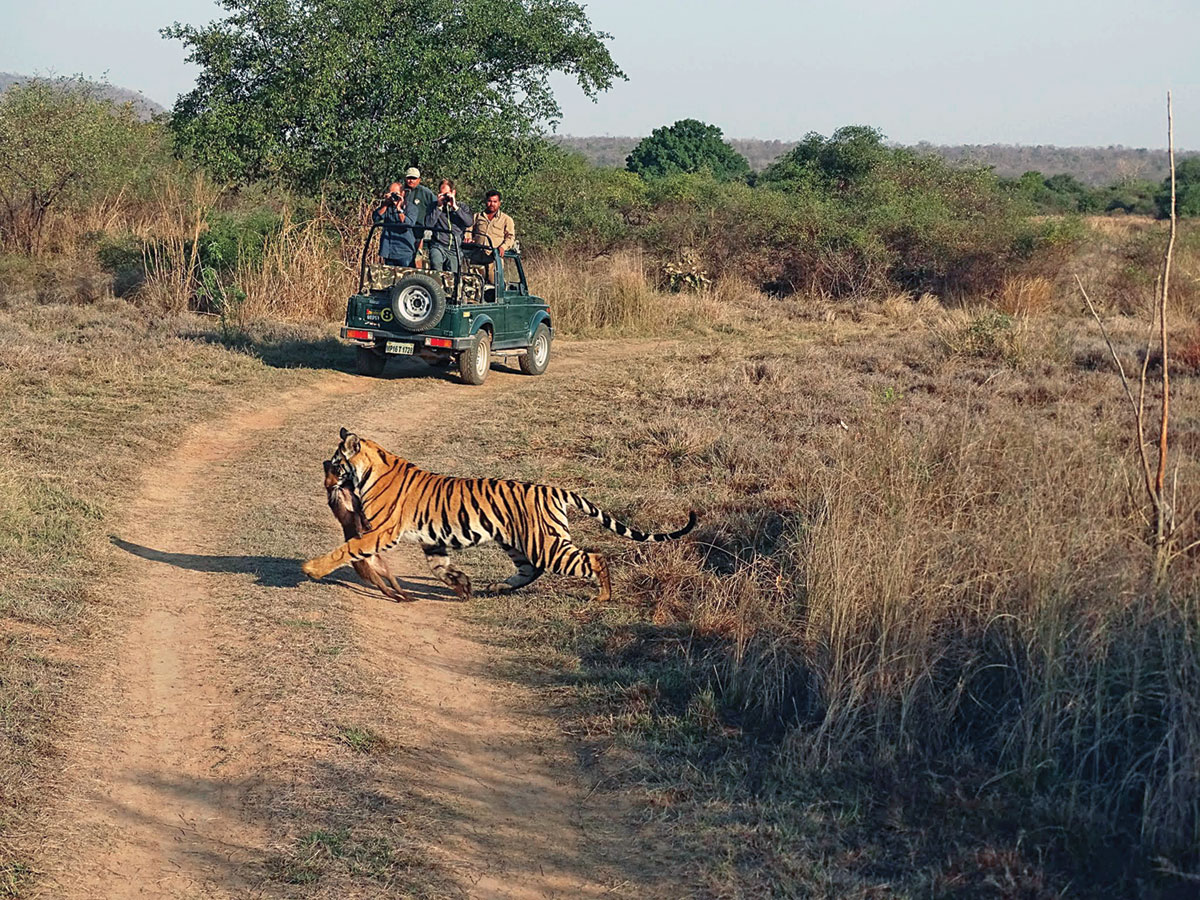 Tourists enjoy a rare sighting of a tiger carrying away a wild piglet in the Panna Tiger Reserve. The wilderness experience is enhanced, and conservation imperatives better understood when visitors have an opportunity to see how locals live in close proximity to wildlife. Photo: R.P. Omre/Sanctuary Photolibrary.

“We even heard a leopard calling back to us when the Pardhis imitated it! I am so glad I missed a tiger safari for this!” she exclaimed. Thrilled by her experience, the guest proceeded to send many of her friends on this walk too.

Such experiences not only help create awareness and reduce stigma about community members but also encourage other community members to lead such activities. One such village is Ranipur in Panna, adjoining the Pardhi establishment. Once community members from the village heard of guests coming in, they came forward with the proposition of activities in their village, which led to the initiation of village walks and ethnic cuisine in Ranipur too. Today, after or before the walk, guests enjoy poha, chai, roti with amla ki chutney, with a view of the beautiful 500-year-old Radha Krishna temple village for company. Here too, in the village of Ranipur, Taj Safaris played an important role in helping train the women in the village on serving food and diversifying the types of dishes.

In 2021, following the success of the ‘Walk with the Pardhis’ initiative, we joined hands with Jehan Numa Wilderness who are pioneers in camping and other outdoor experiences. The idea was to strengthen the protection of the landscape by involving more members or families from the Pardhi community in camping activities as a means of livelihood, while giving visitors an insight into how this nomadic community lived before joining mainstream society via their songs and stories and transition from being hunters to forest protectors. All of this and more while sitting under a canopy of stars in the unpolluted Panna sky.