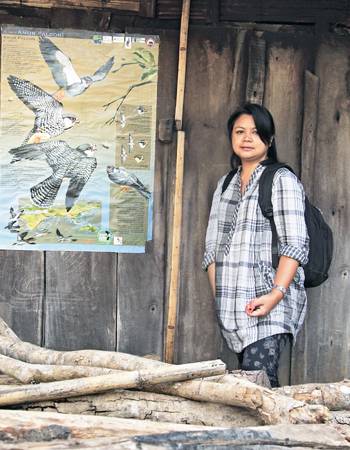 I first met Bano Haralu, a pioneering award-winning television journalist from Northeast India during the infamous cyclone Aila. We became friends, and she invited some of us to visit Nagaland, a part of the world we had only dreamt about. A few of us went, not once but several times, and at the behest of the Government of Nagaland conducted a wildlife survey for the Forest Department leading to the publication of the book Birds of Nagaland authored by Sumit Sen, Ramki Sreenivasan and myself.

After two decades of working with both state and private broadcast media, namely Doordarshan and New Delhi Television, Bano returned to her home state in 2010 and set up the Nagaland Wildlife and Biodiversity Conservation Trust. In 2011, she coordinated a survey to determine the status of wildlife in the state for the Forest Department in eight locations across the state. During the survey camera traps were used for the first time in the state. One of the clear threats to wildlife was the absence of wildlife conservation education awareness programmes amongst the communities across the state.

In October 2012 this fact took on a life-sized canvas as she led a team from Conservation India to Pangti village near the Doyang Reservoir under Wokha district, Nagaland. Here, the team uncovered the massacre of thousands of migrating Amur Falcons.

What followed was a string of meetings with leaders of the villages of Pangti, Pungro and Okhtosto, appointments with the Chief Minister and at the Chief Minister Office, as well as with the Wildlife Wing of the Forest Department and the district administration. These efforts paid off when the Pangti Village Council announced a ban on the killing and trapping of the Amur Falcons under its jurisdiction on the eve of the migratory season in 2013. The same year a team of scientists from Hungary assisted by the Wildlife Institute of India, arrived in Pangti to satellite tag three birds. That year Nagaland earned the title of ‘Falcon capital of the world’.

It was exceedingly clear that an awareness programme was required to stem the scale of hunting, and so Bano and her team spearheaded the ‘Friends of the Amur Falcon’ campaign. For this they adopted ‘Under the Canopy’, a manual that provides a window to wildlife education in Northeast India. With support from the Bombay Natural History Society, Wildlife Conservation Society, Wildlife Conservation Trust and Raptor Research and Conservation Foundation, three Eco Clubs with 80 students from the ages of nine to 11 were established in 2013. Since then the Eco Clubs have increased to four, covering the villages of Sungro, Pangti, Okhtoso and Doyang and students continue to be taught by a team of educators who regularly undergo an annual refresher course with qualified resource persons. There has also been engagement with the community on alternate livelihood means, with home-stays as an immediate and viable option.

An intelligent, committed trailblazer, Bano is a pillar of conservation in India who has crafted one of the country’s most staggering conservation success stories.

– By Bikram Grewal, author and publisher