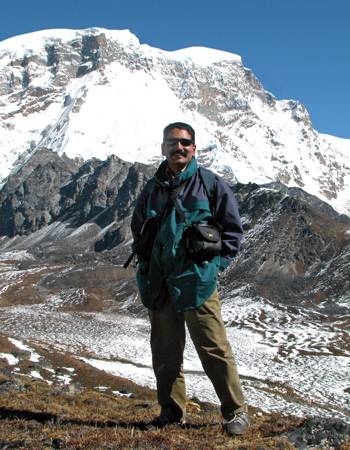 Dr. Yash Veer Bhatnagar is a mountain man, most at home in the icy environs of Spiti and other high-altitude habitats that support such elusive and charismatic creatures as snow leopards, markhor, marmots and red foxes. Far from the tropical forests most associated with Indian wildlife, the icy wildernesses of Asia’s cold deserts hold a bewildering diversity of wild species whose very existence lies threatened not only by local pressures, but also on account of galloping climate change.

As the Director of the Snow Leopard Trust’s India Programme, and Co-director of the Nature Conservation Foundation’s High Altitude Programme, for over a decade, Bhatnagar is without doubt a key solution provider for India’s high-Himalaya conservation strategy.

It was in pursuit of his PhD thesis between 1991 and 1996 that he first began to study the ecology of the Asiatic ibex. This broke new ground, for no similar long-term studies had ever been conducted anywhere in the world on this species. In 1998, he realised that protecting high-altitude flora and fauna was impossible without the participation, support and involvement of locals who often had to pay the highest price for wildlife conservation by way of lost livestock. His team’s conflict-management strategy in Ladakh’s remote Markha valley soon drew the attention of several scientists and within a year he found himself organising a path-breaking, multi-dimensional exploration of Ladakh that drew together an unprecedented 15 scientists and researchers of the Wildlife Institute of India. He never looked back.

Currently considered to be one of the world’s most authoritative ungulate specialists, Dr. Bhatnagar has walked the rough trails taken by ibex, Tibetan gazelle and kiang, so as to throw light on their ecological imperatives. He has also overseen studies conducted by scientists on urial, markhor, argali, bharal and other such high-altitude species. A great believer in the principle of ‘convergence of goals’, he is currently working to scale up conservation efforts in remote, mountainous areas so as to offer communities livelihoods based on the protection of, rather than the unsustainable exploitation of wildlife.

It was his team that conceptualised the ‘4 E’ approach, basing strategies on ecology, energy, education and enterprise to ensure holistic participatory conservation in the 4,000 sq. km. upper Spiti landscape. Among the many committees that seek his advice and involvement is the National Snow Leopard Ecosystem Priorities (NSLEP) for the Global Snow Leopard Forum, whose mission he helped draft. He has also been part of other landscape-based conservation programmes in Ladakh, Kashmir, Sikkim and Arunachal Pradesh.

Dr. Bhatnagar exemplifies nuanced conservation biology that works with and for both species and local communities.