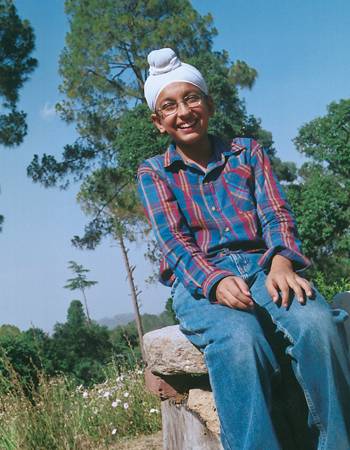 Kirat Singh Too young even to qualify for a Young Naturalist Award, Kirat has been singled out for a special award for his unbelievable drive and ability to work doggedly towards the objective of saving tigers when they were vanishing into thin air. When Wordsworth suggested that: “The child is father of the man,” he must have had someone like young Kirat in mind. How much can a boy whose birth date is November 27, 1992 have achieved? Judge for yourself from the letter he wrote to Prime Minister Manmohan Singh: “We do not mean to question your judgment, Sir, still we feel that being the adults of tomorrow’s India, we should have a say in matters. Dams and the interlinking of rivers might help in the short term, but what will the country do when dams break, floods occur and people die.

Forget about becoming developed, India will go into a recession.” After the tragic death of the Sariska tigers, he travelled to Ranthambhore where he met with guards, officials, activists and villagers who knew the inside story of the poaching deaths. He then knocked on the doors of Belinda Wright, Valmik Thapar, the Director of Project Tiger and the CBI officers investigating the case. When he heard about the Tibet connection in the tiger, leopard and otter skins trade, he and his friends on the Junior Tiger Task Force asked for and have been granted an appointment to meet the Dalai Lama. On NDTV’s Big Fight he faced off against social activists who wanted to deny arms to forest staff, saying that giving land rights to villagers instead, will encourage them to take the tiger’s side against poachers. His response: “Do you really think we have the time to experiment like this with the future of the tiger? We probably have no more than 1,500 wild tigers left alive in India. Poaching is an illegal trade like trafficking in drugs and arms.

We need to tighten not loosen protection around our forests. Forests are sources of pure river water.” He has travelled to the Kaziranga National Park, the wilds of Sikkim and even the Nathu La border. Anti-cracker campaigns, cleaning the Yamuna, waste management, water harvesting... have all been a part of his agenda. He was even presented with The Sri Ram School’s Prayukti Award for Lateral Thinking in 2004-05. We wish he would grow up ‘just a bit faster’ to take charge of a planet that our generation has not looked after well at all. Kirat gives us hope for tomorrow. He is destined to be a leader with a green heart. He is already a wildlife defender with a lifetime of service ahead of him.