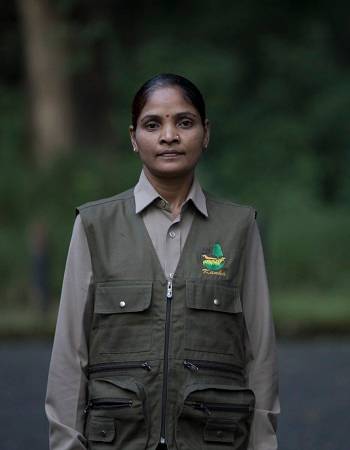 Coming from the small village of Ajhwaar in the Dindori district of Madhya Pradesh, Laxmi Maravi now calls the Kanha Tiger Reserve her home. The first woman from her village to join the Forest Department, she was inducted into the Territorial Forest Division at Dindori as a Forest Guard in 2005, and was subsequently transferred to Kanha Tiger Reserve. Since then, she has patrolled vast areas of the tiger reserve, done fieldwork and data collection for the preparation of Tiger Conservation Plan, and been involved in the Gaur Translocation Project from Kanha to Bandhavgarh. She’s built a lifetime of memories in the field, including one memorable encounter that found her facing a wild boar attack equipped with nothing but an umbrella!

Her educational background, facility with languages and knowledge of nature, coupled with her warm and charming demeanour, made Maravi an ideal candidate for Kanha’s Nature Education Program, an initiative by The Last Wilderness Foundation (LWF) in association with the Forest Department. Today, she conducts this outreach program for school children across the region. For the last two years, she has been in-charge of organising and conducting educational tours for students from Kanha’s buffer zone schools to New Delhi, and is simultaneously serving as Manager of the Bhoorsingh Pre-Primary School, a private initiative of the Park Management, which runs on public donations. Maravi has also been assisting in the LWF-KTR joint initiative for resettled Baiga tribals to produce Baiga Jewellery as an alternative source of income for Baiga women. She also coordinates with the local offices of WWF-India, The Corbett Foundation, Taj Resorts, Singinawa Conservation Foundation and others to bring in resource expertise for these educational experiences.

In between all this, she is still actively involved in the anti-poaching programs conducted by KTR! The sheer volume of work she undertakes and her incredible work ethic are enough to win Laxmi an award. The fact that she has overcome inhibiting odds to reach here, make her all the more special.