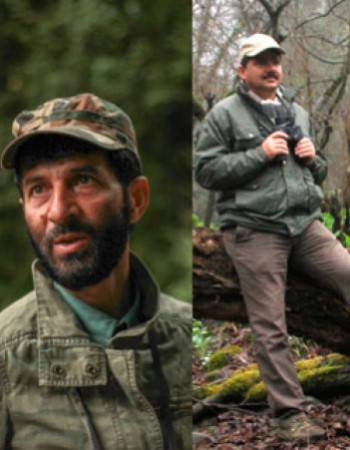 Champions of the exquisite wildlife of India's northernmost state, Tahir Shawl and Nazir Malik's steadfast commitment to the preservation and protection of Kashmir's Dachigam National Park is second to none.

In a paradise called Kashmir, there is a place even more beautiful. Forester Nazir Malik is its bard, narrating the story of Dachigam National Park. Nazir knows Dachigam as intimately as a lover… and every time he walks the forest, it is as though he has begun the affair anew, brimming with excitement as he lures you into his forest. His voice swells with pride as he speaks of the hangul - Dachigam is the only place in the world to offer sanctuary to this rare, exquisite red deer; softens when he recalls meeting his favourite animal - the Himalayan black bear; dips when he worries about the threats that loom overhead. Nazir recognises all the birds in the park, and is equally well-versed in its flora. He first walked the park as a child, and he has never stopped. His commitment to Dachigam is stoic; even refusing promotions, when they took him away from his beloved forest. Nazir freely shares his knowledge with anyone who is interested, and his childlike wonder is addictive. He inspires, and makes you fall in love. You leave, only to come back again, now, a warrior for Dachigam.

Tahir Shawl's love for wildlife runs as deep - he has shepherded the realms of some of the country's rarest wildlife, from the snow leopard in Hemis National Park to the Black-necked Cranes and kiangs on the Indo-Chinese border. He currently heads Dachigam as its Field Director. Tahir is a student of the wilds. In his quest to understand, and conserve wildlife, he has studied the endangered Tibetan antelope, tracked the migratory paths of cranes and other waterfowl. He is a fierce protector, working to give the hangul a new lease on life, and marshalling political support to ease pressure on Dachigam from graziers, whose sheep take over the hangul meadows, and to relocate the sheep farm which lies in its core. He once rescued a critically-injured snow leopard from a harried crowd, bundled it into a vehicle, kept it in his official residence, and tended to it till it recovered and could be released back in its snowy realm. His resilience is legendary and perhaps the only thing that stands between Dachigam and its destruction.