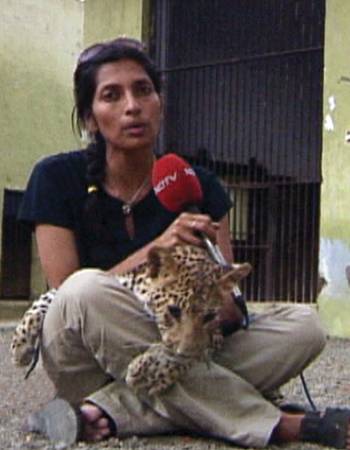 NDTV is best known for the high standards it has set for television reporting in the arena of politics, business, sports and entertainment. Yet, one NDTV programme has consistently managed to hold its own in the rough and tumble world of commerce by creating a loyal viewership numbering millions of Indians, young and old – Born Wild.

It is shot and presented by Swati Thyagarajan, a young woman whose love for wildlife manifests itself through her presentation skills and her willingness to travel where the story demands. She has achieved for wildlife conservation what few conservation organisations have been able to – genuinely involve the common junta with complicated wildlife conservation issues by bringing the reality and consequences of ecological damage right into their homes and their lives.

Thyagarajan felt that the print media did a better job of covering environmental issues than television, which traditionally focussed on politics and entertainment. She was determined to change this. In the process, she managed to carve a place for herself in Indian television, which as a rule thrives on programmes catering to the lowest common denominator.

NDTV’s consistent support for Born Wild – over 60 programmes in three years – has seen it stay on air despite limited budgets, difficulty in getting proof of claims on camera, sources that cannot be named and having to travel to remote and often very unsafe (from humans not animals) parts of India. Born Wild speaks wildlife truths week after week and brings unbiased stories, both positive and negative, to the notice of the public. Many politicians and even NGOs say that the first time they came to know of some vital wildlife issue or other was through NDTV’s Born Wild.

Thyagarajan was sent to cover the tsunami, the reintroduction of rhinos in Manas, the problems of olive ridley turtles in Orissa, the fate of the cold desert wildlife of Ladakh and of course, the terrible tiger crisis that still engulfs all of tigerland in India.

She was one of the few journalists whose coverage of the leopard-human conflict in the Sanjay Gandhi National Park did not rely on the macabre and gory aspects of the problem, choosing instead to highlight the destruction of the forest fringe, the lack of resources of the Forest Department and the politically-supported encroachments. An admirer of David Attenborough, Swati Thyagarajan travelled to the U.K. to interview him for NDTV. Of course, she deserves our admiration and support. But without NDTV providing her with the “wind under her wings”, none of what she did might have been possible.