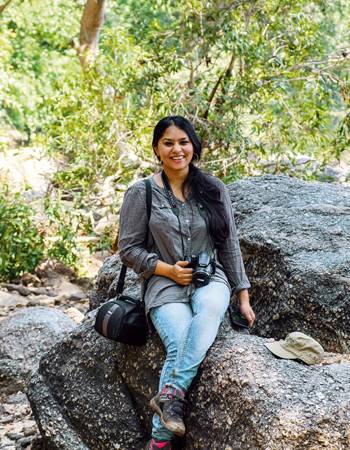 Neha Sinha The world needs strong yet sensitive, opinionated yet rational, determined yet appreciative women. And if there’s anyone in India who fits the bill, it’s Neha Sinha. She worked as a senior reporter/ environmental journalist for The Indian Express, but the call of the wild proved too strong to ignore and she soon jumped ship to conservation. Quitting her job, Sinha took a swan dive into the world of conservation science, policy, law and governance by getting selected for Oxford University’s Masters of Science in Biodiversity, Conservation and Management on an INLAKS scholarship.

Her sweet voice is a powerful one that speaks in favour of threatened species and ecosystems. Working with the Bombay Natural History Society (BNHS) on policy and advocacy, her contributions have involved providing valuable inputs on amendments to the Wild Life Protection Act, 1972, Wetland Rules (2017), Compensatory Afforestation Fund Act (2016), and T.S.R. Subramanian High Level Committee to Review Environmental Laws (2015). She also represented BNHS while drafting the National Biodiversity Targets for the Government of India.

Amongst the many environmental projects and campaigns that she has bolstered, is the Amur Falcon Campaign in Nagaland – the biggest conservation success story of recent times. In this regard, she works on the ground in Nagaland and Manipur, creating awareness and education among local communities, as well as at the policy level through advocacy and environmental education programmes.

Using her knowledge, oratory skills and bold penmanship, Neha has trained hundreds of people, ranging from media, conservationists, citizens, forest guards to Gond tribals, in the basics of biodiversity, policy and advocacy. Her articles on the environment are regularly featured in publications like the Economic and Political Weekly, The Hindu, and DailyO, and she is also a Consulting Editor (Environment) for The Wire and a reviewer for Current Science.

Neha Sinha is a force to reckon with and, in her words, wants to put her ‘gentle fury and absolute persistence’ to good use. We have complete faith that her indomitable spirit will see her persevere through the dark stormy night of India’s environmental crisis. She is a beacon of hope for all of us.