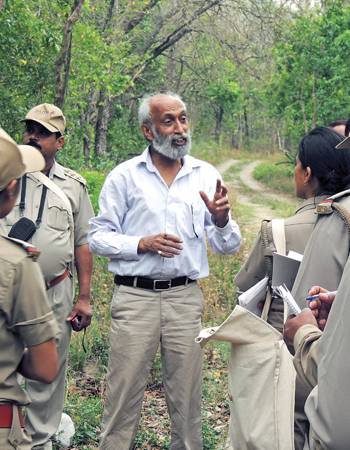 Param Jit Singh A geologist by training, Param Jit Singh is an anti-poaching mastermind, instrumental in a series of wildlife contraband seizures in Uttarakhand, including a crackdown on the late Sansar Chand in the early 90s. He has overseen the notification of several little-known, but critical biodiversity habitats including India’s first conservation reserve, the Asan Wetland Conservation Reserve. the Nandhaur Wildlife Sanctuary, the Naina Devi Bird Conservation Reserve, and the Pawalgarh Conservation Reserve. He also pioneered a 24x7 forest helpline called Van Mitra, an automatic ‘cloud’ call-centre that empowers citizens to report wildlife crimes.

Steely-eyed, and instantly purposeful, Pammiji, as he is affectionately called by friends and colleagues up and down the forest hierarchy, has that certain je ne sais quoi that makes a good forest officer great. In his three decades of service in Uttarakhand, he has held office as the Chief Conservator of Forests, Wildlife Administration and Intelligence, Uttarakhand, Chief Conservator of Forest, Kumaon, Divisional Forest Officer, Shivalik, State Director of Anti-poaching, Nodal Officer for Wireless Networking, the Director of the Nanda Devi Biosphere Reserve, including Valley of Flowers National Park and Nanda Devi National Park and presently CEO of the Compensatory Afforestation Fund Management and Planning (CAMPA). Never one to sit too long at his desk, Singh is one of those extremely rare and invaluable breed of officers, who actually enjoy the rigours of the field. In his words, “If my staff can do it, so can I.” This includes trekking miles on anti-poaching patrols, surveying rough terrain for habitat management initiatives to help create corridors and buffers for wildlife, and training staff. Popular and instantly personable, he has created a vast network of informants that is purposefully hitting back at the dangerous wildlife-crime nexus that takes such a vicious toll on wildlife across India.

A thinker and a doer, Param Jit Singh realises that without the support of local communities the effectiveness of biodiversity conservation will be temporary at best. His no-nonsense charm wins him much support, at both the local and national level and all this he uses to protect the wildlife that has become the purpose of his life.