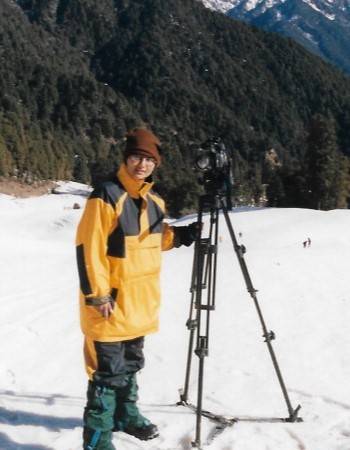 Loved and admired across the board, tousle-haired, straight talking Rita Banerji is a conservation filmmaker par excellence. Starting out as an apprentice under the legendary filmmaker Mike Pandey, with whom she worked for a decade, Banerji struck out on her own to found Dusty Foot Productions. Over the past two decades, her portfolio includes several path breaking projects in the capacity of director, producer, editor and cameraperson, most times wearing more than one cap. She has spent days out on the field documenting communities and wildlife across India’s vast geography -- she has walked with the honey-hunting Kurumbas in the Nilgiris; gone to sea with the transient traditional fisherfolk of Jambudwip; documented the realities of turtle conservation and traditional fisheries in Orissa; lived with the women's seaweed collectors of Gulf of Mannar; filmed the ‘Save the Chiru’ Campaign and alternative livelihood options for the shahtoosh shawl weaver community in the high Himalaya, and more.

The results of these, often month-long endeavours, went on to create large-scale impact. ‘The Last Migration – Wild Elephant Capture in Sarguja’ (1994) on the capture of a herd of wild elephants in eastern India was the first film from Asia to win the prestigious Panda Award at Wildscreen, U.K., also known as the Green Oscar.  ‘Shores of Silence – Whale Sharks in India’, a documentary on whale shark slaughter on the west coast of India, led to the ban on killings. ‘The Wild Meat Trail’ (2010), documented the realities of hunting and sale of wild meat in the Northeast of India. The latter two also won Panda Awards, amongst others.

‘The Wildmeat Trail’ set the foundation for Banerji’s next journey, a long-term association with conservation in northeast India.  She established Under the Canopy, an environment education initiative developed by Payal Molur for rural children in the Northeast. In 2014, Banerji and Dusty Foot collaborated with the North East Network to set up Green Hub, a fellowship for youth from the northeastern states, which aims to empower them in conservation education, action, climate sustainability and social change through the visual medium; and create a digital resource bank for wildlife, environment and indigenous knowledge. Thus far, close to 100 young people have been trained at Green Hub, and the majority of them work with tribal communities on conservation issues.

A passionate filmmaker and conservationist, a fun-loving and inspiring mentor, and an impactful agent of change, Rita Banerji sets the gold standard for wildlife filmmakers in India.