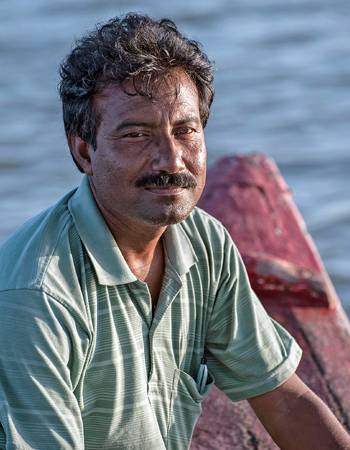 Sarbaranjan Mondal He was 10 years old when he saw his first tiger. It was dead. The animal had strayed into Jamespur village and had been hammered to death by villagers. Traumatised, he vowed to do something for wildlife, especially for tigers. Today, Sarbaranjan works passionately for the conservation of the mangroves and wildlife of the Sundarbans. He earns his living from his small farm and by tutoring students. He organises his life around the work he does for the Sundarbans Tiger Reserve. He is currently working for the Society for Heritage & Ecological Researches (SHER) on a project aimed at dealing with tiger-human conflicts in the Sundarbans and raising awareness through campaigns at schools, local clubs, organisations and joint forest management committees.

Sarbaranjan has been coordinating an anti-poaching information network in coordination with the field staff of the Sundarbans Tiger Reserve since 1996. Many raids have been conducted and a substantial amount of bush-meat, nylon snares, and timber has been recovered based on information provided by him over the years. His tip-offs have helped officials arrest a number of poachers. For his trouble, he lives under constant threat to his life from notorious poaching gangs.

Sarbaranjan believes that reducing tiger-human conflict in the delta and assisting foresters to rescue straying tigers from villages is critical to the long-term future of the tiger in the Sundarbans.

Nevertheless, he is anything but tiger-centric, having rescued salt-water crocodiles, monitor lizards, chital, wild pigs, fishing cats and birds whenever they got trapped behind ‘enemy lines’ in villages. He works with the West Bengal Forest Department to rehabilitate and, whenever possible, release such animals back to the wild. In the Sundarbans, his work in rescuing wild species from villages during Cyclone Aila in 2009 turned him into a trusted hero in the region. Currently, he conducts door-to-door awareness campaigns in villages and is busy fashioning students and teachers into a strong support base for tigers and mangroves.