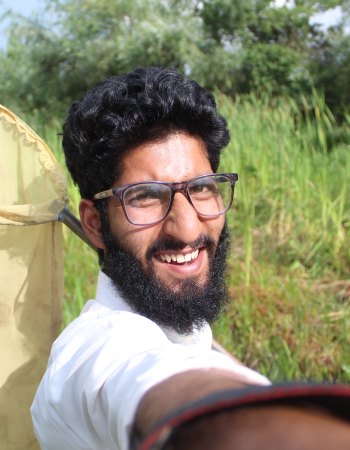 Suhaib possesses an unending curiosity for the scientific workings of the natural world. The 23-year-old’s earnest desire to understand the vagaries of the wild, coupled with his perpetual enthusiasm for documenting its delights through photography make him an indispensable resource to the Centre for Biological Diversity at Wildlife Conservation Fund in Vihi District, Pampore Landscape, Jammu and Kashmir. He was director at the organisation until 2019, and was promoted to Director of Research last year. He avidly documents the natural world that fascinates him, from endemic flora to fungi and microorganisms. He also scrutinises insects, recording behaviours with endless patience. He nurses a particular interest in Diptera, an order of two-winged flies, and myxomycete (slime molds).

He has reviewed a manuscript for the Journal of Threatened Taxa and has consulted as a ‘Fungi Expert’ with one of the largest open access online databases that focus on biodiversity, Eflora of India. He has contributed natural history information to several other online databases, including SpeciesFile.org, ASCOFrance (one of the largest databases for Ascomycetes) and Mushroom Observer. He is a contributing administrator to various Facebook pages and groups on natural history, including Slime Mold Identification and Appreciation, Fungi India, Fungus Identification.

His endeavours in documenting the wildlife world around him prompted him to pick up a pencil and brush. He has won many district and state level awards for his art. He loves wildlife painting, inspired by the works of Peter Scott and David Shepherd, and also does pencil and watercolour illustrations for children. He also enjoys teaching children, introducing them to the basic concepts of identification, microscopy and conservation.

Suhaib’s zeal for learning through observation, and willingness to fill the gaps in knowledge on a vast array of species undeniably make him an asset to the conservation community.