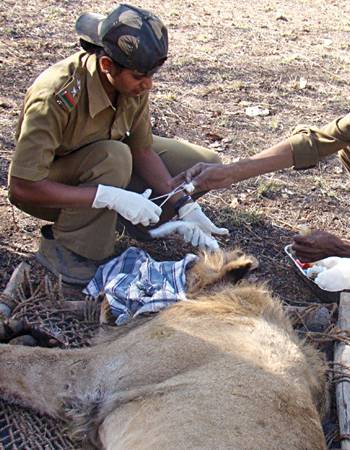 The extraordinary men and women who serve as foresters and forest guards of the Gir Wildlife Sanctuary and National Park in Gujarat are the gatekeepers of one of India’s most successful conservation stories – the thriving well-being of the planet’s last population of Asiatic lions. They are rescuers, habitat managers, tourism regulators, skillful trackers and, most importantly, peacekeepers of the volatile relationship between park authorities and the neighbouring communities.

Representing this team are three of its most highly respected and dynamic members. Known as ‘the lion queen’ of India, forester Rasila Vadher’s legendary exploits could fill a book. The leader of the department’s wildlife rescue division, the fearless Vadher has plunged into the depths of a well to rescue a leopard, tranquilised lions from seemingly impossible angles, smoothly shifted venomous snakes from inside houses, and participated in over 800 successful rescue operations. Completely at ease in the forest, intensely committed to the protection of wildlife, she stands strong in the face of danger…and then subdues it.

Quiet and untiring, forest guard M.A. Rayjada is a much cherished member of the department. In a career that spans close to a decade, he has provided crucial assistance in sensitive operations more times than can be counted. Most notably, in 2008, when 2,000 irate villagers tried to enter the forest without permission, he single-handedly pacified the mob, preventing damage to department property and potentially saving lives.

Despite being a victim to violent attacks at numerous points in her career, Madhu Karengia’s dedication to her job as a forester has never even momentarily faltered. Karengia has cleared over 36 ha. of encroachment into the forest, made arrests on offences of illegal entry and unauthorised grazing, and followed through with the collection of fines, and even lends a hand in the rearing of orphaned wildlife.

The protectors of Gir are Earth heroes…