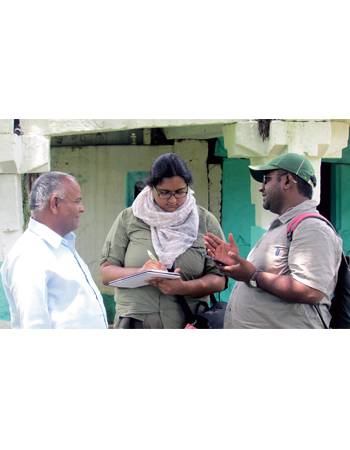 Vaishali Rawat When she was 16, Vaishali Rawat saw two roads diverge in the yellow woods. Five years later, she stands inspired and proud, having traversed the road less taken.

Currently handling media, outreach and science communications for the Wildlife Conservation Society-India, Vaishali is taking conservation and wildlife issues to the masses through written and photo stories. Armed with a critical mind and a sharp pen, she has had articles featured in Sanctuary Asia and other publications like Nature inFocus

Though her interest may lie in igniting minds through her words, her prowess extends well beyond. Through her time in college, Vaishali actively volunteered across different disciplines of conservation, gaining invaluable exposure and experience: she learned ecological fieldwork on carnivore occurance in the Kanha-Pench Landscape with the WCS; understood the basics of animal-handling at the Madras Crocodile Bank Trust (MCBT); and battled the soaring temperatures of the Thar Desert while participating in the annual survey of the Great Indian Bustard. When in the field, she engages with various stakeholders, scientists, forest guards and locals, gathering a wide array of perspectives, which have allowed her to form her own, unbiased views. She has been equally invested in the non-glamorous aspect of conservation advocacy, a lot of which includes tedious desk and paperwork. Through her journey, Vaishali has had her passion molded by accomplished conservation journalist, Prerna Singh Bindra. Under Prerna’s mentorship, she has drafted stories on wildlife news and policies, served as the assistant editor of the journal TigerLink for three years, and delved into the nuances of natural resource management in India.

Early on, she learned that while there was increasing research on wildlife and conservation in India, very few efforts were being made to communicate its significance to the public. She pursued this work throughout her time at the UNESCO Centre of the Wildlife Institute of India, as well as through the education and awareness programmes at MCBT. As Vaishali’s appreciation for India’s staggering biodiversity grows with every new adventure, so does her discontentment with the underrepresentation of environmental issues in the mainstream media. Shoulders squared, she is striving to popularise conservation and create a groundswell of public support for the natural landscapes on which we all depend. A young woman of worth, we’re certain that whenever she finds a fork in the road, she will choose the one less travelled.