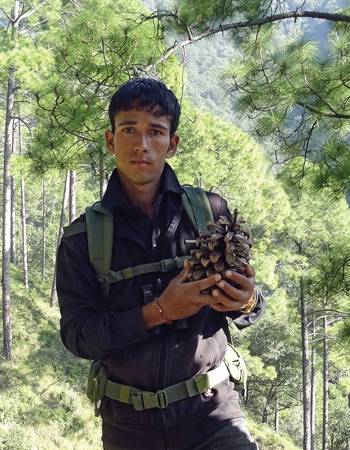 Virendra Singh Panwar Soft-spoken, but smitten by nature, this young lad from Kolti village in the Garhwal Himalaya must walk seven kilometres just to reach a motorable road from where he must travel another five kilometres to get to the college that he believes is his gateway to the future. When not trudging a quarter of a hundred kilometers to college and back, he tramps the paths of ‘his’ forest, to earn a modest livelihood as a nature guide.

At 21, clearly his adventures have only just begun. The management of the private Jabarkhet Nature Reserve was unsure of his commitment when they took him on as a nature guide. But in the one year since they took a ‘gamble’ on him, Viru has laid all apprehensions to rest, rapidly picking up the basics of field identification, camera trapping, and photography, helped along by little more than a guidebook on the flora of the Himalaya, a CD of birdcalls, a second-hand laptop, a pair of binoculars and a basic camera. Grabbing every opportunity to attend naturalist training camps organised by the Uttarakhand Forest Department, he hungrily absorbed lessons that served to hone his skills. Today, he has already turned into more than a naturalist that most visitors might take for granted. Combining his native knowledge of the forest with his newly developed skills, he eagerly shares this with visitors and equally learns new things from them.

Each wild denizen of Jabarkhet has a friend in Viru. This year when he discovered a Khaleej Pheasant nest with as many as nine eggs in it, he made it his mission to ensure that no one approached the nest. His carefully-placed camera traps recorded a leopard cat with two kittens and Viru still looks upon them as family. Proud of this natural heritage, committed to his job, he is an inspiration to young people in this Himalayan community and is working to win their support for total involvement in protecting the wilds he knows are vital to the health and happiness of his people.