In Late Stone Age Europe, 20,000 years ago, a teenage hunter is tossed over a cliff by a bison. He survives the fall, just fracturing his foot. On his way back home, he is attacked by a pack of wolves, but escapes death again by climbing a dead tree and injuring one of the wolves, which the pack leaves behind. He spares the wolf’s life, and feeds and nurses the animal back to health. She follows him home, and gives birth to a litter of five pups. The wolf family becomes part of the tribe, which becomes the first to hunt with domesticated wolves.

The story is fictional, from the 2018 prehistorical adventure film ‘Alpha’, which speculates on the origins of the human-dog relationship. But the truth may not be less strange. Whichever domestication theory we choose to believe (there are more than one), the ancestors of modern dogs soon began to aid Homo sapiens on hunts. And that was when our destinies began to entwine.

We have come a long way since we first domesticated wolves. From the hunter-gatherers of the Stone Age, we have become a species that has single-handedly altered the Earth’s environment. A force powerful enough to bring about change at a planetary level, we have brought in a new geological epoch – the Anthropocene. As we grapple with poaching, forest fragmentation, and other human activities that harm wildlife and ecosystems, once again, we turn to dogs to help, and we find them ready for the next command, ears raised.

Canine-aided conservation work is an emerging domain, and holds immense promise. I recently spoke to my colleague Kiran Rahalkar, who heads the Wildlife Conservation Trust’s (WCT) Wildlife Law Enforcement Training Programme, and is also in-charge of WCT’s Conservation Dogs Unit. The team comprising four working dogs and two men has been solving complex conservation problems for the past two years. Some excerpts follow.

Rizwan Mithawala (RM): What have the dogs been up to?

Kiran Rahalkar (KR): Our conservation dogs act as force multipliers and help different teams carry out their conservation interventions more efficiently. We humans ‘look’ for clues… dogs ‘sniff’ them out. They have helped in finding snares and traps, and also in tracking elusive species. This dog-human team also plays a crucial role in monitoring large landscapes and critical habitats. 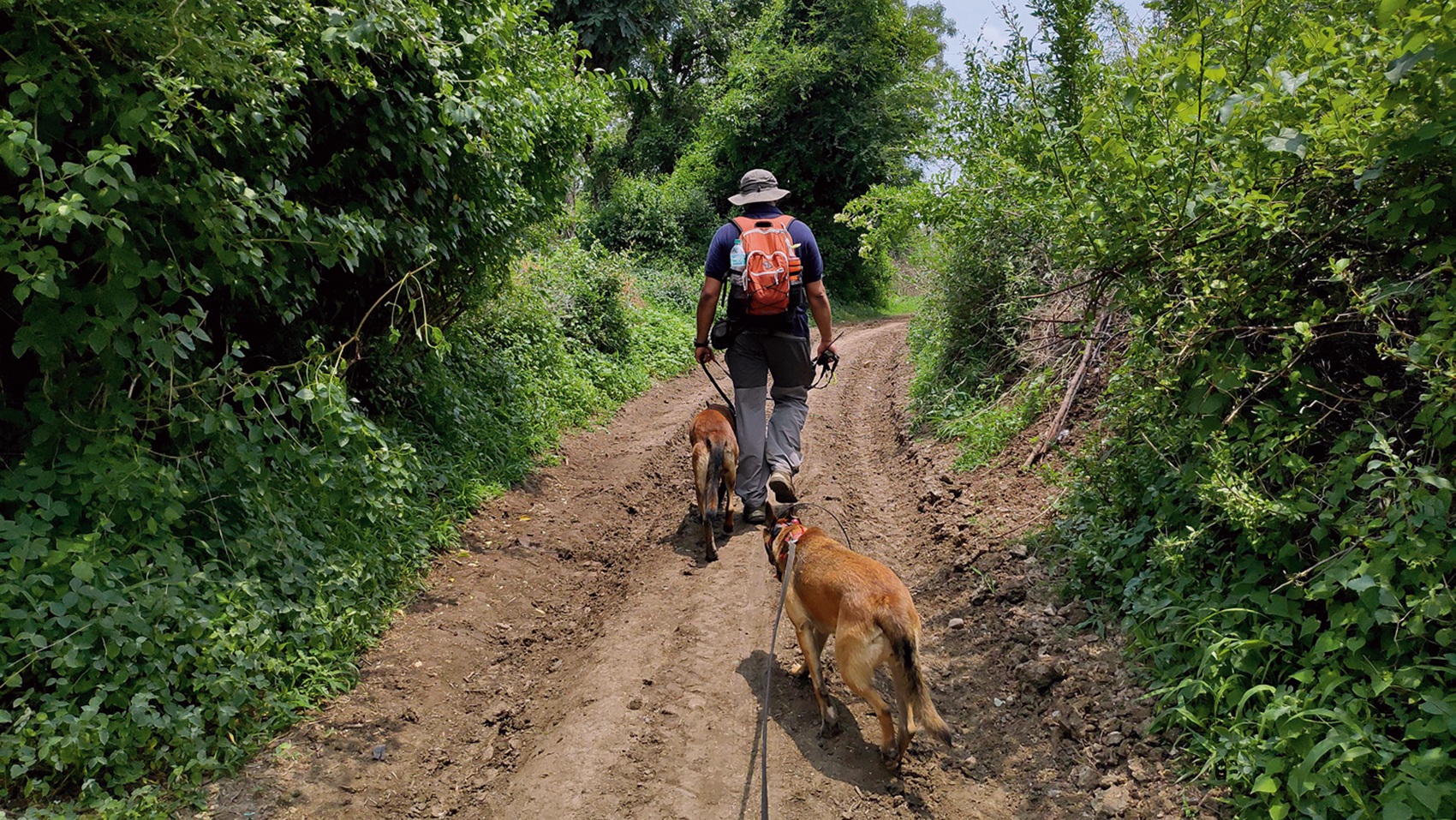 The WCT team takes dogs on snare detection patrol in a multi-use area in the buffer zone of the Melghat Tiger Reserve. Photo: Ninad Bhosale/WCT.

RM: What goes into their training?

KR: Training is foundational, and we train them in such a manner that they are ever ready to face challenging field conditions. The handler and dogs work as a cohesive unit. The handler cares for the dog’s day-to-day needs and provides the mental stimulus required to perform the given tasks. Some trainings – such as wild animal scent detection – are imparted in controlled environments, others on location, in the field.

RM: We know that dogs love action-oriented commands. How do you keep them in good shape, physically and mentally, when they are not deployed in the field?

KR: Drills are practiced regularly. One of them, cone detection, involves a specific scent added to one out of the several cones laid out. The dog must hone in on the cone with the target scent, which could, for instance, be carnivore urine, or excreta. They are also trained to identify biological articles related to wildlife, such as skin, blood and bones, hidden in a detection wall. These exercises sharpen their olfactory and detection skills. They also practice tracking and trailing humans and animals, and vehicular searches, in simulated settings. 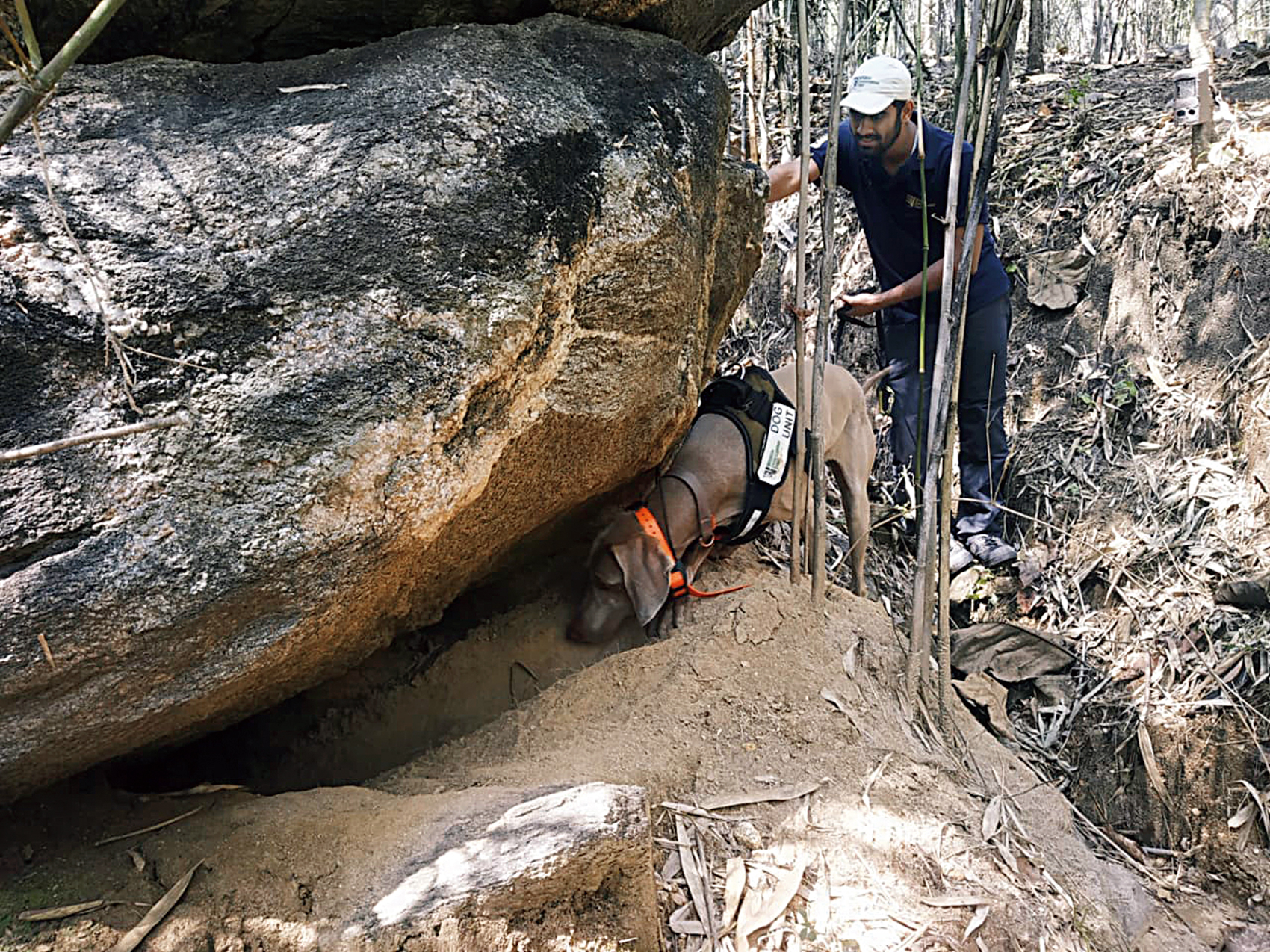 RM: How are they rested if they must be in the field for days on end?

KR: Yes, we have faced the problem of dog accommodation at project sites, where assignments may last weeks. We modified a vehicle into a mobile kennel that can accommodate four dogs. It is well-ventilated with exhaust fans, and also equipped with temperature sensors and a surveillance camera. The vehicle also provides speedy, convenient transit during and between deployments across vastly different landscapes.

RM: Tell me about their unique role in Road Ecology surveys.

KR: Roads and other linear infrastructures typically cut across large landscapes which often have varying degrees of animal abundance. Conservation dogs help us gather data on the presence and movement of wild animals, especially large carnivores. WCT is the first organisation in India to deploy conservation dogs for road ecology surveys. Our dogs have worked along the National Highway 44 (NH-44, earlier called NH-7) that cuts through the important Kanha-Pench Corridor, as well as the Harda-Betul Road that bisects the Melghat-Satpura corridor. The insights from such surveys guide WCT in recommending the construction of mitigation structures on critical wildlife crossing hotspots along these roads. 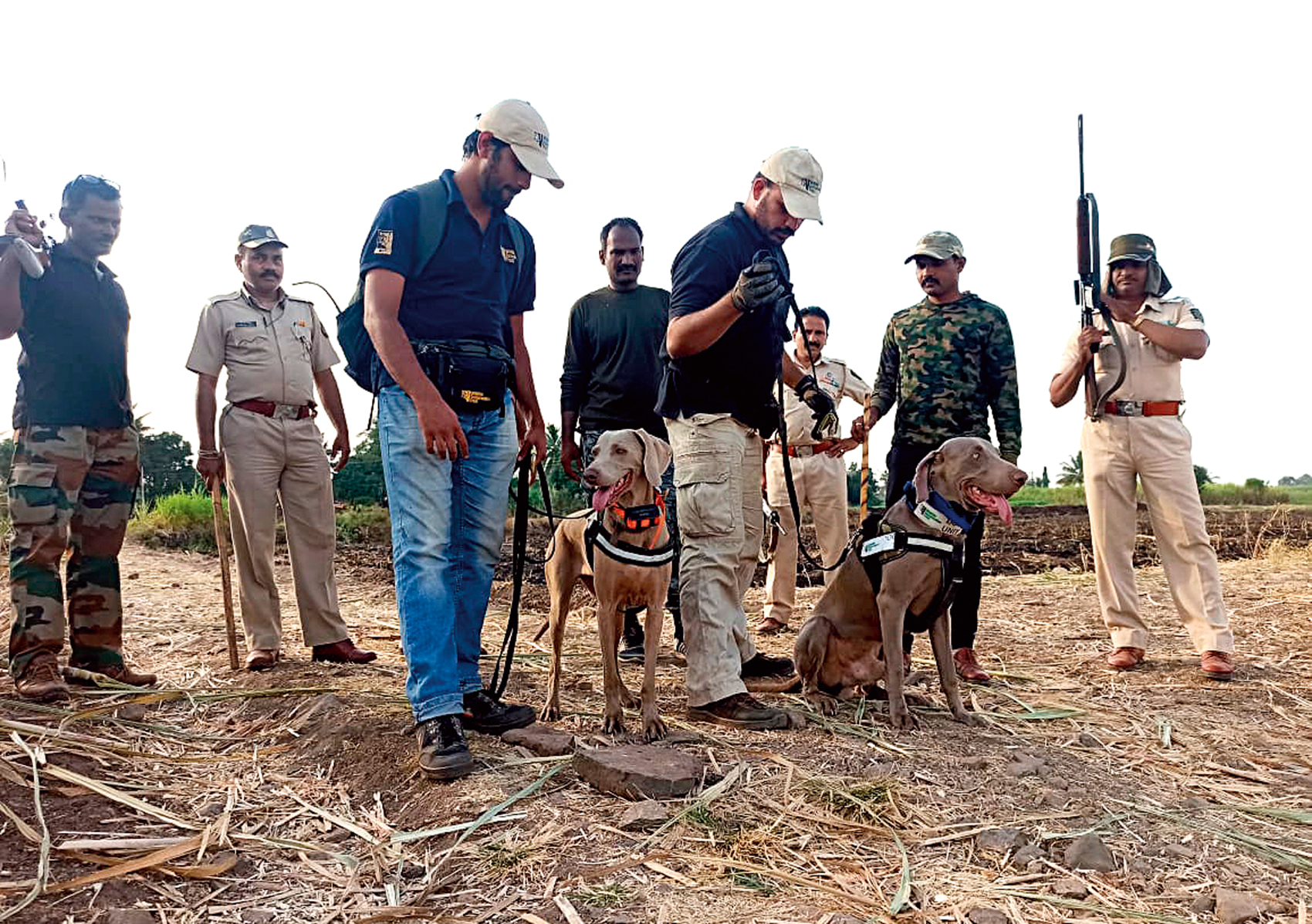 Conservation dogs ready to track a leopard that had entered a human-dominated landscape. Photo: Bhupesh Patil.

RM: How do dogs help tackle the menace of snares?

KR: Snares deployed by subsistence hunters and professional poachers are well-camouflaged and difficult to detect. But dogs can sniff them out. Our dogs are deployed in the buffer zones of tiger reserves and along corridors, which are more prone to the menace of snares. We have deployed our dogs in the buffer zone of the Melghat Tiger Reserve, and are planning to extend the programme to PAs in Madhya Pradesh and Vidarbha.

RM: Recently, they have been trained to detect the presence of pangolins. How can they help in protecting these endangered animals?

KR: Yes! WCT is working on the behaviour and ecology of the Indian pangolin in the Central Indian Landscape, with the Madhya Pradesh Forest Department. Pangolins are shy, cryptic, elusive and nocturnal, taking refuge in underground burrows during the day. This makes them difficult to spot. Our dogs were deployed in the Satpura and Pench Tiger Reserves, and have proved helpful in tracking pangolin burrows, scat and feeding locations. 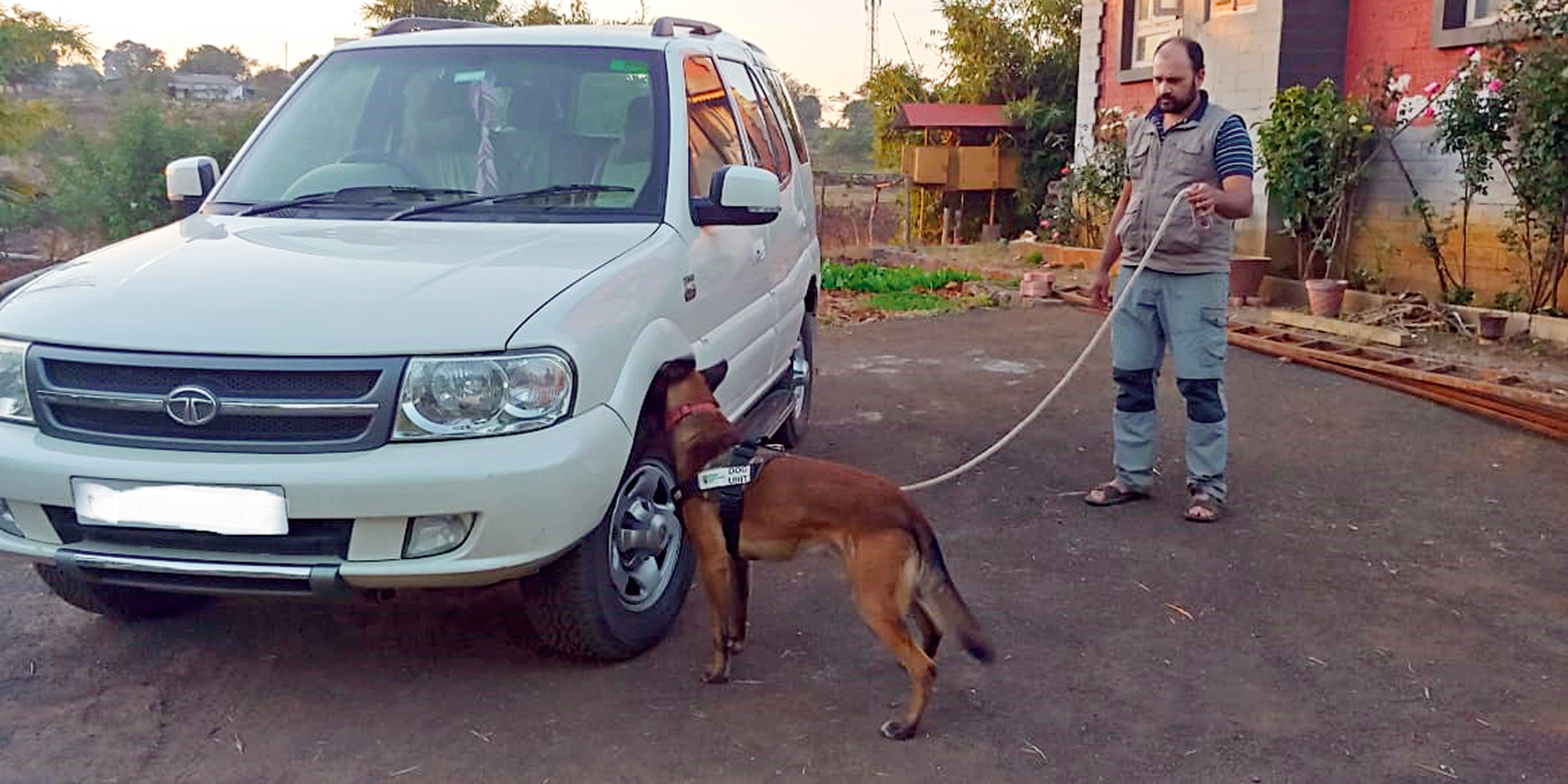 RM: How else do you think dogs can help conservation?

KR: With human-wildlife interactions on the rise, the chances of conflict-like situations are high, particularly when wild carnivores enter human-dominated environments. Conservation dogs help to track such animals in ways that humans cannot. This aids in tranquilising the animal, which can be returned to the wild, greatly reducing chances of harm to both humans and the animal that finds itself in such an unwelcome situation.