Sloth bears are not the easiest subjects to study. Which is how I found myself on a make-shift machaan, erected not more than three metres off the ground, in a dwarf Tugli tree Albizia amara in September 2002.

My tree, which would be my perch, was in the middle of the Daroji Sloth Bear Sanctuary near Kamalapur in Karnataka on the Deccan Plateau. It was here that I waited, with great anticipation, for one of the subcontinent’s most unpredictable and feared wild creatures to arrive.

I was taking a great risk, I guess, by choosing to sit on such a low machaan. But I had little choice, since all of the trees in this Deccan habitat are dwarves! Besides, I believed that the opportunity to photograph and study the behaviour of the wild sloth bear was well worth the risk.

As it turned out, I did not have long to wait. At 3.30 p.m. on that first afternoon, I nearly fell off my rickety machaan in excitement, when a big male bear appeared silently and settled down to feed, close to where I sat, on the molasses left for them with the permission of the authorities. I finished an entire roll in my excitement!

By the time I had loaded a new roll, the bear had disappeared. But my luck held. To my surprise and delight, what should appear but a second batch of bears: male, female and a sub-adult. They arrived at around 4.30 p.m. and lingered for about 45 minutes. After their departure, a third batch of bears appeared at about 5.30 p.m. and stayed for an hour. Not long after this group ambled away, a single female arrived and remained for 30 minutes or so!

As she departed, she passed directly under my machaan, giving me some very anxious moments. I was understandably not too keen to see her trying to climb the dwarf tree on which I sat. 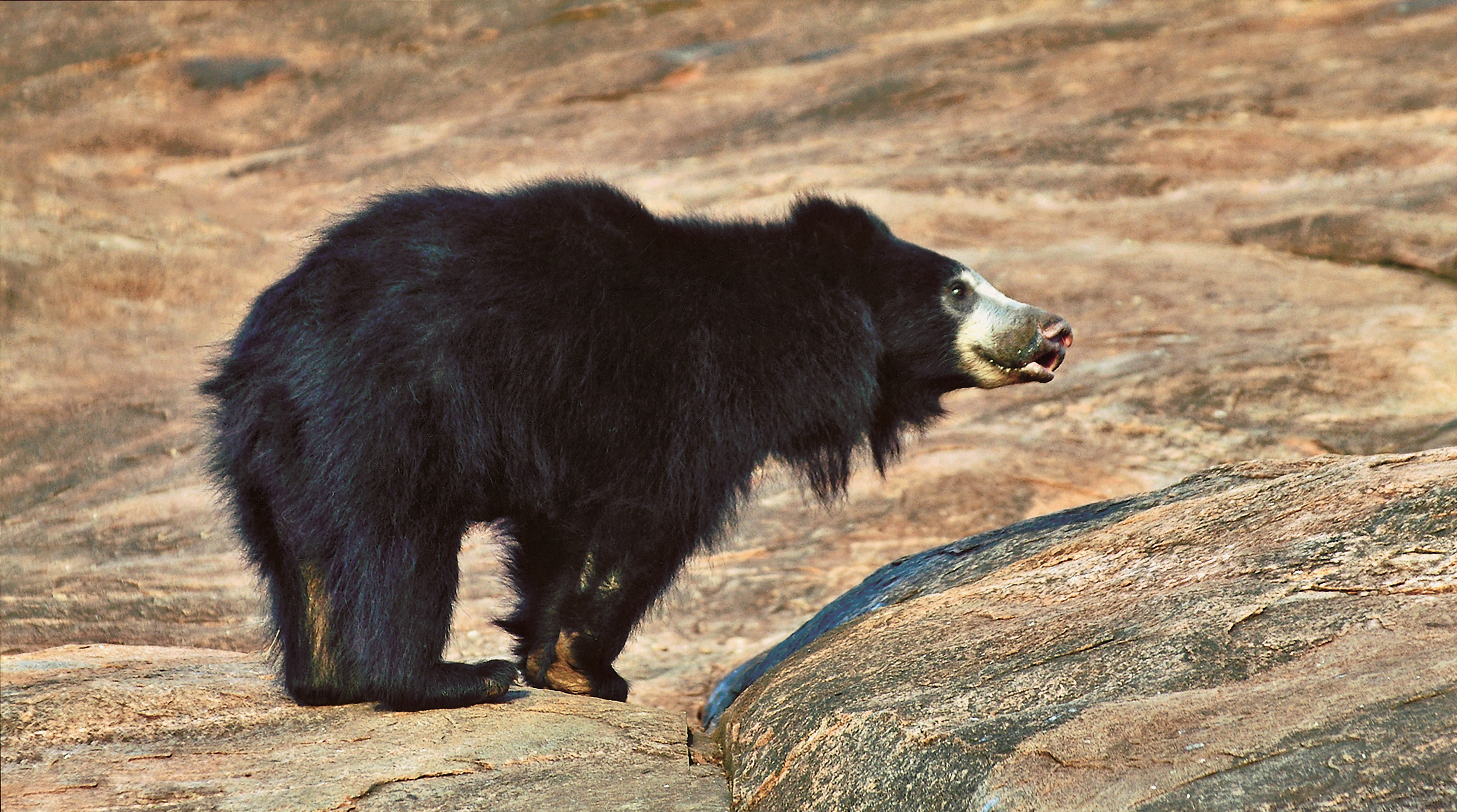 Sloth bears are usually solitary, except for females with cubs. They thrive on termites and forest fruit and are crucial to seed dispersal. Photo: T. N. A. Perumal.

I returned to the machaan at 2.30 the following afternoon, and remained until six p.m., observing groups of bears coming and going as they had the previous day. The bears seemed to adhere to a deliberate policy of coming in discrete groups, and after a set period of time, making way for others to appear on the scene in turn. It seemed to me that the bears travelled in family groups, taking care to avoid encounters with others by adopting different feeding times. I discovered later that each bear family resided in a separate cave within the sanctuary.

My experiences with the sloth bears of Daroji were made possible by one of the most devoted wildlife wardens I have ever met, Mr. Mathad, stationed at the Range Headquarters at Kamalapur. He had made the arrangements for my first observations from the machaan. He later chose another observation point in a rocky hillside strewn with boulders.

This time, I waited for the arrival of bears in the protection of a hide. As before, a single male arrived in the middle of the afternoon, followed by others in different time-slots, with an average interval of half to an hour. The intervals between the bears’ arrivals were far from dull, as I delighted in photographing the numerous birds that my concealed position in the hide allowed me to observe.

A pair of Painted Spurfowl Galloperdix lunulata, came frequently, skulking warily among the boulders as if they sensed my presence. Chattering Large Grey Babblers flocked to the bare rocks too, their constant hopping movements making them difficult to photograph. I was lucky to spot Yellow-eyed Babblers hunting in groups of twos and threes. Despite their name, these birds had attractive orange rings around their eyes, and were also extremely wary of me.

I also observed the Little Brown Dove, a typical bird of the stony, scrub habitat. A Red Turtle Dove was incubating two white eggs in a nest just centimetres off the ground in a nearby bush. Grey Partridges moved in coveys, while flocks of Common Quails moved about on the mud roads. I saw Grey Jungle Fowl in larger numbers here than I had seen in other sanctuaries. I spotted Yellow-throated Bulbuls skulking around, as well as the Indian Sandgrouse. A pair of Common Peafowl regularly appeared on the rocks in the distance, staying carefully away from my hide. Some Tree Pies surprised me by their fleeting visits. 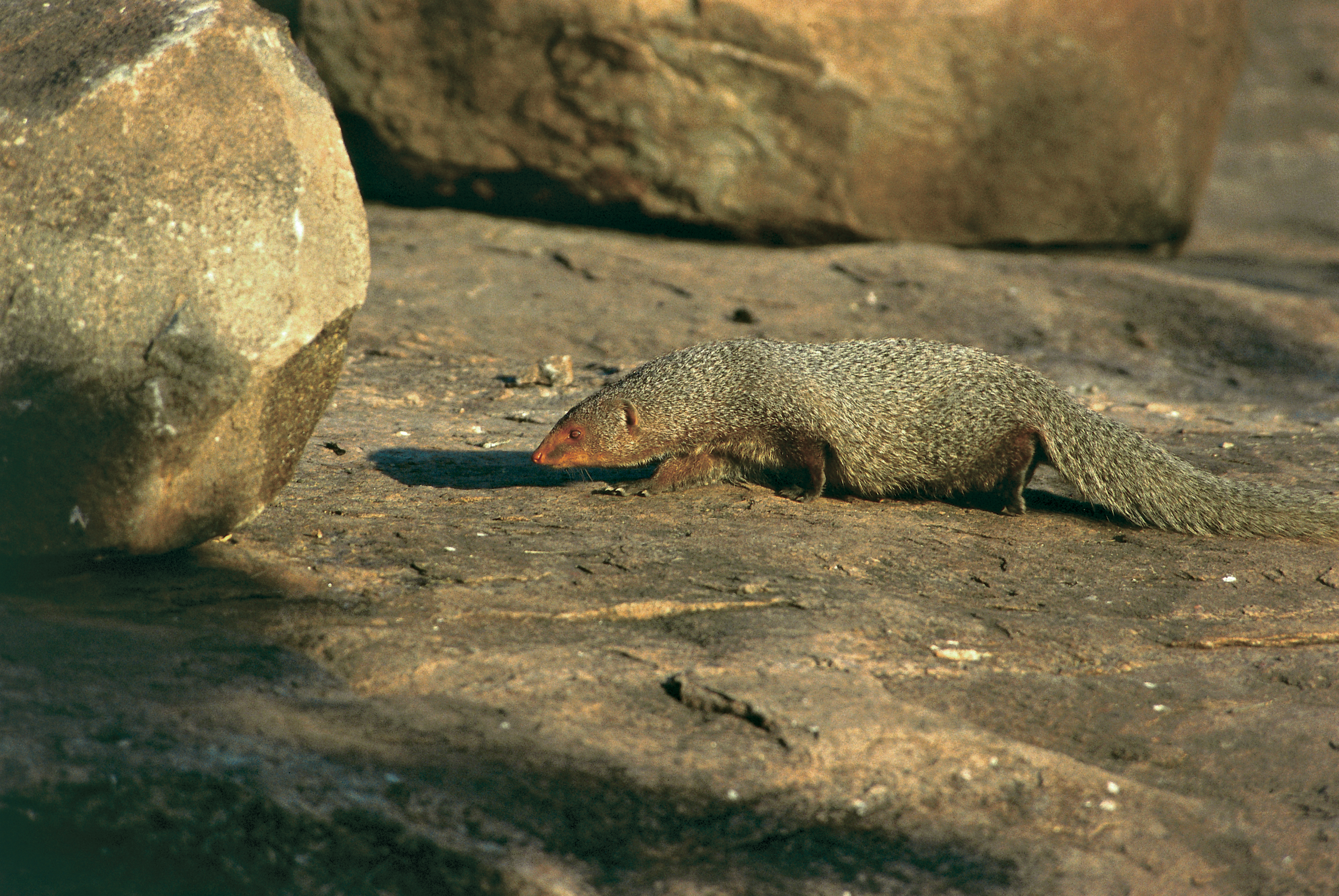 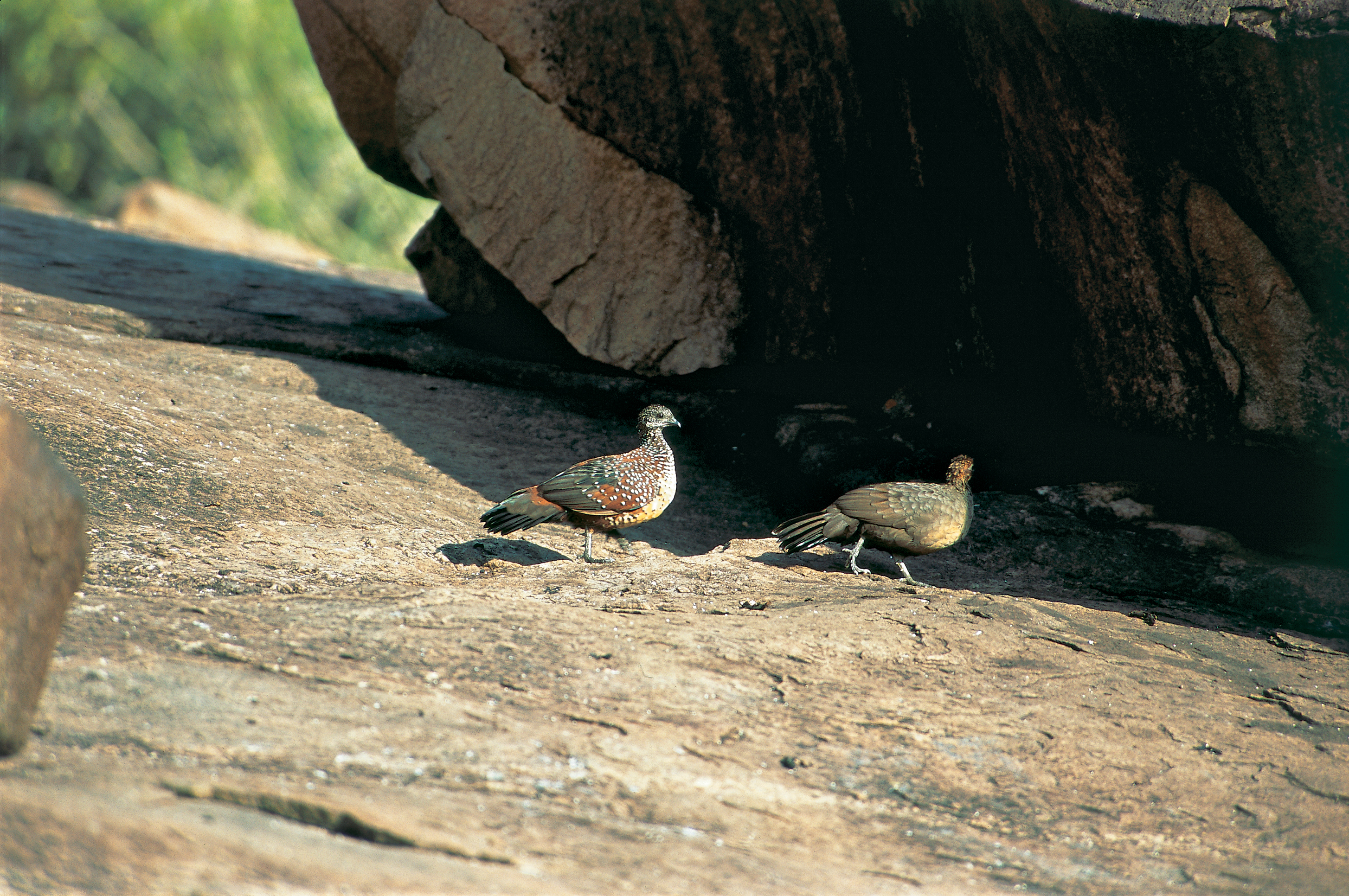 The author also saw the common mongoose and a diversity of birds including the Painted Spurfowl at Daroji. Photo: S. G. Nenighal.

In addition to a remarkable array of avifauna, the sanctuary is rich in other biodiversity. The leopard, wolf, striped hyena, jungle cat, civet, jackal, fox, common mongoose, wild boar, porcupine and pangolin can also be found in Daroji and I was unbelievably lucky to see an albino wild boar moving about. Blacknaped hares are ubiquitous and easily seen bounding across the forest roads. Among Daroji’s reptiles is the starred tortoise, rock agama, forest calotes, rock gecko and the termite hill gecko.

Daroji boasts of over 27 species of butterflies, including the common blue bottle, the cabbage white, the crimson tip, the common crow, the common emigrant, the common grass yellow, the grass jewel, the common and blue mormon, the common Jezebel, the pioneer, the sailor, the blue, plain and striped tiger, and the common wanderer. Botanists would delight in Daroji’s collection of rare and endangered Deccan flora.

Wildlifers and conservationists often discount the value of tiny parks such as Daroji. But I believe that these tiny oases offer wonderful opportunities not just to protect ‘lesser’ creatures such as the sloth bear and other biodiversity but also act as educational tools to introduce the public to the wonders of wild India – surely enough reason to protect them. 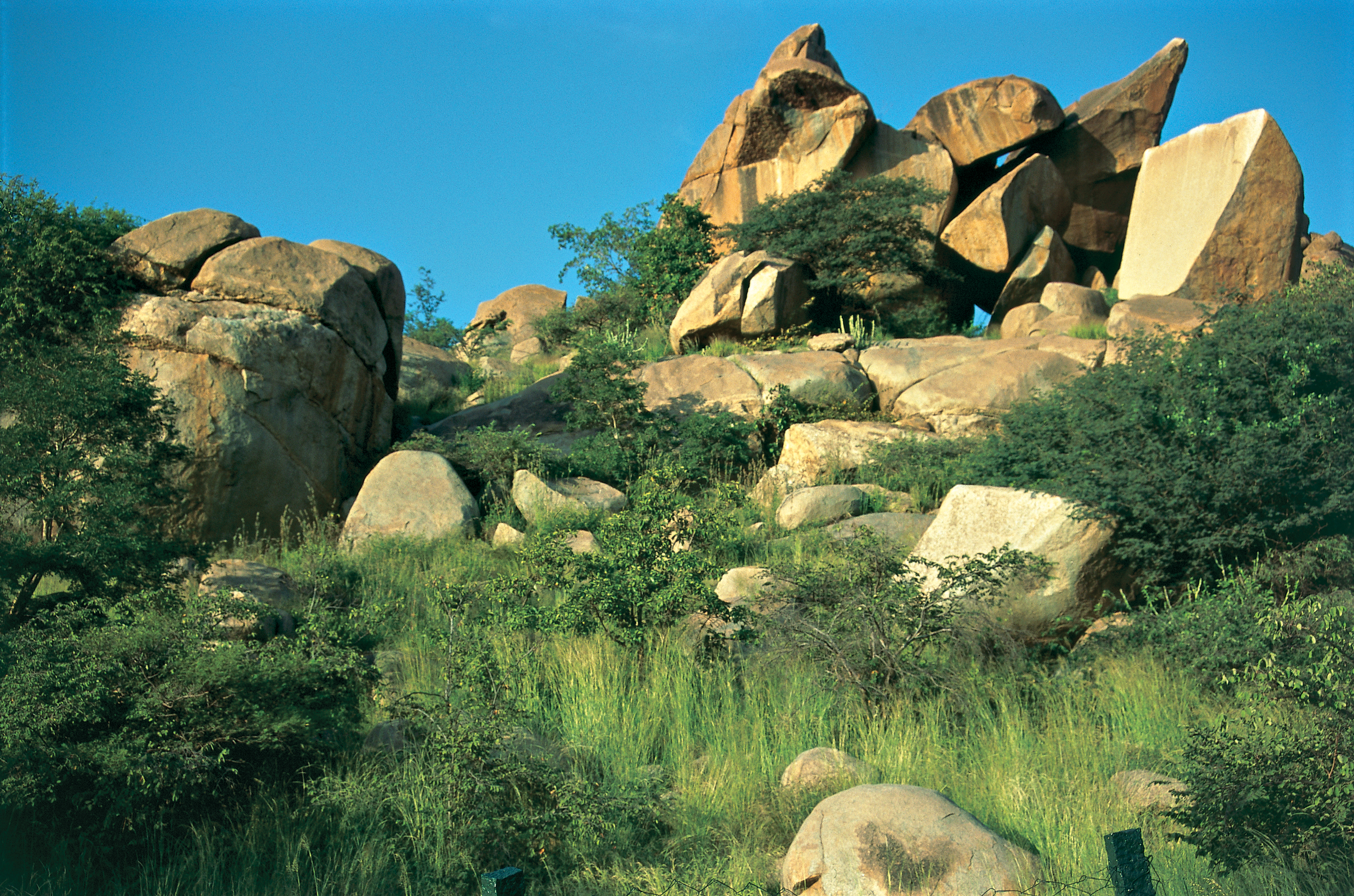 Where and How
The Daroji Sloth Bear Sanctuary is located in the Hospet and Sandur talukas of Bellary district, Karnataka. Situated in the Deccan Plateau, and containing endangered flora and fauna endemic to this region, the sanctuary covers an area of 55.87 sq. km. With an average rainfall of 531 mm., the temperature varies from 43°C in summer to 20°C in winter. The habitat is boulder-strewn, degraded scrub forest covered with undulating hillocks rich in iron and manganese. Typical xerophytic vegetation grows where it can. One can travel to Hospet by train or bus from Bangalore, Hubli and Hyderabad and from there proceed by road to Kamalapur, which is just 15 km. from the sanctuary.
A Sanctuary for Sloth Bears
The troubled relationship between sloth bears and humans in the Deccan Plateau goes back centuries. Daroji is close to the famous Hampi ruins, a UNESCO World Heritage Site. The vegetation of the area was destroyed during the invasion and destruction of the prosperous Vijayanagar Empire in the 16th Century. After the exodus of the area’s human population, sloth bears moved into the rocky caves among the hills. As the cultivable area was re-settled by people, bears made frequent nocturnal raids on the sugarcane and banana plantations, as well as on the dry crops raised in the sparsely populated villages. These raids often resulted in human-animal conflicts. By the time the Forest Department created the sanctuary for the bears of Daroji in October 1994, these animals were hard-pressed. At present, the conflicts have reduced though some rare cases are reported.

The creation of the Daroji Bear Sanctuary was the first official step taken to protect the endangered sloth bear. This species is still under threat, from habitat destruction, and from poachers who kill mother bears and capture cubs for use in public entertainments. But, as seen from my numerous observations of the species, the sanctuary now boasts of, according to the official census, a very healthy sloth bear population of 120 to 150.
join the conversation