Text and Photographs by Cara Tejpal

It was a casual Facebook message about a decade ago that started my relationship with Dibang Valley.

A lovely young man, who I had met while interning at a prestigious conservation conference a few months prior, slid smoothly into my DMs in January 2012. He asked if I would like to ‘fly east for a few weeks’. Sahil was the prodigy of world-famous tiger scientists, an up-and-coming conservation anthropologist conducting his PhD research. I was a college opt-out tasked with collecting the conference-goers’ room keys to ensure their rooms had been cleaned before lunch. Still, we were close in age, and he had nodded along emphatically when I told him how my heart longed to be ‘in the field’.  My painful sincerity must have struck a chord, because a month later, on the wings of that Facebook message, I flew to Guwahati, then spent 20 hours in rattling buses that took me across the ravenous Brahmaputra river and deposited me in Dibang Valley, Arunachal Pradesh. My backpack was overstuffed, my new Swiss Army knife shiny, and I was blissfully ignorant of how unprepared I was for the two weeks to come.

Dibang Valley humbled me. We walked for hours each day, through forests, across grasslands, and along riverbanks, surveying mammals in the community forests of the indigenous Idu Mishmi people. In the company of three other research assistants—all men, all from the local community—I became excruciatingly aware of my own shortcomings. I walked the slowest, carried the least weight, was the worst at identifying animal tracks, hopeless at kindling the campfire, and halfway through the survey, burnt the laces off my shoes by placing them to dry too close to the flames. At night, alone in my tent, in a ludicrous sleeping bag meant for girls aged 10 to 13, I tried desperately to stay warm, wondering how craven it would be to crawl into the other tent to sleep. 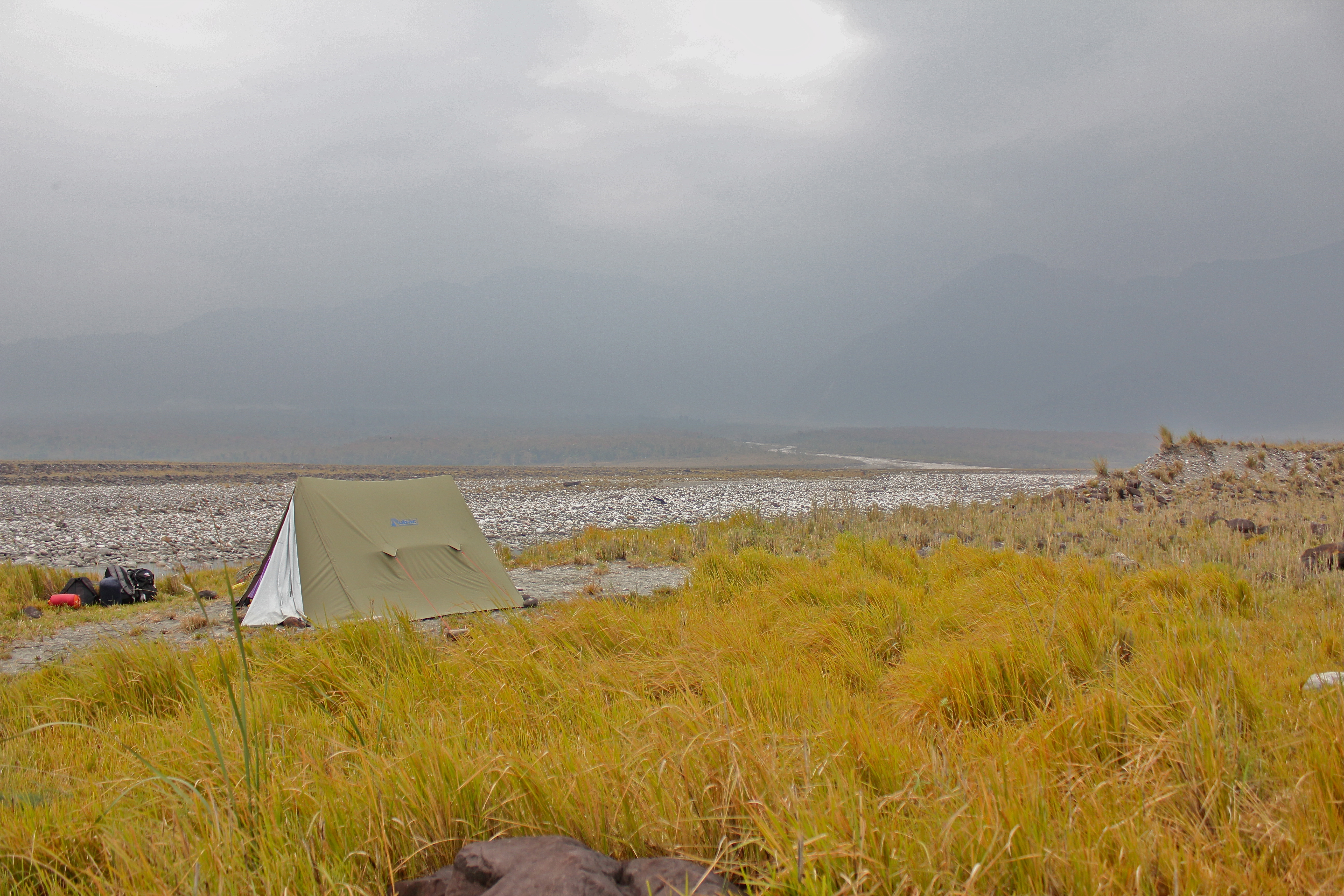 A remote campsites where the author and the team stayed in in 2012 while surveying the community forests of the Idu Mishmi people.

My inner turmoil was in stark contrast to the world before me. I was beyond the edge of civilisation as I knew it, in the midst of a biodiversity hotspot so special it made my heart pound. We rarely saw any wildlife, but knew it was there. We set up camp on hearing the powerful wing beats of hornbills returning to roost, awoke to the dawn call of hoolock gibbons, weathered a storm that brought yowling jackals to our campsite, and one morning, found on the riverbank the perfect damp imprint of a tiger pugmark. It was the first scientific evidence of tiger presence in the valley, though of course the Idu people had always known of it.

My self-absorption at the time didn’t allow me to fully appreciate just how unique Dibang Valley was. I returned to the city, and didn’t visit Dibang again for seven years. In that time, my virtual friendship with Sahil took root, and it was through his years of research and observation that I was afforded a glimpse of the wild enigmas and cultural nuances of this land. 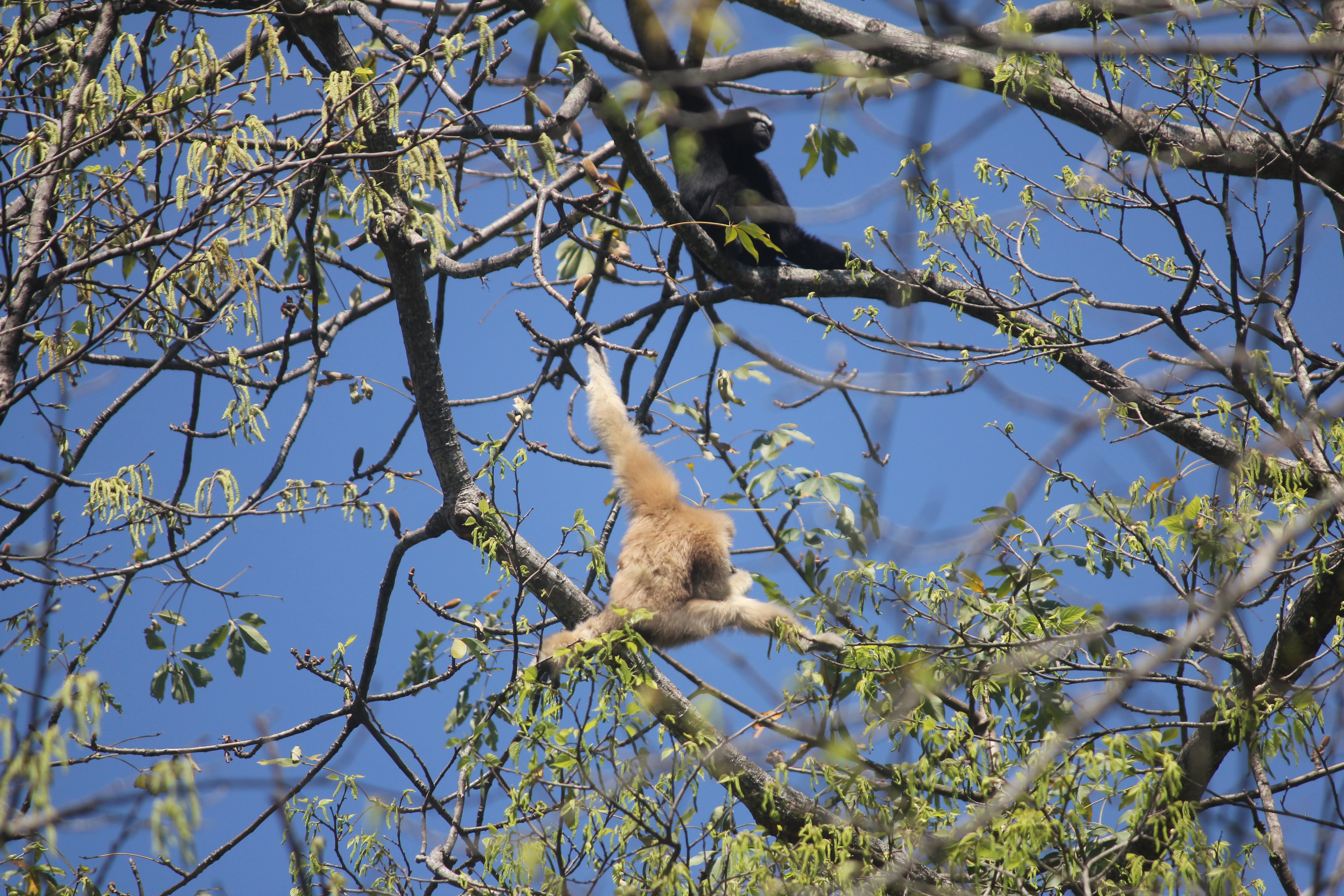 A pair of hoolock gibbons photographed in local farmer Eketo Mendo's land in lower Dibang Valley. Mr. Mendo has preserved a forest island in the middle of his farm for their survival.

Dibang Valley sprawls across 12,000 square kilometres of the Eastern Himalayas. It is home to ancient forests, limpid lakes, gushing rivers, towering grasslands and a jaw-slackening diversity of wildlife: 555 species of birds, 70 mammals, 381 butterflies, 48 amphibians, 47 reptiles, 47 fish so far—with new additions to the records every year.

This abundance belongs to the Idu Mishmi people, a small animist-shamanic community whose unique culture has preserved the integrity of the land and all its inhabitants. There is perhaps no better testament to the superiority of Idu land management than the scientific study that found a much higher diversity of wildlife in their community-managed forests than in the government-notified and ‘protected’ wildlife sanctuaries. Idu life, you see, is governed by cultural taboos on forest-use and hunting that are intertwined with Idu mythology. These ritual restrictions, known as ‘Iyu-ena’, are observed across the gamut of socio-cultural activities ranging from birth to death. They can include abstinence from sexual activity, crossing rivers, drinking alcohol, weaving yarn, working in the fields and hunting. In fact, according to Idu mythology, the first Idu and the first tiger were born from the same mother, and Idu society altogether prohibits the hunting of wild feline species. 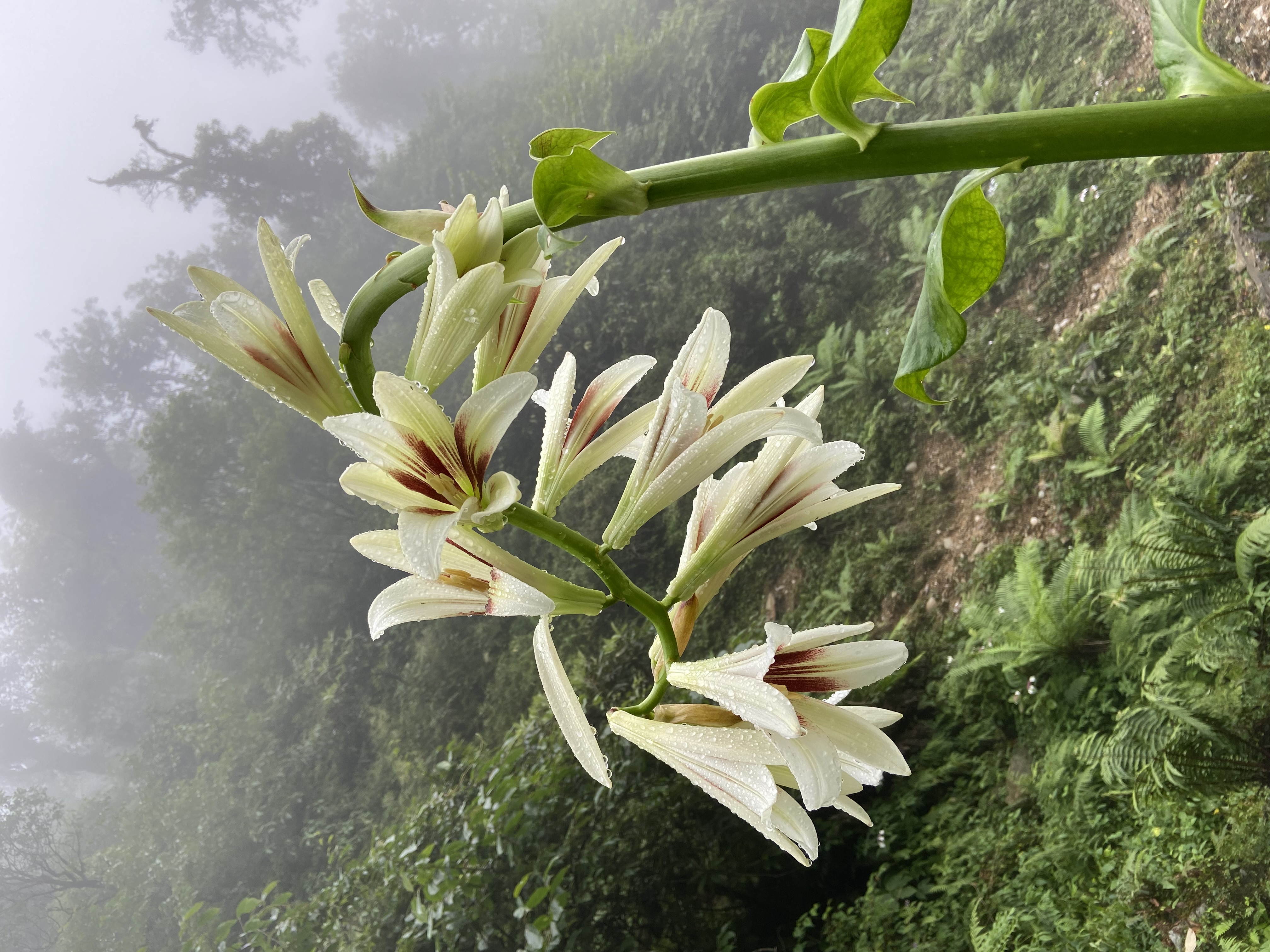 The stunning Giant Himalayan Lily towering over other wild flowers in the monsoon mountains of Dibang Valley.

I cannot profess any expertise on Idu culture, but I do know that this animist society has done a better job of wildlife management and conservation than many of the authorities that are considered scientific and modern. I rarely question my own fidelity to west-centric science, and have always expected conservation management and solutions to rest solely on data and research. But my relationship with Dibang Valley gave me pause and forced me to reassess. Our ‘modern science’ that’s so damn aware of the exact implications of fossil fuel extraction, mining, pollution and deforestation, has failed to convince us to act with restraint. Yet, in Dibang Valley, its cultural ethos has enabled a community to keep wild ecosystems intact. The message that human well-being is inextricably linked to restricted forest-use has been better delivered and honoured by Idu culture than by modern science and mainstream society.

It’s July 2021. I am sitting in a small room on a mountainside by the Eze river, watching images flash across a cloth screen. Around me are my colleagues—Sahil, yes, but also 15 young Idu men and women who comprise the Dibang Team, a collective that is working to conserve the natural and cultural bounty of the Idu homeland. On the floor before us are stacks of camera traps, and we are going through the thousands of images that these have captured over the past month. A collective gasp flutters across the room every time a camera coughs up an exceptional picture. We are witnessing the hidden lives of some of the country’s rarest, most secretive inhabitants. A clouded leopard padding softly across the forest floor, a red panda strolling the length of a bough, a pack of dholes in military formation, a golden cat patrolling his territory, a glorious tigress with her two rambunctious cubs, a herd of Mishmi takin on a high ridge...  I savour the plenitude of Dibang Valley with my friends, and laugh at humanity’s search for future idylls when such places already exist.

Pain, loss and doubt are as essential to the human condition as joy, love and wonder. Idu society isn’t homogenous in its aspirations—no society is—and it would be unbearably patronising of me to romanticise or tokenise Idu culture, or to dismiss the very real concerns that Idu people face. No, I do not want to do that. What I want is for us to see the possibilities in the natural and cultural landscapes that persist on this planet. The Dibang Valley, like so many homelands managed by indigenous peoples across the globe, is threatened. There are 17 mega hydropower projects planned on the eponymous Dibang River and her tributaries. Each one is superfluous and controversial, but already, vast tracts have been razed and false promises made to those whose lands will be consumed. 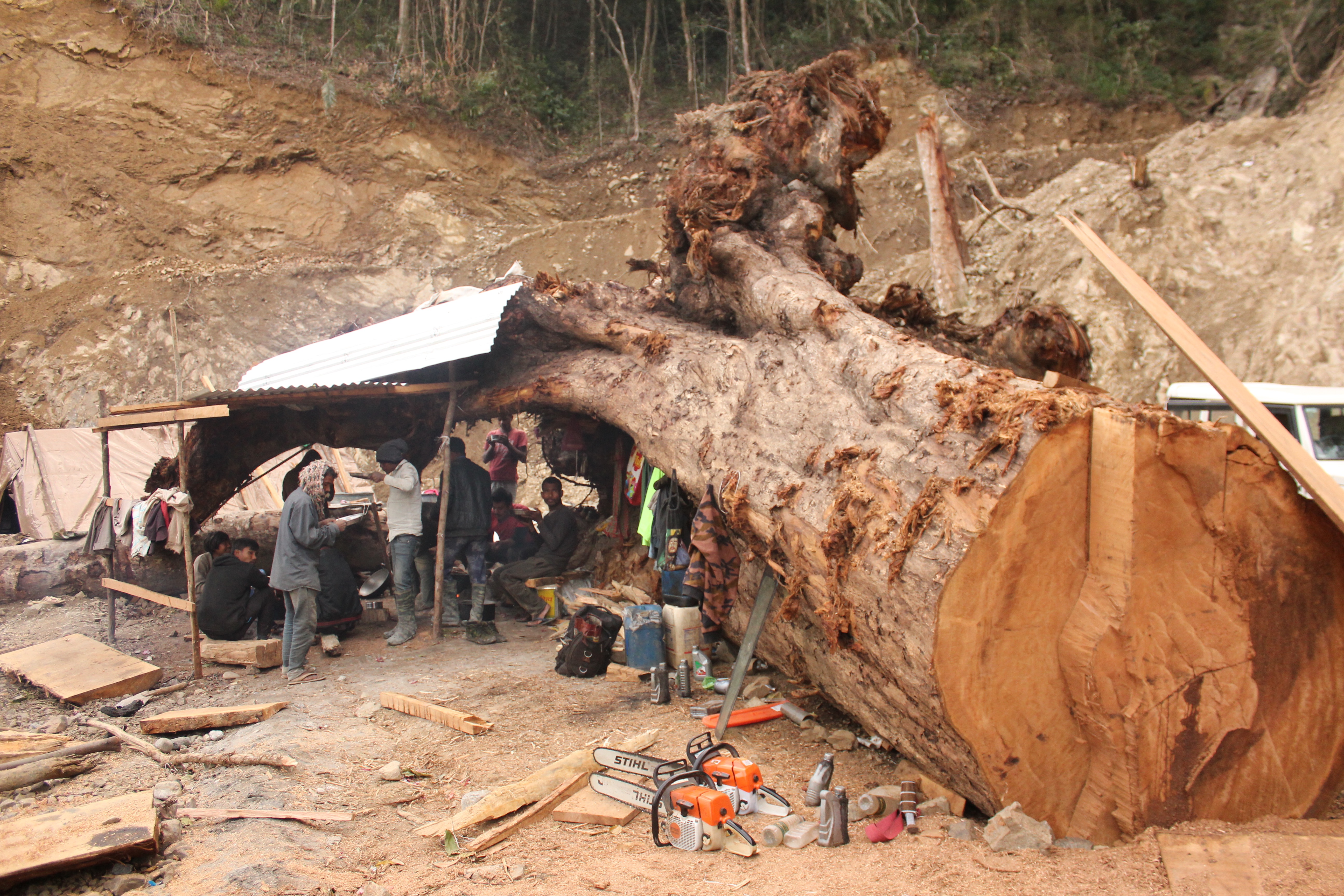 Daily wage migrant workers sip tea under the shelter of an ancient tree, felled for one of the many development projects proposed in Dibang Valley.

My colleagues in the Dibang Team are now working with customary landholders to explore the potential of demarcating select sites in Dibang Valley as Community Conserved Areas.  These areas will be recognised by governments, governed and owned by the community, and be beneficial to all life forms, human or otherwise. My editor asked me for a column on an imagined utopia, but I cannot see beyond our existing Edens—sacrosanct landscapes that cradle the possibility of a kinder, more equitable world.

This essay first appeared in Issue 02 of The Irregular Times .