Ghosts At The Top Of The World

Text and photographs by Shreekant Somany

Enroute to Komic, our driver Tsering Lara, drove off-road for a short distance to a vantage point, from where we scrambled down a slope near a nullah (stream) where a snow leopard had made a donkey kill. We could see a flock of Griffon Vultures awaiting their pound of flesh – a sure sign that the leopard was still there! I was yet to acclimatise to the thin air and stopped a while to catch my breath. Then almost like magic, there before me was our quarry, an elusive snow leopard. Silently as I could, so as not to disturb the cat, I took my trusty Canon 100-400 mm. (crop factor 1.6) in hand and managed to shoot off a few frames, before the magnificent cat melted, ghost-like, away into the gorge.

For me a long-cherished dream had just come true. As I sat, digesting the experience, I gazed around me at the vast wilderness, and could see why these, the world’s most elusive large cats, preferred to live solitary lives, hunting and patrolling their territories solo, across ranges that could extend to 1,000 sq. km.

I had been to Ladakh earlier, drawn by the grey ghost in the mid-winter of 2015 when I visited the Hemis National Park with Rahul Ogra, snow leopard conservationist and founder of Mystic Himalayan Trails. That year we spent four magical nights at Ulley village, but the snow line was higher and the cat did not descend lower in pursuit of prey. We were disappointed but learned later that even a British Broadcasting Corporation (BBC) team camped in the park for three weeks that year had to return without a sighting.

From Kullu to Kaza

Still in search of the snow leopard, five years later, toward the end of 2020, I chose to visit Himachal Pradesh’s Spiti Valley, home to around 30 snow leopards. The hill panchayat had sensibly limited the number of travellers to follow COVID-19 precautions. Possibly it was the reduced disturbance that gave the good fortune of actually spotting the grey ghost that I described at the start of this article. Clearly, I had made the right choice by honing in on Kaza as my base, rather than Langza. Almost everything had begun falling in place, even before I arrived. The weather forecast, for starters, had predicted clear skies I could see above me! Shrikant Baldi, former Chief Secretary, Himachal Pradesh,  had arranged the circuit guesthouse for our stay. I took off for Kullu on January 25, 2021.

After a day’s rest in Manali, I boarded the Bell 407 chopper at 8.30 a.m. and looking out of the window I could see majestic snow-clad Himalayan massifs. A short 30-minute flight saw us across the Rohtang Pass and Kunzum La, and then we were at Kaza where we were greeted by the Aide-De-Camp (ADC) Kaza Gian Sagar Negi, my guide Tsering Lara, and the local doctor. The circuit house where we camped was a mere stone’s throw away.

Kaza, the sub-divisional headquarters of the Spiti Valley, lies at 3,700 masl. With a largely Buddhist population of around 12,000, far from the hustle, bustle and stress of urban life, the local economy here is supported by farming and low-impact tourism (homestays and transport services). In this well-balanced society, we found neither extremely wealthy nor impoverished residents.

Despite the exquisite blue skies above us, the temperature was a bone-chilling -160C outside, but our room was warm and snug, and I slept a dreamless sleep that night. I woke to a breakfast of aloo parathas, aachar and black coffee, after which I took some well-advised rest, and took off post-lunch in Lara’s Toyota Innova to Komic, the world’s highest (4,587 masl.) motorable road. Lara’s advance team of six trackers, equipped with walkie talkies, had positioned themselves at selected locations to report any sightings. Driving along roads that wound their way through barren, snow-clad mountainscapes, far below us we could see the exquisite Spiti river, the lifeline of the valley, glinting like a jeweled necklace in the bright sunlight. 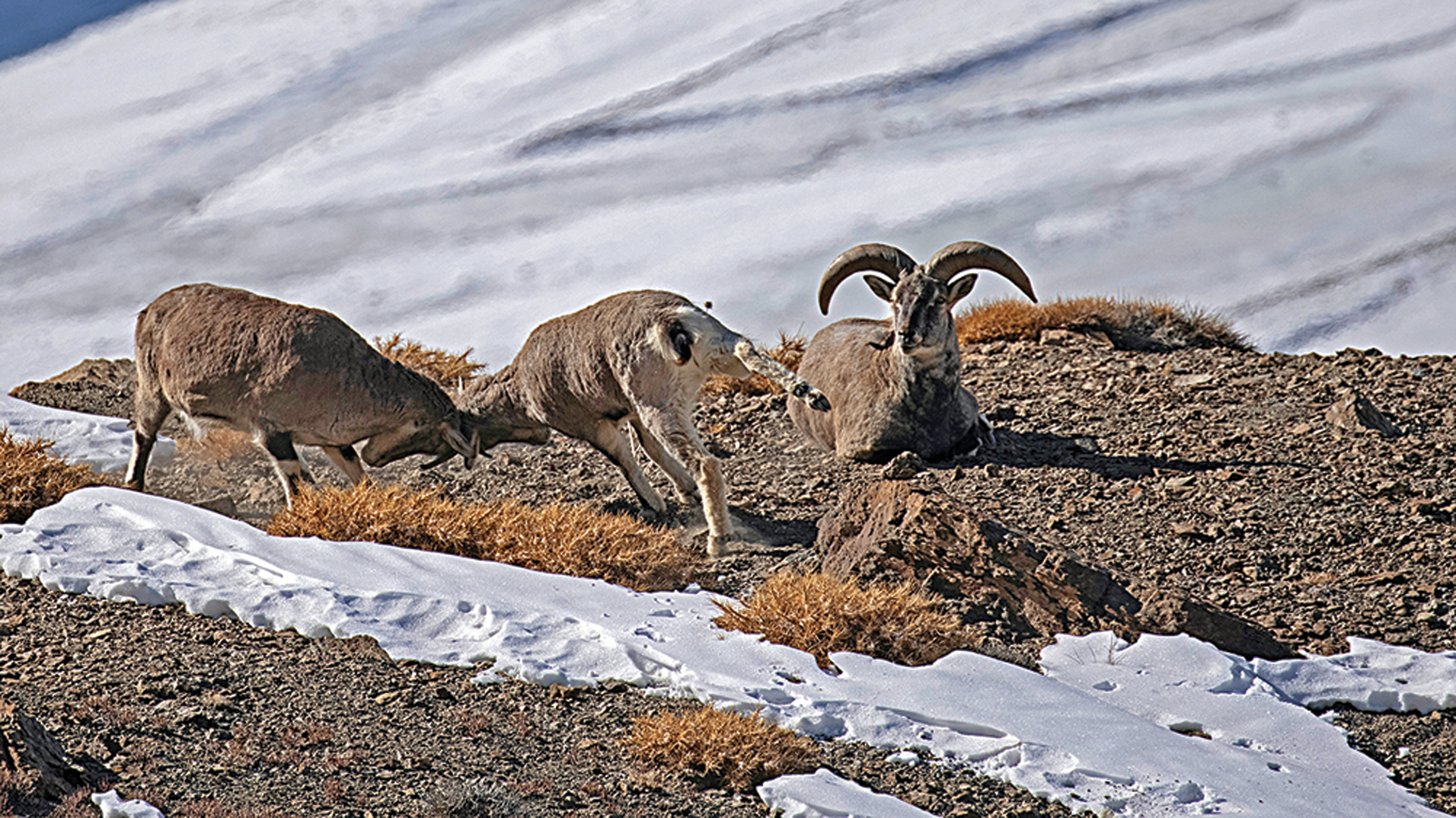 Blue sheep or bharal are fleet-footed and agile mountain climbers. Adult males have an impressive set of horns, which are used to challenge other males competing for mating or territorial rights.

Panthera uncia is the ultimate symbol of transboundary conservation. The cat occupies a vast territory in the Himalaya extending from India, Nepal and Bhutan to the central Asian mountains of Kyrgyzstan, Afghanistan and parts of Russia and Mongolia. It prefers the most inaccessible habitats, above the tree line, up to 5,500 masl. Here it roams freely across 13,000 sq. km., relatively safe from poachers, thanks to the inaccessible terrain and effective conservation actions involving locals.

Enroute to Komic, we had spotted groups of blue sheep, or bharal, vital prey for the snow leopard. I would, of course, never have been able to spot the snow leopard if not for the locals who shared its high-altitude home and knew its ways. Living solitary lives, snow leopards generally hunt and travel solo, with a cat’s range extending as far as 1,000 sq. km.

It was late afternoon when we headed back for Kaza. The midday sun bathed the landscape in a vibrant glow, and on the horizon, the moon was in ascent. What a good day it had been!

We set off at 9 a.m. the next morning. It was a bright, sunny day and my first stop was the thousand-year-old Key Monastery, the largest training centre for Lamas. Founded by Dromton, a disciple of Atisha, a Buddhist leader of the 11th century, the monastery was pillaged by Mongol invaders and ended up being rebuilt several times down the years. In 1840, it was ravaged by a large fire and more recently, in 1975, it was rocked severely by an earthquake. In 2000, the Kalchakra ceremony was performed in the Key Monastery, in the presence of His Holiness The Dalai Lama.

I was still replaying the snow leopard sighting as we headed back from the monastery towards Kibber. We received news that trackers had spotted the movement of a leopard, but it had drifted away by the time we reached. We nevertheless walked about for three kilometres through thick snow, in the hope of catching a glimpse of the cat. No such luck! We did see a herd of Himalayan ibex scouring the ridge for food some 500 m. from the road. By now it was close to midday and we chose to move on towards Kibber and Komic. A few kindly monks offered us some hot dal and roti, which we gratefully accepted, happily abandoning the cold-packed lunch we had carried with us.

We were not really looking for another snow leopard sighting, but we still waited for a couple of hours to get an update from the trackers scouring the surrounds. At 3.30 p.m., we heard the crackle-buzz of the walkie talkie. “Come to Hikkim! A mother and two cubs have been spotted.” Hearts pounding, we rushed to Hikkim village, which proudly operated the highest post office in the world. Just beyond the village boundary, we stopped and walked down slope to the edge of the ridge. And there they were, as though waiting for us! A mother and her two cubs were lounging about in the snow without a care in the world, across from where I had set up my tripod. Females bring up and protect their cubs without any help from males, until they are around 18 months old. 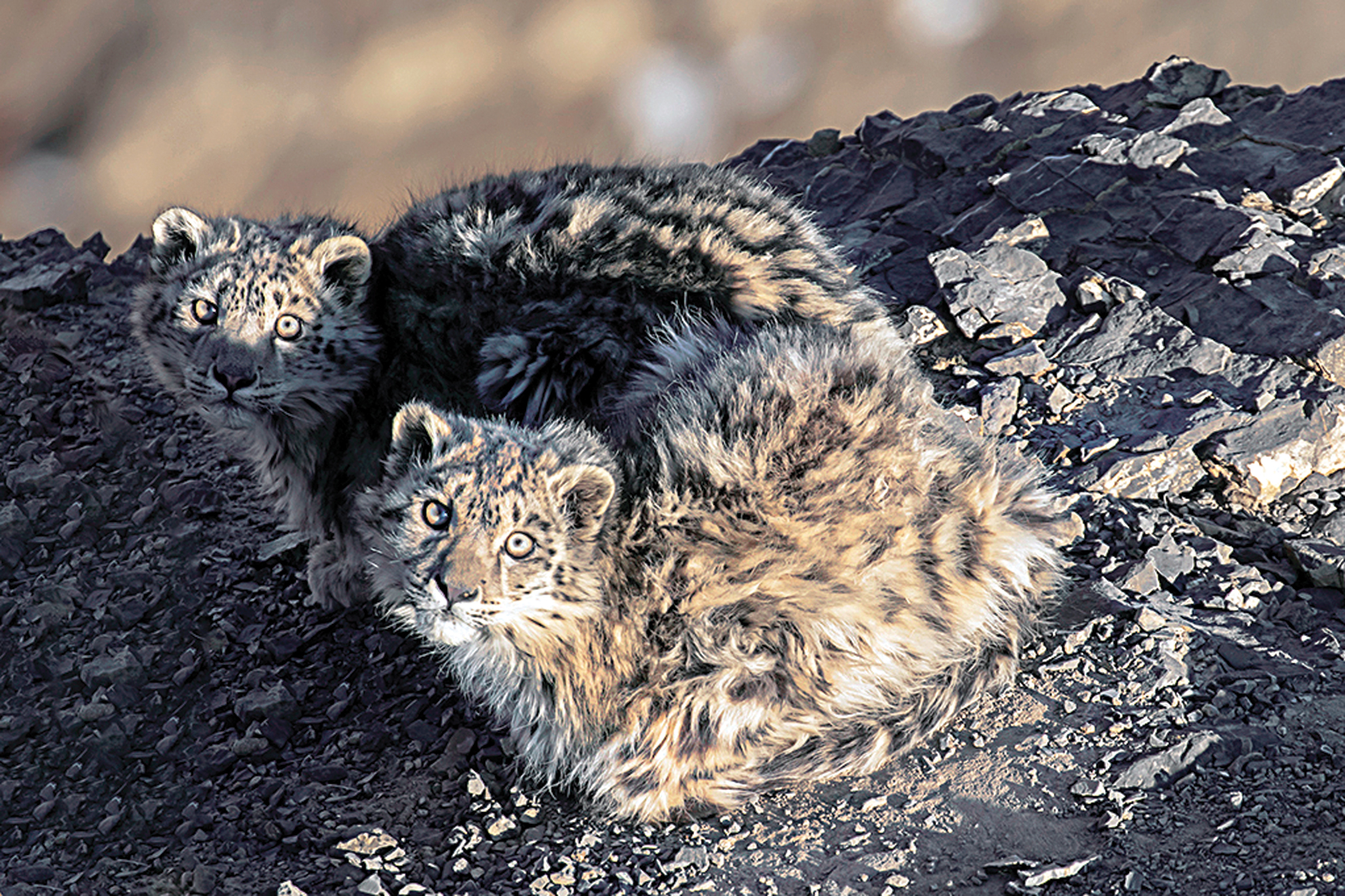 Snow leopard cubs are born during the summer months of June and July, after breeding season in winter. For two to three months, they stay relatively hidden in caves or other safe places, then follow their mother around for two years before separating to lead solitary lives.

I watched in disbelief at the three cats bathed in the golden rays of the setting sun. Transfixed, I mechanically set up my camera, capturing every movement of the trio over the next hour, until their mother led them away.

On January 29, at 8.30 a.m., the chopper transported me back to Kullu. Looking out of the window, I wistfully stole a last look at the majestic Himalaya where creatures roamed the Earth long before humans became the humans we now are.

My trip left me wondering, as I do time and again, how anyone could hunt such a stunning animal for its fur and bones. I recalled the powerful, piercing gaze of the famous Afghan girl captured by Steve McCurry in the refugee camp in Afganistan during the war in 1985, her eyes questioning the atrocities on her people. The gaze in the eyes of the snow leopard mother was no different to me – “why do you hunt us?” she seemed to inquire. 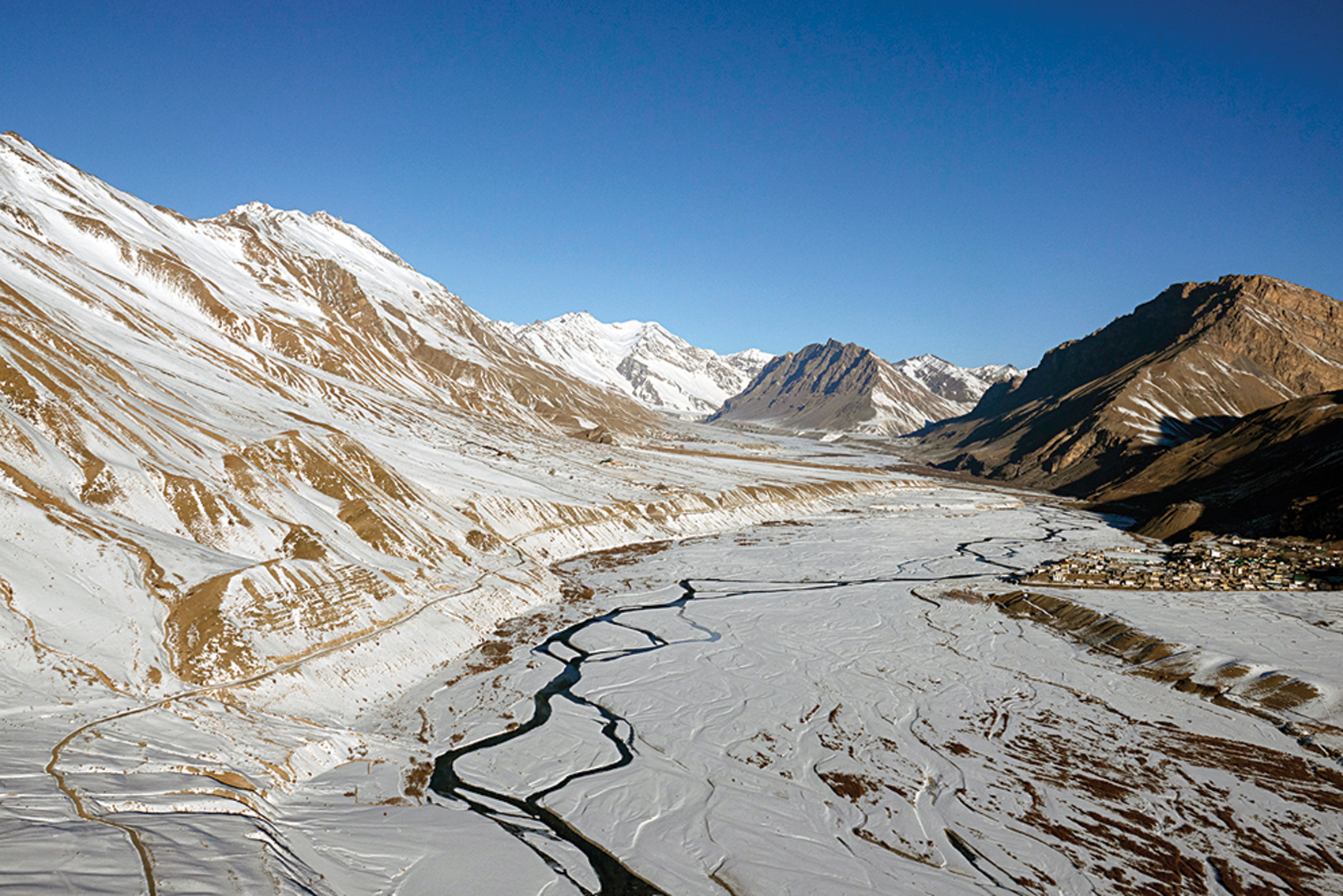 The Spiti valley is the heart of India’s snow leopard cold desert home. The cultural roots of local communities are key to the survival of the cats and towards this end the stunning landscapes and incredible wildlife attract tourists from across the world. Organisations such as the Snow Leopard Conservancy, Snow Leopard Trust and NCF are working to harmonise the relationship between people and the wild species whose home they share.

Spiti valley is a remote, cold desert mountain valley in north-eastern Himachal Pradesh, its terrain peppered with hardy grasses and shrubs. The region is home to a variety of fauna, including Himalayan ibex, blue sheep, snow leopards, Tibetan antelope, argali, kiang, Himalayan brown bear and musk deer. Poaching of wildlife is a persistent issue that plagues the landscape – Tibetan antelope are hunted for the production of shahtoosh shawls, snow leopards for their fur and musk deer for their fragrant pods (see Sanctuary Asia, Vol. 41, No. 2, February 2021). A recent study by the Himachal Pradesh Forest Department and Nature Conservation Foundation (NCF), however, guesstimates that the state may be home to over 70 snow leopards, excluding cubs, a significant rise from the past census. NCF has been working closely with the local community for over two decades to plan and employ an effective conservation strategy in the region and promote a peaceful coexistence between wildlife and people.

An industrialist and presently the Chairman and Managing Director of Somany Ceramics Limited, which manufactures ceramic tiles, sanitary ware and CP fittings, Shreekant Somany is an explorer of the unexplored. Capturing the frames of new heights and new perspectives every day, Somany beautifully brings life to his expeditions with an edge towards technology, a sharp aesthetic sense, and an ever-lasting yearning for nature.