An intrinsic part of The Corbett Foundation, and an invited lecturer at the Royal (Dick) School of Veterinary Studies, University of Edinburgh, Dr. Naveen Pandey, has over two decades of experience with wildlife protection under his belt. A dyed in the wool wildlifer, and a much-respected wildlife expert, he spoke to Ramona Karoor, environmental writer, about his passion and life in Kaziranga. 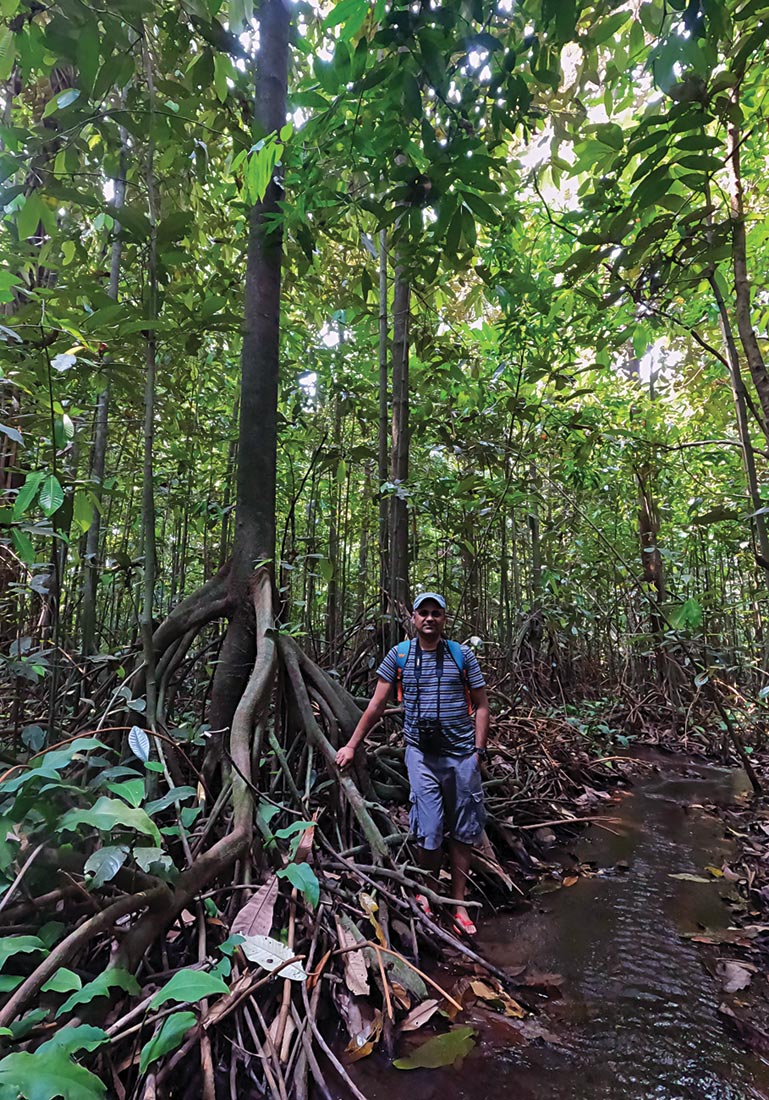 Dr. Naveen Pandey during a visit to a Myristica swamp in Maharashtra’s Sindhudurg district in 2022. He has been documenting India’s natural heritage for over two decades and has written extensively on the resilience of hardy ecosystems like grasslands and wetlands. Photo Courtesy: Reshma Jathar.

How did you come to choose the protection of nature as your purpose in life?

I was born and brought up in Chittaranjan, a locomotive township in Bengal. Green beyond measure, I recall my home town clothed in over half a million trees, and dotted by wetlands. I had a visceral love of nature, which probably started at my family’s bi-annual sojourn to our ancestral village and farmhouse near Bodhgaya.

And, that was your motivation to become a veterinarian?

Yes, I guess so! I graduated as a vet in the winter of 2000, and with the universe’s blessings, my hands have always been full. At the end of my three-year tenure in Kutchh, Gujarat, as a Veterinary Consultant with The Corbett Foundation (TCF) in 2014, I got an offer to manage a chain of clinics run by an animal charity in Bengaluru. TCF simultaneously offered me the position of Deputy Director and Veterinary Advisor in Kaziranga, which I had visited in 2005. I wanted an escape from urban life, and eight years later, the people of Kaziranga have accepted me as their own. My friends here are family, and I am fortunate to be invited to marriages, funerals, and religious ceremonies! This is now my home.

Tell us a bit about your work in Kaziranga?

Actually, it’s not really ‘work’. Kaziranga and its surroundings have changed me. This is now my life, where I feel a sense of belonging… and accountability to India’s rural hinterland and natural heritage. It’s difficult to put into words. I have the freedom to think, innovate, and experiment with an interdisciplinary approach to decision-making, and the opportunity to travel through wildernesses I love across India. 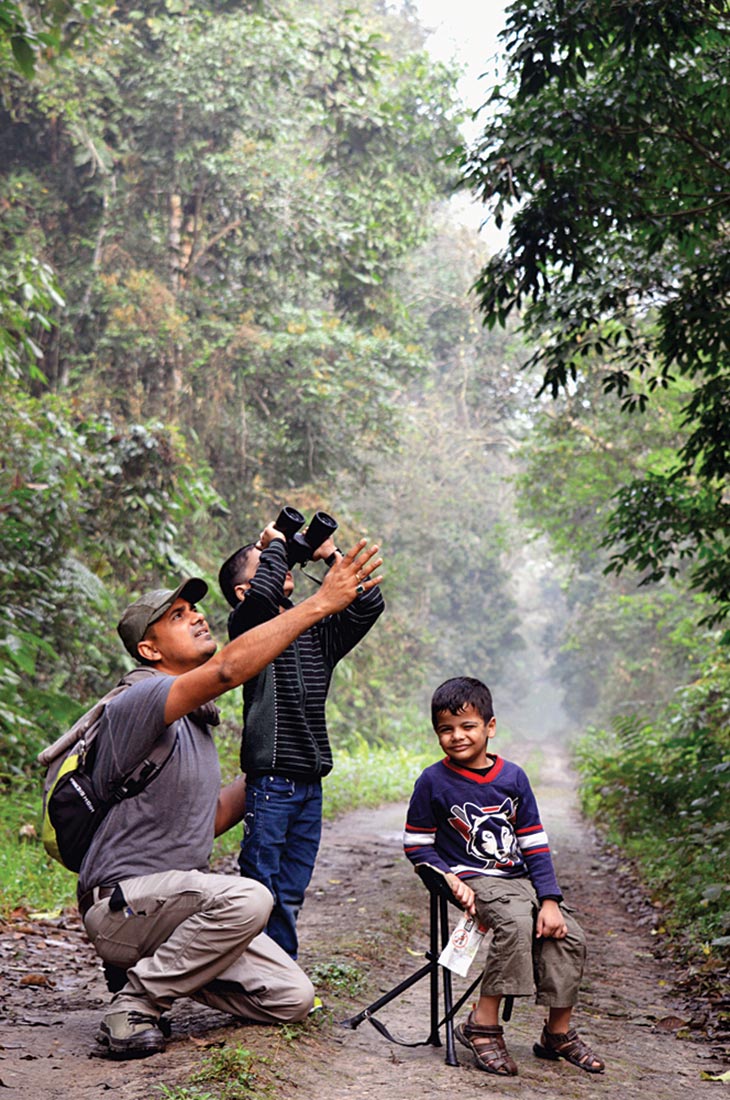 Dr. Pandey’s children, Nalin (12) and Shiven (10), share his passion for the wilds because he has led by example and exposed them to wild nature as can be seen here as they traversed a nature trail when they were much younger in the Hollongapar Gibbon Sanctuary. Photo Courtesy: Jadumoni Goswami.

I do believe so! It was built by the passion of our Chairman, Dilip Khatau, and continues to be consolidated with every passing moment by professionals from seemingly divergent schools – vets, social scientists, and ecologists. Learning is always on the platter. As is the continuous mentoring by seasoned conservationists and writers including Dr. A.J.T. Johnsingh (Sanctuary Lifetime Service Award 2005) and Dr. Asad Rahmani. TCF allows us all to grow in our own special ways. I am also fortunate to be an invited lecturer at the University of Edinburgh for their Ecosystem Health and Species Conservation course.

Fascinating! Tell us more about TCF.

Well, its mission statement tells it all… coexistence between humans and wildlife, which covers almost all aspects of conservation. Working at the interface of human-wildlife-livestock interaction is not easy, but that holds the key to the long-term success of almost all conservation efforts in India. As for Kaziranga, it is a floodplain territory, and is blessed with unparalleled biodiversity and ethnic diversity. The Kaziranga National Park and Tiger Reserve authorities need all the support they can get, and TCF offers this in the shape and form of constructive collaboration as partners with a common mission. We see the strengthening of park management and the care of field staff as part and parcel of our purpose. 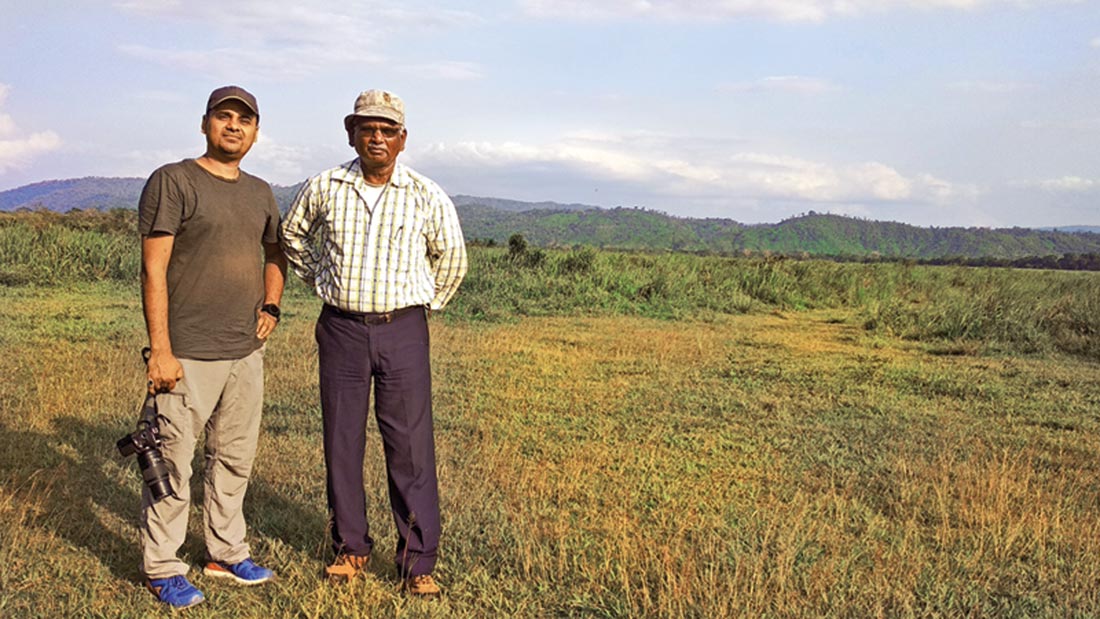 Dr. Pandey refers to Dr. A.J.T. Johnsingh as his ‘Natural History Guru’. This image, taken in Kaziranga in 2018, is one of hundreds taken as the pair traveled extensively to wildernesses such as Kanha, Bandhavgarh, Corbett, Dandeli, Satpuda, and other lesser-known Indian forests. Photo Courtesy Dr. Naveen Pandey.

It is a lot, but then we work collaboratively and many hands do make short toil! There are 74 villages around Kaziranga with a combined population of around 65,000 people. Immunisation of livestock in these villages against infectious diseases including foot and mouth disease (FMD), haemorrhagic septicemia (HS) and black quarter (BQ) is one key joint-operation we implement, in tandem with the park management.

Few people know that Kaziranga supports one of the densest tiger populations in the world. We, therefore, also work to minimise human-tiger conflict through modified cattle sheds in collaboration with the Van Tienhoven Foundation, Netherlands. There is more. To reduce human-elephant conflict, TCF is supported by the Hem Chand Mahindra Foundation, and the International Elephant Foundation, U.S.A., to create and man lookout points. These are equipped with powerful lights to track and dissuade elephant herds that come too close to villages. 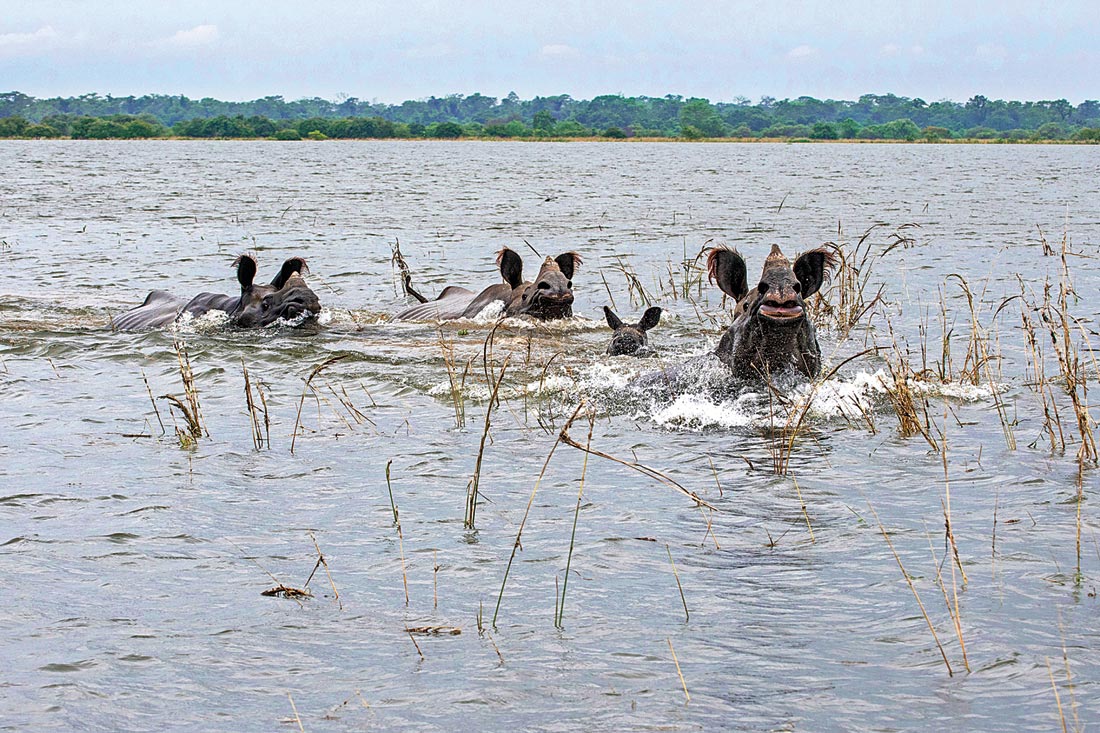 The normally life-giving annual floods in Kaziranga have seen a rise in intensity and frequency over the years. The hydrology of the Brahmaputra river has been adversely affected by linear growth along  Kaziranga’s southern boundary. This has put the lives and the very future of wild animals, that could once easily escape the floods, at grave risk. Dr. Pandey calls for consultations with local communities to win their support to ensure safe passage for stressed wild animals during the monsoon. Photo: Rajarshi Banerji.

I suppose this gets worse during the annual flood season?

The park recently added an area of 900 sq. km. said to include nine additional wildlife corridors?

In truth, there are no ‘additional’ wildlife corridors. Historically, Kaziranga’s grasslands and the adjoining forests of Karbi Anglong constituted one single ecological unit, together with large tracts of forests that facilitated unfettered animal movement between Kaziranga’s lowland plains and its adjoining highlands in Karbi Anglong. This enabled wild species cope with the floods, that are in fact vital to the health of Kaziranga. This continuity has, however, been steadily disrupted down the years. Developments along the NH 715 led this vital continuity to be eroded, leaving behind barely usable identifiable passages that we now call corridors. Yes, nine such ‘corridors’ have been identified, but these are merely the remains of the huge forested complex that once existed. That said, three of these extant ‘corridors’, Amguri, Haldibari and Panbari, are critical to the park’s survival, together with the Kaziranga-Burachapori river corridor.

National Highway 715 bisects the wildlife corridor between Kaziranga and the Karbi-Anglong Hills. What about the proposal to build an elevated flyover highway in three segments of 35 km.?

The flyover highway approved by the state government has also been cleared by the central government with a budget of over Rs. 6,000 crore, though approval from the Ministry of Road Transport and Highways is pending. Post their approval, it would be sent to the Ministry of Environment, Forest and Climate Change, and the National Board for Wildlife. The highway follows the alignment recommendations of the Wildlife Institute of India. I suggest caution and thorough due diligence as hydrological adventures of the dreaded Brahmaputra river, livelihood and aspirations of locals and ecological succession processes need to be considered. With increasing population, businesses and upward linear growth, the safe passage of wild animals is under serious threat throughout the country’s Protected Areas. P. Sivakumar (IFS), the Former Director of Kaziranga National Park and Tiger Reserve, calls for an integrated approach to keeping the corridor’s functionality intact and for an elevated flyover. He stresses that if corridors are not kept free from encroachments, the purpose of the flyover will be defeated. The flyovers in the proposed tract are not meant for improving the driving experience, but for allowing safe passage of wild animals. 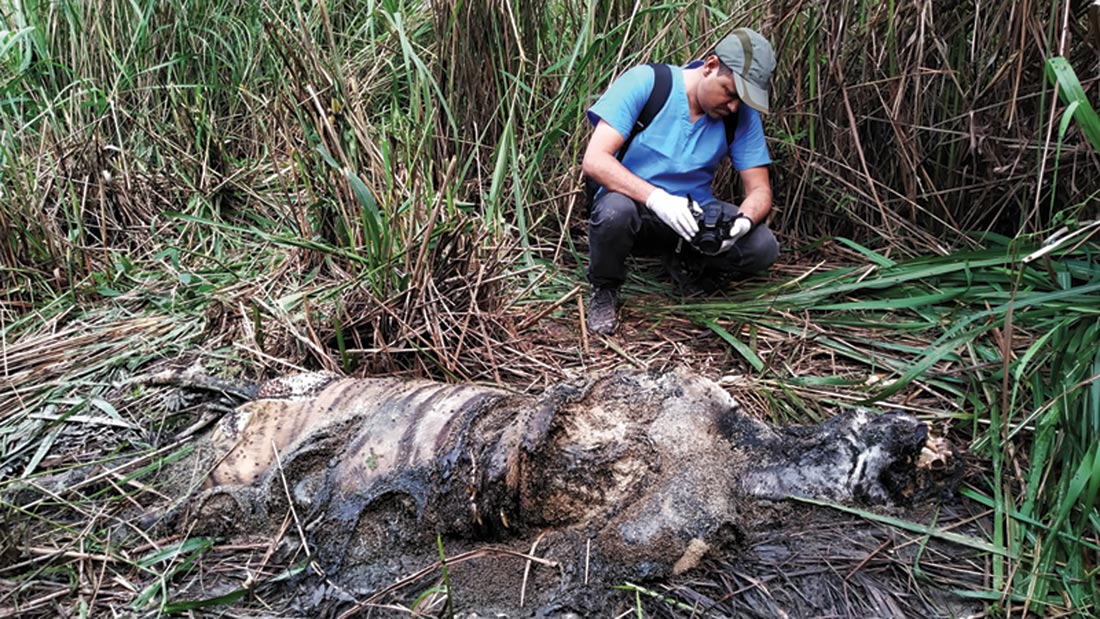 Dr. Pandey is an ardent follower of the One Health approach, and recommends surveillance and monitoring of diseases at the wildlife-livestock interface. He routinely helps NTCA-guided post-mortem examinations of tigers and emphasises the critical need for mandatory post-mortem guidelines to investigate the deaths of other wild animals too. Photo Courtesy: Jadumoni Goswami.

Clearly Kaziranga’s success has much to do with cooperation between the authorities, and also between NGOs working towards the goal of protecting Kaziranga.

Absolutely, yes! G. Areendran and his colleagues at WWF-India, for instance, used high resolution satellite images between 2002 and 2013 and clubbed these with ground truthing through field surveys and camera trap-based monitoring to understand the nature of anthropogenic disturbances. Their observations revealed that the free movement of wild animals was being severely pinched. Additionally, increased vehicular movement and a slew of new commercial establishments have further exacerbated this unfortunate state of affairs.

Has there been no help from the courts?

Yes, the judiciary is aware of the issues. Following the National Green Tribunal’s 2015 order instructing the park to ensure fixation of sensor operated automatic barriers at animal corridors, the park established an Automated Animal Sensor System (AASS) at the Malini crossing point on NH 715, at a pilot site that included a video surveillance room. This mix of technologies proved effective for the intended purpose. By 2021, six additional such systems have been put in place along the highway. 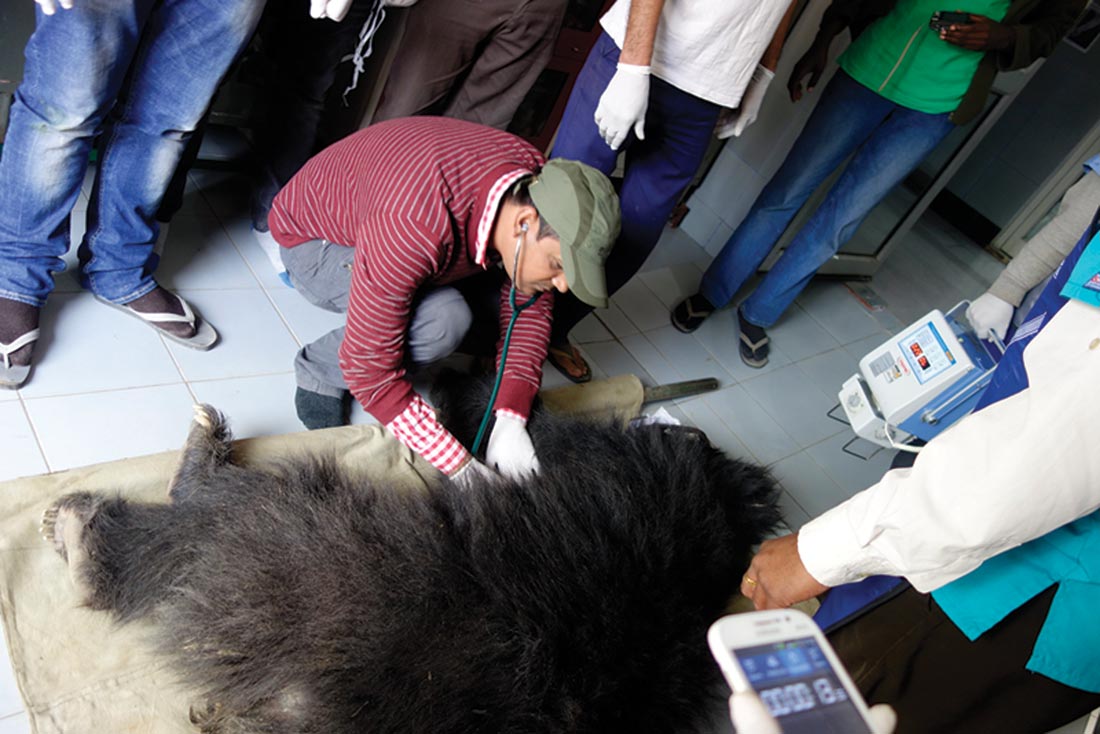 A strong supporter of capacity building and training, Dr. Pandey believes that investments in skill development, exposure visits, and advanced training modules will greatly improve the quality of veterinary services. He is seen here at one such fieldwork course titled ‘Interventions in Wild Animal Health’ at Agra, conducted jointly by the Zoological Society of London, the Wildlife Institute of India and the University of Edinburgh, way back in 2016. Photo Courtesy:  Dr. Naveen Pandey.

It must be difficult to monitor all this in real time?

No one can do the monitoring alone, it’s a combination of eyes and ears. Rohit Choudhary (Sanctuary Wildlife Service Award 2018), an RTI activist known for his dogged perseverance in securing wildlife corridors, has been knocking at the doors of the judiciary with specific instances of evidence of non-compliance with court’s orders. In October 2021, the Supreme Court’s Central Empowered Committee (CEC), directed the Assam government to remove all illegal constructions in and around Kaziranga National Park and Tiger Reserve. Local newspapers, subsequently, were full of the news, and pointed out that some political heavyweights continue to try and build new constructions in the corridor areas. However, India is a democracy and every agency has faith in the law, which will take its course and hopefully deliver the justice that is needed.