The Wildlife Crime Control Division (WCCD) of the Wildlife Trust of India (WTI) believes that as many as 1,00,000 mongooses are victims of the illegal wildlife trade industry every year -- for their hair.

As many as 50 mongooses are slaughtered to produce one kilogramme of pure mongoose hair, used in the manufacturing of paint brushes and makeup brushes. WTI estimates that, for about 150 kg. of mongoose hair, at least 6,000 mongoose are killed every year. Mongooses are a Schedule-II (Wildlife Protection Act, 1972) protected mammal. According to Indian law, the hunting, possession and trading of any of the six species of the mammal found in the subcontinent is punishable with up to seven years in prison. The most frequent victim is the most commonly found subspecies – the Indian grey mongoose Herpestes edwardsii edwardsii.

These statistics were born of a campaign undertaken by concerned artists, volunteers, the Wildlife Welfare Association (WWA), the Wildlife Crime Control Bureau (WCCB) and WTI, which dug deep into this disturbing trend, raiding factories, warehouses and shops across six Indian states. Operation Clean Art was vigorously run by a dedicated team that confiscated a staggering amount of mongoose hair in late 2019. On October 24, 2019 alone, on its 28th raid, the operation seized 54,352 paint brushes, 113 kg. of mongoose hair and arrested 43 people.

Realising that most artists were completely unaware of the dark history behind their tools of trade, some artists involved in the operation felt that raids alone wouldn’t solve the problem. Awareness had to be raised among a larger audience, and the industry had to be cut off by shutting down the demand. And so, the collective Artists With Animals (AWA) was conceived.

AWA launched the ‘Say No to Mongoose Hair Brushes’ campaign in 2019, seeking to convey its message to artists across the country through eye-catching posters that revealed the gruesome backstory of how these brushes are made. They also created awareness on how to differentiate between mongoose hair brushes and artificial hair brushes – while the latter appear glossy due to the presence of nylon, mongoose hair brushes look more matte, and are characterised by their graded colours. The tips of mongoose hair brushes are dark brown, fading down to a creamy beige, turning dark again at the ends. 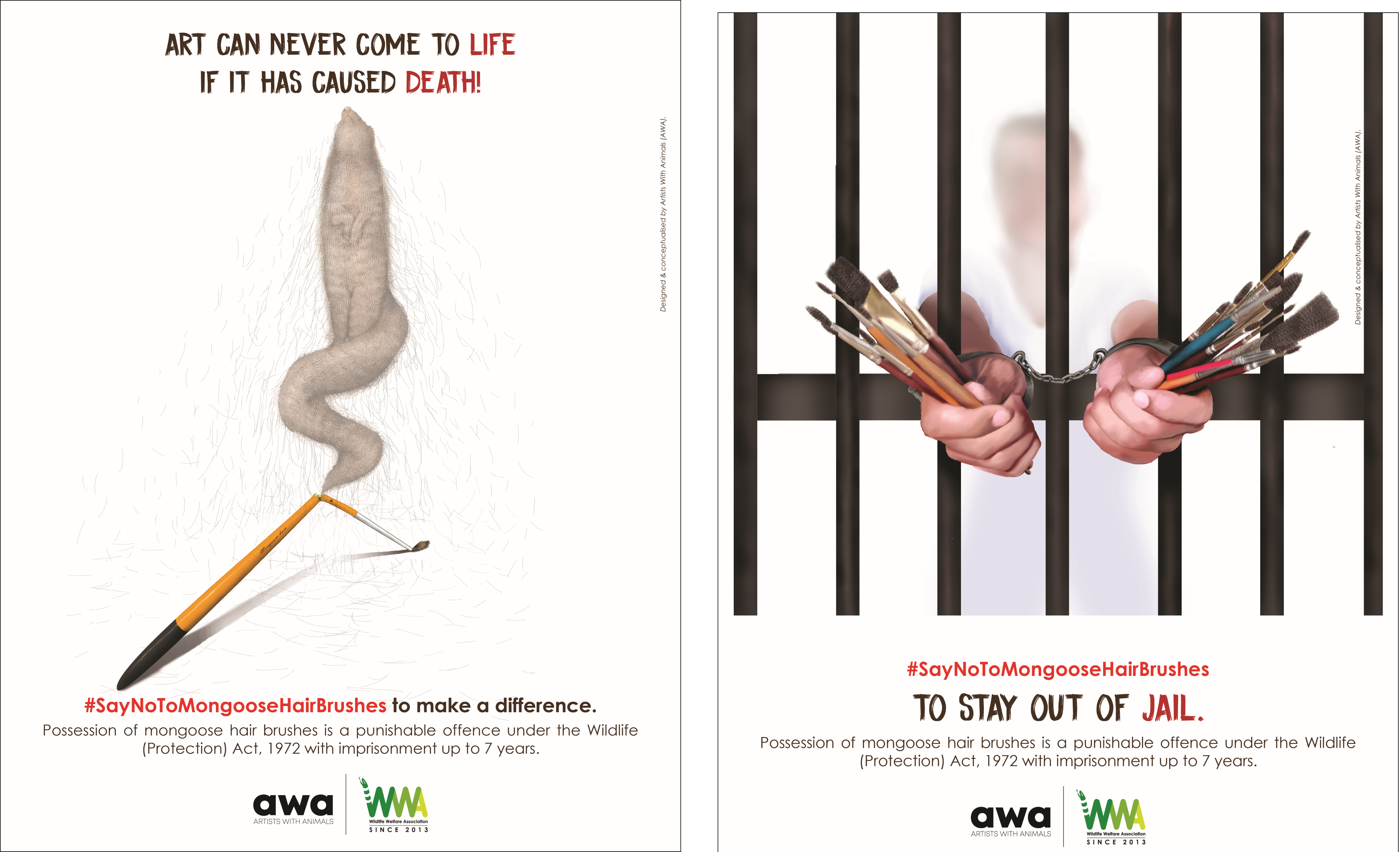 The posters were well-received; WTI, Wildlife Crime Control Bureau, Wildlife Protection Society of India (WPSI) and several other nonprofits joined the campaign. Today, AWA is a collective of artists from all lines of work; fine artists, graphic designers, illustrators, photographers, writers and set designers, united by a mutual cause; to create ethical art, and to take the soon-to-be-endangered animal out of the system.

“Mongoose hair brushes, often sold falsely as ‘sable’ hair brushes, are preferred by artists because of their waterholding capacity. Perhaps attractive strokes are made with these brushes, but does that warrant the slaughtering of lakhs of animals?” comments an artist who volunteers with AWA.

While part of Operation Clean Art, the AWA team travelled extensively across Maharashtra, visiting shops in Mumbai, Kolhapur, Thane, Navi Mumbai, and Aurangabad. What they saw stunned them — while many shop owners were aware of the illegality of their making, they still openly sold the brushes. This pointed to the core problem — lack of awareness to create consumer resistance. AWA is currently building awareness campaigns to run in colleges across the state to combat this problem, once the pandemic ends.

Aside from their mongoose hair campaign, AWA joined other environmental advocacy campaigns that opposed unsustainable projects across the country, creating a series of vivid artworks (in multiple languages) against the Hubballi Ankola Railway line Project, the proposal to exclude 15 per cent proposed eco-sensitive area (ESA) in the Western Ghats for mining and other industrial activity, and the proposed denotification of the Vedanthangal Bird Sanctuary, among other issues that are lesser known to the public as well – like a new dam in the Tansa Wildlife Sanctuary and mining in the Gir National Park.

Sanctuary believes in the wider role of the conservationist. While ecology, policymaking, research and conservation action are paramount to the protection of wildlife, communication – art being one of the most effective tools (see page 86) – is of absolute importance, to get the word out, to garner support for our wilds. At the end of the day, conservation is also a numbers game. The louder and more credible the voice, the quicker the result. And we’re working to a fast ticking clock.