On The Trails of the Great Sawfish

The overnight bus to Khulna, one of the last frontiers before the mighty Sundarbans, is to leave from Dhaka, the capital of Bangladesh, just a little past midnight. It is the end of February 2021. This is my first trip after a long hiatus and one that falls in the middle of a global pandemic. While not my first journey with the ‘Great Sawfish Search Team’, this feels like the most exciting one by far.

We are off to a new destination and I am likely to see new territories. This trip will take us to the ends of the Sundarbans, to a six-month on, six-month off fishing island – Dublar Char. This is a new study site, previously untapped by the team, who are on a reconnaissance mission to try and understand: the variety of catch, whether the fishermen ever found or caught a sawfish – and if so, where? Would they be willing to release them alive, and what encounters with sawfish and its greater family of sharks and rays would be like? The team consists of marine biologist Alifa Bintha Haque and her group of young conservationists and researchers. Alifa is an assistant professor at Dhaka University’s Zoology department and is now pursuing her Ph.D. at Nature-based Solutions Initiative (NbSI) under the University of Oxford. She is also a Photo Ark EDGE fellow under National Geographic through which she has been working in shark and ray conservation in Bangladesh for the last few years. 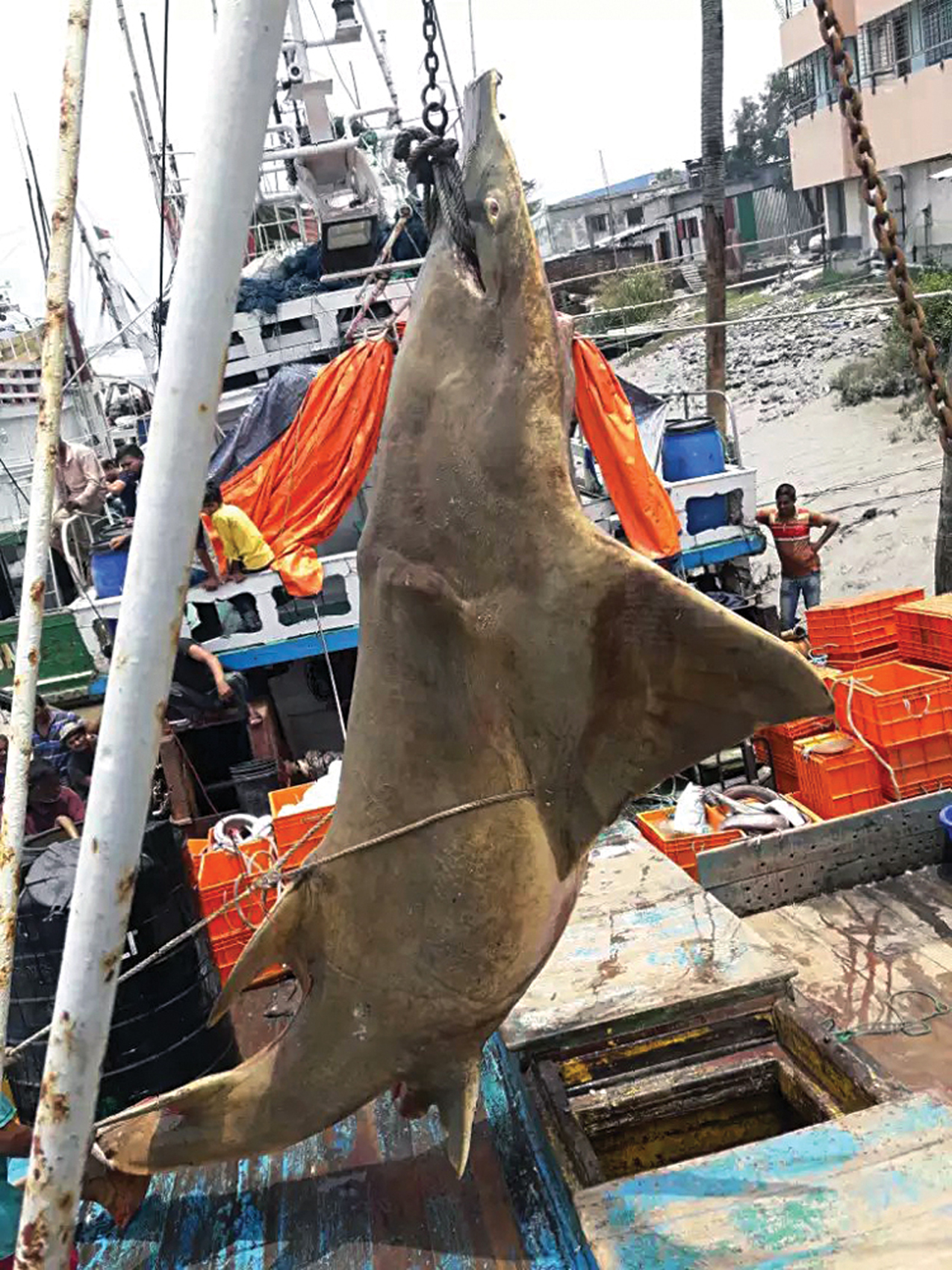 Studies conducted on the Bangladeshi coast have confirmed the existence of at least three out of the five known species of sawfish found worldwide – largetooth sawfish, narrow sawfish and green sawfish. However, over the years, there has been an alarming decline in the number of sawfish landings. Photo: Alifa Bintha Haque

It takes more than 10 hours to reach Khulna. The weather is moody when we arrive. It goes from humid, to hot, to breezy and then cool, all in one morning. The team does not waste precious moments. Even breakfast is a luxury because time and budgets are short. The morning market at Rupsha Ghat, one of the study areas, will empty out if we do not go before 9 a.m. This site is not new for the team, which has been studying it since 2016, but it is a first for me.

Forgoing breakfast, we start off for the destination. I take notes while trying to avoid stepping on a rotting fish here, a mound of fish scales there. I skirt through a river of people, ducking their overhead barrels, fully loaded with fish that has just landed from trawlers returning either from days at sea or in the Sundarbans.

Over the years, Alifa and her team have built a strong rapport with some of the fishers and traders – who are currently the very people helping them in their research. Through phone calls made by the fishers and traders over the course of two years (starting from 2016), at least 40 sawfish landings were documented. This was discussed in detail in a paper titled ‘Publish, then perish? Five years on, sawfishes are still at risk in Bangladesh’ which was published last year by Wiley Online Library. 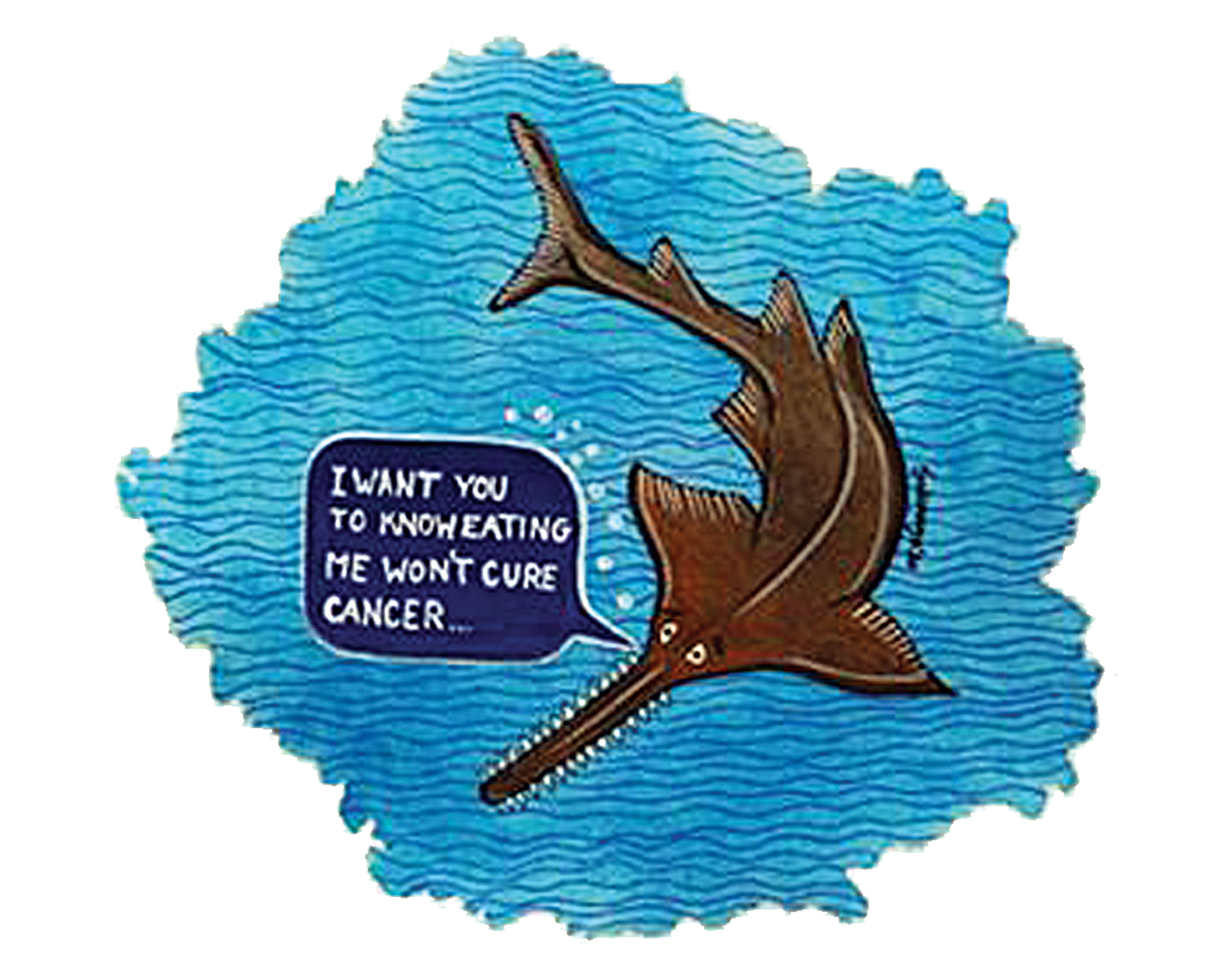 This illustration formed part of the awareness materials developed by the author and her team. A top predator of the oceans, the sawfish’s decline is also linked to superstitious beliefs such as its meat being a panacea against cancer. Photo Courtesy: Abida Chowdhury.

A decade-old study stated that there are four species of sawfish in Bangladesh, a considerably high diversity for so small a nation. Social surveys of fisherfolk, observation of dried fish markets and use of molecular techniques in the coast in Bangladesh confirmed the existence of at least three out of the five known species of sawfish in the world – largetooth sawfish, narrow sawfish and green sawfish. Both largetooth and the green sawfish are considered Critically Endangered while the narrow sawfish is listed as Endangered by the IUCN Red List of threatened species. The first confirmed record of the Critically Endangered green sawfish in Bangladeshi waters was determined in a paper first published on November 23, 2018.

Over the years, there has been an alarming decline in the number of sawfish landings. This prehistoric creature has entirely disappeared from many of its old habitats, resulting in an international call for action. According to IUCN’s Species Survival Commission Shark Specialist Group (SSG), sawfishes were historically found in 78 countries. Yet, they are now found in merely 36 countries, of which they are only protected in 19 countries. Often, the protection is just on paper, with no tangible outcomes. 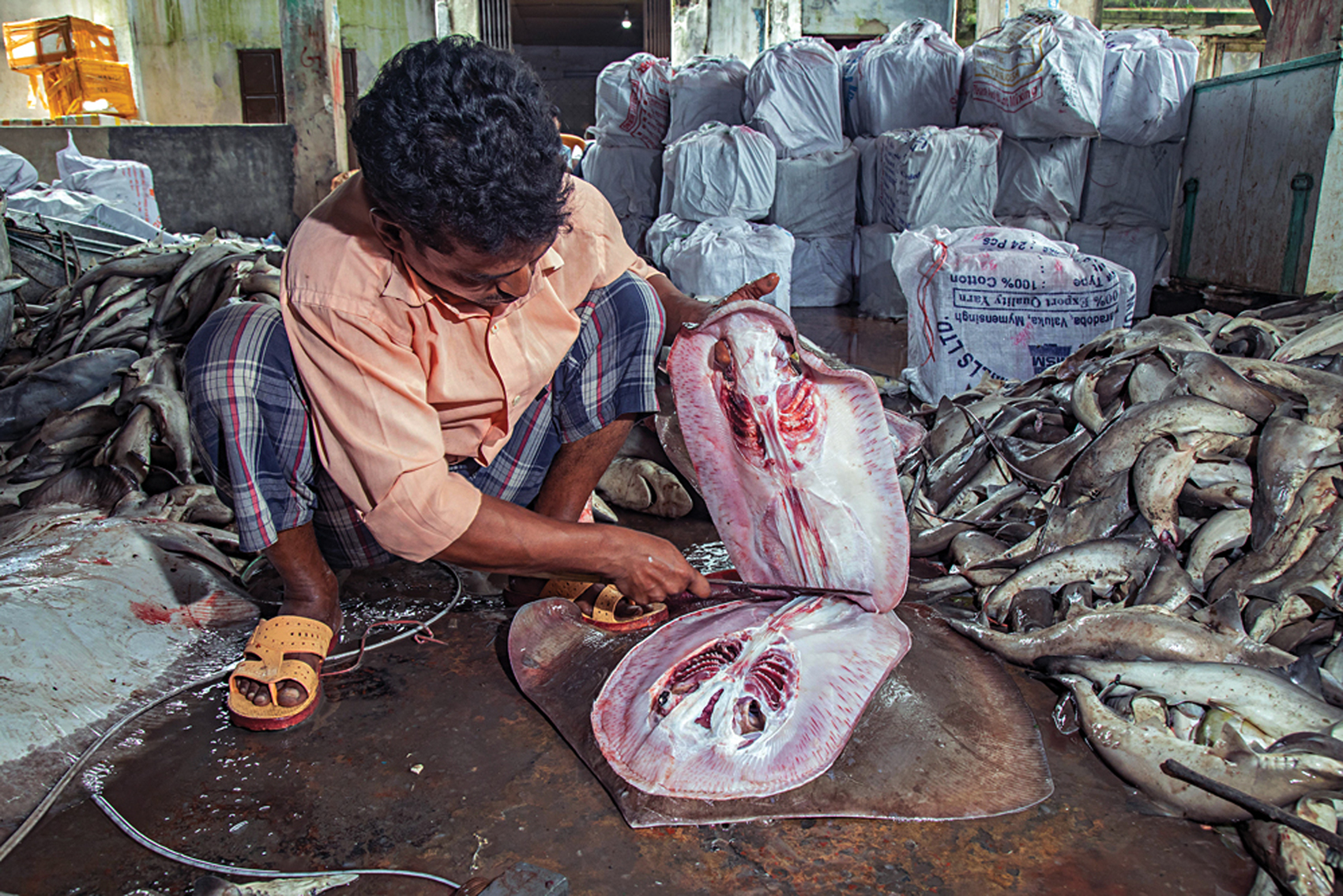 A ray being processed – which means cut up and separated into different parts such as fins, rostrum and meat, and later dried or frozen. This is the fate of most sharks and rays caught from the sea. Photo: Fayed Masud Khan. 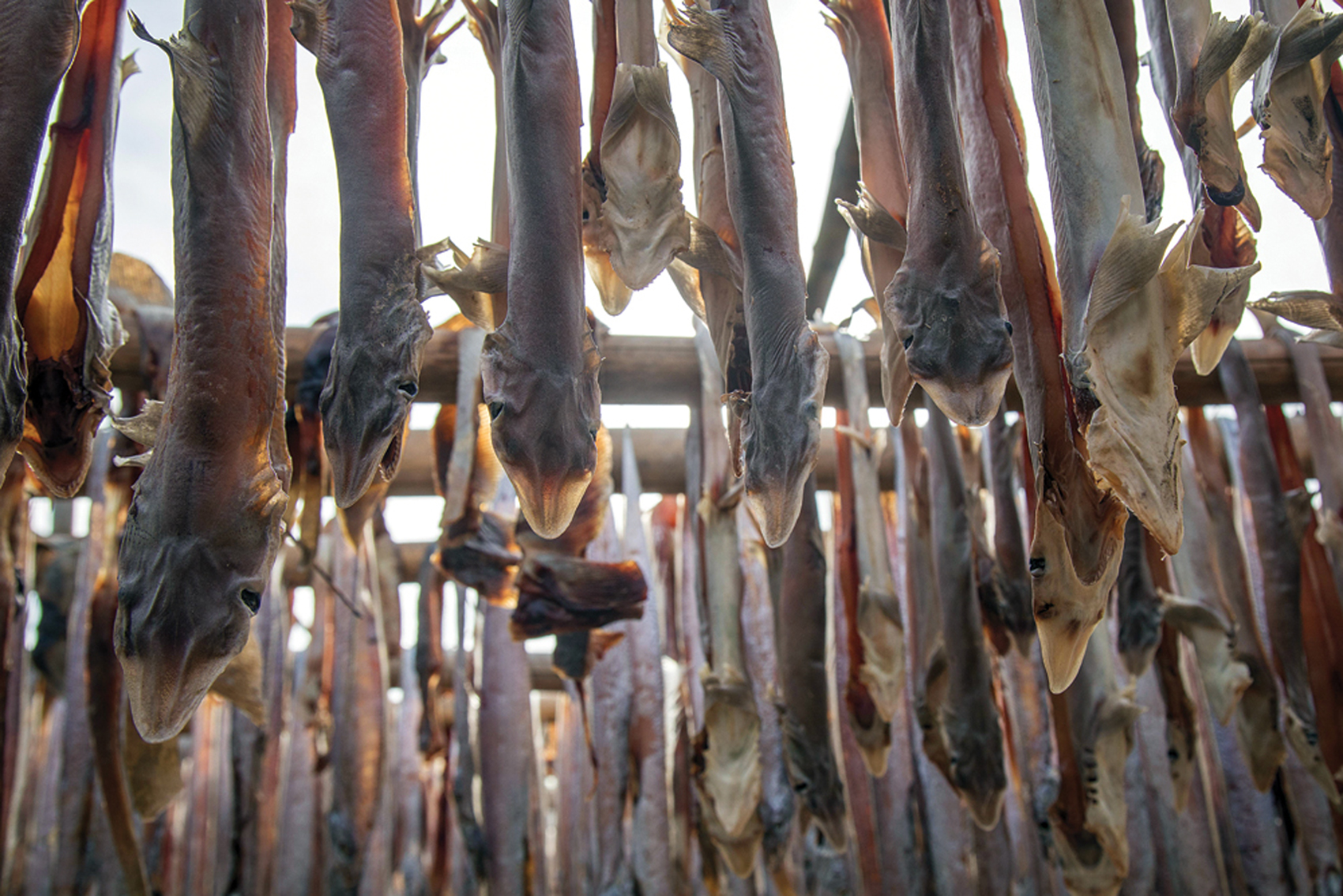 Of Trade and Superstitions

Despite hurrying to Rupsha Ghat to assess the catch that comes from the river and the sea, we find that most of the work for the day has concluded. When Alifa initiated this research project on her own in 2016, she first began with visits to Cox’s Bazar, by far the largest and most expansive marine fish landing site in the country. Alifa would go to the market at the break of dawn, before the trawlers and boats came ashore, turning the market into a busy labyrinth of blood, scales and the shouts of fish traders. Alifa began collecting samples of sharks and rays, which arrive in the hundreds and are usually procured by a trader and taken to a processing centre. This was not an easy path for her to forge. Being considered an outsider and woman of higher education working in an area dominated by men, the fisherfolk and traders were initially wary of her.

But she was not one to be stopped. From small questions such as how much a shark costs, where it went once it was sold to discussions about life at sea and shared tea-breaks at nearby stalls, she eventually became the fisherfolk’s confidant. Soon, she was in touch with a network of fisherfolk and traders, each of whom she had interviewed for well over an hour. They began reporting interesting landings to her. To Alifa, who was studying sharks and rays and their trade chain from the Bay of Bengal to international waters, an interesting landing meant a sawfish or a larger-than-life ray or shark.

It was through this network of fishers that she uncovered grisly secrets of the sawfish’s slow demise and the market that is fuelling this trade. 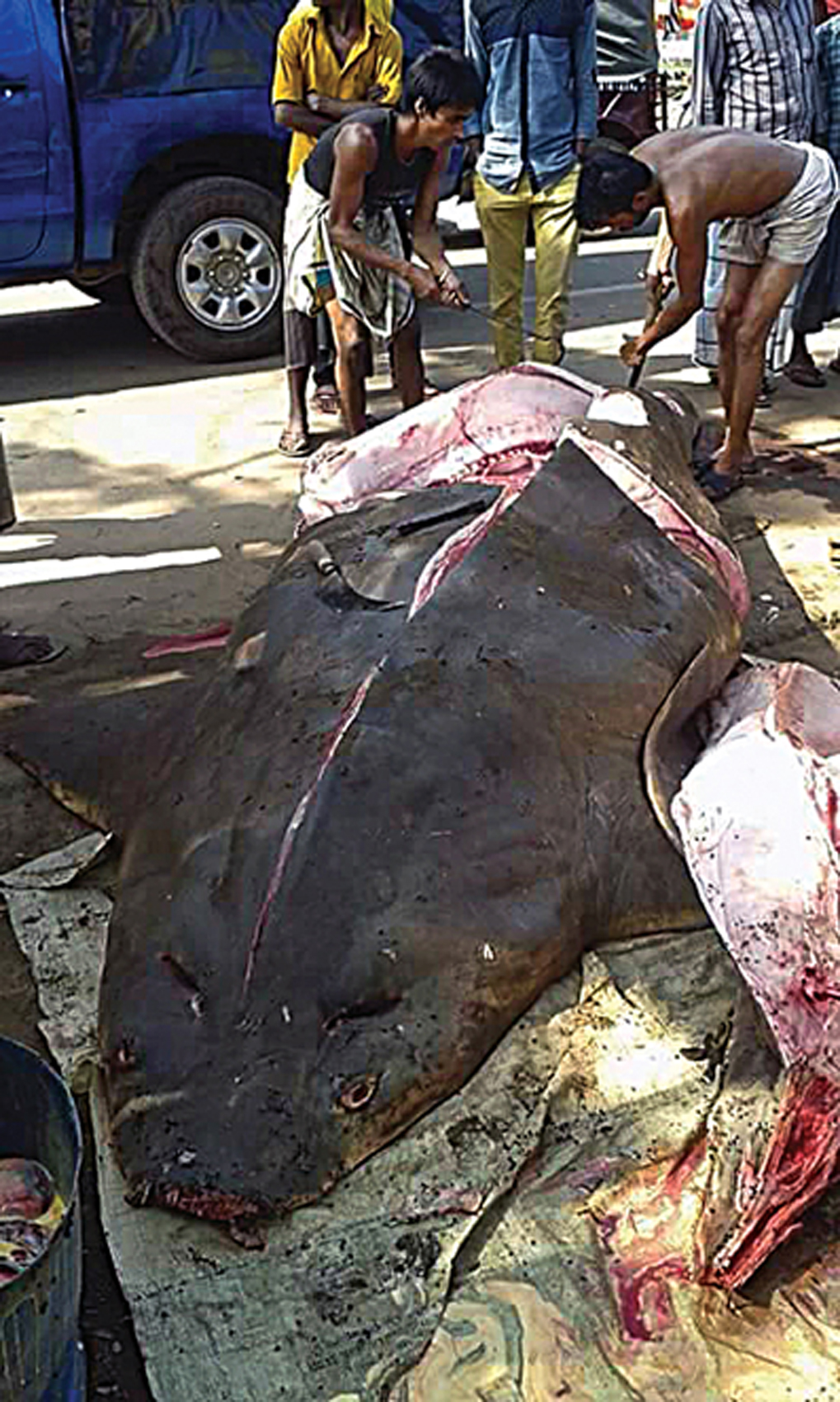 A rare sighting of sawfish, its rostrum already cut off. In the 1990s, sawfishes were abundant but rampant fishing directly for sale and as bycatch for target species such as sharks and rays have led to drastic population declines. Photo Courtesy: Alifa Bintha Haque.

“Each kilogramme of meat can fetch a substantial sum, which means they have chanced upon a fortune because a sawfish could weigh more than 1,000 kg. This is a community of poor fisherfolk who can barely manage a monthly wage of 30-40 USD,” says Alifa. This also means the issue of releasing a sawfish alive is out of the question for a fisher who is in dire need.

Back in the 1990s, sawfishes were caught in abundance. Information before this period is scarce. It is likely they were more abundant before. Other than finding buyers in local markets, they would become part of the shark and ray bycatch from the bay. They were processed – which means cut up and separated into different parts such as fins, rostrum and meat, and later dried or frozen – then packed and exported through a non-customs border to Myanmar, Thailand, China and as far as the United States of America (the last destination on very rare occasions, with researchers having identified just one such instance).  This was essentially what was done to sharks – pig eye, bull, tiger, hammerhead, spot tail, whale and spade nose sharks; and rays – blue-spotted, whip, spine tail and longtail butterfly rays. This continues for most sharks and rays caught from the Bay of Bengal to this day.

The sawfish, although a top predator of the oceans, could not escape the clutches of human superstition and storytelling either.

“Aareh! This is korat maach! You do not know?! Eating its meat cures cancer,” says one fisherman to another during a workshop with the research team at Dublar Char. 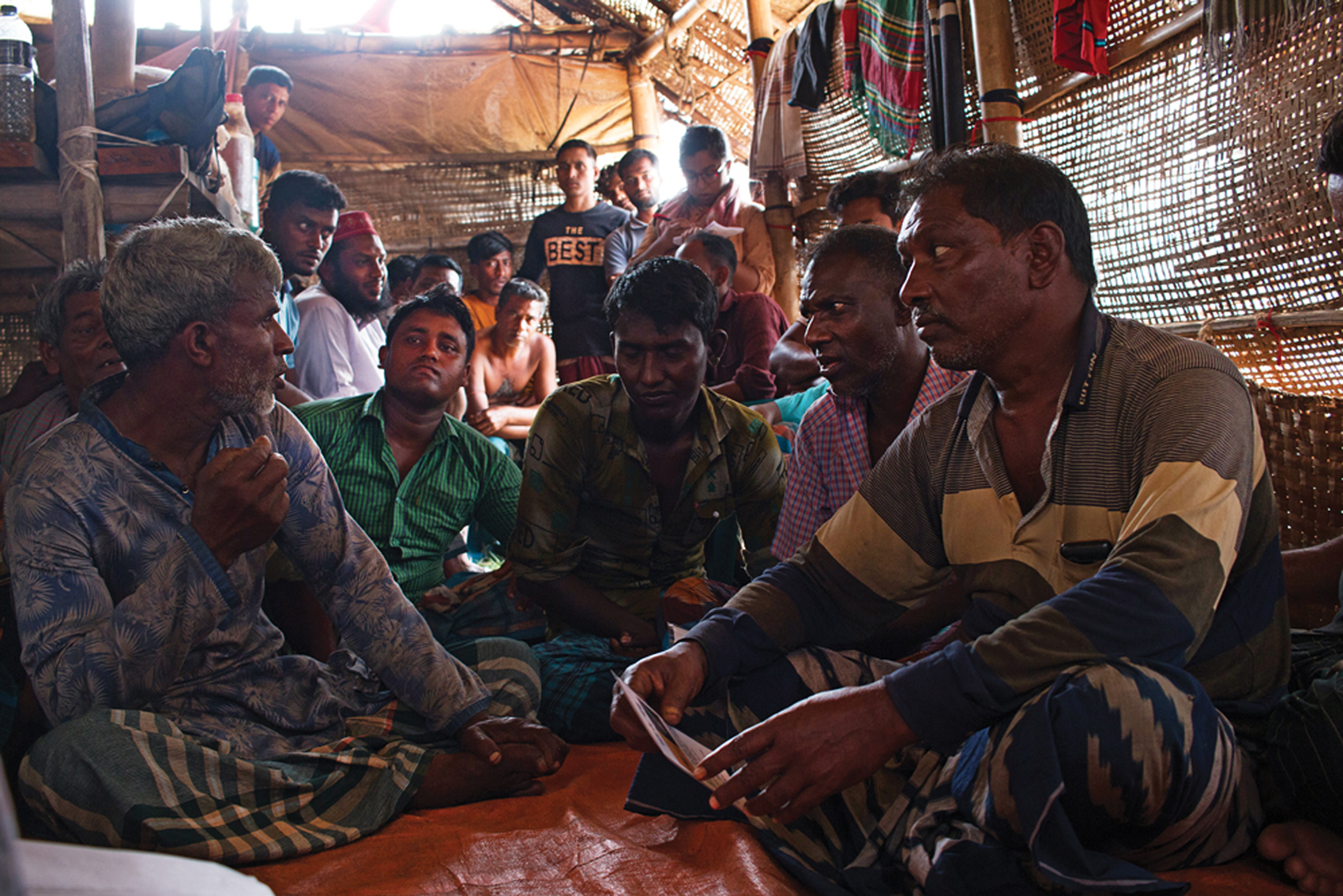 A workshop with fisherfolk in Dublar Char of the Sundarbans. Photo: Marzuk Ahsan.

A Future for All

As the team concluded its day at Rupsha Ghat, we gather our belongings and head towards Mongla. This is one of the busiest ports of Bangladesh, connecting the massive river network of the Sundarbans to the Bay of Bengal. We reach tired from the day in Khulna and rough it out another night on land before boarding our boat to the island of Dublar Char.

The captain of our boat is Belayet Hossain, an ex-pirate turned captain. He steers a tiny fishing vessel that has a makeshift awning, which acts as our room, storage and sleeping area all at once. There is no available freshwater and people will have to make do with brackish water pulled up from the rivers. But somehow, amid the vast tidal network of the fast-approaching Sundarbans, the tiny boat felt roomy.

The island of Dublar Char is situated where the Sundarbans begin to end, and the river and island network gives way to sea. The island is something out of a magical book, though perhaps not a fairy tale but a spooky one. This place is active from October-November to early March. When the rains come and the sea is too rough to approach, the fisherfolk pack up and leave. Here too, the superstitious belief that sawfish meat cures cancer runs deep – yet one more reason behind its destruction. Here is where the workshop to understand whether this could be another study area for sawfish is being conducted. 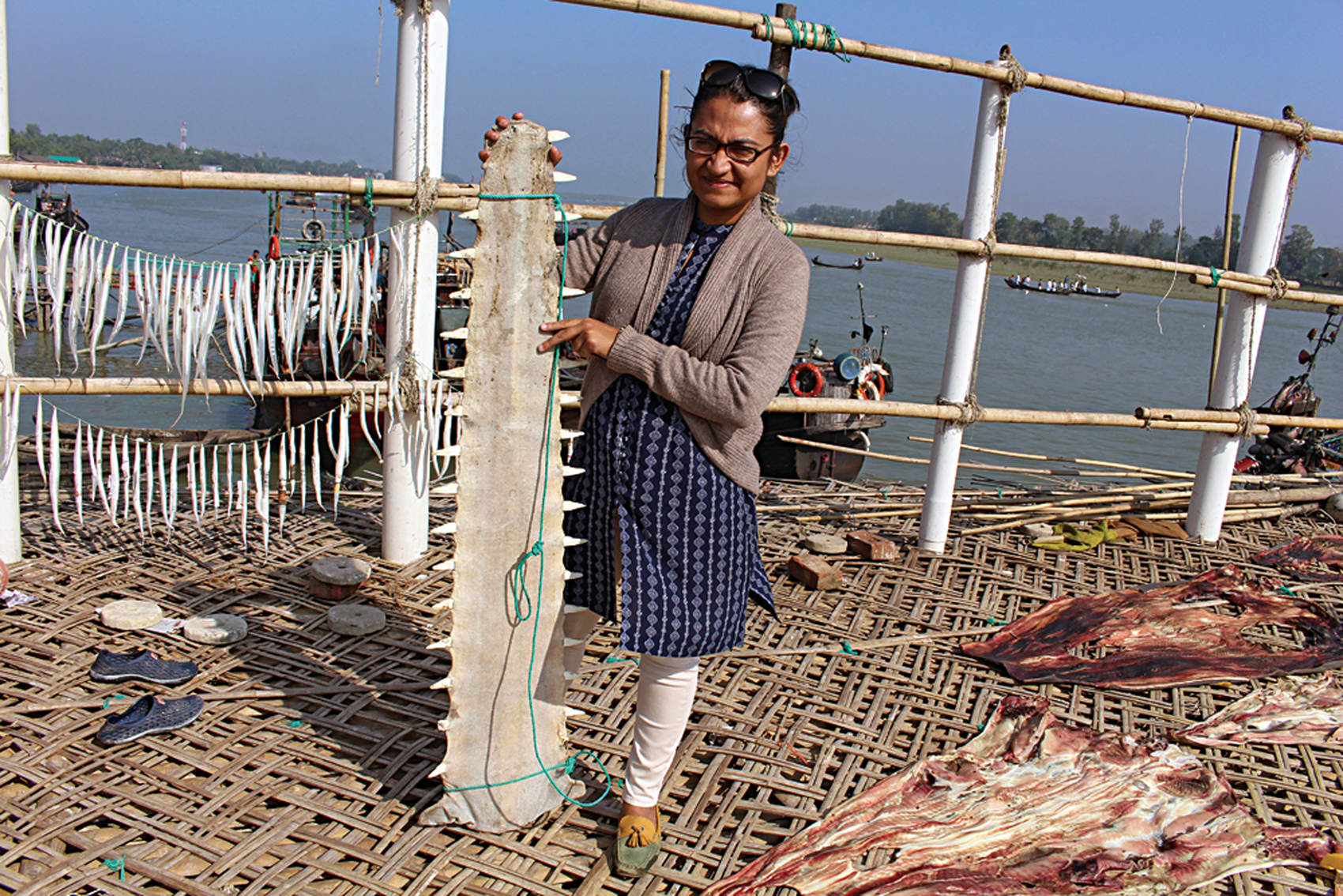 A prehistoric species that have roamed the earth for millennia, these giants of the sea are now in need of help. Help that must be orchestrated from all fronts to ensure we do not lose them. Alifa continues her work on uncovering their mysteries, on locating pupping grounds and on steering the conversation towards Bangladesh. She and her team are striving to find a solution that does not demonise or affect the fishing community. The now marginalised sawfish must live, but so too must the people who traverse the rivers and seas beyond and live off it.

A journalist at The Daily Star, Abida Rahman Chowdhury focuses primarily on conservation stories and has covered topics ranging from tiger conservation to the impacts of coal-based power plants in the Moheshkhali coastal area.