Text and photographs by Reva Duraphe

We climbed up a narrower road with slippery mud and only bamboo to hold on to. We had taken just a few steps when a reddish-orange animal with black legs appeared on the branches above us. A red panda! I had never seen a more beautiful animal.

The fresh oxygen released by the trees on Darjeeling’s mountain roads filled my lungs. After months in a polluted city, it felt calming. A three-hour scenic drive brought us to the Maneybhanjang Check Post, the entry into the Singalila National Park. From here, we would travel on to Habre’s Nest, our homestay, another 20 km. away.

From Habre’s Nest, at a height of 3,048 m. above sea level, everything was misty because of the clouds. Due to low visibility, we could not explore much that day, so we did some birding at the bird hide. We saw a flock of small White-browed Fulvettas, Scaly Laughingthrushes and their larger cousins, the Spotted Laughingthrushes! A Yellow-billed Blue Magpie flew down to eat some grains in the grass outside the bird hide. If I had leaned out of the window with an outstretched hand, I could have touched the bird! 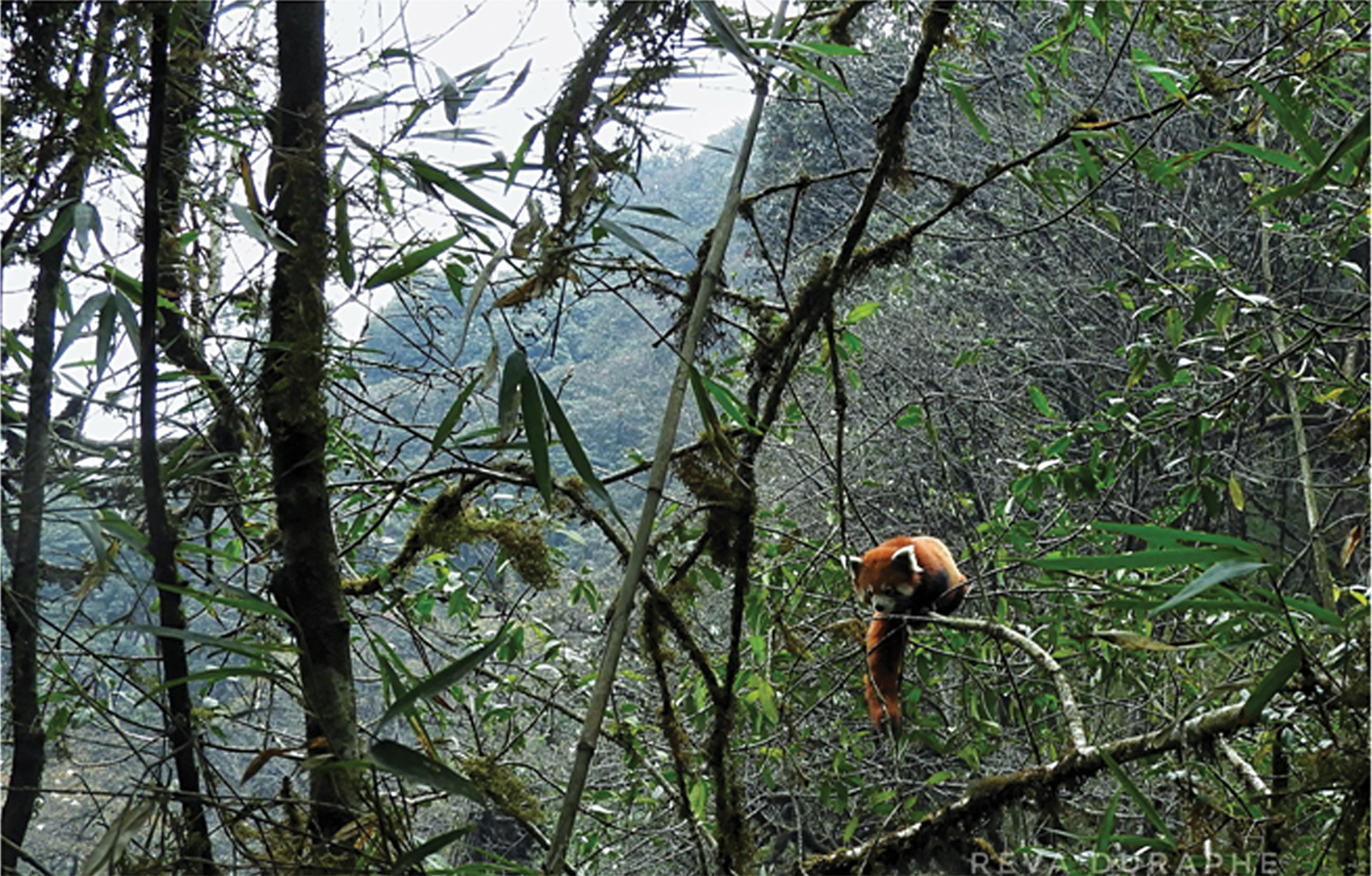 Unfortunately, heavy rainfall, strong wind and low visibility continued for four days. On the third morning, we drove up to a famous lake called Kalipokhri. White coloured lilies grew in small patches and the lake waters were a resplendent Prussian blue.

On the fourth day, the storm lessened. We headed towards Tumling and while heading back, we saw a large, red, pheasant-like bird along the road. A male Satyr Tragopan! A bird on my to-see list! And here it was, calmly eating insects in an open patch of ground.

On our post-lunch walk, we spotted a mixed flock of Yuhinas – the Stripe-throated and the Rufous-vented – on a rhododendron. We also saw a Hoary-throated Barwing, a rare beauty, and some Bar-throated Sivas. Suddenly, our land rover drivers returned and with a sense of urgency asked us to get into their jeeps! After a speedy drive, we got off at a place with rocks, a narrow path leading between. I heard the driver say ‘Habre!’ which means red panda in Nepali. A sudden surge of excitement went through me! 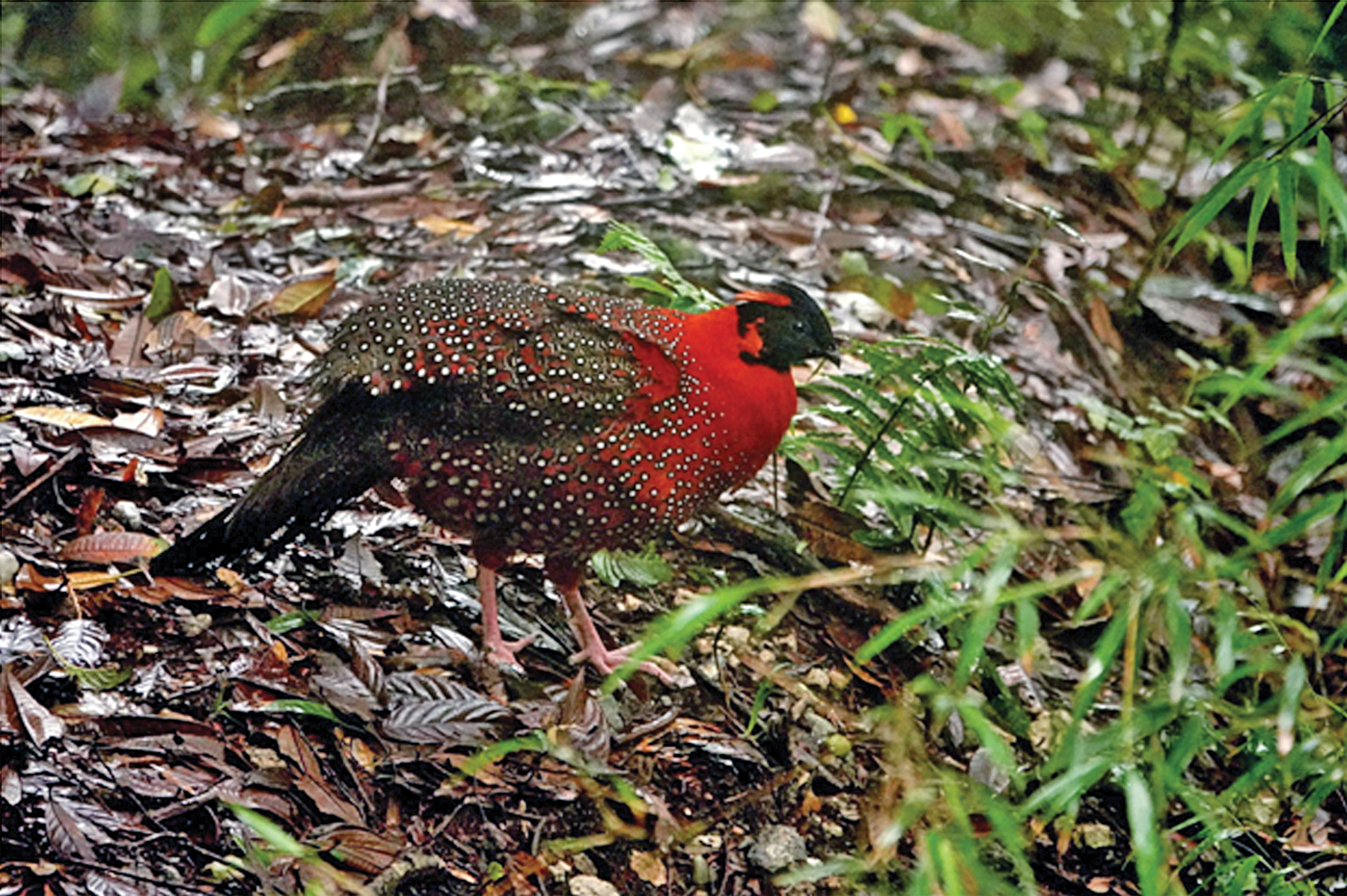 We climbed up a narrower road with slippery mud and only bamboo to hold on to. We had taken just a few steps when a large reddish-orange animal with black legs appeared on the branches above us. I stared. It was a red panda! I had never seen a more beautiful animal. I wished I could go up there and live with these amazing animals. Soon, we had to turn back as it was getting dark.

We went on a birding trail the following morning. At last, the sun was shining brightly. We spotted a flock of Black-throated Parrotbills. I heard a ‘tak-tak-tak-tak-tak’ – a loud drumming filled the air, and then I saw a flash of black and cream. A gorgeous Darjeeling Woodpecker came into view. We also saw a White-tailed Nuthatch, Sivas, Yuhinas, while Kestrels and Honey Buzzards circled overhead. 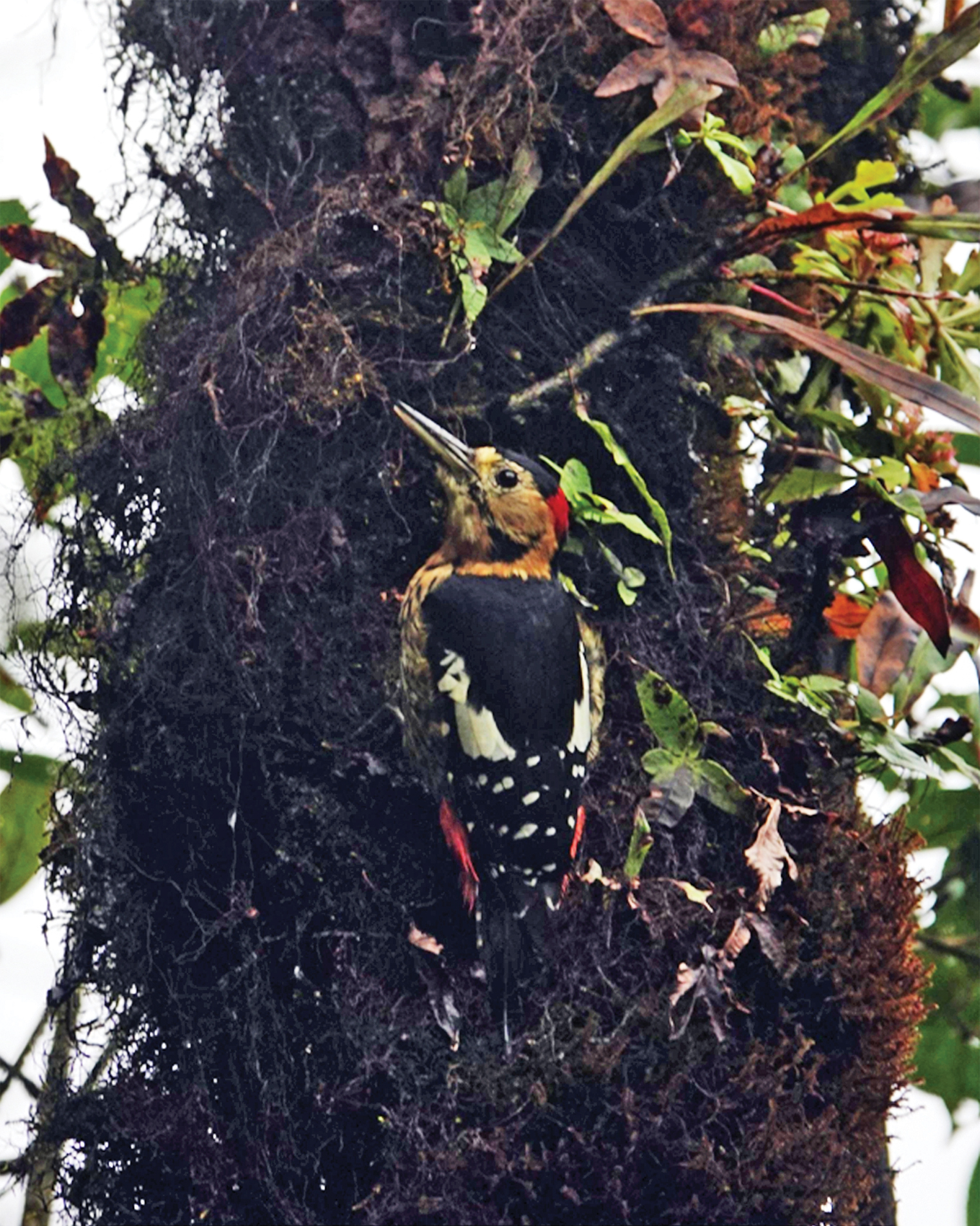 While returning, my mom and I stopped to rest, for we were tired. I suddenly yelled “panda!”. A cute orange fur ball was scurrying in our direction. Both of us got up and began moving towards it. The panda obviously had quite the opposite reaction. It looked at us innocently, as if asking, “Why are you charging at me? I’ve done no harm,” and fled, not to be seen again. I was so close to it, but also realised that we must always keep our distance from wild animals! 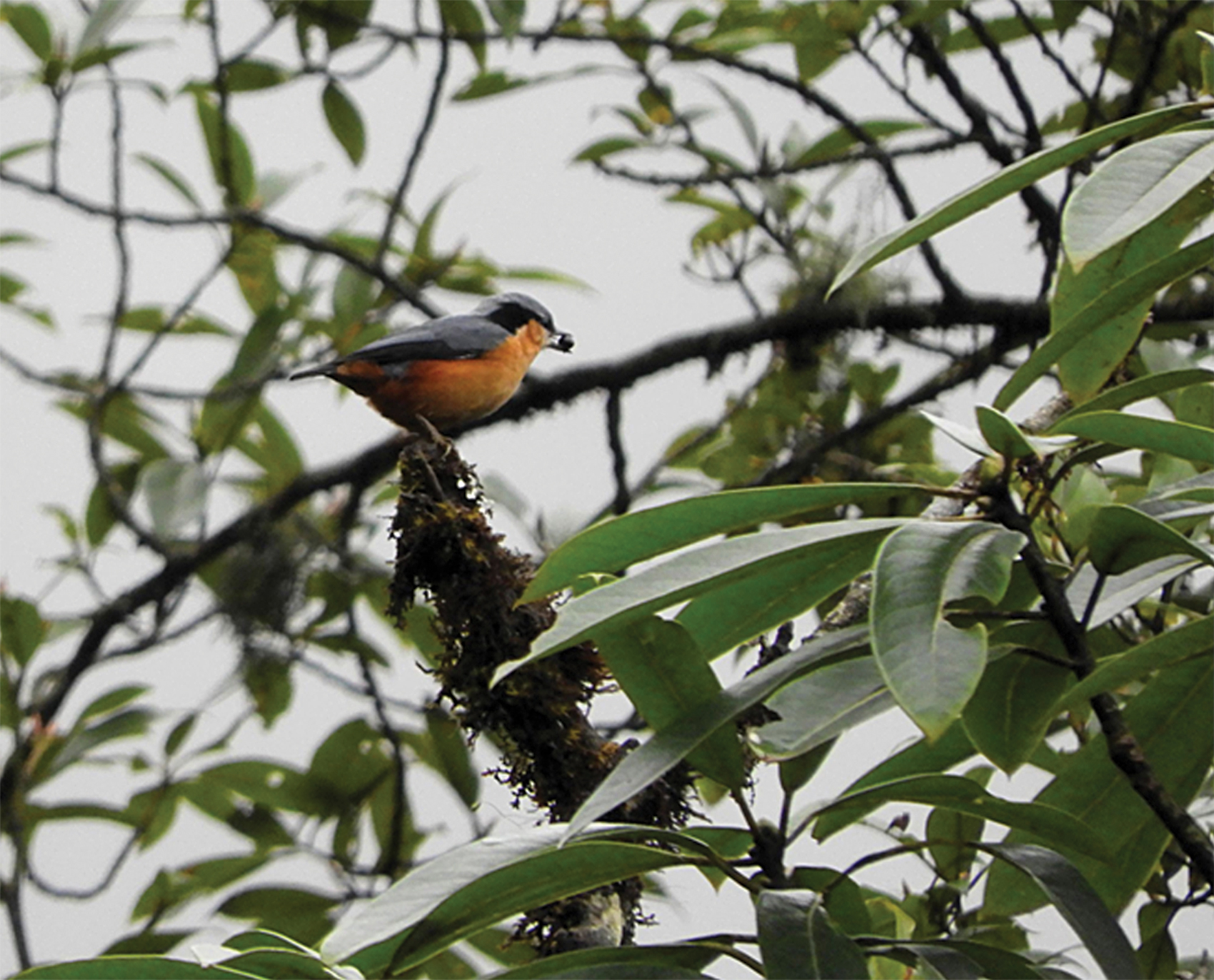 The same afternoon, we found the rare Spotted Nutcracker. In size and shape, it was like a crow. But its beak was similar to that of a woodpecker. Through my binoculars, I also saw a strange maroonish-red bird with a yellow belly. It had white spots along its back. Its head was black and a white brow ran above its eyes. I thought it must be a Fulvetta, so I did not take out my camera. But this too I regretted later. It was a Red-tailed Minla!

The special farewell lunch was momos and noodles. Yum! We were leaving the next day, and I did not want to go back to the city. But I hope to return soon, this time for a longer period. 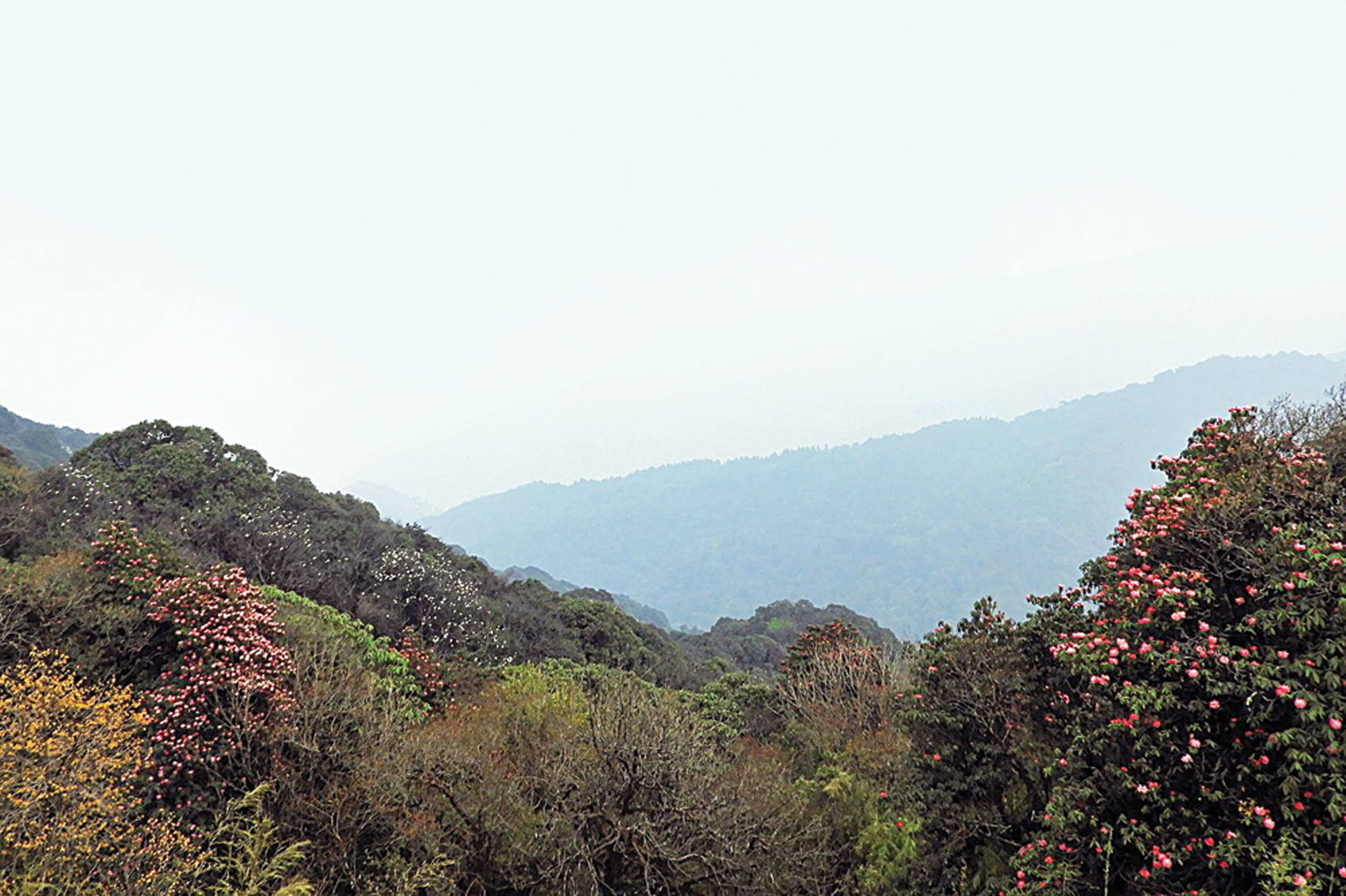 TOP TIPS WHEN VISITING SINGALILA…
~ Reach Bagdogra Airport, West Bengal, and take a taxi to Maneybhanjang.
~ From here, land rovers will take you into the Singalila National Park.
~ Be mindful of the place and do not litter or disturb wildlife during your stay.

Reva Duraphe, 13, has been a passionate birder and wildlife enthusiast since the age of seven. She is studying in Class 8 at The Orchid School, Baner, Pune.