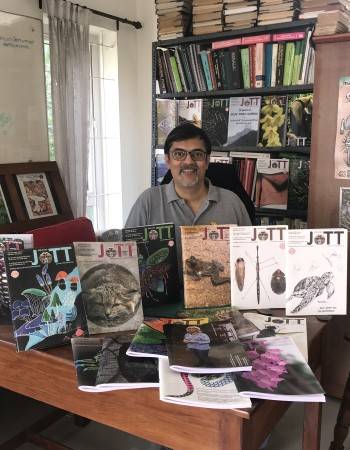 Like the little-known species he works to protect, Dr. Sanjay Molur is a discreet trailblazer in conservation science. Specialising in risk assessment and conservation planning of wild species, he has assisted in the assessment of more than 10,000 taxa within India, South Asia, and around the world - from medicinal plants, amphibians, reptiles, mammals, mangroves, selected groups of invertebrates, to freshwater fish, odonates, mollusks, aquatic plants, and more. His extensive assessments have led to the discovery of several new species of amphibians and spiders, and revision of existing species.

So versatile is his expertise that in his 26 years in the field, he continues to work under a vast range of capacities - he is founder and secretary of the Wildlife Information Liaison Development (WILD) Society; is co-chair of five species specialist groups; runs two networks for reptile and amphibian researchers in South Asia; was part of the international panel that refined the IUCN Red Listing process; and is also Founder and Chief Editor of Zoos’ Print Journal and the Journal of Threatened Taxa since 1999 - India’s only platinum open access, monthly, international, peer-reviewed journal, a treasure trove for scientists and researchers. He also spearheaded several citizen initiatives, including Pterocount which received data records from four countries and proved crucial in the inclusion of two endemic bat species - Latidens salimalii and Otomops wroughtoni - under Schedule I of the Wildlife (Protection) Act, 1975.

For his years of dedicated research, and in recognition of his endeavours, two species have been named after him - a thomisid spider Strigoplus moluri Patel, restricted to the southern Western Ghats, in 2003, and a species of freshwater fish Pethia sanjaymoluri from the northern Western Ghats in 2016. “Sanjay has the unique ability to focus at a microscopic level or at a broader multi-species conservation level with equal expertise as and when required. His work in conservation, research, evidence building, and combining science with the broader stakeholder perspective for planning, implementation and policy is astounding,” says Dr. Mewa Singh, the renowned conservation biologist and professor of ecology and animal behavior at University of Mysore.

Sanjay’s persevering efforts have pushed India’s taxonomy and research to greater heights in the field of lesser-known taxa. He has developed and conducted numerous hands-on training workshops for amateurs and young biologists in taxonomy and field techniques, inspiring and equipping the next generation of researchers.