By Aishwarya Sridhar
My earliest memories involved watching flamingos in the Uran wetlands. Just 30 km. from Panvel, where we lived, my father would take me there on weekends when the air reverberated with birdsong. Through my binoculars, I recall spending hours watching birds feeding and roosting. As the years rolled by, Uran’s birding habitats declined, save for one – Panje. This degradation was a result of mass land acquisition for the Navi-Mumbai Special Economic Zone (NMSEZ) sanctioned by CIDCO at the Uran-Dronagiri node. Within a decade, nearly 2,000 ha. of mangroves and wetlands were destroyed across Uran. The coastal town was transformed from a functioning ecosystem and a thriving birder’s paradise into a degraded parcel of land crisscrossed by giant concrete bridges. 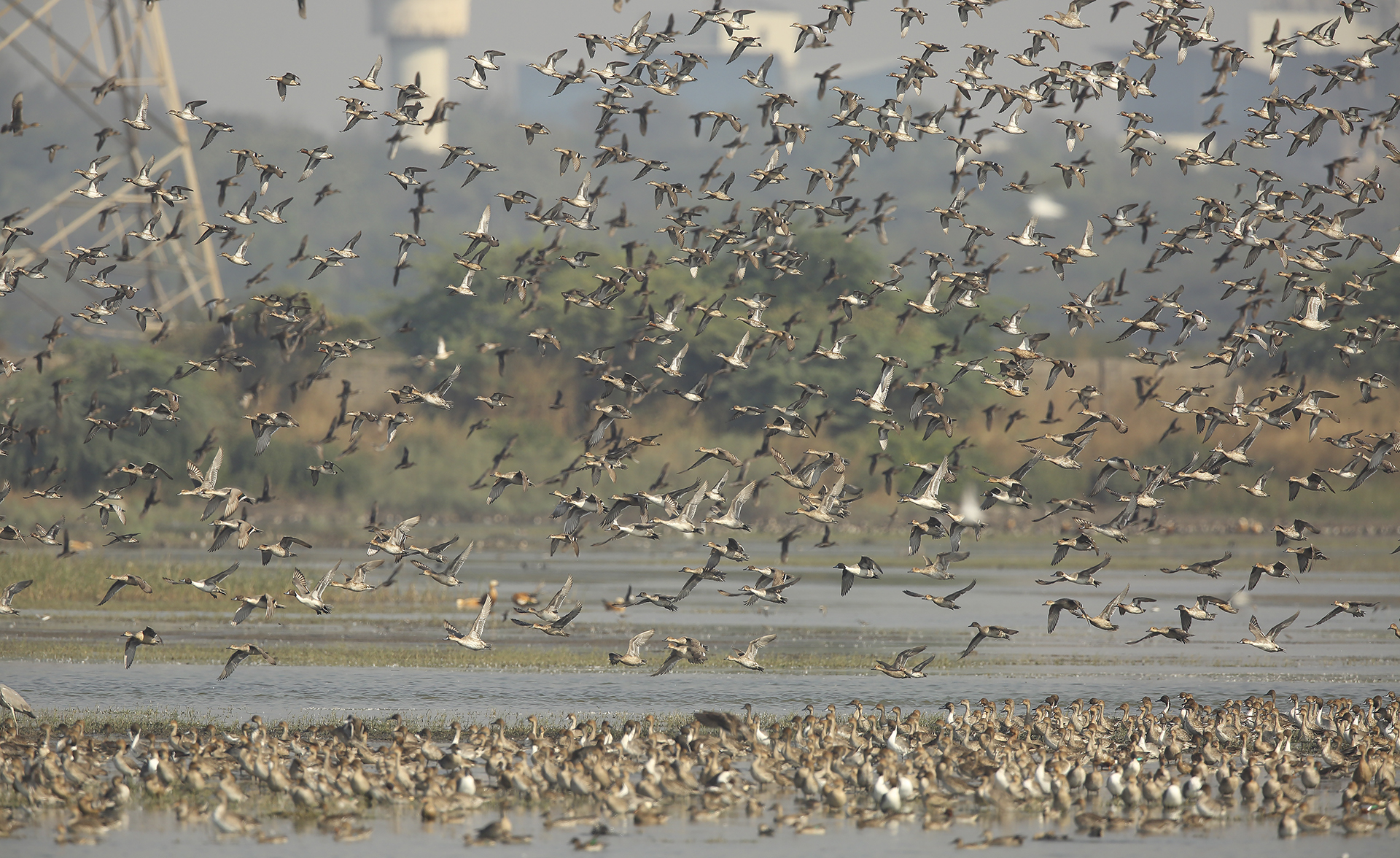 Photo: Aishwarya Sridhar.
The documentary ‘Panje - The Last Wetland’ by Aishwarya Sridhar showcases the changes Uran has witnessed over the years. It asks for the protection of this last remaining wilderness around Navi Mumbai, which plays host to thousands of migratory and resident birds. The film also highlights how Panje’s disappearance could spell trouble for the Navi Mumbai Airport, which will probably experience greater bird-hit incidents since its location lies on the migration path of large flocks of godwits and pintails. Since the wetland is located 17 km. away from the airport (as the crow flies), it could serve as a suitable ‘magnet’ for birds, which might otherwise opt for sites closer to the flight path of planes landing and taking off from the airport.

Panje, now spreads across 289 ha., but is barely holding on to existence. I have recorded over 250 species of birds here (see checklist of Panje’s fauna below). In winter, this once-extensive habitat offered refuge to a massive number of avians, but despite its mistreatment, it still hosts migrants all the way from the Arctic, Russia, China and parts of Europe. In 2018, for the first time in 15 years, a Red-necked Phalarope was spotted. When I got the call from an excited Parag, my talented, local bird guide, I wasted no time to grab my camera and field glasses and set out to see the special visitor. By the time I reached, word had got out and I saw that a few equally enthusiastic birders had already arrived.

A small, delicate wader, the bird is well-adapted to life on water. I spotted two and returned faithfully over the next three days to photograph them. The arrival of the phalaropes had birders from across India visiting the Panje wetlands to witness their arrival.

Apart from such rare winter migrants, Panje hosts an estimated 1.4 lakh birds every winter. The Northern Pintail, Ruddy Shelduck, Bar and Black-tailed Godwits, Ruddy Turnstone, Glossy Ibis, Curlew Sandpiper, Kentish Plover, Slender-billed Gull and Pacific Golden Plover are some of the star attractions. Additionally, the wetland offers refuge to thousands of flamingos and many Painted Storks that roost and feed here. The ecosystem supports an abundance of aquatic life on which both birds and fisherfolk depend. A flood-control infrastructure and a huge economic asset of inestimable ecological worth, this wetland is neither understood nor valued by Navi Mumbai’s business world and most of its urban denizens. 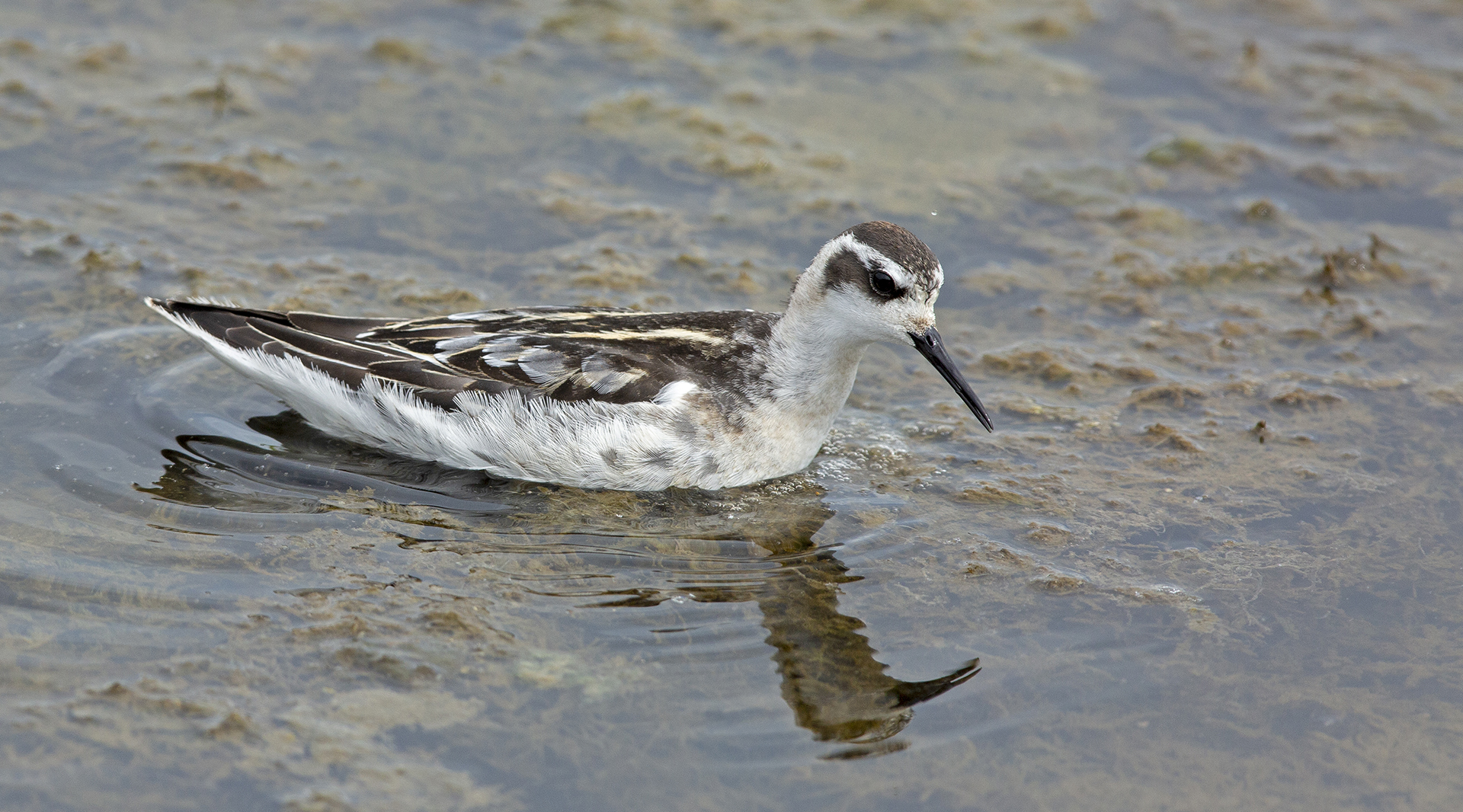 In 2018, for the first time in 15 years, a Red-necked Phalarope was spotted at Panje. Photo: Aishwarya Sridhar.

In 2018, the NMSEZ actually blocked the inflow of tidal waters, causing the wetland to dry up. At a meeting at CIDCO’s headquarters, an unnamed senior official insinuated that the migratory path of birds could be changed, the way we redirect traffic!

I was aghast! But he seemed serious! Can we afford to leave the fate of our planet and future generations in the hands of such ill-informed decision-makers?
Wetlands are a critical part of the Central Asian Flyway. Unfortunately, Panje today is far from thriving. Photography has been banned and security guards have been deployed by NMSEZ to patrol the area, not to protect birds, but to keep birders at bay. When I visited in early June 2021, I was subjected to verbal abuse from the security guard who threatened to have me arrested. Despite an approval from the State Wildlife Board to declare Panje as a flamingo sanctuary, the land is yet to be notified according to the provisions under the Wild Life (Protection) Act, 1972. Bizarrely, despite orders from the Honourable Chief Minister of Maharashtra, and the National Green Tribunal, CIDCO has not yet removed the thrombosis, very purposefully placed to prevent tidal inflows into the wetlands. In the days to come, this humungous error is going to cost Navi Mumbai, both ecologically and financially. We will HAVE to repair the damage if the city is to remain viable.

For now, however, Panje is literally gasping for life (as is our city) and if nothing is done soon, it may breathe its last! 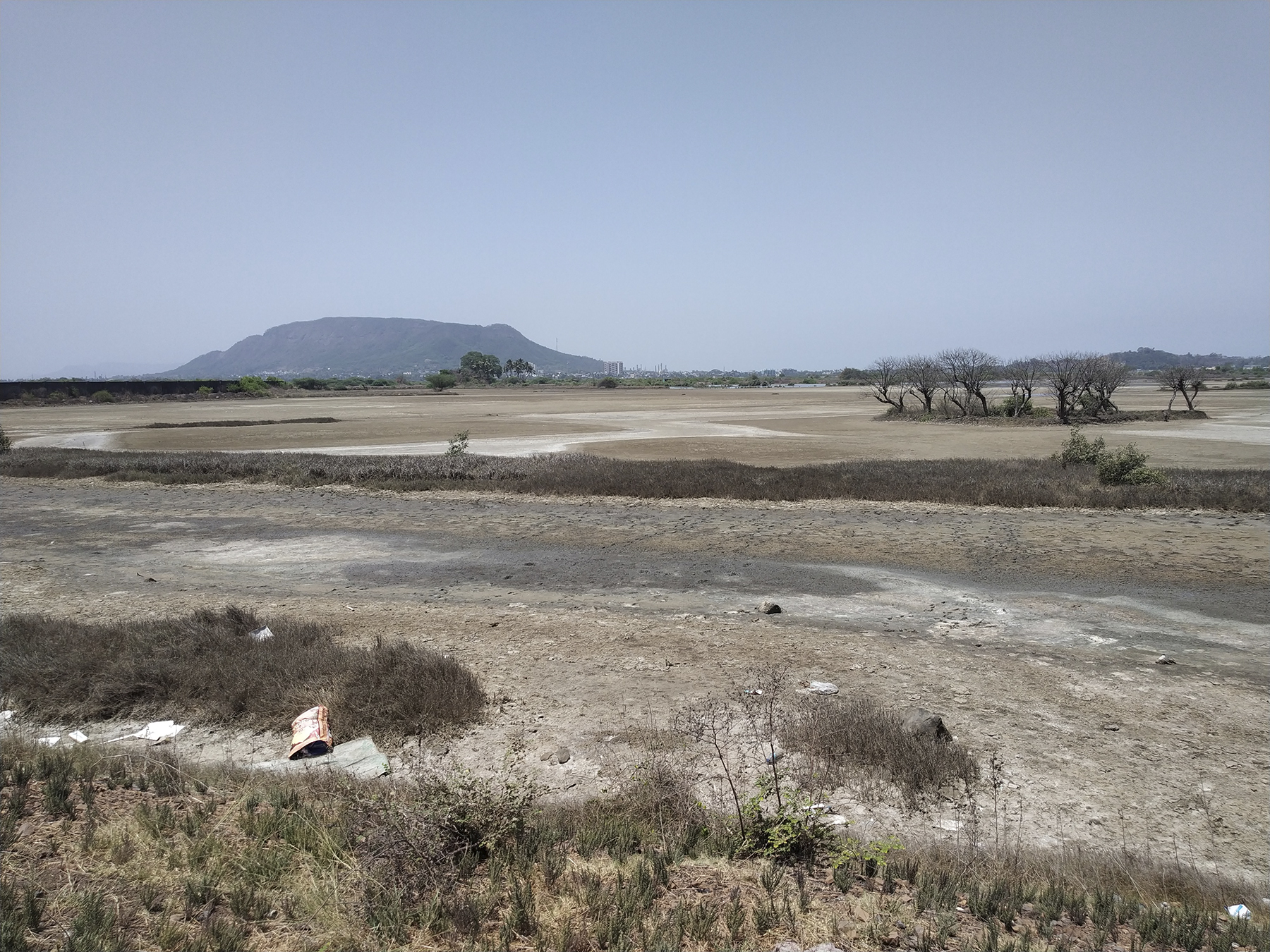 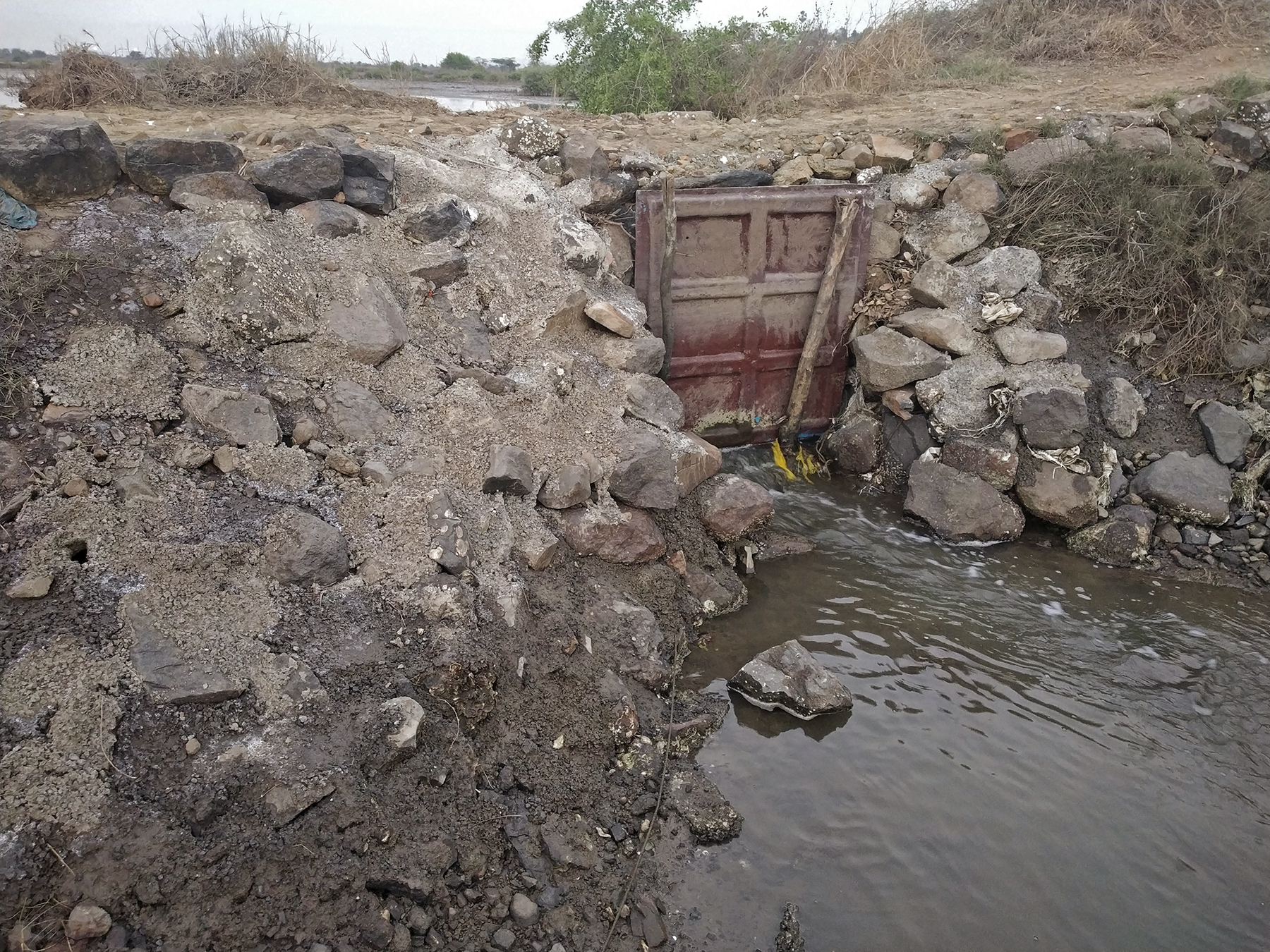 This sluice gate (above) blocked the natural flow of water from the sea to Panje’s shallow waterbodies, rendering what was once a living estuarine area into a dry wasteland (top). But Panje is not beyond repair, if quick action is taken to prevent builders from damaging it. Photos: Aishwarya Sridhar.

A History of Destruction
By Stalin D., Vanashakti 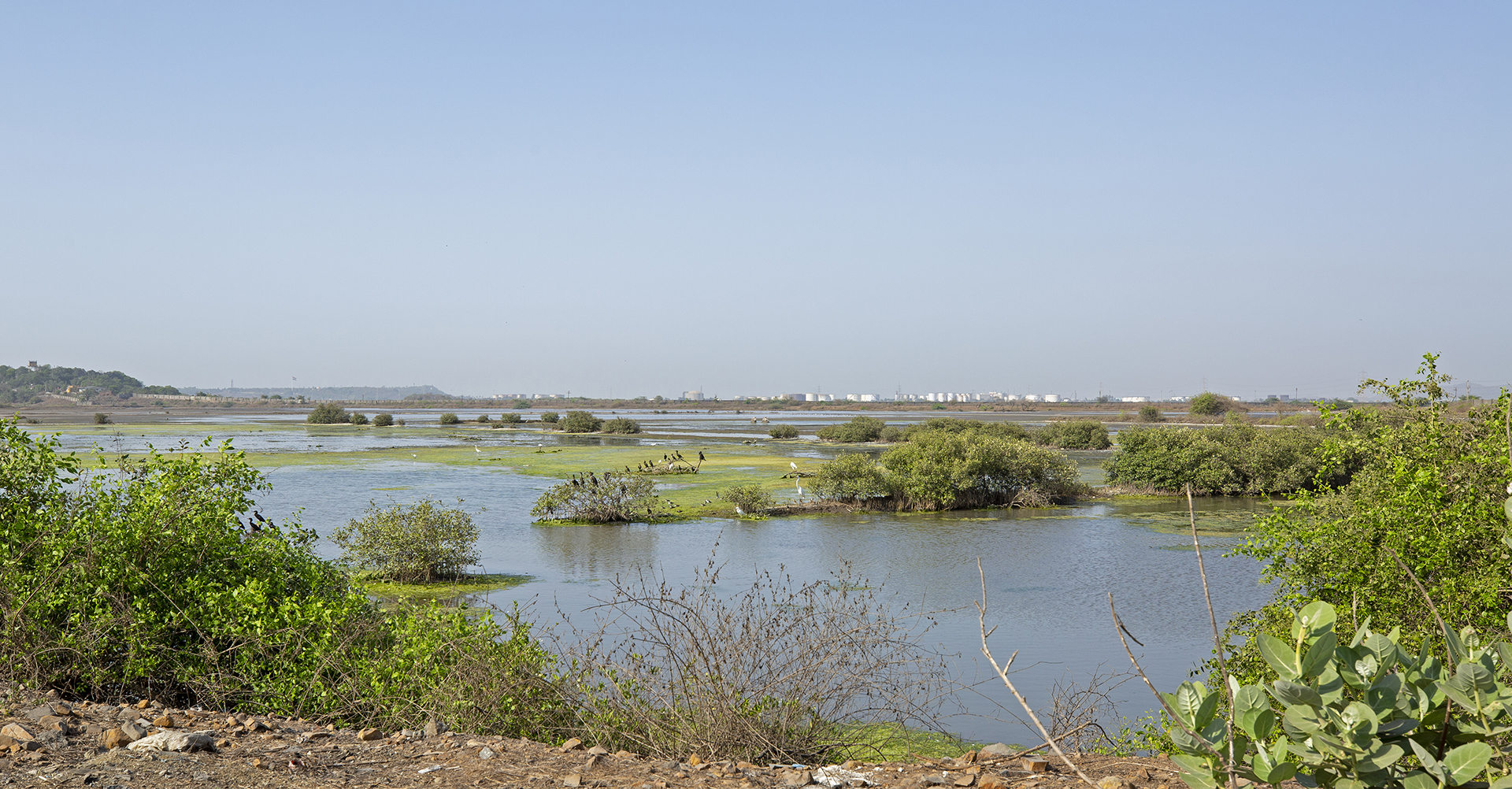 Photo: Aishwarya Sridhar.
Panje is a vast expanse of a low-lying inter-tidal area in Uran taluka of Raigad district in Maharashtra. It is bordered by the fishing villages of Panje, Phunde, Bokadvira and Dongri. The entire site is adjoining a creek and was used extensively for salt manufacturing. Part of the land was also used to cultivate paddy in the monsoon, a common feature in many coastal areas. Artisanal fishermen make a living at this site.

At a time when environmental laws such as the Coastal Regulation Zone (CRZ) notifications were yet to evolve, CIDCO acquired massive land parcels of thousands of hectares in Raigad and Navi Mumbai. A development plan made in 1980 demarcated various areas as Development Nodes, such as the Dronagiri node of 2,740 ha. This area, which lies three metres within the High Tideline, witnessed massive reclamation activity. The CRZ notification that came into effect in 1991 prohibited the reclamation of mangroves, intertidal areas and waterbodies, but this did not stop CIDCO from continuing with its construction plans without CRZ clearances. Almost without let or hinderance, land use changes were implemented periodically. Fishing zones were turned to industrial use at great cost to the community. Walls were built without permission and plots demarcated near Panje, in Dronagiri. A huge dam requiring 72 sluice gates was erected at the creek mouth. For eons, tidal waters and mangroves played their respective roles in maintaining the ecologically productive habitat, but now this control was left in the hands of hydraulic engineers, who took their instruction from politicians. Blockage of tide water without express permission is an offence, normally issued for flood control. Dronagiri’s flood waters normally collect at Panje, where water is retained until the tide recedes. But the sluice gates prevented tidal waters from entering during the monsoon. What was once an open, living estuarine area had completely dried up. Subsequently, low-lying areas in the vicinity of these villages were reclaimed by CIDCO, and consequently tidal waters now inundate the afflicted villages even away from the monsoon season. That’s not all. CIDCO went one step further and sold parts of Panje to a private developer,  ostensibly to create an SEZ that has not seen the light of day even 15 years later.

Eventually in 2013, the Maharashtra State government agreed to change the land use from SEZ to residential! This meant that residential towers could come up after reclamation. A stop work notice given by the Maharashtra Coastal Zone Management Authority (Environment Department) was ignored and work continues apace. Such illegalities are going to make it difficult for Navi Mumbai to cope with the worst impacts of climate change in days to come. The Panje wetland is home to thousands of birds when tide water inundates the land. Reclamation for the Navi Mumbai International Airport has added to the potential risk of future floods because thousands of hectares have been damaged, displacing huge populations of avifauna… the original maintenance engineers of this critical habitat.

As a mitigation measure, it was suggested that a mangrove park would be set up. Any such thought was rejected by the project proponent, which predictably wanted to dissuade avians to prevent bird hits to planes. Effectively, the clearance to the project was granted, knowing full well that airport and birds sanctuaries make poor bedfellows. The mangrove park, a specific environment clearance condition, appears to have been a smokescreen. Nearby waterbodies and low-lying areas were identified as possible alternative sites to help the displaced avifauna cope with the loss of habitat. Panje is one such site recommended by the BNHS (the agency appointed) to be preserved and protected as a sanctuary.

Data logged by the BNHS includes 31 migratory, six of which are ‘Near Threatened’, one ‘Vulnerable’ and 45 nominated as ‘protected species’. Such data is evidence enough that the site was biologically rich and a vital, thriving wetland. What is more, the habitat was known to be vital to the prevention of floods for Dronagiri and its nearby villages. And, the area was declared a No Development Zone. This is no way to look after the interests of Navi Mumbai’s current and future citizens. Protecting ecosystems is not an act of charity, it is a survival imperative.