The Versatile Hornbills of Mumbai

Rewilding urban cities is going to be critical to our climate resilience in the difficult years ahead. Two of India’s finest naturalists unite to present Sanctuary readers with a glimpse of hope for better tomorrows. Saurabh Sawant, shares his knowledge of hornbills... after being inspired by images taken by Darshan Khatau, from his balcony in Malabar Hill, Mumbai.

Around mid-2012, when I was studying the dragonflies and damselflies of Sanjay Gandhi National Park in Mumbai, I would often explore the park during afternoons when there is little birding activity. One summer, while walking along a blind bend on the popular Shilonda trail, a bird almost crashed into me, surprising both of us. It was an Indian Grey Hornbill Ocyceros birostris that managed to maneuver a sharp left at the last moment, and disappear into the foliage. I was stunned as I felt the wind from its wing hit my face. I rushed after it into the forest, and a few metres from our encounter, found it perched on a bare tree branch preening itself. I hid behind a tree and observed, wonderstruck, for some time. It’s a memory that will be forever etched in my mind.

Hornbills are truly marvelous birds. My earliest memory of them is during school summer vacations spent at my maternal grandparents’ quaint ancestral home on the banks of the Gadh river in Sindhudurg, Konkan, Maharashtra. A few metres from the house was a massive fig tree that would fruit in the summer. In a child’s imagination, it was probably laden with more Malabar Pied Hornbills than fruits. I spent hours not just looking at their antics and listening to their cackling laughs, but being amazed by their wingbeats as they took off, slicing the air with their large wings. Little did I know then, that I would keep meeting a member of this incredible bird family, the Indian Grey Hornbill in my bustling backyard – the city of Mumbai.

Hornbills belong to the family Bucerotidae, characterised by the casque most species have on their bills. They are usually large, with long and decurved beaks sporting elaborate casques and colourful bare skin around the head. The sexes are generally similar, but eye colours may differ. There are 14 genera and 59 species in this family that inhabit a variety of habitats in Africa and Asia, most preferring humid rainforests with large trees. This inclination makes them some of the most important indicators of forest health. This also makes them vulnerable to landscape and other anthropogenic changes. Habitat destruction has put 24 species at risk, mainly due to indiscriminate logging, intensified by local hunting. 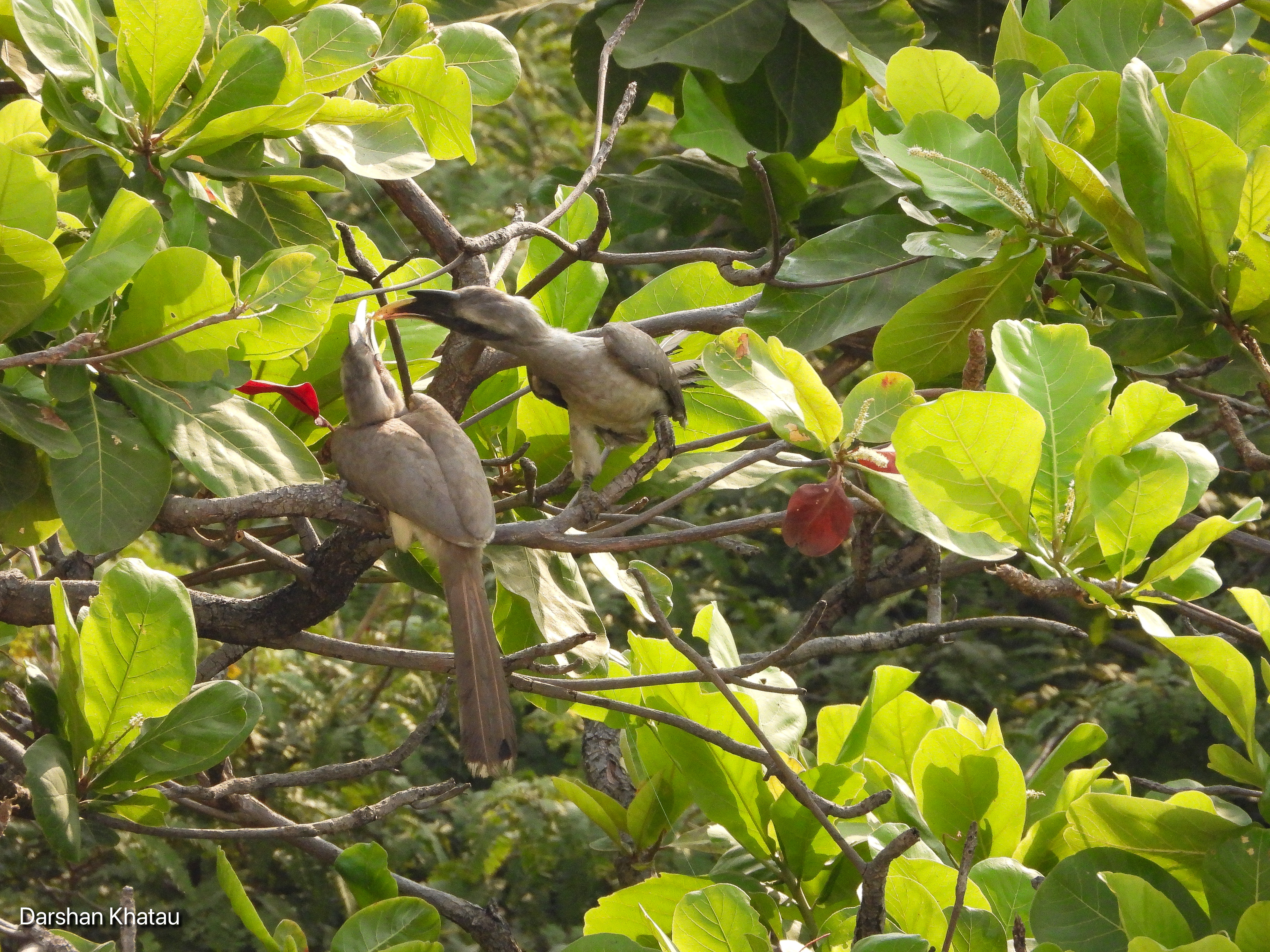 The Indian Grey Hornbill belongs to the genus Ocyceros, which literally means ‘pointed horn’. The species name birostris means ‘two beaks’, perhaps since both the other Ocyceros species, the Malabar Grey Hornbill and the Sri Lanka Grey Hornbill, lack the prominent casque (among other differences). All three are small and mainly grey, black and white. The Indian Grey Hornbill can be easily differentiated by the casque, which is present in both sexes, but more pronounced in males. The male sports a blacking bill, narrow casque, and red-brown eyes, while the female has a smaller, less prominent casque, with browner irises. Unlike the Malabar Grey Hornbill, the Indian Grey prefers drier habitats and is found through most of India, and along the Indian border in parts of Pakistan, Nepal and Bangladesh. This makes it a subcontinent endemic. It is mainly found around deciduous woodland, and open thorn-forest, and in areas of cultivation or gardens. It is generally resident, except for some local movements to keep track of fruiting trees.

Indian Grey Hornbills are omnivorous. They prefer small fruits, especially figs, but will readily feed on a variety of insects, lizards, mice and nestlings of the common city birds such as Indian Mynas and Rose-ringed Parakeets. They predate on the chicks of such cavity nesters, throwing them out of their nest lining before taking over. This adaptability has allowed them to colonise areas even close to human habitation. Most other hornbills are specialists and therefore endangered.

Like all hornbills, these cavity nesters have a unique nesting habit where the females seal themselves into the cavity to incubate and brood the chicks. The courtship lasts over a month, and the pair visit nesting cavities and defend them from other cavity nesters. During the courtship, the male often presents the female with prey and other food items, with the pair indulging in playful behaviour.

The female preens and stops foraging as she prepares to confine herself, while the male assures her of his abilities by feeding her and parading his skills around the nest. Both prepare the nest by cleaning it, creating the wall lining, and undertaking repair work. When the female is ensconced inside the cavity – now a potential nest, the male brings all other necessary nesting material. The female then seals the nest entrance with her own faeces, food and bark fragments. The male may also deliver mud pellets.

The egg-laying usually happens toward the end of the dry season around April. The clutch size is between two and five eggs, but usually no more than one or two chicks survive to adulthood. The incubation lasts for more than 20 days, by which time the female has moulted most of her feathers. She only emerges from the nest about a week before the chicks fledge, in roughly 45 days. The mostly fledged chicks are able to reseal the nest, receive food, and propel their excreta out of the nest slit. Now, both male and female will care for the offspring. Hornbills are generally monogamous with biparental care. Interestingly, males from earlier litters may sometimes pitch in to help. The courtship and nesting of hornbills is such an elaborate process! Yet, they have been able to manage to flirt, breed and survive in a city like Mumbai. There have also been instances of Indian Grey Hornbills nesting in a hole in building walls, in Madhya Pradesh. I believe hornbills are colonising more wooded areas in the city of Mumbai and we must ensure that we protect all their chosen existing green parcels of urbania, and work to create more such refuges for them.

Although more common in human habitations in north India, as Darshan Khatau’s persistent, diligent vigil in Malabar Hill suggests, Mumbai could be blessed by a fair share of Indian Grey Hornbills in the years to come.
And what a blessing that would be for one of the largest metropolises in the world! 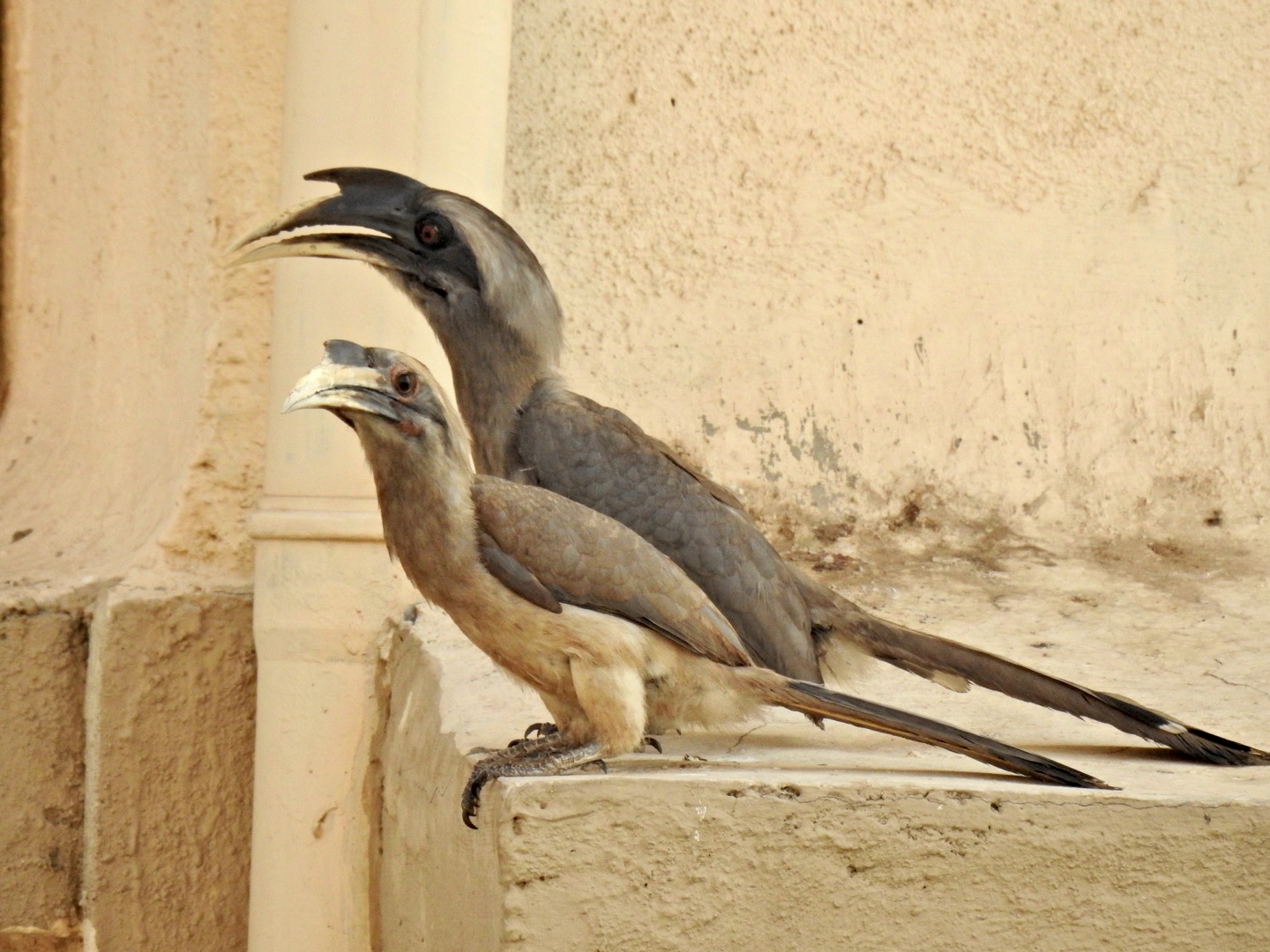